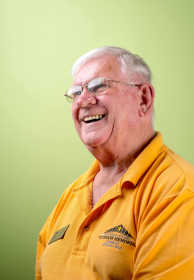 A few years ago, Jim Eddleman was driving around Perry County, Missouri, with architects, looking for a place to build a memorial to veterans. It was part of the fulfillment of a promise he made to himself more than 50 years ago, when he was serving his country in Vietnam: to honor his comrades in some way if he returned to the U.S. The men drove to Eddleman's farm at what is now 1172 Veterans Memorial Parkway in Perryville, and Eddleman thought they were just turning around. The architects, however, had something else in mind: they began pointing to where they could imagine a replica of the Vietnam Veterans Memorial being built, and where museum buildings to accompany it could stand.

"I thought, 'This ain't no joke, I think we're serious,'" Eddleman recalls. "Then we got up and drove on the highway, and they said, 'Well, what do you think?' And I said, 'I think we just found a place for a memorial.' There wasn't no thought about it, it was just an automatic reaction. That's what I wanted."

In that moment, Eddleman donated his 47-acre farm in the service of building Missouri's National Veterans Memorial. The farm had been in his family for three generations; he kept only one acre for the house he and his wife, Charlene, live in. He says it wasn't hard to be this generous; since, he has had no regrets.

"I never thought this place would ever be something that could make something like this out of it," Eddleman says. "I thought it would just be a farm, couldn't be made into a memorial. I could have never imagined that, but I am so proud of it because it's been in the family for three generations. ... I know my grandfather and my uncles would be very proud to see us right now."

Eddleman's grandfather served in World War I, and his uncles served in World War II. Eddleman himself served in the Vietnam War, enlisting at the age of 19, as a Specialist 4 with the 199th Light Infantry Brigade, in 1967-68. He was stationed around Bien Hoa, Saigon, Long Běnh and Tây Ninh.

The promise he made at age 20 has stuck with him throughout the past 50 years, giving life to a remarkable memorial more easily accessible to veterans from across the U.S. through its location in the Midwest. It's been only two and a half years since the memorial first began to be built in 2017, and the grounds already include a full-scale model of the Vietnam Veterans Memorial in Washington, D.C.; a welcome center with a chapel, video room and gift shop; a museum and the Honor Flag Memorial, which pays tribute to veterans from every war or conflict in which America has been involved. And Eddleman and his team have plans to keep building more, as funds from private citizens and corporate donors continue to come in.

Nancy Guth, director of Missouri's National Veterans Memorial, recalls the speech Eddleman gave about his farm and the memorial at the grand opening celebration of the grounds May 18, 2019.

"He looked out amongst the people that were there and he said, 'This is the best crop yet,'" Guth remembers. "[He is] humble. Selfless. It's all about the veterans."

Eddleman dedicates his farm and life to this project, spending time at the memorial each day, meeting veterans who come to heal. While he doesn't do this for recognition, others can't help but notice his deep, authentic generosity: in July 2019, he was honored at the Marriott Hotel in St. Louis with the American Legion's Distinguished Service Award, the highest award for the state of Missouri's organization. He says it was a "great honor" to be recognized for something he just likes to do.

But more important than anything to Eddleman is that veterans are able to visit the wall and find healing.

"When I was in Vietnam ... I had so many young men that was just the same as I was, who came from small communities, small towns, and some of their names are on that wall down there," Eddleman says. "But [sitting at this memorial one day] just reminded me of being in a country setting with that corn back there, and these guys probably all came from family farms. It brings back memories -- the good times and the bad times, too. ... [Veterans who come here] can look at some of their friends on [the wall], sit, reflect and remember, then hopefully they can start a healing process."

Eddleman's wife, Charlene, joins Eddleman each day at the memorial, volunteering, teaching visitors about the wall and talking with veterans.

"I'm glad he could do it because he kept his promise," Charlene says. "It's for all veterans."