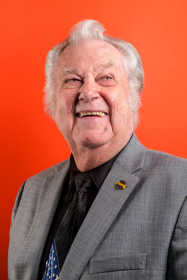 You can't miss the booming voice -- or personality -- of Doug Austin. He's a fixture at any number of area events, be it with his church (Bethany Baptist Church) or community.

After a career in the grocery business marketing products for more than 100 independent stores, Austin made up his mind early on he would retire by age 60. After two stops in Cape Girardeau during his career, Austin and his wife, Fran, knew where their retirement years would be spent.

"We had always said, 'When we retire, we've moving back to Cape Girardeau, Missouri.' And we did," Austin says.

The first person Austin met in Cape Girardeau was former city councilman Melvin Gateley, who proceeded to pull Austin into various community activities. Being under the tutelage of Gateley made sense. Austin wanted to spend his retirement doing one of two things: either get involved in Baptist politics or run for city council and, eventually, mayor. Following Gateley seemed like a win-win either way.

First thing he knew, Austin was meeting the "right people at the right time" and found himself spending more and more of his time serving in the church world. His plan to run for city council and mayor "went to the wayside," but his interest in serving the city never faded.

Austin became friends with Roger Fields, the late former chief of police. It was through this friendship and attending a small memorial service at the county park that Austin's attention was grabbed. This ultimately led to his involved with S.A.L.T., otherwise known as Seniors And Lawmen Together.

"I could get so emotional over law enforcement," Austin says, lamenting the challenges they deal with on a daily basis. "Nobody in my family was ever in law enforcement, but it was such a special thing through the connection with Roger Fields."

S.A.L.T. hosts a few events throughout the year, but the organization is probably most known for an annual memorial service honoring law enforcement officers from Southeast Missouri who were killed in the line of duty.

This year, the memorial service reached a record attendance with more than 400 people on hand to pay tribute to the fallen heroes. Along with honoring their memory, local students participate each year in an essay contest, writing about how police are heroes.

"You don't do these things because they make you feel good," Austin says. "But boy, it sure is one of the side benefits."

Austin points to various individuals in Cape Girardeau who have mentored him over the years. Some, he says, don't even realize it. Roger Fields, for example. One day while on a ride-along with Fields, Austin watched as Fields drove up near an accident. Fields quickly switched from a jovial, fun guy to a serious officer taking charge of a situation.

"I began to watch Roger from a different perspective," Austin says. "I learned something about Roger. Wherever he was, whatever he went into, he was going to make it better."

It was something Austin realized was missing in him. As much as he liked to be involved, he needed to find opportunities to encourage others and, like Fields, to help make things better.

"You don't have to beat folks over the head," Austin says. "But just encourage them."

One of the ways he tries to keep this going is by sending at least 10 cards per week. Email doesn't count, Austin says. He wants it to be personal and make a difference. Sometimes it's sending a note to a family member. Other times it's to someone associated with S.A.L.T.

Why does Austin, now in his 80s, continue to serve his community? It's a calling, he says.

"I think God has a plan for each one of us, certainly, that he'd like for us to do," Austin says. "But then freedom of choice comes in. God, with his infinite wisdom, turned that over to us. I just sensed that, that was what I was supposed to be doing."