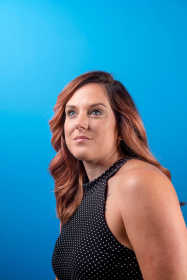 Had it not been for taking an art class rather than a Spanish class in high school, it's quite possible Alyssa Phares might never have made it to Cape Girardeau.

As a senior at her Central Illinois high school -- a school of 34 people -- Phares had an opportunity while on vacation to visit the College of Charleston, which has one of the top-ranked programs for historic preservation studies. Knowing she wanted to pursue historic preservation, Phares was smitten with the school. To explore her options, she also started researching other schools with historic preservation programs.

Through her research, she discovered there was one school within driving distance of her home that offered a degree in historic preservation -- Southeast Missouri State University. She visited Cape Girardeau, took a campus tour and stayed at the Bellevue Bed and Breakfast. She liked the university and the "quaint little river town." But she also liked the College of Charleston, even though it was further away from home.

"I fell in love with it because I always felt welcomed here," Phares says. "And I think that contributed to me enjoying my job now."

After graduation, Phares interned during the summer of 2008 at the Glenn House, providing tours. Then that fall, she started working with the Southeast Missourian, first as an administrative assistant and later as the downtown area sales representative. It's at the newspaper where she cultivated relationships, working to understand how to make a difference for her clients.

In 2012, Phares was approached about an opportunity with the Cape Girardeau Convention and Visitors Bureau, now called VisitCape. In this sales role, she would be tasked with selling Cape Girardeau as a destination.

"I knew after a year that was where I wanted to be," she says. "The industry is always changing, yet constant. ... People are getting experiences now [when they come to Cape Girardeau], whereas before they were getting tours. So we've changed both the language but also what they're getting here: they're not just getting a tour of the Glenn House, they're getting a tea."

Convincing large groups to visit Cape Girardeau and spend thousands of dollars is a challenge she enjoys. And she's good at what she does. With more of the area's economy relying on experiences, it's an important role.

While the historic preservation she studied during college has a connection to her day job, she also volunteers outside of her work hours, utilizing this passion. She serves as vice chair of the Cape Girardeau Historic Preservation Commission and president of the Reynolds House Foundation, which oversees the rehabilitation of the Reynolds House built in 1857. This pre-Civil War structure with its French colonial architecture was constructed according to plans drawn by Edwin Branch Deane, an architect who also drew plans for the Glenn House, among other homes in Cape Girardeau. In 1983, the house was placed on the National Register of Historic Places, and it was added to the Cape Girardeau Historic Preservation Commission's endangered buildings watch list in 2014.

As president of the foundation, Phares has played a key role in the landmark's rehabilitation process.

"The goal of the Reynolds House is to get it completed so that instead of being an eyesore in the Red Star District, it's a place where that district can feel a connection to the community," Phares says.

Phares hopes the house will be finished by winter. Once completed, it will be a rentable space for small events and meetings, and the hope is to use it as a location for exhibits and galleries focused on historic presentation.

Phares helped with the local Endangered Buildings List in 2012, which was drafted to shine a light on historic properties that need attention. For her master's degree in 2011 at the Savannah College of Art and Design, she was able to get the Broadway Theatre on the National Register of Historic Places. And while in college, she also successfully got the bridge in Old Appleton on the National Register of Historic Places. She recalls driving up to Jefferson City, Missouri, with Apple Creek, Missouri, residents to defend the nomination.

One thing is sure: with any project she commits to, she has to be passionate about it.

"You find something you're interested in. If you can't make that your full-time job for whatever reason, find ways to connect to that outside [of your job]," Phares says.