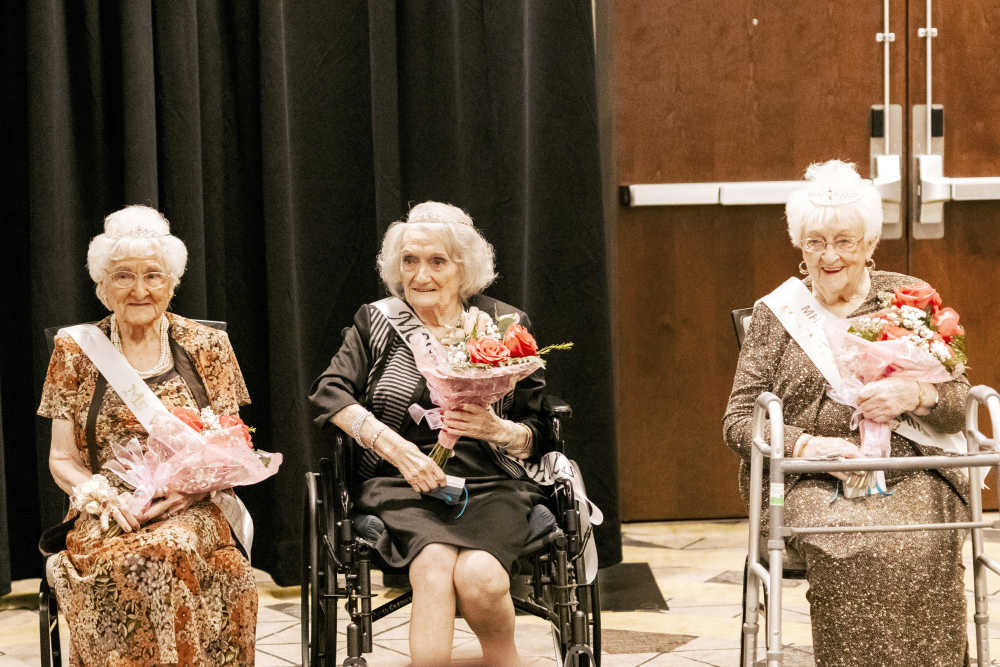 Maureen Lea grew up in England during World War II. She remembers using blackout curtains to ensure her and her family’s safety during the war. When she was 18, Maureen joined the Women’s Land Army and met an American soldier, Richard Lea, while he was deployed. The two were married in England and then moved to America shortly thereafter. Richard and Maureen were married for 50 years and had six children. 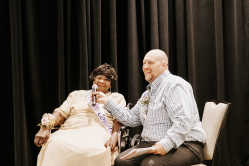 Why did she marry this American? 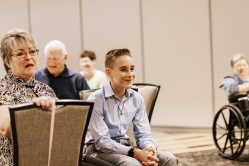 “I couldn’t help it, I was in love with him!” Maureen shared with judges and the audience at the Missouri Health Care Association Nursing Home District 5 Pageant. The pageant took place at the Drury Convention Center in Cape Girardeau June 14; Maureen’s story had judges fighting back tears. 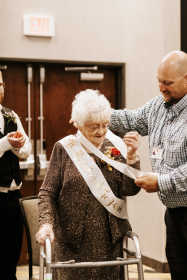 “This event is exceptional because the ladies have the opportunity to share about their life and what they have experienced,” said Sharon Cathcart, volunteer coordinator at Crown Hospice. “It’s heartwarming because their families and caretakers are with them, and they get to represent their facility they reside at. It’s like Christmas for them. It’s truly a special day.”

Emcee Jay Cagle, the Missouri Health Care Association representative and community educator and respiratory therapist at Legacy Hospice, asked the 10 contestants questions based on their biographies. The judges then scored them on personality, best smile, outlook on life and the current activities they are involved in at their residing facilities.

Mary Salena Clubb Francis, 97, from Woodland Hills in Marble Hill, Missouri, received first runner-up. Francis discussed the amount of gratitude she has looking back on her life. She’s had many accomplishments; one is that she had a span of 50 years during which she did not go to the doctor’s office.

“I’ve had several high points in my life, but I feel lucky that I was able to accomplish the three things on my bucket list,” Francis told the judges and audience at the pageant. “I saw the ocean, I flew in a jet plane and I climbed Pike’s Peak, where I felt close to God.”

In addition to these unique experiences, Francis has three sons, three grandsons and five great-grandchildren, all of whom she is immensely proud.

Another contestant who shared how special her family was to her was Dorothy Credile, 90, resident at Westwood Hills Health Care Center in Poplar Bluff and second-runner up in the pageant. Credile used to work at the Butler County Sheriff’s Department, where she traveled as far as Eugene, Oregon, to transport female prisoners.

When asked what makes her the most proud, she told the audience and judges, “My most favorite times are spending time with my boys and watching them grow up into such wonderful, hardworking men.”

“This event is truly heartwarming,” said Gay Hartness, pageant coordinator and administrator at Heartland Care and Rehabilitation Center. “I love that [the contestants] are coming to a special event just for them. Most of these women have worked hard and raised kids. Life was harder for them back then, like washing clothes by hand. We have it so easy these days. Some of these ladies have been through the Depression and lived through World War II and the Korean War. I have so much admiration for them.”