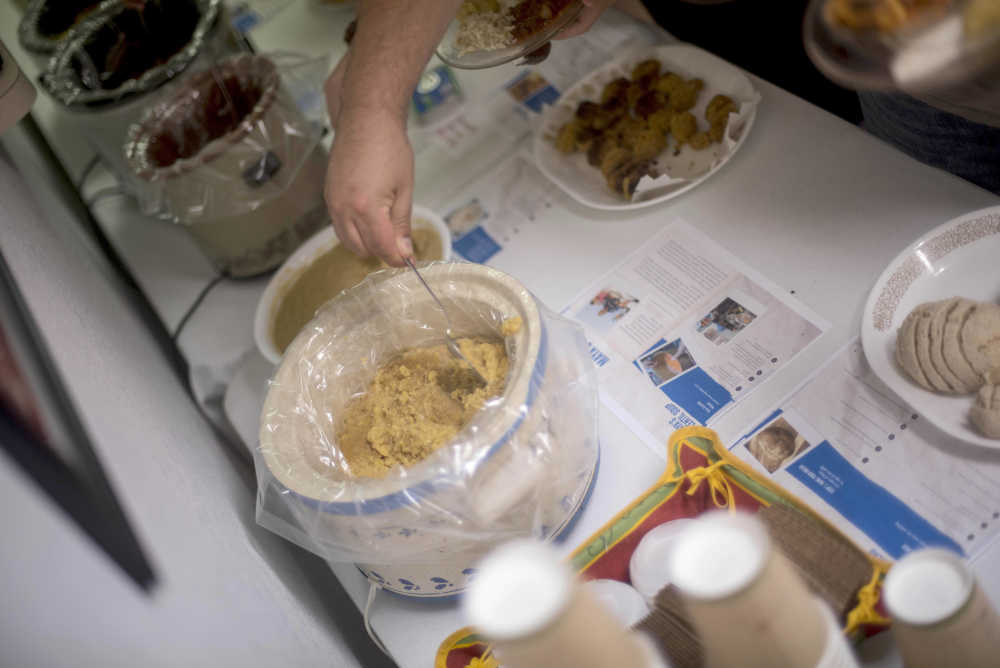 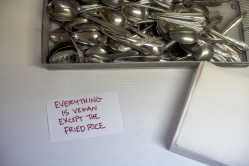 Cutlery is seen near a disclaimer at the start of a refugee-style food buffet Wednesday, June 19, 2019, at Cape Girardeau in Abbey Road Christian Church.
TYLER GRAEF ~ tgraef@semissourian.com
Order this photo

There are more than 665,400 Syrian people living as refugees in Jordan refugee camps, according to the United Nations’ Refugee Agency UNHCR; this is the diet many of them eat on a weekly basis at one of those camps. And it’s what Rev. Doug Job, transitional minister of Abbey Road Christian Church in Cape Girardeau, ate for the week of World Refugee Day, June 16-23, in Cape Girardeau. 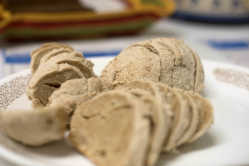 It was part of the Christian international aid organization Church World Service’s Ration Challenge, which more than 40,000 people have taken part in across the world since the program’s inception in 2014. The program’s goal is to raise awareness of and funds for Syrian refugees in a camp in Jordan while eating in solidarity with them. Job found out about the challenge through Church World Service’s website; when he shared the program with a few people at his church, the outreach chair challenged Job to participate. Job accepted the challenge. 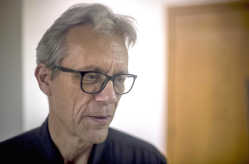 As a participant in the challenge, Job committed to eating only the food in the ration package for a week, sharing with people about the situations refugees live in and raising funds with others’ help. Each meal Job ate consisted of approximately 300 calories, consistent with the amount of calories many refugees intake at each meal in the Jordan refugee camp the program benefits.

“Anytime I ‘suffer’ a little bit at all, I think what it must be like to live like this all of the time, waiting for the rest of the world to make a place for me,” Job said. “And then it’s easy.”

The cause was one Job felt passionately about, so he also invited others into it: Rev. Edie Bird, rector at Christ Episcopal Church in Cape Girardeau, and Abbey Road Christian Church Member Jamie Koehler also decided to participate. As an avid gardener and eater of fresh food, Bird said the biggest challenge for her during the ration week was not being able to eat familiar food. As a result of not being able to eat fresh foods, she said throughout the week she felt her energy was low.

“I’ve felt very sad as I’ve thought about people having to do this for long stretches of time when they’ve lost everything else, because food and home are really linked,” Bird said of her experience with the ration challenge. “When you’re away from home, the thing that you most want is some food from home. … I’m just a lot more aware of this during this week, that this is going on around the world.”

Job didn’t stop with inviting other people to participate in the challenge; he also hosted a community dinner comprised of foods made from refugees’ recipes from the camp. For the dinner, he made mujaddara, a lentil and rice stew; fasoulia, spiced kidney beans and tomatoes; fried rice with sardines; lentil soup; falafel and hummus without spices; flatbread and rice milk bread. Then, he invited the community.

Judy McLain, member of Abbey Road Christian Church, attended the refugee dinner to better understand “away from the politics” how lives are being affected in her own community and throughout the world by war and politics. She said she realized she cannot fully understand what people who are refugees go through because she could “walk away” from the meal and have access to any food she wanted.

“When everything’s easily accessible, you don’t think about that kind of diet,” McLain said. “Of course to us, [the food tastes] bland. I cannot imagine having that day after day with the lack of taste and no variety and what you have to do with it to try to make it a meal.”

While the foods were bland, Job said throughout the week he “fell in love” with flatbread; it was a staple food he ate for midmorning and afternoon snacks to help himself make it to the next meal. He said eating foods like the flatbread for a week in the amount that refugees eat gave him both heart understanding and head knowledge.

“I want to be a more generous person,” Job said of how he hopes to continue living post-challenge. “Because I’ve been overwhelmed with generosity of people who have given [to the Ration Challenge] because I asked them to. And they’ve given a lot more than I’ve asked them to. I asked some friends, ‘Would you give the price of a fancy coffee drink?’ and they gave enough to feed a refugee for a year, instead.”

If that is the “heart thing” Job said he learned, there is also a “head thing” he realized while participating in the ration challenge.

“I think this is making me a little more sensitive to the difference between abundance and affluence,” Job said. “I really think life’s designed for abundance. Ecosystems work that way. There’s a place for everyone and a place for everything. And it’s a constantly dynamically-adjusting balance, but that’s how it’s supposed to be, and when things are working right, that’s how it is. But things are really out of balance in our world, so we’ve got some pockets of tremendous need and some pockets of some tremendous affluence. And affluence is when we have so much abundance that we lose sight of the distinction between want and need. But what affluence should tell us is, ‘Hey, things are out of balance, and we need to help right that balance.’ So I want to keep paying attention to that.”

Interested in giving in support of the Ration Challenge?