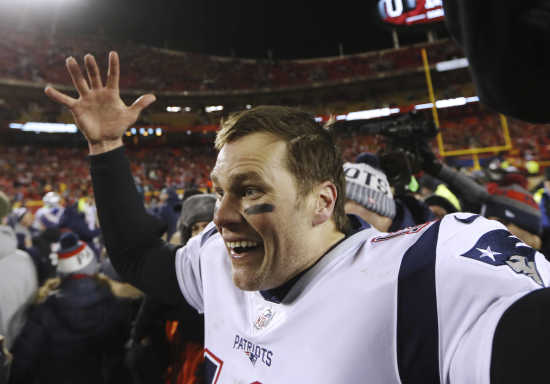 Who do you want to win the big game? The diabolical owner or the Grumpy Lobster Boat Captain?

When the Rams left St. Louis, I turned off NFL football: cold turkey. That meant stopping the fantasy football I'd played for eight years -- and not watching a single game in 2017 and 2018. Actually, I watched part of one game: the initial, totally Jeff Fisher mistake-prone, self-inflicted drubbing that marked the first game of the new Los Angeles era. Schadenfreude is not something I usually enjoy, but in this case, it was delicious! How easy it turned out to be to let football go. My Sunday afternoons (not to mention the occasional Thursday, Monday and end-of-season Saturdays) blossomed into time to be with family (or to catch up on work), oftentimes hiking. With four girls growing up, it became a pleasure not to have to worry about submitting a line-up, making trades or adding and dropping players before the game-time deadlines. And, the ethical dilemma of supporting a sport where too many of its players abused women -- or its own players risked horrifying brain injury -- gone!

I also, blessedly, didn't have to worry about going to the games in St. Louis, where our company held tickets for the 21 years the Rams were there, and which had become increasingly sad affairs, thanks to the ineptness of ownership. Only, maybe it wasn't ineptness: In the mold of every vain, greedy sports villain in the movies, Rams owner Stan Kroenke simply had a long plan to return football to Los Angeles, no matter what was told the public (a fact glaringly obvious in hindsight when the NFL owners relocation committee voted NOT to support the franchise's move to Los Angeles but the team moved anyway). And to accomplish that move, for Kroenke, it meant losing, destroying the fan base, and making a mockery of a city that had showed up through coaching malpractice for years. The Rams didn't have a winning season their last 12 in St. Louis, posting an overall record of 64 wins, 127 losses and one tie. And yet the fans persevered.

Then came this year and the wunderkind QB Patrick Mahomes to the Kansas City Chiefs. I started watching some highlights on YouTube, which amazingly shows an entire NFL game in about 12 minutes (sans commercials and non-productive plays). To be honest, I also blame Donald Trump, Nancy Pelosi and Chuck Schumer for my return to the NFL. When politics becomes so nasty and inane, sports can be a wonderful distraction (especially when players stop political grandstanding and actually stand for the anthem). And the Chiefs were a "local team" I could support in full. Fun. Young. Creative. Then, to cap things off, I caught the flu. And for the first time in three years, I watched a game live on television. The Chiefs, in electric style, overwhelmed the Indianapolis Colts. Mahomes was amazing. The much-maligned Chiefs defense stood tall.

Could it be: A Super Bowl between the Chiefs and the Rams, now resurrected under coaching phenom Sean McVay? As Super Bowl champs, for Missourians, the Chiefs could restore some good feeling about the NFL. How sweet it would be to see the Rams make it to the big game only to lose to a more dynamic offensive juggernaut. So, I watched the two games this weekend. (Or most of them.) And that's when the nightmare set in.

Yes, the Rams won. But they won benefiting from the kind of awful officiating that was usually against them in St. Louis. Poor New Orleans Saints, who would have won the game except for maybe the worst non-call in NFL history. It was so bad the NFL's head of officiating called the Saints coach after the game to apologize.

But worse, the Chiefs lost (in heart-breaking style), and not just to any team. They lost to the evil empire, helmed by the Grumpy Lobster Boat Captain Bill Belichik, and maybe, besides Kroenke (and NFL commissioner Roger Goodell), the person most responsible for the demise of football in St. Louis. How else to interpret the chain reaction of the Rams Super Bowl loss to the New England Patriots 17 years ago when the Patriots illicitly videotaped the Rams pre-game walk-through and bent the rules in the Big Game, the Grumpy Lobster Boat Captain rightfully predicting the NFL would not want to constantly disrupt game action by throwing endless penalties against his mug-the-receiver tactics. The loss -- and videotaping, etc. -- led to the breakdown of Rams coach "the mad scientist" Mike Martz and the eventual departure of Hall of Fame, beloved, quarterback Kurt Warner. The St. Louis Rams were never the same. Kroenke bought the team. And now they're in Los Angeles.

So, what to do? Watch the game? Or skip it? Root for the dynamic young coach, Sean McVay, who could put stakes through the hearts of Belichik, the greatest quarterback of all time Tom Brady, and Patriots fans everywhere? Or root for Brady and his incredible long-term excellence against the evil villain Kroenke? The Chiefs could have saved us all from such a choice. Maybe next year. In the meantime, thank goodness for YouTube. February 3 is going to be a great day for a hike. Or, maybe: watching commercials.

View 11 comments or respond
Community discussion is important, and we encourage you to participate as a reader and commenter. Click here to see our Guidelines. We also encourage registered users to let us know if they see something inappropriate on our site. You can do that by clicking "Report Comment" below. Our goal is to create a place for robust and civil discourse about our community, state and nation.