Interview: Jason Smith, and his views of the president 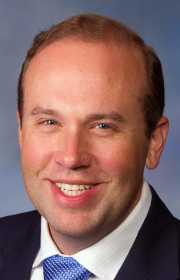 If you've ever heard 8th District Congressman Jason Smith talk about President Donald Trump, you know there's much affection and admiration there. Smith stopped by the Southeast Missourian's offices to talk to the editorial board Friday after the Cape Chamber's First Friday Coffee. He was excited about the president coming to Cape Girardeau on Monday evening for a rally: the last campaign event before the midterm elections. No matter what side of the political aisle you lean, to have a sitting president visit is historically large, especially in a city of fewer than 40,000 people. It's only happened three other times in Cape Girardeau's history with visits by presidents Taft, Reagan and Clinton.

When Trump was first scheduled to appear in Cape Girardeau in September -- before the visit was derailed by Hurricane Florence -- more than 40,000 tickets were requested. The Show Me Center can hold barely a fifth of that, so if you're planning to see the president tonight, the recommendation is to arrive early.

To Smith, having the president visit has been a goal of his since first meeting Donald J. Trump. And over the past two years, Smith has had the opportunity to meet privately, even one-on-one, with the president several times, with the initial meeting focusing on the importance of eliminating "burdensome" regulations. Smith points to dozens of "major achievements" by Trump, but eliminating regulations is clearly one of his favorites.

We covered a lot of ground in the interview and quite a bit in policy detail, of which Rep. Smith has a keen grasp. For this column, though, with the president approaching Cape Girardeau, let me share some of the more "behind-the-scenes" tidbits. I've put Smith's quotes in quotation marks, but should point out that each paragraph did not necessarily follow directly from the one before it. Oftentimes, we went into more detail. The quotes are highlights from the conversation.

When the president canceled the previous visit, Smith was concerned another one wouldn't be scheduled. But Trump's staff kept saying the president wanted to visit, not to worry. They originally planned to return the next week, but the Show Me Center wasn't available due to a gun-and-knife show. Smith's attempts to schedule the event at the airport were rejected. Instead, to Smith's chagrin, Trump went to Springfield.

"Just to have a sitting president come to a community of 38,000 is pretty special," Smith said.

"A lot of people in Missouri will never see a presidential motorcade, and Trump loves looking out and waving at those along the way," Smith said.

Smith told about the time when he was in the car with the president, "just the two of us in back," on a 20-minute drive from downtown Kansas City north to the airport.

"The president, he's engaged, and he's funny," Smith said. "A group of people along the road gave the car their middle finger. The president quickly told me, 'Jason, that's for you.'"

"You never know what he's going to say."

"In meetings, he's pretty incredible to see in action. He's highly engaged, always asking questions. Whether that's his background as a businessman, he wants to get your thoughts. He listens intently, and it's like he has a photographic memory. He remembers what he likes."

"A lot of presidents are shielded from the outside news. He's constantly watching the news, reading the headlines. He's not held back from it."

"He's taken on big issues: the largest tax cut in the history of the nation. The president was engaged with that. I've never worked with an executive so engaged, whether at the state level or in the White House. (President Barack) Obama came to Capitol Hill once to meet with Democrats while I've been in Congress, and he never met with Republicans. Trump is constantly calling and meeting."

"With the tax cut, Trump was articulating questions in detail."

"People who are on TV saying the president doesn't know what's going on, they haven't talked with him. They don't know him. He's incredibly knowledgeable."

Smith ticked off some of the president's accomplishments, starting with Trump simply "disrupting Washington like it's never been," addressing controversial issues, including regulation and tax reform. As a result, Smith said, the economy is booming and unemployment is at a historic low.

"It's only been below 4 percent nine months, and four of those months are under Trump. We have more people working now than in the history of our country."

Smith identified that Trump doesn't hold back. "When he sees something, he calls them on it."

"There are a lot of presidents who would have walked away from [Judge] Kavanaugh [because of the political heat], but he stood with him. He's appointed two Supreme Court justices now and more judges in his first two years than any other president. His legacy with judges is big stuff."

"At the beginning of the year, I thought we were heading to war with North Korea. Not now, thanks to the president. I don't trust North Korea, but at least there is some kind of progress."

"Other presidents made promises about moving the American embassy from Tel Aviv to Jerusalem, he followed through."

"He keeps pushing on immigration reform. I do believe something will come. Same with his infrastructure plan, the president keeps pushing."

"Deficit spending is a problem. More than half of that is interest on our debt, which doesn't do us any good, there's nothing productive there. However, our revenues have increased. We have more revenue now than before the tax cuts. That's not the cause of the deficits."

"I don't always support the president, and I was the only member of leadership to vote against the spending bill. But he's got a lot of big things done."

The tariff war, Smith said, has been tough on farmers. But he said, Trump is committed to them, trying to "make the best agreements possible." But it takes time, and Trump told Smith, "The last thing I need is to have politicians nipping my heels."

Smith told the story of being at a meeting where the only media in the room were C-SPAN and China TV. "China watches everything," Smith said. "When a senator said that his biggest fear was a potential tariff on soybeans, the next day China announced a tariff on soybeans."

"The president wants to get where there are no tariffs at all. But it's a complicated process."

"Our farmers are supporting Trump through this turbulent time because they understand the gain that can come in the future. India is subsidizing their rice and flooding the market, for example, which impacts our pricing. American farmers will win every time if its free trade. So they trust that it will be a better day in the future with good deals, but everyone, and every politician, wants the good to come sooner rather than later."

"I think we'll see more and more bilateral deals. NAFTA 2.0 will be filed the last day of the current Mexico president's term, per agreement. It is already having a real effect, for example, Missouri is a major producer of milk, which is addressed."

"This will also help Mid Continent Nail [because of how product can flow between Mexico and the United States]. But we shouldn't forget Magnitude 7 [Metals] is back in business because of Trump's policies. That's more than 500 jobs in Southeast Missouri, and it's expected to grow to 900."

The Trump rally is scheduled to start at 9 p.m. Whether that's when the speakers before Trump begin or it's when the president starts, Smith wasn't sure. "The president is usually punctual," Smith said. The only time Smith said he's been at a presidential event that started late was Thursday night, in Columbia, Missouri. "He started 40 minutes behind schedule." After the speech, Smith drove the two hours from Columbia to his home in Salem, Missouri, then rose early to make the chamber event in Cape.

Tonight, President Donald Trump will be coming from speeches in Indiana and Ohio earlier in the day. "I just hope he doesn't lose his voice," Smith said.