My wife, a community and the runners who make a difference 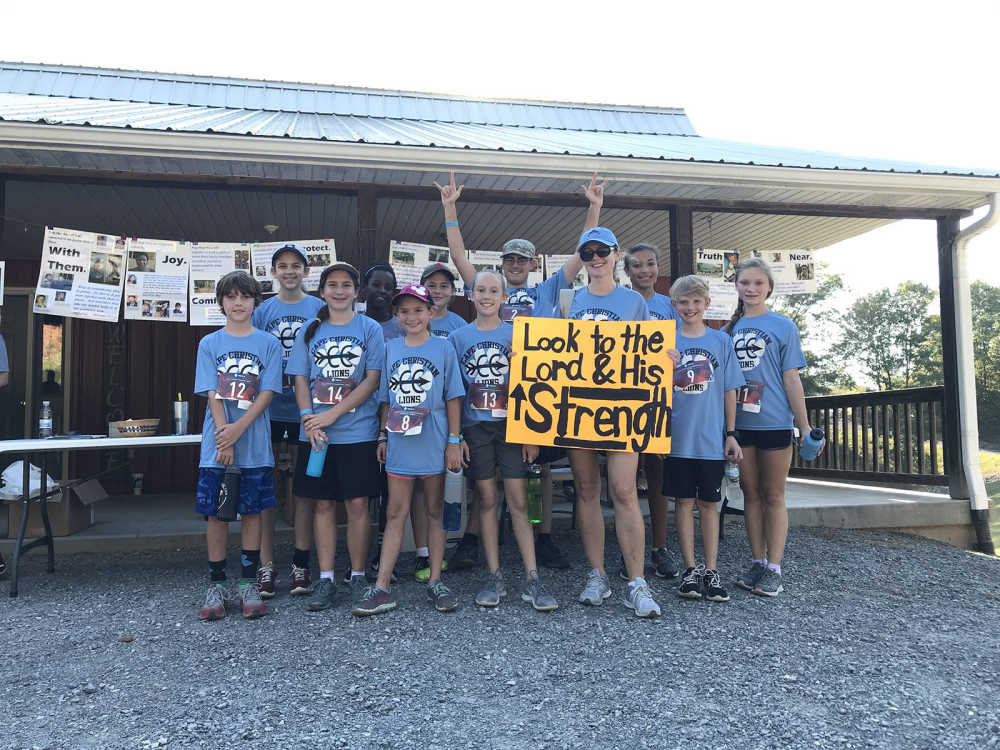 My wife hasn't been a runner since high school, which makes it remarkable that this fall she became a middle and junior high school cross-country coach. Impressively, like all that she does, she poured herself into her responsibilities with gusto: searching online for best practices and coaching tips, and querying friends who competitively race for their insights. And, she began running herself. Last Saturday she ran her first 5K as part of The Unforgettable Perseverance 5K Challenge to benefit persecuted Christians in North Korea. Her team of young boys and girls placed in six categories, including top female runner.

Today, I want to skim a few different topics: the strength that comes from community, passion and awareness; the plight of believers in closed societies; a golf tournament where you can help. I'll also update you briefly on an inspiring story taking place in Cape Girardeau, and that's the love-guided perseverance of Cape Christian School, now independent and renamed: Cape Christian Community School.

Victoria wasn't seeking to become a cross-country coach. She prefers power walking. But with Cape Christian smaller in size, watching its budget, and parents who'd volunteered before juggling their own responsibilities or "graduated" with older children, she decided to step up.

I can tell she's loved it, thanks to the kids, who are quick to follow directions, support each other and continually press to become better. Since the first practice the team has doubled in size, too, in part because of the camaraderie, in part because the coach is a natural recruiter. Unfortunately (or not), because the future of Cape Christian was in doubt earlier this year, meets were not scheduled and other schools' calendars became filled. So, to give the kids experience in competition, their coach has been scheduling them for community events.

On Saturday, they not only gained the physical experience, they learned from Kim Holman, Janine Pfanstiel, Andrea Thomason and others about those persecuted for their beliefs in North Korea and other closed societies. Prayers were lifted up after the race, literally, as runners wrote messages on sky lanterns and released them into the air. More than $2,700 was raised by the event, with all of it, thanks to donations to cover organizational costs, led by Walter Norris, going to help those in need via the group The Voice of the Martyrs: "Remember those in prison, as if you were there yourself. Remember also those being mistreated, as if you felt their pain in your own bodies." Hebrews 13:3. Bethel Assembly of God, LaCroix Church and Grace Methodist also supported.

There is something humbling about seeing so many people step up and volunteer because a need exists. It's humbling to see my wife do that, and to see so many people at Cape Christian volunteering and engaged in powerful ways -- cooking chili and baking cakes, designing and selling discount cards. Parents, teachers and administrators are dedicated to creating a non-denominational home for Christian education. Of course, at all schools, public and private, the spirit that truly lifts programs is service and volunteering, and we are blessed in this area to have countless individuals who do that. Parental engagement. A teacher's love of children! If you do that where you are, thank you.

If you're not involved, here's one place you might consider, especially if you like to play golf or can just donate. Cape Christian needs your support. And next Monday, Oct. 15, organized by Principal Carroll Williams and a team of parents and board members, it's hosting a four-person golf scramble at Kimbeland Country Club. Lunch at 11 a.m. Tee time at 1 pm. Individual golfers: $75. Teams: $300. Tee sponsors (your name posted): $100. For more information, call (573) 335-8333. Or send a check to: Cape Christian Community School, 2911 Kage Road, Cape Girardeau, MO 63701. It's tax deductible.

If you're retired and don't have anything on your schedule, the weather forecast is cool and comfortable. The school could use your help.

For those who read the Southeast Missourian regularly, you're aware of how many people volunteer and serve. It's something we strive to cover. And yet, there is so much more going on than we can do justice to. It's what makes living in this area special. Not criticizing from the sidelines, not waiting for someone else to pick up the baton, but grabbing it yourself when you see the need. Whether in North Korea, on the cross-country trails or at a golf tournament to help a Christ-centered, local school. Think of what you can do -- and act. All help appreciated.

Jon K. Rust is publisher of the Southeast Missourian. He has four girls at CCCS, which they lovingly also call the Chocolate Chip Cookie School (CCCS).