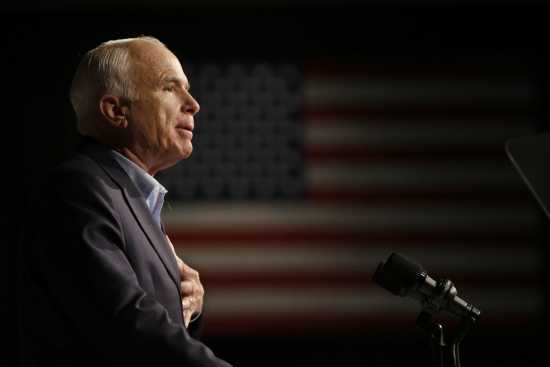 I've been lucky to meet a few presidents -- and more than a few presidential candidates. One of the most tense encounters was being in the audience when Democrat presidential candidate Sen. Gary Hart made his first public appearance after the story broke about his dalliance during the 1984 campaign with a young woman not his wife on the yacht, "Monkey Business." The episode derailed his national ambitions, and former vice president Walter Mondale, propelled by the advertising campaign "Where's the beef?" went on to win the Democratic nomination only to lose 49 states to Ronald Reagan.

I met Sen. John McCain with a group of media executives in 2008, when he was the Republican candidate for president. (Ironically, Gary Hart will be one of the late senator's pallbearers.) Seeing him for the first time, it was difficult not to notice how physically broken he was. He was frail, his shoulders stiff, and he moved and extended his hand like the Navy pilot he was, who had survived being shot down (on his 23rd bombing mission), a leg and both shoulders shattered in the ejection, and tortured brutally -- many times near death -- over five years of captivity. Certainly, his strength as a prisoner of war is a true profile in courage. After almost a year, when the North Vietnamese discovered he was the son and grandson of admirals, they offered to release him, no strings attached, seeking to score a propaganda victory. He refused so as not to receive special treatment, thus honoring military code. He remained a prisoner another four years with the beatings intensified.

Meeting him, he was comfortable, glib, totally at ease. He offered a few jokes, including one that identified the group as "his base." I don't remember if he actually brought donuts with him or just referred to thinking about bringing them. But he was always popular with journalists, not least because he was open to criticizing his own party, and he was quick witted. Even then, before the conventions, he seemed consigned to losing, which he ultimately did in an electoral landslide to Barack Obama.

Sen. McCain, of course, had no hesitation criticizing Donald Trump before Trump was elected president. Or after. Even McCain's "final message," made public after his death, can be read as a broadside against the businessman-turned-politician. No love was lost between the two, and one of Trump's many low points is certainly how as a candidate he denigrated McCain's heroism as a POW.

To me, above all, McCain was steadfast in wanting America to aspire to the highest ideals, espousing visions of life with a greater purpose. But he also appealed to those who celebrate conventional wisdom, and he often seemed too eager to court media praise. He may also have wrongly burned Trump as much as anyone by his involvement in giving the discredited "Steele dossier" some of its original authority. The current president, of course, disdains conventional wisdom, preferring "winning" in a finite game. Two men: of vastly different character and, like all men, with their own flaws -- some much bigger than others. Rest in peace, John McCain.

I've tried to serve our country honorably. I've made mistakes, but I hope my love for America will be weighed favorably against them. ... Like most people, I have regrets. But I would not trade a day of my life in good or bad times for the best day of anybody else's.

I owe this satisfaction to the love of my family. ... And I owe it to America to be connected to America's causes: Liberty, equal justice, and respect for the dignity of all people brings happiness more sublime than life's fleeting pleasures. Our identities and sense of worth were not circumscribed, but are enlarged by serving good causes bigger than ourselves.

Fellow Americans, that association has meant more to me than any other. I lived and died a proud American. We are citizens of the world's greatest republic, a nation of ideals, not blood and soil. We are blessed and are a blessing to humanity when we uphold and advance those ideals at home and in the world. We have helped liberate more people from tyranny and poverty than ever before in history, and we have acquired great wealth and power in the progress.

We weaken our greatness when we confuse our patriotism with tribal rivalries that have sown resentment and hatred and violence in all the corners of the globe. We weaken it when we hide behind walls, rather than tear them down; when we doubt the power of our ideals, rather than trust them to be the great force for change they have always been.

We are 325 million opinionated, vociferous individuals. We argue and compete and sometimes even vilify each other in our raucous public debates. But we have always had so much more in common with each other than in disagreement. If only we remember that and give each other the benefit of the presumption that we all love our country, we will get through these challenging times. We will come through them stronger than before, we always do.

Ten years ago I had the privilege to concede defeat in the election for president. I want to end my farewell to you with heartfelt faith in Americans that I felt so powerfully that evening. I feel it powerfully still.

Do not despair of our present difficulties. We believe always in the promise and greatness of America because nothing is inevitable here. Americans never quit, we never surrender, we never hide from history. We make history. Farewell fellow Americans, God bless you, and God bless America.