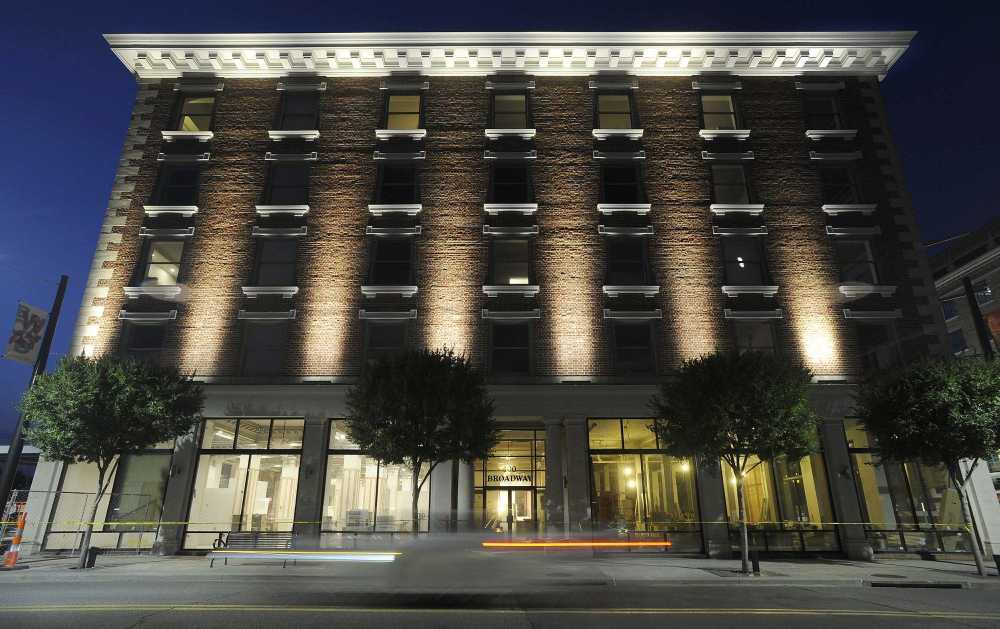 New lighting accents the front of the Courtyard by Marriott which is under construction Tuesday, Aug. 21, 2018 on Broadway in Cape Girardeau.
Fred Lynch

My dad loves Cape Girardeau and its progress, so when I was growing up and we went out of town as a family, the first thing we did upon arriving back was drive downtown, checking out the traffic, the lights, the people, any changes. Mind you: This was done even after the long drive from a rare family vacation to Florida -- hours of my parents and six kids squeezed into a station wagon. It's a tradition I've adopted. After being away, before heading home, we take a spin around Broadway, Main Street, Old Saint Vincent's and anywhere else we just want to see: a quiet hello to a place we cherish.

Cape is so much bigger than it was in the 1970s. Driving all of it, after a long trip, would take too much time. But earlier this week, thinking about this column, I stepped away from the office and just drove. Absence (even short ones) causes changes to pop out more prominently. Here is some of what I saw.

The Lorimier Street Apartments across from Indian Park are under heavy activity. The new windows look wonderful -- with a unique historical touch, and the tuck pointing is first class. It is shaping into a neat building. Around the corner, not new, but every time I walk or drive by, I'm impressed with what the city's parks and recreation department has done with the Gateley rose garden in front of the Red House. Nearby, the branding at Art Van / Hutson Furniture provides a bright, modern look.

Main Steet is a bit worn. Several buildings, previously filled with quaint shops, are empty. But others shine, including Hotshots, 36, Sugar Chic and Gabriel's. Riverview Court, the new condominiums by Kenny Pinksten perched upon the bluff north of Broadway are nearing completion. I parked the car to walk up the steep driveway to get a sense of the view. From the upper floors and top balconies, it must be spectacular.

On Sprigg Street, the massive and impressive Legends apartment complex is full of cars and the bustle of students. On Broadway, the corner where Burritoville is located has a new parking lot and Burritoville: a new, outdoor patio. Alas, no trees or greenery were added: a missed opportunity to truly make that space more attractive, more appealing.

Work has begun in earnest on the building next to El Sol, the long-time home of Courtesy Cleaners and the future home of Mary Jane's Cape location. The windows are open, allowing a view through the entire building. It promises to be another thriving space on Broadway.

At West End, the new Kidd's gas station gleams bright, and appears as its owner says, "Like packing 10 pounds into a five-pound sack." There, some greenery was added, providing a little respite from the concrete. The extra gas pumps were all occupied and the new drive-through much better to navigate: cha-ching.

On North Kingshighway, the burnt, seemingly fire-bombed sign at Papa John's continues to stand out. So I stopped (since it's been many weeks like that) to find out more. A worker explained that they're not sure exactly what happened, but a change from neon lights to LEDs "and a bad batch" is suspected. "New one is coming," it was said, though it wasn't clear how soon.

It didn't immediately register with me what the construction was next to Medicap Pharmacy (and across the street from Dunkin' Donuts). It's a new Imo's Pizza (something that was previously reported in the Southeast Missourian business section, as were nearly all of the construction tidbits in this column).

At the corner of Kingshighway and Mount Auburn the new MRV Banks Building is looking good -- and nearing completion. Up the hill on Kage Road, a temporary Cape Christian sign indicates the school's new home at Cape Bible Chapel.

Behind and across from Ford and Sons Funeral home there is a significant amount of groundwork underway. Bennett Family Dentistry, which bought a portion of the land, will eventually have a new office there -- and according to developer Scott Rhodes, a neighboring commercial development is still to be decided. Meanwhile, Mike Peters is prepping land for residences.

The new Burger King looks like a Burger King -- with an improved drive-through (and, I understand, enhanced interior). Wow, to tear down the original and rebuild new in less than two months is amazing.

On Siemers Drive signage is up for the new Kay's Jewelers, where in the same center will be a Great Clips and Sugerfire Smokehouse. Seeing the door open to Sugerfire, I stepped in to find the team interviewing staff. According to the owner/operator Doug Lang: salaried staff is already hired and in training. Restaurant will likely be open second week of September. "It could be open sooner," Lang said, "but we want to make sure the destination is fully ready." He pointed to a patio still under construction, which will feature a vintage truck and self-contained fire place.

Lang walked me through the building with pride, including how he and his partner worked around the city complications about using a shipping container as part of the decor. Instead of re-using an old container, they fabricated their own, which "works and looks better and was less expensive."

Food is served cafeteria-style with potential bottlenecks solved by signage, menus and experiential offerings (including the availability of beer at the front of the line). I've never been to a Sugarfire, but those who have rave about it.

Returning to downtown, Rust Center for Media was installing new, large windows on the front of the second floor, but the building that really caught my eye was the Courtyard by Marriott. A large porte-cochere (canopy) is under construction at the main entrance. The building looks spectacular, including at night, where new lights illuminate architectural details in dramatic fashion. Green space will play a prominent role.

We live in a special corner of the world. Not everything moves forward at the same time, and incorporating landscaping and greenery into development should be more of a priority, but the arc of history here is something to celebrate. It is a vibrant community with progress made possible by those taking risks -- and a community that supports them.