Good to be home after trip abroad 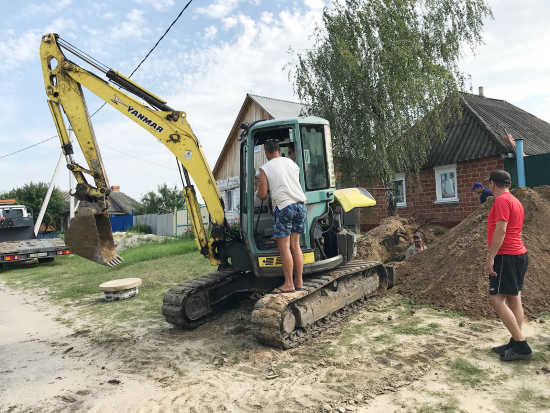 It's good to be back in the country. As my wife Victoria likes to say, "Being somewhere is fun. It's the travel, especially the older I get, which is hard. I need a rocket." One of the benefits of life back in the States for both of us is clean finger- and toenails. Seriously. For those who read my column last week about the magic of visiting inlaws in rural Russia, you'll know that running water wasn't part of our local situation. Instead, several years ago, I helped build a "summer shower", which is filled in the morning with cold well water (thankfully, there's a motorized pump, which helps when irrigating the fields). The shower is heated during the day by sunlight, and by afternoon it's wonderful.

To make the destination a bit easier in the future, a major project for our visit this year was having running water brought into the kitchen, which is a standalone structure from the house. No indoor toilet yet (we all agreed the outhouse works just fine -- and the cost would be too high). But washing vegetables, fruits and doing dishes will now be much more convenient.

It wasn't possible to have running water at "Dedushka's (Grandfather's) house" until recently. But the town added a nearby water line not long ago, and we decided to tap into it. Credit to my wife: From idea to reality, it took four days. (In fact, when I wrote last week's column, it wasn't even an idea.) The expense was roughly $760 (including sink and faucets), and thanks to a friend of a friend, a full crew came in with excavator two days later, attained the necessary city permits, and finished the project without a problem. The city -- note to local developers and government -- inspected and approved it the next day.

Talking with the company owner was fascinating. His biggest challenge (nothing new to us here): finding good employees. Too many candidates have drinking problems. Others don't show up when they're supposed to. Still others battle volatile tempers. So, when he doesn't have work to do, the owner keeps his employees on payroll. He even had one move into a cabin on his home property, because the man (without teeth and with little education) was dependable, hard-working and able to do odd-jobs when not on a construction project.

Washing tomatoes and apples in a real sink our last evening in Russia was quite nice. And, the teacups never shined so brightly. It won't help with the feet, but having running water in the kitchen is a good start.

Last week's column generated a lot of feedback. Some of the comments touched upon the distinction and rivalries between governments and the common conditions and joys we all face as men and women, mothers and fathers, and children, no matter where we live. It's always good to remember, when so much seems to be setting us apart, that our biggest dreams are the same. That lesson applies within America as well as between nations.

A public apology to former Jackson mayor Paul Sander. A front page story in Monday's newspaper included reference to past "controversies," which he previously derided as "politically motivated." What Monday's story did not originally include, but which was clarified in the semissourian.com online version Monday morning, is that the Missouri Attorney General's office had investigated long-ago accusations against Sander and cleared him. That information should have been in the original print story -- or, not included at all in context of the current news, which was Sander being selected by Jackson's mayor to fill an opening on the Jackson city council. The original print story also awkwardly listed the years Sander served as mayor.

I have much respect for Paul Sander, who helped nurture a strong regional relationship for economic development, and who was instrumental in several major projects in Jackson, including the East Main extension. His experience will be beneficial to have on the Jackson council and in service to the area.