Written from Russia: Perspectives on Trump and Putin 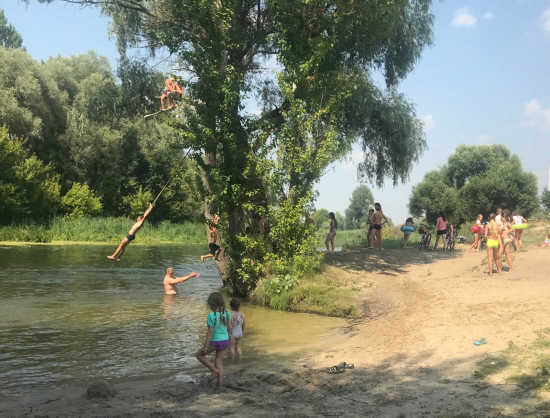 One of the joys of an international marriage is visiting relatives abroad, and I'm writing this column while on vacation in rural Russia. My wife grew up in a city of two and a half million people but spent her summers with grandparents in a small Russian village. Each year she and our four girls go to visit for at least six weeks. I usually join them for the last 10 days. It's a place where our girls often disappear in the morning and don't return (except for meals) until just before bedtime. When I arrive, Victoria and I often spend evenings at different farms with friends, eating fresh-picked vegetables, berries and fruit. The meals are cooked from scratch and burst with flavor. Of course, my working in the fields all day or doing other jobs outside the house help make any food, lovingly cooked, delicious. But this food, full of fresh, natural ingredients, is beyond words.

Elderly American friends who see pictures of our life in the village reminisce that it's like rural living in the United States in the 1940s or '50s with an outhouse and without air conditioning or running water. Maybe it is. But for a few weeks each year, it's the kind of vacation that money could never buy. So often, in America, we value life according to material luxuries. The more you have, the better. In fact, the greatest joys come from simpler things: love, friendship, family, a soft place to sleep at night, beautiful places to walk, peace with God. Russians are not so different from Americans in comparing themselves to others, however. Ever since I was a student in Moscow in the late 1980s, when "glasnost" opened Russian media to the rest of the world, Russians have had a chip on their shoulders, fearful that they've fallen behind and are disrespected. The collapse of the Soviet Union intensified this insecurity, and Russian President Vladimir Putin has ridden and engineered waves of nationalism -- and the image of a "Great Russia" resurrection -- to maintain his grip on power. Hosting the Winter Olympics a few years ago then the World Cup this summer were part of the plan. Taking Crimea "without a shot" was a banner achievement (though questioned more frequently, albeit quietly, in the Russia I visit as Russian economic woes continue, blamed partly on resulting U.S. sanctions).

Around the Russian village and elsewhere on my journeys, Putin and whoever is the American president at some point emerge in the conversation. I usually steer clear of politics, but it is always easy to understand the opinions of the speaker. President Obama, for example, was belittled as weak, maybe because the little Russian TV I watched made constant fun of him: from his exercise routines to what were deemed feckless threats. Village opinions about Donald Trump are more complicated, because originally there was an excitement about his election, but nowadays the American president is viewed more as indecisive and unable to institute the improvements in U.S.-Russian relations he campaigned on, and which Russian TV previously trumpeted.

Because I thought you might like to know, this trip I engaged more with Russians in idle chatter about politics. To one person, Trump is "a clown," who says one thing about Russia one day and another the next, while ratcheting up sanctions against Russia, increasing American oil sales to the world, and opposing beneficial Russian initiatives like an oil pipeline to Germany. This person was frustrated, because he thought Trump would heal the relationship between the countries. To another, Trump is simply a businessman, who cares only about America and its economy. The rest of the world doesn't matter to him. This woman seemed to respect the focus, though, and thought Trump was successful for America.

When I left the United States, the Helsinki Summit between Trump and Putin was only a few days over, and American commentators were castigating Trump (rightfully, I believe) in full voice for playing into Putin's game. To most of the Russian people I spoke with, though, the summit meant little. To them, nothing tangible was achieved, for example: no relaxation of American sanctions. And the issue of "Russian meddling" in U.S. elections seems trivial, not because they don't believe it was attempted, but because they believe meddling happens all the time.

But Trump really wasn't much on the minds of the Russians I met. Instead, like no other time I've visited, they were all -- to the person -- furious at Putin. The reason: a new policy that will increase the state retirement pension age from 55 to 63 for women and 60 to 65 for men.

To understand the rage, I should point out that in my previous visits pensions were also a point of conversation, but then, it was to reference how reliable and secure Russian pensions were compared to other countries, particularly Ukraine. Before, Russian pensions had been an explanation for Putin's popularity. This time, Putin was derided as promising one thing before he was re-elected this Spring to another six-year term and supporting the opposite after the vote. Some I spoke with made the case that most men and women just aren't fit to work after a certain age because of reduced physical and mental faculties. But most simply seemed to begrudge the extra years of work. No one made the case why the change might be needed: that life spans have significantly increased in Russia over the past decade and a half while overall population numbers are stagnant or declining because of families having fewer children.

Since hearing about the pension issue time after time, I've checked Western media to learn that protests have erupted across Russia because of the proposed policy. Protest leaders have even suggested that the timing of the policy announcement was coordinated with the World Cup to distract from popular attention. One told the Associated Press that if a referendum on the changes is not held, "millions will go to the streets. We will demand not only stopping the pension reform but also a change of power -- the dismissal of the government, the dissolution of the Duma (congress) and the impeachment of the president."

In recent days, Putin has soft pedaled the new policy, saying it will be reviewed. Still, his popularity has been seriously harmed among those I've spoken with: young and old. It will be interesting to watch what happens next. In the past, Putin has been quick to escape blame for bad results.

Meanwhile, where I'm writing, it's now middle of the day and the heat is soaring. My children are back at the house, and beckoning me to walk to a nearby river, where a "Tarzan" rope hangs from a tree and the local children love to climb and jump into the cool water from the rope and overhanging limbs. Tonight, there will be "shashlik" (medallions of pork roasted over a fire like shishkabobs) with garden tomatoes, fresh garlic and cucumbers, and Black Russian bread, plums and peaches pulled from nearby trees, fresh raspberries, home-made sour cream, maybe even some local wine or shots of vodka. There will be home-made pastries, and if we're lucky, a light wind, one of those simple joys that bring richness to life.

Jon K. Rust is publisher of the Southeast Missourian. He is currently on vacation in Russia.