Farewell to a First Lady 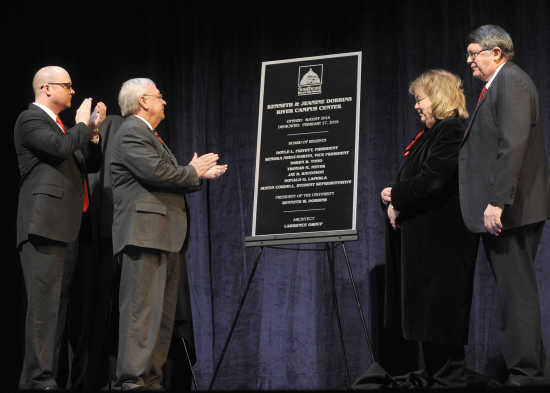 It's been a beautiful love story: Ken and Jeanine Dobbins. Together, they cared for each other in their careers, supported each other with their own and extended families, and raised a proud son who forged his own success in family and work. Most will think of Ken Dobbins as one of the longest serving presidents of Southeast Missouri State University: a man who dedicated 24 years to Cape Girardeau in leadership at Southeast. Jeanine was founder of the Missouri Statewide Early Literacy Intervention Program, and her desire to move here was catalyst for them coming to Cape in the first place.

Ken told me recently that he believed they were truly called to Southeast not for him to eventually become president but for her to found the literacy program, which under Jeanine's leadership educated more than 700 teachers and assisted more than 300,000 elementary students who had reading difficulties.

Not many will know Ken was born to a single mom, grew up in a mobile home and raised by his aunt and uncle, worked on a mink farm from the age of 9 through high school doing the dirtiest of jobs, struggled initially with school and college, only to find success thanks in part to the Air Force ROTC, good college career counseling and a talented young woman. The brightest part of his young life was meeting and eventually marrying Jeanine Larson, a stellar scholar and the first-ever undergraduate student trustee at the University of Akron, where they both studied.

They were married for 46 years, and through thick and thin, they were a team. Saturday night, July 14, Jeanine passed away after years of fighting one of the most devastating diseases known: Lewy Body dementia.

In hindsight, according to son Paul, it was a disease that first reared its head in 2012. It was then that the sporadic anxiety, disorientation and hallucinations began. The official diagnosis wouldn't come until later, after the episodes deepened and physical deterioration set in. For the last several years, she has been under the care of a remarkable doctor, Albert "Gus" Davis, a neurologist and instructor with the Washington University School of Medicine in St. Louis. Ken is quick to tell of how caring Gus was to Jeanine and him, being on call, even late at night and on weekends.

When Ken and Jeanine retired from Southeast in 2015, the plan was to make a home base near their son, daughter-in-law and grandsons in St. Louis -- and then travel. But health precluded the travel. Instead, more and more time was spent confronting and accommodating the ravages of the disease. It wasn't easy, and Ken spent most days at his wife's side. If I've ever heard a wistfulness in his voice, it was the question in hindsight whether he should have retired from Southeast earlier, to allow him to have traveled more with the woman he cherished. They just didn't know at the time what fate would have in store. The other regret: not being able to visit Cape Girardeau for performances at the River Campus, whose creation had been a labor of love for both of them, and a place that they were proud to watch students, ever so talented, soar.

Recently, Southeast Missouri State University announced that the Conservatory of Theatre and Dance at the River Campus would be named after Jeanine Larson Dobbins. The naming is the result of a significant gift by Ken and Jeanine, finalized recently. On April 22, a private event was held to commemorate the naming. Only a few were invited so as not to put too much stress on Jeanine's health. It was a perfect day, "the best day in two years," Ken told me. I was there, too, and although Jeanine was frail, her remarks were gracious. And she beamed throughout. Several students performed, and those in attendance serenaded Jeanine with a rendition of "Happy Birthday" worthy of the Sound of Music. The date was her birthday, too.

It was her last public appearance as part of a crowd. The few times Ken and Jeanine went out since, health allowing, it was usually to Steak and Shake: chili and onion rings were her favorites. The rest of the time she was more comfortable at home or at the hospital. Alongside her throughout, including at hospice during the last weeks: her husband.

It was clear over the years, seeing them together, their love and respect were deep and enduring. My heart and prayers go out to Ken and his family -- and to all those married until the last days of a spouse -- for being inspirations of wedded life: to have and to hold, for better, for worse, for richer, for poorer, in sickness and in health, until death do part. How wonderful such lives together are even if some days are difficult. The beautiful memories are what live on now, and the memories of Jeanine Larson Dobbins, the longtime First Lady at Southeast, will forever be special: above the Mississippi at the River Campus, across the rolling hills of the university, and beyond.