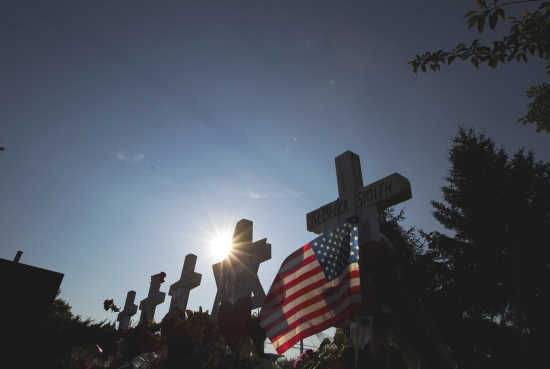 CORRECTS THAT ONE OF THE MARKERS IS A STAR OF DAVID - An American flag is placed next to four crosses and a Star of David representing the journalists killed, at a makeshift memorial outside the office building housing The Capital Gazette newspaper in Annapolis, Md., Sunday, July 1, 2018. Jarrod Ramos is charged with murder after police say he opened fire Thursday at the Gazette offices in Annapolis. (AP Photo/Jose Luis Magana)

It's easy to pick on the media. I receive phone calls weekly complaining about one thing or the other. Regularly, there are threats. Advertisers have said they would pull all their ads if the newspaper didn't do something they wanted; we didn't. They did. There have also been bomb threats, though none recently, and tire slashings. And, I'll never forget during an earlier part of my career when I wrote columns more regularly, receiving several anonymous letters over a period of time with stories about murders, including sniper killings, clipped from publications (usually USA Today) with the words scrawled, "You're next."

I informed the police.

In that case, it turned out to be a warped individual, a self-described "activist" who wanted attention. When he left town, I was relieved. But the threats had no influence on the newspaper's judgment about what was right to do.

The most impact a threat had was when I instructed an article to be removed from one of our newspaper websites temporarily as we contacted various law enforcement agencies, who helped track down the detailed threat to a formerly local individual then living in California. As soon as we understood the threat was (at least an immediate) bluff, the local publisher put the story back up. What was it about: The man's involvement with a bomb and a stalking on a local college campus a few years prior. Apparently, the article was harming his dating prospects. He had also gotten into trouble in California, we learned, and was restricted from leaving the state.

Threats and risk have always been part of the media business. Southeast Missourian lore includes tales of newspaper founder George Naeter keeping a pistol in his desk. When known belligerents came in to complain, and if that person's emotion turned high, Naeter would calmly open his drawer and pull out the gun, not holding it, but placing it on the desk in full sight. The action apparently sobered the complainer, who toned it down, or so it was told.

Would that work today? I don't know. Seems stupid and dangerous to me, possibly illegal, to display a gun as intimidation, especially against an overheated complainer. A firearm should only be shown if your life or the life of someone else is in grave and immediate danger.

Last week's shooting in Maryland at the Capital Gazette newspaper was the worst kind of nightmare: tragic, heartbreaking and maddening, like all of today's shootings. Looking at the faces, reading the biographies of those killed, I knew those people. Not personally, but in their commitment, their love of what they did, the attraction of working on a talented team, among "family," seeking to impact their community for good.

When asked only hours after the shooting if they were going to put out a newspaper the next day, reporter E. B. Furgurson III, told the New York Times, "Hell, yes."

His colleague, Joshua McKerrow, said, "'It's a real newspaper and like every newspaper, it is a family.' He began to cry. Then he added: 'We will be here tomorrow. We are not going anywhere.'"

It takes a special breed to work in local newspapers, especially in today's world. It is not a place one works to maximize income; it's a place one goes to be thrilled by camaraderie and collaboration and excellence, and to be involved in a larger purpose: seeking truth, celebrating local accomplishments, connecting communities.