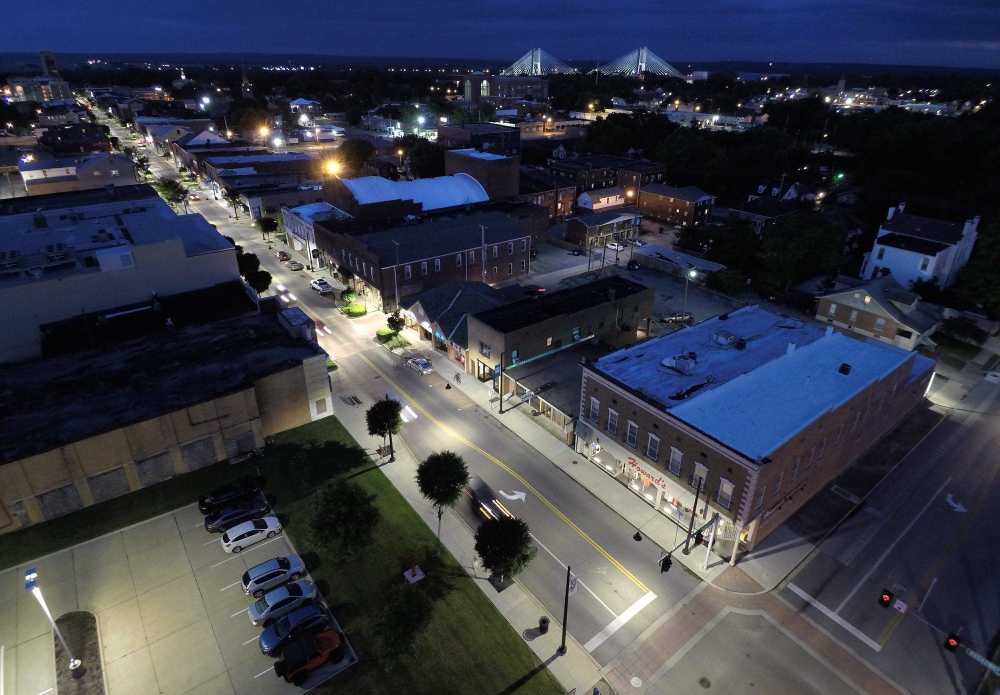 The Broadway streetscape is illuminated with new LED lights in this drone view Friday, June 22, 2018 in Cape Girardeau.
Fred Lynch

Driving down Broadway the other night (operative word: night) the trees along the road looked wonderful. Full and green. In fact, the whole streetscape popped: soft, clean, welcoming. That's when it dawned on me: the new lights are in and actually making a difference. Kudos to the City of Cape Girardeau for making the change!

Everyone will have their own opinion about how much of an improvement the new LED lights make. Because they're spaced farther apart, they're not as bright as the street lamps on Main Street. And, the fact the light containers hang over the street, crossing the sky with wires, remains a controversial original decision. But the new "bulbs" work significantly better, and in fact, I like that they're not too bright or garish. The sidewalks look pleasant to walk, even at night, and most of the previously dark areas are now splashed in enough illumination to feel safe. That certainly wasn't the case before.

Meanwhile, because they're not too bright, the buildings along the way that have lighting incorporated into their design still stand out, beautifully. My understanding is the consultants who originally recommended the hanging lights thought that business owners along the street would eventually decorate their buildings with lighting. And, thus, ambiance would generate from the buildings rather than the streetlamps. If true, it's a plan only slowly working to fruition. But some businesses have, indeed, used lighting to cause their businesses to sparkle. And those areas, in conjunction with the new lights, are something charming to behold.

For those who've followed this newspaper, they know the new lights cost around $94,000 and were the result of several city reviews of what could be done to brighten the street. With each fruitless review, however, hope diminished. The city appeared to be stuck for ... decades? Now, there's not only hope, there are results.

Not previously announced, but coming soon, another lighting improvement is on its way. Thanks to the Downtown Community Improvement District, which has already invested in new benches and trash cans throughout the downtown, as well as security presence on weekends and enhanced litter pickup throughout the week, lights will be installed to illuminate the trees on Broadway. Not Christmas lights. But directional lights, pointing up to bathe the trunks and leaves in radiance. (Disclosure: I serve on the CID board.) An idea I've had, with little success so far, is for sculptures, made out of and featuring colored light, to be added strategically throughout the area. Hopefully a business owner (AT&T? You have the darkest stretch along downtown Broadway) will take the lead. Here at the Southeast Missourian and Rust Center for Media, we already added an illuminated "Quill."

With such changes, downtown continues to progress. If you haven't been there lately, it's a good time to visit for dinner, maybe a microbrew, ice cream or a stroll, including at night, when the air isn't as warm, and the sidewalks are bright enough to see where you're going -- figuratively and literally.