The collateral damage of Mizzou's past failures 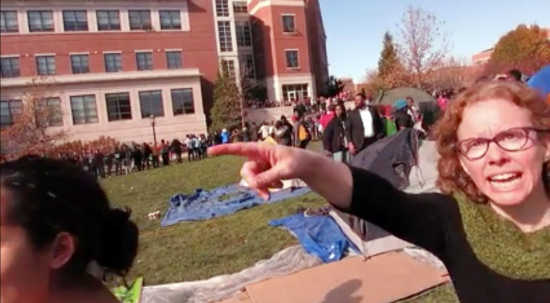 FILE - This Nov. 9, 2015 file frame grab provided by Mark Schierbecker shows Melissa Click, right, an assistant professor in the University of Missouri's communications, during a run-in with student journalists at a campus protest that followed the resignations of the university system's president and the Columbia campus' chancellor in Columbia, Mo. Click, who confronted a student photographer and another student videographer during the protests and called for 'muscle' to remove them, was charged with misdemeanor assault on Monday, Jan. 25, 2106. (Mark Schierbecker via AP, File) MANDATORY CREDIT

The editorial board of the Wall Street Journal slammed the University of Missouri last week for its "ambiguous" commitment to free speech, declining enrollment and expensive marketing campaign, writing: "Apparently, fewer parents want to send their kids to a school where activism eclipses academics." The editorial points out, "In May 2017, the university signed a $1.3 million contract for three years of outside PR help. This year it has spent $1.8 million on ads to recruit and enroll new students."

The results so far, according to the Journal: "As of the first week in June only 4,577 incoming freshman had paid tuition deposits. That's about 500 more than the same week last year, but about 500 fewer than in June 2015, before the protests. Mizzou now graduates more students than it takes in, so the total number of students is still shrinking."

The University of Missouri's problems have been bad for the whole state, diminishing the brand not only of the institution but of all of us. For good or bad, Missouri is us, because of its name. But its problems are harming us in other ways, too, which may not be so obvious.

The Wall Street Journal says, "Mizzou claims more aggressive recruitment from neighboring states' schools has contributed to the enrollment decline." Why? Because, according to a university spokesman, the perception of the school has weakened. So, what has the university done, besides trying to rehabilitate its image through PR? According to local sources, it is recruiting much more heavily within the state, targeting Missouri students that may not have been admitted before. And, they're doing it with scholarship offerings and other tactics not before seen. For example, again according to the Journal: "The school has added $8 million to its scholarship budget and will decrease the cost of student meals and housing next year."

To confirm what else the university is doing, I contacted system spokesman Christian Basi and received a list of self-described "aggressive" tactics, including: virtually free tuition for any Pell-eligible Missouri recipient. And, Basi told me: "free college" -- this includes tuition, fees, room, board and books -- for qualifying honors students. Additionally, according to a University of Missouri press release: "MU has focused on enrollment activities in the past year by adding more personal outreach, more events in high schools and at college fairs." All, presumably, costing more money.

University of Missouri system administrators may think this column helps them, because it highlights opportunities at Mizzou for more local students. But there's a cascading problem: MU's spending to attract more Missouri students leads to the need of other Missouri colleges to up their ante. Yesterday, the Southeast Missourian reported that Southeast Missouri State plans to retain the services of a marketing firm to refresh its brand. Cost: $150,000. Compared to Mizzou, that's peanuts. But to SEMO, it's real money at a time it faces other financial challenges. To justify the expenditure, Debbie Below, vice president for enrollment management and student success, said, "We are an educational provider. We are a business. We have a competitive landscape like any other would."

Meanwhile, Missouri State has announced changes in its recruitment practices, likely the result of Mizzou's tactics, including an additional $1.5 million in scholarships, a decrease in textbook costs, a housing cost freeze, and more. Are some of these changes good for students and their families? Absolutely, but they put increased pressure on regional universities that, thanks in part to public policy, don't get the same resources.

The fact is all three of these institutions -- and most colleges outside the very top tier -- are fighting enrollment headwinds. According to data from the Western Interstate Commission for Higher Education, which researches enrollment and demographics, the U.S. is in a period of high school graduation stagnation, with declines to come. The number of high school graduates in the Midwest is already in decline and expected to accelerate further. Meanwhile, the Trump impact on international students has not helped either, especially for colleges that aren't flagships. According to a Jan. 2 report in the New York Times, "Schools in the Midwest have been particularly hard hit -- many of them non-flagship universities that had come to rely heavily on tuition from foreign students, who generally pay more than in-state students."

According to one example in the Times, the University of Central Missouri saw a 1,500 decline in international students from Fall 2016 to Fall 2017, which led to lost revenue of $14 million.

Unfortunately, with regional universities in Missouri, their hands often are tied when it comes to responding to challenges and reinventing themselves for the future. Students, including non-traditional ones, who would prefer to stay in the local area -- due to family or jobs -- are a particularly important target for regional university growth. But problematically, in Missouri, public policy denies regional universities the ability to develop certain programs that would appeal to and service these students. Such programs are, instead, viewed as a threat to the flagship. As a result, regional universities are put under more duress -- without ability to create vital offerings -- and rural workforces (like in Southeast Missouri) lack the local ability to develop important, higher-level skills. Then, when the flagship blunders its educational mission, we all end up paying.

Maybe the University of Missouri should change its name to Mizzou, officially. Or better yet, policy makers could give the freedom to regional universities to develop programs without handcuffs to Columbia, while also addressing the inequitable funding of state colleges, which in Missouri is outdated and counterproductive. Doing so will help diversify and deepen the academic offerings throughout the state, and make all of Missouri -- the whole state -- stronger.