Beware the lava, the quicksand, President Trump and Speaker Pelosi! 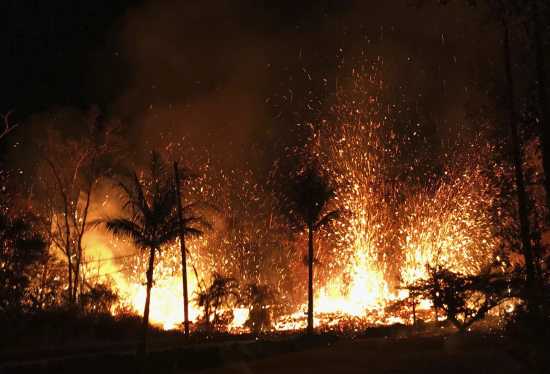 In this Saturday, May 5, 2018 photo, a new fissure erupts in Leilani Estates in Pahoa, Hawaii. Hawaii's erupting Kilauea volcano has destroyed homes and forced the evacuations of more than a thousand people. (U.S. Geological Survey via AP)

Anyone with young kids today has probably heard the phrase, "Stop. The ground is hot lava!" I have no idea where the game originated, but each of my girls has bellowed it out at some point, followed by careful walking on ground free of the pretend, hot magma. Sometimes, when traversing, say, a checkered green-and-white floor, the lava might only be the green squares, leaving a relatively safe way to cross a room.

During the past couple weeks my youngest, Liza, age 5, has peppered me with questions about the eruptions in Hawaii. And she regularly prays for the people who live there, especially those who've already lost their homes. It's caught her attention like few other news events (maybe, because we keep her away from most news).

Although I'd love to take the family to Hawaii some day, Liza has no desire to visit. Along with spiders -- she hates spiders and more than once has had a nightmare where her bed is covered by thousands of them -- she's decided that a place where lava could erupt, sending boulders the size of cars miles into the sky, isn't where she wants to be. Accordingly, the state of Hawaii is worried that a 5-year-old girl in Missouri isn't the only one who might be scared off by the current publicity, and tourist officials there are encouraging all who've already booked trips not to back out: "It's a big state," they say, "Only a small fraction of one island is affected." Meanwhile, flights over the island are being redirected as a precaution.

Lava isn't something we worry about in Southeast Missouri. Earthquakes, floods, tornadoes, oh my! But, thankfully, no volcanoes.

In my childhood, the big, pretend worry was quicksand. No one seems to worry about quicksand anymore, but in the 1960s and 70s, one of every 35 films made by Hollywood featured the stuff, according to a story in Slate magazine: "Terra Infirma: the rise and fall of quicksand." Even in the 1980s, it was in one of every 75 films, including two of my favorites, The Neverending Story (1984) and The Princess Bride (1987), and it was a regular on TV shows: six times in The Smurfs, three times in The Transformers and three times in G.I. Joe. The magazine reports that even an episode of Knight Rider featured the protagonist Michael rescuing his car "Kitt" from a quaking bog.

Apparently, quicksand became so cliche and overused, that it dropped as a device in movies in the 1990s and hasn't been heard from much since.

In contrast to volcanoes, quicksand is not a stranger to Missouri. Over on the Current River, there's at least one place it's been spotted. Contrary to how it's portrayed in old movies, though, quicksand is not the danger we were led to believe. For one, according to National Geographic and other web sites, it doesn't just swallow a person whole. Simply, the human body is too light, too full of air. More dangerous is if a person struggles so much she can't get out and then something else comes along like, on a beach, a rising tide. If you're truly worried about getting out of quicksand, there are several videos online that show you just how to escape without help. The key, according to National Geographic, which interviewed a physics professor at the Van der Waals-Zeeman Institute at the University of Amsterdam: "Don't ask your friends to tug on you; they're likely to pull you into two pieces. The way to do it is to wriggle your legs around. This creates a space between the legs and the quicksand through which water can flow down to dilate [loosen] the sand. You can get out using this technique, if you do it slowly and progressively."

Do you have any secret fears? Bats, wasps, President Trump or a return of Speaker Pelosi? How about the toilet snake (yes, it's real, all you need to do is google "surprise toilet python")? Of course, for parents, we all worry about our children in some way, and, because it's haunted me with specific events in years past, I dread the middle-of-the-night phone call.

For children, having some fear is healthy. It helps them learn what not to do -- for example, touch a hot stove. For the rest of us, separating healthy caution from unproductive anxiety or debilitating terror is a mark of wisdom and maturity -- and, trust in God. Philippians 4:6-7 says: "Do not be anxious about anything, but in every situation, by prayer and petition, with thanksgiving, present your requests to God."

Here's wishing you strength in any concerns you may be facing. In the meanwhile, if you get caught in quicksand, you'll know what to do.