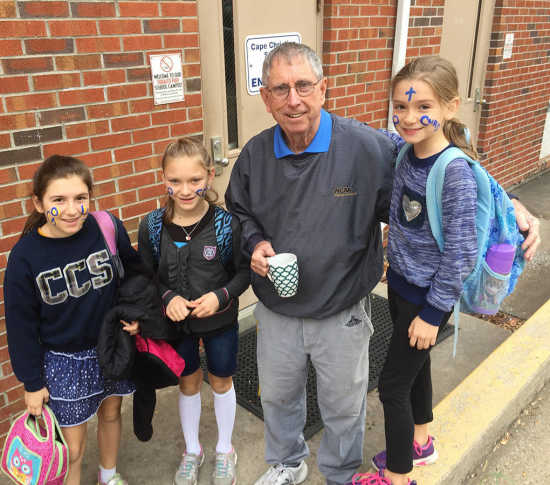 There is an inspirational story developing in Cape Girardeau, and it revolves around the resurrection of a beloved, academically elevated school whose future just weeks earlier was in doubt. For more than 42 years, Cape Christian School has transformed boys and girls with a mission to "educate students in a Christ-centered community where the Word of God is preeminent in all curricular and co-curricular instruction."

The mission statement goes on: "Spiritual and academic excellence is at the core of our educational process as we teach and train disciples of Jesus Christ."

Unfortunately, financial stress at the church that had been the school's prime benefactor led to a surprise announcement in April that the school would close at the end of the year. Shocked but undaunted, a group of parents and administrators who believed strongly that there was a place in town for an independent, non-denominational school like Cape Christian, pored over the budget, talked with teachers, reached out to potential donors and invited families to stay involved as a path forward was studied. Then, Cape Bible Chapel -- also a non-denominational Christian entity -- offered to host the school for a year or longer on generous terms, and faith in the future turned to reality. The school will continue, curiously, perhaps even stronger for the long-term as more people become aware of it and its good works.

I have a personal connection with Cape Christian, and it began roughly eight years ago when my wife and I called around to elementary schools to determine how they'd react to a first-grade student joining mid-way through a term after studying abroad the first two months of the year. The CCS administrator at the time responded with gusto, saying how exciting. Homework could be put together in advance so our daughter could take it with her and not fall behind. And, "How neat to share the experience with other students upon your daughter's return!" That flexibility, along with the reputation of the school and our friends who had children there already, is what led us to enroll our oldest. Currently, we have three students in the school with a fourth preparing to start.

It turned out to be an educational environment well beyond our imaginations. Always a small school (usually around 120 students in grades Pre-K through eighth), the environment was, indeed, Christ-centered and nurturing, as well as of the highest academic caliber. And over the years, the teachers and administrators have proven a love and commitment to the children that is awe-inspiring.

None of this is shared as disparagement to any other local school. In fact, I'm impressed by the dedication of nearly all teachers I've met, wherever they are. But Cape Christian can use a tool that simply isn't available to non-religious schools: the Bible and its teachings. And, that tool -- the preeminent tool -- makes a huge difference. CCS also teaches in a non-denominational context, which isn't centered on a particular dogma, but rather, which focuses on Biblical verse. This leads to attracting students from all church backgrounds.

I could tell many stories about Cape Christian and how it is unique: from its Speech and Word competitions, which require all students to perform in front of a crowd (something that builds confidence in young, even shy students, helping them to soar later); to weekly Bible verse memorization; and Knowledge-a-Thon fundraisers. The fact is higher expectations lead to higher performance: Success and good behavior become habits for these students. But what struck my wife and me independently at different events earlier this year is how much these kids love and root for each other. They truly do seek the "Golden Rule."

In my wife's case it was at a talent show where the students performed in front of the whole school. And, for me, it was at a sports awards banquet.

There was no sense of internal competition or jealousy among the "competitors." Instead, these kids were happy for each other, rooting on each other, showing love and cheering for each other, whether they were individually recognized or not. The affection was genuine and real -- and special. (And, so was the talent.) It is no wonder so many parents and faculty wanted the school to continue and made commitments so it could.

The next year promises to be full of challenge for the school. One of its biggest has been evaluating whether it can afford to keep any students on scholarship. Currently, its budget is set for children of all non-faculty to be at full tuition except for one group: children of area church pastors receive a 50 percent discount (eligible are basically all professional church teaching staff, for example: children of youth and music ministers, too, receive the 50 percent discount).

The school's principal, Carroll Williams, or school board president, Keith Baker, would be happy to welcome any donations to help with scholarships or any other purpose. For more information, call 573-335-8333. Or mail to: Cape Christian School, PO Box 1434, Cape Girardeau, MO 63702. Gifts are tax deductible.

The other challenge is establishing classes in a new space while determining the long-term future. Somehow, given how much the faculty, administrators and parents have accomplished in just the few weeks since it looked like the school might close, I have great confidence in what will be created next. Again, Cape Bible Chapel and its members deserve high praise for how they stepped in during the near-term. But with a larger community that recognizes the opportunity to continue and build an independent, non-denominational Christian school, unaffiliated with a single church, the future looks bright.