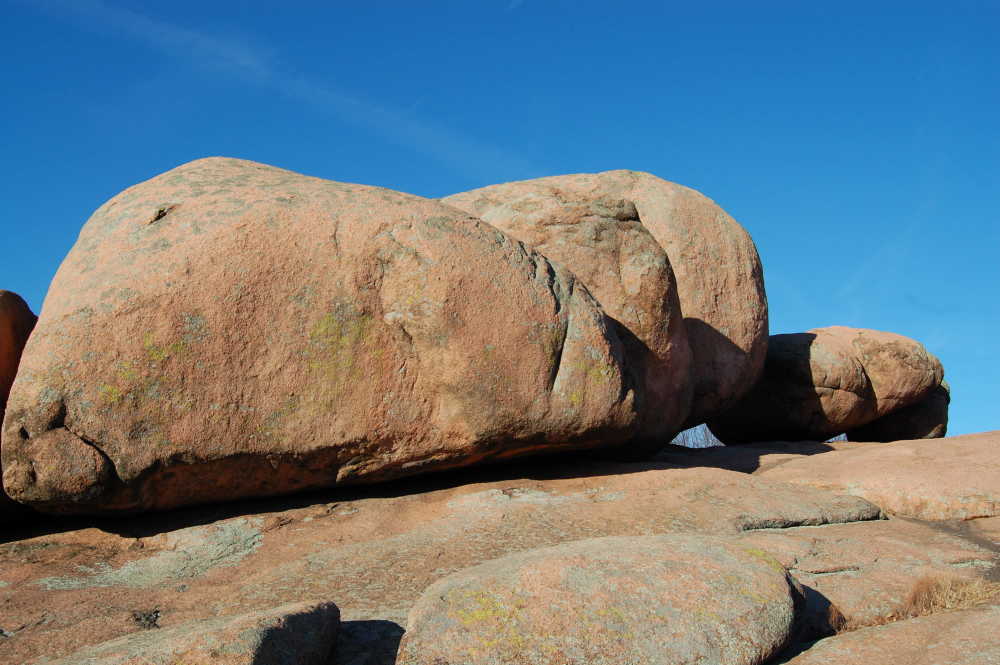 Yogi Berra once famously said, “Nobody goes there anymore. It’s too crowded.”

He was talking about a restaurant in St. Louis, but the sentiment could apply today to one of the more popular state parks in Missouri, Johnson’s Shut-ins State Park. In warm weather, the park is mobbed by swimmers, and only a limited number of cars are allowed in to the main parking lot. As a result, some would-be visitors don’t bother. 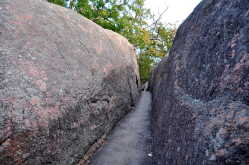 That’s not a problem in the winter, though. Even on a nice day – and we do occasionally have warm weather in the winter – it’s possible to have the shut-ins to yourself, or close enough. Winter also brings other fringe benefits to the outdoors, such as a lack of snakes and biting insects.

Johnson’s Shut-ins is located close to two other state parks, Elephant Rocks and Taum Sauk Mountain, that are also worth visiting in the winter. These state parks all feature easy, accessible, paved walking paths. However, more difficult trails are available for the adventurous. 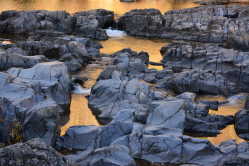 The term “shut-ins” is a uniquely Missouri term describing a place where a creek is squeezed, or shut-in, between two rocky hillsides. The flowing water is forced to push through bedrock, creating a maze of potholes and pinnacles. In the case of Johnson’s Shut-ins, the East Fork of Black River has carved a unique landscape in the rock (rhyolite porphyry, to be exact) that has long been popular with swimmers.

A short trail, less than a third of a mile long, leads to a boardwalk and observation deck that overlooks the shut-ins. An extension climbs a series of steps to a higher overlook, but that trail portion is completely optional.

In the winter, a good time to visit is an hour or two before sunset. The sun’s fading rays are reflected in the cascades of water, creating a stunning contrast to the rocky outcrops.

Note that pets, food, and disposable drink containers are prohibited on the shut-ins trail.

You probably won’t have Elephant Rocks to yourself even in the winter, as this playground of rocks is popular with all ages in all seasons. Still, the crowds shouldn’t be quite as crazy in colder weather.

The park’s designers pulled off quite a feat: building a trail through a rugged badlands of massive granite boulders, while making the walk wheelchair-accessible and friendly to the vision-impaired. This did require building “bypasses” of some of the tighter squeezes between the rocks. The final product, the Braille Trail, provides a one-mile loop around the park. It approaches “Dumbo” and the other elephant-like rocks, although reaching the actual elephants does require a side excursion up a short staircase.

An easy, but often overlooked, side trail leads to the “Engine House”. This granite-block building, now without a roof, is a remaining vestige of the railroad spur that provided access to the granite quarries here. In its day, this was a bustling scene, as the distintive red granite was shipped all across the country.

Pets are allowed on the Braille Trail. Who doesn’t want to pose their pooch in front of “Dumbo”? 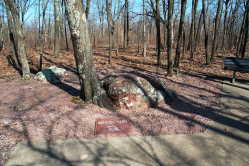 Among all of the states, the high point of Missouri is one of the easiest to reach. From the trailhead, it only requires walking 1,030 feet along a nearly flat concrete trail to reach the summit of Taum Sauk Mountain at 1,772 feet above sea level. Cross this one off your list, and there’s only 49 more states to go.

We have it easy in Missouri compared to some of our neighboring states. The high point of Illinois, for example, is on private property that is only open to the public for a handful of days each year. Climbing Kentucky’s high point, owned by a coal mining company, requires signing a liability waiver.

We also have it easy to compared to decades ago. In 1935, the Southeast Missourian reported on a group from Cape Girardeau that went to explore Taum Sauk Mountain. They had to park their car at “the cabin of a Greek goat herder by the name of Mechin” and then hike 8 miles to the summit.

Unfortunately, the high point at Taum Sauk is not particularly scenic. Like many Ozark mountains, the summit is more “knobby” than “peaky”, and doesn’t offer any kind of view through the trees. Without surveying equipment or a GPS device, it would be hard to pick out the high point from any other spot on the mountain. 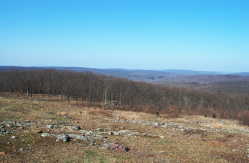 However, the access road does feature a glade that offers a clear view to the north. An observation deck includes signage that names the mountains, lakes, and landmarks visible in the distance.

The more adventurous may want to climb the Taum Sauk fire lookout tower, which provides the panoramic view that everybody expects to find at a state high point. For even more adventure, a grueling trail leads to Mina Sauk Falls, the highest waterfall in Missouri – but only in wet weather. Many hikers have made the arduous trek, only to be disappointed by the lack of flowing water.

From the Cape Girardeau area, take Highway 72 west through Millersville and Patton Junction and on to Arcadia. After crossing the overpass in Arcadia, turn right. You will then come to Highway 21. Look for the brown signs indicating directions to each of the state parks.

To reach Elephant Rocks, turn left and take Highway 21 north through Arcadia, Ironton, and Pilot Knob. At the stop sign and three-way intersection with Route N, turn left to continue on Highway 21. After another mile, look for the park entrance on the right.

To reach Johnson’s Shut-ins, turn south on Route N from Highway 21 (the turnoff is a short distance east of Elephant Rocks). Drive 13 miles on Route N and look for the park entrance on the left. Follow the access road straight to the main shut-ins parking lot.

To reach Taum Sauk Mountain, take Highway 21 south from Arcadia. After a few miles the highway comes to a roadside park. Just beyond the roadside park, turn right on Route CC (the turnoff sneaks up quickly). Follow this blacktop road to the state park entrance, where it briefly turns to gravel before ending at the high point trailhead.