Life in Cape Girardeau: My top stories in 2017 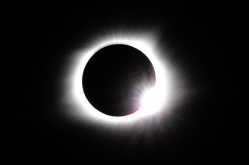 The sun moves just out of totality on Monday, Aug. 21, 2017, during the solar eclipse in Cape Girardeau.

With four girls between the ages of 5 and 13, my wife, Victoria, and I don't get to the cinema often. But as part of Thanksgiving festivities, we joined much of our extended family with girls in tow (or, more accurately, the other way around) to watch "Wonder," the heart-tugging, inspiring and uplifting film about a 10-year old boy born with facial differences who enters school with others for the first time. The values of empathy, courage and kindness play central roles. I recommend the movie. But the reason I bring it up now, looking back at 2017, is that one device used in the film (based on a popular children's novel by R. J. Palacio) is the dream of the young protagonist to be an astronaut -- floating in outer space free from earthly complications. The "Space" theme -- as refuge -- also resonated through several books I read toward the end of this year.

To me, on the national level, 2017 was a "turbulent" news year, which could alternatively be spelled, in five letters: "Trump." Escaping the daily national news scandals -- often created by the president, other times manufactured by his political opponents and the national media -- was a joy. Many of his accomplishments are worthwhile, but so much of how Trump treats others or how viciously he communicates is antithetical to the values I respect or seek to inculcate in my children or want to see as norms in our society.

Which brings me to one of my top local news stories of the year, a story about space: The Eclipse, a powerful, uniting, humbling event, which drew thousands to the area, where Cape Girardeau was blessed to have a prime view.

It was breathtaking to see the ring of fire appear around the moon, and listen to the cicadas as the sky darkened, and then the singing of the birds as the sun broke through again. Across town, tens of thousands turned out at the SportsPlex, Houck Stadium, the River Campus, the airport, in school playgrounds, behind businesses and in backyards to experience the marvel. The weather was ideal, and a common memory was created for the community that few will forget. At the places I visited that day, camaraderie, service and shared excitement bonded us all together.

Was this the most important or impactful story? No, but it was one of the most spectacular, and the Southeast Missourian captured it in stunning photo galleries and a video. It was also a story that revealed humanity at its best during an experience so much bigger than ... us, our planet, or even Donald Trump.

Business progress was a big theme for other 2017 stories: the opening of the SportsPlex and the new convention center. The Marquette Tower added more businesses and a coffee shop, and Codefi expanded. Aldi shut down and was rebuilt larger, and daily jet service launched between Cape Girardeau and Chicago. Both the Rhodes and Drury families received major awards -- and increased their local investments through business developments. The dentist Mike Bennett received a tribute from his son as the founder of 2017's Cape Chamber small business of the year, an award shared in a tie with the accounting firm Begley, Young and Unterreiner. Kidd's on Broadway was razed to be rebuilt in 2018. Pete Poe won the Southeast Missourian Spirit of America Award. Eighteen remarkable individuals were recognized as "Newsmakers." CarGO began delivery.

The River Campus celebrated its 10th anniversary, and Cape's movie multiplex was bought by a company that added luxury seats and a restaurant (serving alcohol). David Eckstein wowed the audience with an uplifting message at the Semoball Awards. Common Pleas Courthouse Park was renamed Ivers Square, which Old Town Cape used as a rallying cry to win a $127,650 private grant to help restore it.

There were too many people shot dead in Cape Girardeau, and police leadership hired a stats analyst, then revealed part of a new plan to address violent crime. Harry Rediger completed his last full year as mayor having achieved most of his top goals (but not a use tax), while dentist and current councilmember Bob Fox was the only citizen to put his hat in the ring to replace him. Fox filed for mayor while talking about the importance of stemming violent crime, a priority that will become a barometer of his tenure once elected. The group Authentic Voices asserted a Southside voice to city priorities.

David Robinson, the Sikeston native who has been in prison more than 17 years for a crime that another confessed to and whose conviction was fraught with questionable police tactics, received a new day in court in a case that has far-reaching legal implications if he wins. Meanwhile, a prominent doctor was found guilty in a civil case by the feds of a kickback scheme. Clay Waller was sentenced to 35 years in jail. And a university student gained 15-minutes of fame for protesting a "back-the-blue" sign in a Jackson business, suffering reprehensible Facebook commentary, then the loss of her job.

Scott City leadership imploded in charges and counter charges, resignations and lawsuits, and its citizens rose up against a prospective business development that would use creosote to treat railroad ties.

The Southeast Missourian banished anonymous commentary beneath its news articles and in its forums.

Cape Girardeau lost many cherished citizens in 2017, too many to mention in this space. But Anne Limbaugh, Gerald McDougall, Thomas L. Meyer, Joe Gambill, Mike Miller and Mary Bolen were a few who had broad impact. Gen. Seth McKee's image was added to the Missouri Wall of Fame.

Jim Welker retired as Cape school's superintendent and Neil Glass was named to replace him. Maryann Reese was elevated as CEO and president of Saint Francis after long-time leader Steve Bjelich retired. Collaboration hit new high marks between institutions with Reese and SoutheastHEALTH CEO and president Ken Bateman announcing their openness to working together where it made sense; Rediger and Jackson Mayor Dwain Hahs coordinated a regional retail recruitment effort with the help of Magnet, the Cape Chamber and the IDA. And Glass and the city began discussions about potential education initiatives as envisioned within the Purpose-built philosophy.

The river crested at an all-time record high. But it did it rapidly, and only a year after the last 500-year flood. Thanks to buyouts from previous floods and the foresight (and ongoing maintenance) of city government, few in the city of Cape Girardeau were affected. I actually forgot about this story ... until reviewing the www.semissourian.com website traffic stats from the past year.

The university marked several accomplishments, including the launch of degrees in engineering systems and unmanned aircraft systems (drones). And president Carlos Vargas-Aburto and team navigated the institution through massive state budget cuts with good morale and a common purpose. Meanwhile, college algebra was removed as part of the required curriculum and the university's campuses went tobacco-free.

Levi's Adventure Trail opened in County Park South and Capaha Field was transitioned to turf. A 5-year-old girl's life was saved by student lifeguards at Cape Splash. The Cape Girardeau Police Department substantially completed the construction of a new headquarters to open in 2018, while the fire department opened a new station. Perryville survived a major tornado with minimal loss of life and an inspiring amount of neighborly assistance.

In a stunner, Hutson's Fine Furniture announced it would be closing its doors after 72 years -- with language that suggested a new concept is coming to the same space, maybe or maybe not managed by the Hutsons.

Finally, although there were many other items I could underline, Wendy Kurka Rust was recognized with the Zonta Lifetime Woman of Achievement Award. In receiving it, she spoke about her daughter Robin, who at the age of 14 months died in an automobile accident along with my grandfather and aunt (before I was born).

"When she died, she left me a gift that made my life more meaningful," Rust said. "Her tragedy brought compassion, empathy and love in my heart for all those who have crosses to bear, and I found out then, that's everyone.

"I learned that it's how we handle those challenges that gives meaning and purpose to life," Rust said.

All of these stories and thousands of others were in the Southeast Missourian in 2017. More were online with thousands more photos. There were stories that celebrated the heroes in our midst: the volunteers, the teachers, the philanthropists, the churches, the hardworking men and women who make America great. There were the newly married, the long-time married, and the newly born. There was coverage of the events around our community that make living here special. And, alongside, often: the stories about some of the ills of our society, where light can help heal or, in the future, prevent.

National news in the Missourian is more complicated, because we rely on the Associated Press, and while I respect and admire the AP's professionalism and its dedicated staff, their perspective on stories is often attuned to a different audience.

Where else, though, can you find so much comprehensive, local content? So many stories and photos of local uplift, empathy, courage and kindness? Of love? Maybe the escape from the turmoil isn't Outer Space. It's right here, every day, celebrated in the pages of the Southeast Missourian: our neighbors and our local institutions; our places of prayer and our gatherings for fun; our families, ourselves.

Thank you for reading. Today. And in 2018. Without you and your support, your subscriptions, your advertising, your encouragement, we wouldn't be able to tell these stories. May you be blessed by peace, love, hope, friends and family, long into the future. Happy New Year!

Jon K. Rust is publisher of the Southeast Missourian. His email is jrust@semissouran.com.