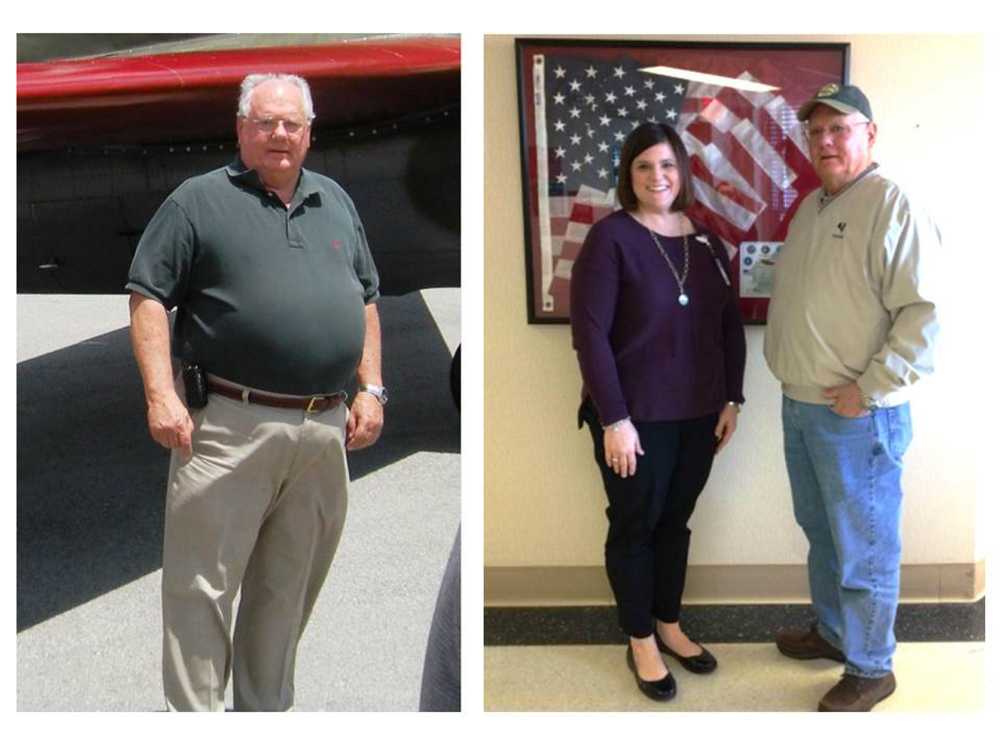 Veteran Alan McSpadden was prediabetic before losing 65 pounds through diet and exercise. Here he is shown before, at left, and after, with VA registered dietitian Brianne Riggins.(submitted photo)

POPLAR BLUFF, Mo. -- A Poplar Bluff veteran is tackling the holiday season -- and its large family meals -- with a new attitude toward health and diet.

Alan "Wayne" McSpadden is 65 pounds lighter after doctors warned the 70-year-old he was on the road to type 2 diabetes.

Through a program offered by John J. Pershing VA Medical Center, McSpadden has learned to make exercise, diet and weight loss part of a better future.

VA staff say McSpadden is a real success story, and they hope his story will help encourage others to take action.

McSpadden celebrated November, which is National Diabetes Awareness Month, on the right track thanks to MOVE!, a multidisciplinary weight management program that focuses on making behavior changes related to food and physical activity. 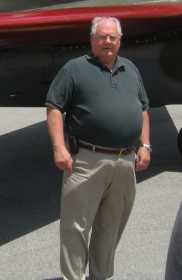 "My father was a tail gunner on a B-17 during World War II and flew 35 missions over Germany," McSpadden said in a news release. "One day, we heard a B-17 was coming to Branson, so we took my dad to see it and take a ride on it. But, to get to where my dad sat, you had to go through the bomb bay, and it was a narrow, V-shaped pass-through.

"I wasn't able to fit through there. I hadn't realized I'd gained that much weight, but I knew it was time to do something."

McSpadden learned during a visit to his primary care provider at the VA that he was prediabetic. Diabetes is the leading cause of adult blindness, kidney failure, cardiovascular disease, amputations, nerve damage and other complications. In some cases, type 2 diabetes can be controlled by exercise, diet and weight loss.

"That got my attention," said McSpadden, who served in the Air Force, including a tour in Southeast Asia early in his career. "Several of my family members have diabetes and have suffered a number of complications from it. So, when my provider recommended I participate in the MOVE! program, I was ready."

The program includes guidance from a registered dietitian, a psychologist and a physical therapy assistant, according to Brianne Riggins, a VA registered dietitian. It consists of nine weekly sessions, plus follow-ups at one, two, three, six and 12 months. 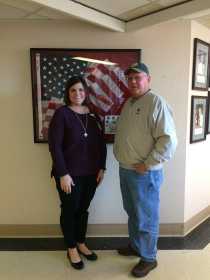 "Participants are encouraged to make behavior changes that are sustainable and can be managed long-term," added Dr. Amanda Wallace, VA psychologist and health behavior coordinator.

"It was pretty intense in the beginning. We met once a week for a couple of months," said McSpadden, who became a civil engineer after his discharge. "The group experience kept it interesting and motivational, and learning how to do the journaling and keeping the portion size in the front of my mind was very effective."

The tag-team approach helped, according to McSpadden, and he saw a quick loss of 20 to 30 pounds.

"And the rest is calorie-counting, journaling, portion control ... the usual stuff," he said. "I gave up sodas and candy bars, cut the fried food and switched to grilled chicken. But I never really had to quit eating things I enjoyed -- I just needed to watch how much of them I ate." 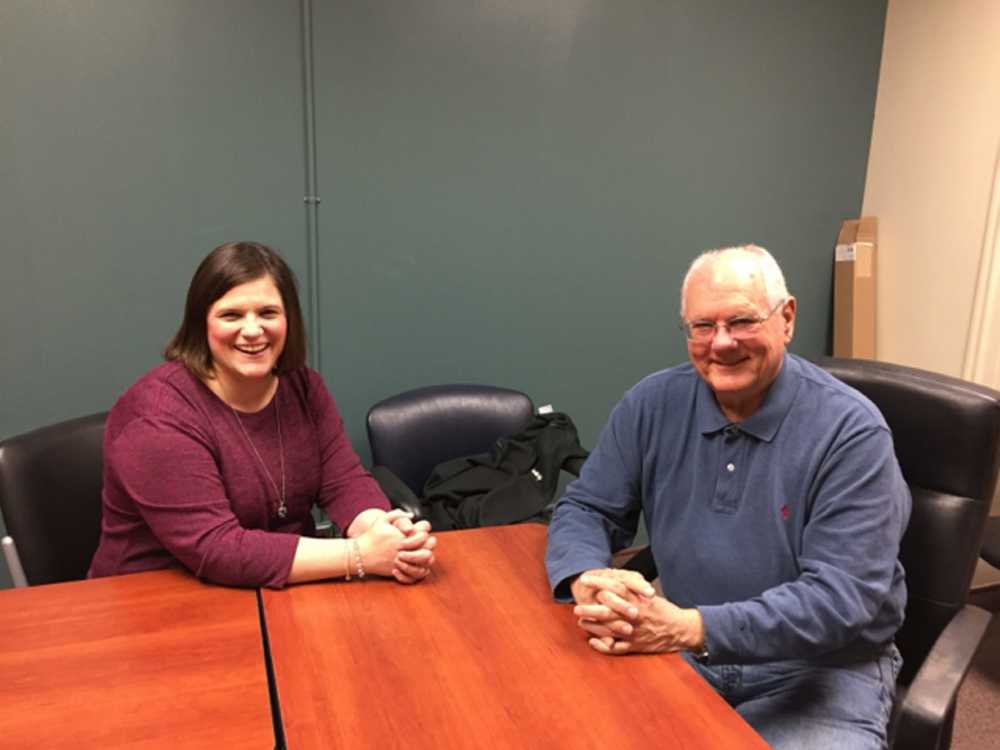 He can do more, with more energy now, including getting around the golf course, McSpadden said.

"It's made a big difference," he said. "When I first started losing the weight and would run into friends and family I hadn't seen in a while, they were amazed at the change in me, and told me to keep it up."

He smiles as he describes his yoga instructor daughter as a "fitness nut," adding, "I think she's proud of what I've done."

"Not a day goes by that I don't feel proud about my dad and all he has accomplished," said his daughter, Kara. "I'm so happy he is taking his health seriously -- not only for himself, but for his grandkids, who think he hung the moon."

The benefits have extended to his wife, who has also lost weight, McSpadden said. 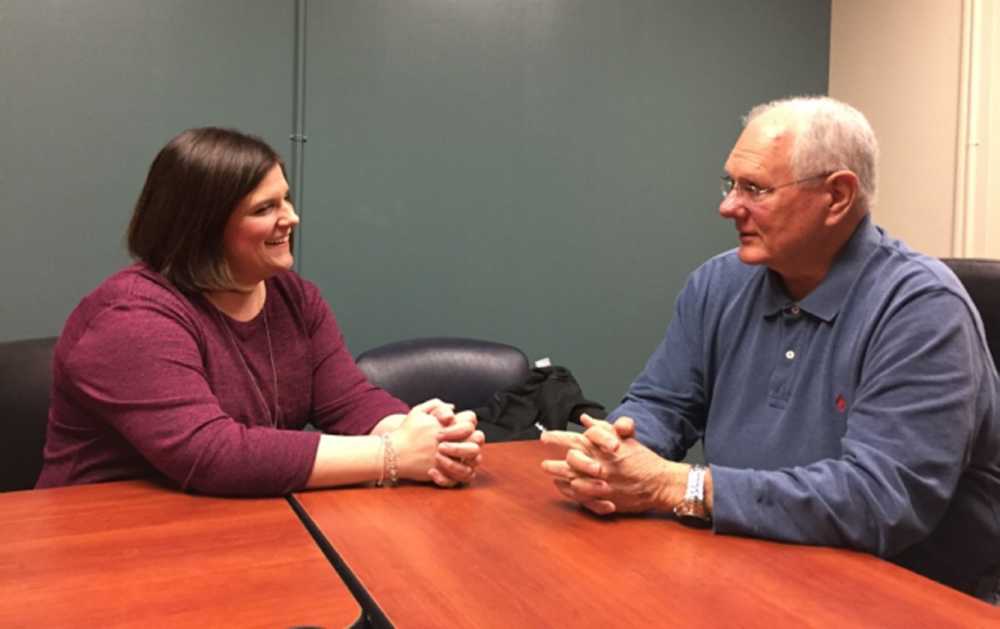 "When your spouse's eating habits change, your eating habits tend to change as well," he explained. "Our experience with other diets was short-lived, but I'd highly recommend MOVE!."

For more information about the program, visit www.move.va.gov.