A way back home: Microchips can help people reunite with lost pets 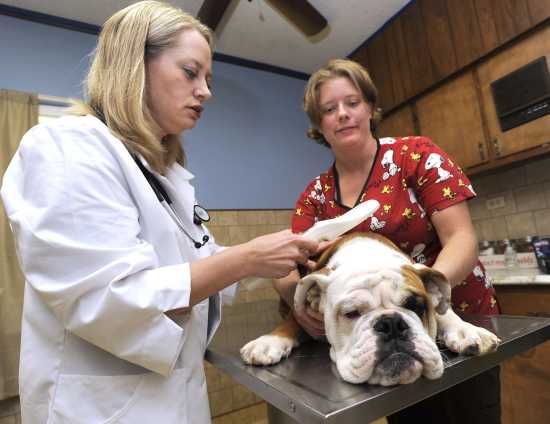 The gate is left open and Fido follows his nose, traveling upwind toward a seductive scent. Felix makes a dash for the door and, like a laser, is down the block in no time at all.

You search. You knock on doors. You post fliers. But the absent animal seems to have vanished.

Then the phone rings, and it's good news: The nice person who found the tagless Fido took him to the Humane Society, where he was scanned, and, because of the microchip beneath his skin, he could be matched up with you, his human. Or, the kind kid who found Felix delivered him to a local veterinarian, who used a scanner to read the embedded chip, check a database and help the feline return home.

Tracy Poston, director of the Humane Society of Southeast Missouri, says the shelter uses its scanner on a fairly regular basis to help return stray or lost animals to their owners.

While there are several brands of chips and scanners, among them Avid and HomeAgain, the Humane Society and most veterinary clinics have a universal scanner that will detect any microchip. The chip itself -- no larger than a grain of rice -- doesn't contain precise information, but it carries a unique number that can be referenced in any of several online databases -- petkey.org, registermicrochip.com and 24petwatch.com are just three -- which match the number to the owner's online information such as address, phone number and email address.

"It happens every single day. The kids open the door, and out goes the pet. Or someone working in the home leaves the gate unlatched," Poston says. "It's part of the service we provide to the community -- to reunite lost pets with their owners."

Poston says the shelter is equipped to outfit animals with the chip.

"It's our policy to chip any animal that we adopt out, and we adopt out hundreds of animals per year," she says, adding the Humane Society doesn't offer a microchipping service to the general public, and it highly recommends pet owners address the procedure with their veterinarian.

"We suggest to clients that they go for the microchip when they bring a pet in for spaying or neutering," Benfield says, adding that Skyview uses the HomeAgain brand chip, implanted between the animal's shoulder blades, because it "doesn't migrate" -- other chips may move from the implant site to other parts of the animal's body.

On a monthly basis, Skyview may have about six found pets brought in; Benfield says one or two may have a chip that makes it easy to return the animal to its owner.

Dr. Kelly Smith, a veterinarian at Dogwood Veterinary Hospital in Cape Girardeau, says her practice microchips "approximately 50 patients per month," adding, "our technicians discuss the procedure and benefits when our young patients are going through their vaccination series or are presented for a surgical procedure."

While Dogwood scans a few pets a month when a client brings in a found animal, Smith says, "most people finding an animal without identification will take it to the Humane Society, where the scan will be done. Many pets have found their way back to worried owners ..."

Of microchipping, Poston says, "It's the way to go, because pets can't speak, and often their tags or collars are lost. The microchip is going to get them home."