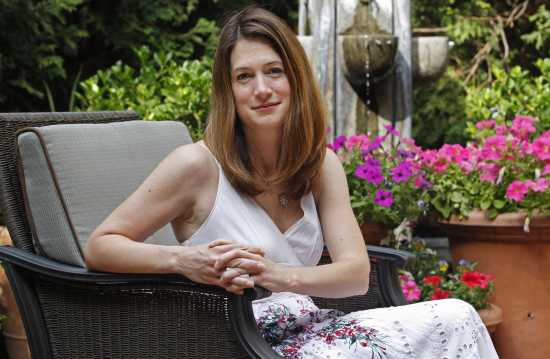 Gillian Flynn, author of “Gone Girl,” grew up in Kansas City, Mo., and had Cape Girardeau in mind as the setting for her book, which is being made into a major film and is being shot in Cape Girardeau. (M. Spencer Green ~ Associated Press file)

Gillian Flynn is interested in doing a little relaxing.

After writing the best-selling novel "Gone Girl" and writing the screenplay for the novel's film adaptation, Flynn, 42, is taking advantage of a well-deserved break in her schedule by spending time with her husband, lawyer Brett Nolan, and their 3-year-old son Flynn in their home in Chicago.

On Thursday, Flynn was able to make time for a telephone interview by the Southeast Missourian, in which she discussed topics that included growing up in Missouri, her time as a writer for Entertainment Weekly and her past visits to Cape Girardeau.

Q: You grew up in Kansas City, Mo. Does that mean the actual city or one of the suburbs?

A: It was Kansas City proper. Both of my parents taught at a community college right by our house. My dad taught theater and film, and my mom taught reading to kids trying to get up to college speed.

Q: With those kinds of parental influences, were you exposed to your fair share of books and movies?

A: It was a good way to grow up. I grew up in a house that really valued telling stories and making sense of our lives through stories. We talked about things like, "What are you reading?" and "What are you watching?" To this day, I phone home and my dad asks if I've seen any good movies. I grew up in a place where it wasn't crazy to want to write a book. It was considered a valuable thing to do.

Q: When it came to reading, were you interested in the standard Judy Blume books for schoolgirls?

A: I was more interested in dark and scary books. I remember reading Stephen King's "Night Shift" over and over again. It had such kooky stuff in it.

Q: Is it true that one of your jobs during high school entailed you dressing up in a yogurt-cone costume?

A: I had the most ridiculous jobs in high school and college. The worst was being in that yogurt cone and walking around the mall handing out yogurt samples. A 16-year-old does not find that very funny at all. It had this giant head with a fan inside to keep me cool.

A: It was a controversial decision, but it was actually minor rebellion on my part. My dad and all of his brothers and sisters had gone to Mizzou. My cousins, too. I was like, "I'm not going to do it!" I had friends that were going to KU and I decided to break with tradition. I still get flooded with emails saying, "Ha, ha, ha," whenever Mizzou beats KU in a game.

Q: You graduated from KU with degrees in journalism and English, and after that you spent two years in California writing for a trade magazine. Did you enjoy the work?

A: It was a trade magazine for human resource professionals, so it was very sexy. It's what every 22-year-old thinks of when they think of the glamorous world of journalism. But I learned a lot about things like employment law and work-life benefits.

Q: Following that you went to Northwestern University in Chicago to get your master's degree in journalism. But you've been quoted as saying that you were too wimpy to be a crime reporter. Is that what you had planned to become?

A: I had originally planned to cover the crime beat for a newspaper. I knew I wanted to write for a living and I was interested in why bad things happened and why certain people could come together and create violence and chaos. I went out on my first assignment and realized very quickly that I was not cut out for that at all.

Q: Was that for the Chicago Tribune or another notable newspaper?

A: No, I was still a student. It was part of Northwestern's program of being a stringer for area newspapers.

Q: But you landed on your feet by going on to write for Entertainment Weekly for the next 10 years. During your last four years there, you were the television critic. Was there a show that became a favorite of yours?

A: Oh, "The Wire" on HBO. It's still my favorite. It's a really intricately involved and almost perfectly done show. I'm slowly working my way back through all five seasons.

Q: Was it during this time that you felt you had a novel or two inside of you?

A: I really liked my day job. I was living in New York, was in my 20s and was getting paid to watch and talk about movies. But it was a weekly magazine; you'd write something and then it was gone. I liked the idea of creating my own world that I could live in for a while. Being such a book fiend, I wanted to see if I could do it. I wrote my first book on nights, weekends and holidays for a couple of years, typing away when I could. I don't even remember starting it because it seemed so intimidating to say, "I'm writing a novel." I didn't tell many people about it.

Q: That first book was "Sharp Objects," which contains references to locations in the Bootheel. Did you visit those areas before you put them on paper?

A: I know Missouri pretty well. My parents were big into antiques and flea markets, so during the summer they would load me into the car and drive me around Missouri to different flea market and antique events. But I don't remember specific places in the Bootheel; I just remember the geography and the feel I had for it.

Q: Was your manuscript for "Sharp Objects" met with many rejections?

A: Some publishers were interested, but I heard back from others who rejected it because they were worried that the characters weren't likable. They didn't think that women would like to hear about women who did bad things, which I thought was absolutely ridiculous. But were able to find a good spot for it. [All three of Flynn's novels, "Sharp Objects," "Dark Places" and "Gone Girl," have been published by Crown.]

Q: You followed "Sharp Objects" with "Dark Places." Have the movie rights been sold for that?

A: Filming has already started, actually. Charlize Theron will be playing the lead.

Q: When it came to writing "Gone Girl," was there any specific inspiration?

A: I just wanted to write about the darkest side of marriage that I could. I think I was a recent newlywed when I started writing it. I wanted to look at the ways marriage influences people what it does when it goes wrong. I liked the idea of a he said, she said tug-of-war between Nick and Amy. Each of them has their own spin, which is somewhat diabolical at times.

Q: David Fincher [director of "Gone Girl"] said you told him that Cape Girardeau was the place you had in mind for the "Gone Girl" location of North Carthage. Is that true?

A: I remember when he sent me photos of Cape Girardeau, and there was that great length of street heading down to the river. It looked absolutely what I had pictured in my mind. It was perfect when I saw it. I hadn't been to Cape Girardeau in a number of years, but it was the exact type of location I had in mind. I wanted the river to be a big character, and the corner bar just looked perfect. I felt everything about it was straight out of my brain.

A: I was there in early October to see some filming. Before that, it's been awhile. This is bizarre, but during college my friends and I would always go to Graceland for Elvis' birthday. On the way we would stop in Cape to have a bite to eat. It was always our stopping point on the way to, or from, Memphis.

Q: In "Gone Girl," Nick and Amy lose their jobs during the publishing-industry meltdown. You also wrote about the "Blue Book people" in North Carthage who had lost their jobs making the Blue Book, the official state manual of Missouri that is now published online. Was this your comment on the slow death of the print industry?

A: Absolutely. I started writing the book at the height of the recession, and I had been laid off from Entertainment Weekly. The job situation for journalists has recovered a bit, but at the time everyone was just getting fired. It made me feel that we were heading into a new era. How do you reinvent yourself? As Nick says in the book, journalists are sort of like buggy-whip makers and women's glove makers -- their time has come to an end. That was exactly how I was feeling. I have literally no other skills besides writing. It's the only thing I can do. I wasn't going back in that yogurt costume again.

Q: Is there a chance we could hear from Nick and other "Gone Girl" characters again in another novel?

A: I've had people come up and almost threaten me for a sequel. It's not going to be my next book, but never say never. It could be fun to revisit them in about 10 years and find out what they're up to. No good, probably.

Q: Are you already at work on another novel?

A: I'm in the thinking stage as opposed to the writing stage. I've been in a "Gone Girl" world for quite awhile now, so I'm giving myself some breathing room. I've been reading a lot and watching TV and movies, trying to re-energize.

Q: Was the crossover from writing the "Gone Girl" novel to the screenplay a challenge?

Q: Is it safe to say that you're pleased with the job that David Fincher and the cast are doing to bring "Gone Girl" to the big screen?

A: It was thrilling to go down to Cape and see some of these scenes get filmed that have been in my brain for so long. It was exciting to hear those words come out of these great actors' mouths. It was definitely surreal. The actors and everyone involved are top-notch.

Q: Any idea of the number of "Gone Girl" copies that have been sold so far?

Q: Who are your favorite authors?

A: I love Margaret Atwood. Arthur Phillips is absolutely fantastic. Joyce Carol Oates has been a favorite since I was a teenager.

Q: Being a self-professed movie geek, do you have a favorite movie or two?

A: The movie that I would watch over and over again is "Jaws." If you're going for pure enjoyment factor, it's the one I've never gotten tired of watching since. I can quote it backwards and forwards.

Q: Do you know Robert Shaw's famous "Jaws" monologue that he gave to Roy Scheider and Richard Dreyfuss?

A: Exactly! "Black eyes ... dead eyes ... like a doll's eyes." I spent the summer teaching my son that monologue.

Q: Are there any Cape Girardeau book signings on the horizon?