Director of 'Gone Girl' talks about life behind camera 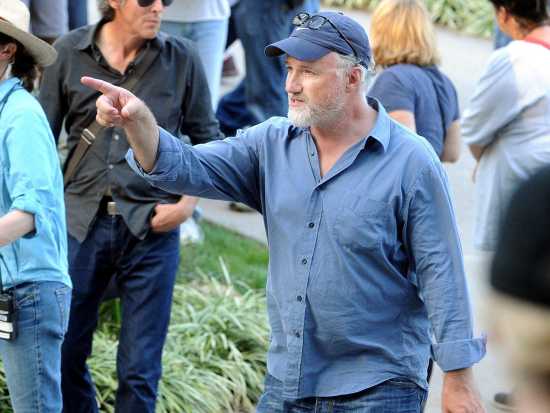 “Gone Girl” director David Fincher is seen on set of the feature film, which is being filmed in Cape Girardeau. (Laura Simon)

A two-time Academy Award nominee for Best Director for "The Curious Case of Benjamin Button" and "The Social Network," Fincher, 51, is in the throes of a daily filming schedule that requires his expertise for sequences that could last well into the early morning hours.

When Fincher is not directing "Gone Girl" cast members such as Ben Affleck, Rosamund Pike, Tyler Perry or Neil Patrick Harris on location in Cape Girardeau, his time is consumed with meticulously reviewing the previous day's filming, a process that might mean reshooting of scenes he finds not up to his standards.

In short, Fincher's schedule is murder. But as an acclaimed director of feature films dating to 1992's "Alien 3" and a veteran of directing music videos and commercials during the 1980s, he knows the life he has chosen involves tremendous effort. In Fincher's words, directing is a "full-contact sport that takes a lot out of you."

On Friday, Fincher was able to make time for an interview by the Southeast Missourian, in which he discussed topics that included his directorial influences, being a perfectionist and his "Gone Girl" leading man, Ben Affleck.

"Gone Girl" director David Fincher on set of the feature film, which is being filmed in Cape Girardeau. (Laura Simon)

Q: Where are you from?

A: I was born in Denver and grew up in four or five places in Marin County in the San Francisco Bay area.

Q: The answer may be obvious, but did you see a lot of movies growing up?

A: Every week. Saturday and Sundays I'd be at the movies.

Q: During that time, were you already attracted to certain directors?

A: George Roy Hill was my favorite director growing up. Movies he directed, like "Slap Shot," "Butch Cassidy and the Sundance Kid" and "The Sting," were amazing. I liked his succinct visual style. His scenes were put together in simple and direct ways. His movies were quite literate.

Q: Did following a director's style at the movies lead you to filming at home with a Super 8 camera?

A: Oh yeah. It was a real nerdfest. Those old reels are around somewhere. My mom keeps threatening to transfer them to VHS.

Q: When "Apocalypse Now," for example, was released, did you see it for Francis Ford Coppola's direction or for Robert Duvall saying, "I love the smell of napalm in the morning"?

A: Both. I was a big Coppola fan. Growing up in Marin County, I vividly remember going to school and seeing Al Pacino and Diane Keaton shooting the scene in "The Godfather" where he brings her back into the fold. It was an amazing time. George Lucas was my neighbor.

A: Yeah, in '72. The interesting thing about that wasn't seeing any stars but seeing the carnival. The production took over the streets and all of those old cars were driving all over. It's such a fantastic movie. My friends and I proclaimed it the greatest movie ever made because it was filmed in our area.

Q: When did you think to yourself, "I can be a director. I can be like George Lucas and Coppola"?

A: I'm still waiting for that moment. Seriously, the one thing about directing is that you can never master it. Even now, I look at dailies and think, "Is that too much?" or "Is this too far?" I'm not even talking about how you get financing or finding the right material; I'm just talking about when you go home at night and think about what you did that day, trying to piece the thread together. You're constantly in that bizarre state of mind of looking at the subdivision of the subdivision of the task.

A: Yes. At first, in the early '80s, it was hard to find work. But once you developed a reputation, you could count on work coming to you. And I'm not talking about good, choice jobs; I'm talking about fairly meager jobs. For me, though, directing videos was always about the degree of difficulty and level of involvement. A lot of people would just line a band up against a wall and film them playing their instruments. I always hated that. I'm amazed at what musicians can do with their fingers, but after 12 or 15 seconds, I'm done. I was using my time then as film school, to be honest. I was always trying to do short films in my videos.

Q: You eventually directed videos for high-profile artists like Michael Jackson, Madonna, Aerosmith, The Rolling Stones and others. Do you have a favorite band from your time directing music videos?

A: No, not really. I loved bands that would have never hired me to do their music videos, like U2 and The Clash. But I grew to have an incredible fondness for the people who would hire me. I looked at directing music videos like being in a sandbox for me to play in.

A: I did 'em all -- Pepsi, Coke, Levi's, Maxwell House, Chanel. A lot of Nike and Adidas. A lot of commercials are very goofy because there's this sort of extra feature that advertisers pay for which is the overthinking of a brand's importance. Advertising is a huge industry, especially when I was doing commercials in the '80s when things were flush and the economy was booming. A lot of the industry was about getting the message out there and the crafting of that message, and then there was the absurdity of what was being communicated and the windfall it would lead to. I was just a hired traffic cop to get shots to turn over to someone else, and I got bored with that pretty quickly. I don't like working for The Man. It's OK if you can compartmentalize it, but I could never slum. I wanted my time to be put toward either learning or testing myself.

Q: After that came "Alien 3," your first job directing a feature film. That was followed by movies like "Se7en," "The Game," "Panic Room" and "The Girl With The Dragon Tattoo." You also directed "The Curious Case of Benjamin Button" and "The Social Network," films for which you received Academy Award nominations for Best Director. Was it a happy set on "The Social Network" with all those 20-somethings around?

A: The fun of "Social Network" was that because we were talking about 20-somethings, and because that was the world of the movie, we could go out and cast anyone. To me it's like "American Graffiti" when you think of Jesse [Eisenberg], Justin [Timberlake], Rooney [Mara] and all those people in the same place at the same time. Here was a bunch of 25-year-olds who are coming to work everyday, wanting desperately to be there and ready to work. That's what was fun.

Q: Was it fun being nominated for Best Director a second time because of the film?

A: It's really nice. More than pleasant. But I was happier for the cast. When you get a cast like that and get out of their way, it's kind of weird throwing your arm out of socket patting yourself on the back. I don't like to be the focus of attention.

Q: How do you bring the best out of the actors you work with?

A: Depends on the actor.

A: I think Ben is very much like his character in that he wants you to like him. He likes to be liked. And I don't think that's specific to Ben; actors want affirmation that what they're doing is worthwhile, especially if you're going to make them do something 35 times. I find Ben to be very playful and funny. He's very bright and, like anyone who takes what they do seriously, he wants to make sure he's going to make the thing better.

Q: If someone said that David Fincher is a perfectionist, would you disagree?

A: I think there was a time and a place where I would've taken that as a compliment. There was probably a time when those would have been fighting words. But perfectionism is impossible. So when people ask me if I'm a perfectionist, I say no. Sometimes I'm asking people to do things over and over because it doesn't sound right. Sometimes it's because it doesn't look right. I don't interpret things in terms of a line reading. I'm thinking in terms of music, light and color. I sort of interpret things in a three-dimensional way. I'm trying to evoke something. You're the only person on the set who has seen the movie already, and you're just trying to get to that movie.

Q: Have there been movies that you wanted to direct, but they went to other directors?

A: That's a valid question. There's been a lot, but that's not as interesting to me as the movies you read in script form and just don't get it, and then you see the movie and think, "Ah, of course!" I get involved with things that interest me and try to get them to rise to a level of undeniability. When that doesn't happen, you walk away.

Q: When you said yes to directing "Gone Girl," was it because that the novel on which it was based was written so well?

Q: When it comes to the actual filming of "Gone Girl," I've heard there are special cameras being used. What's so special about them?

A: We are working with at least a six-pack of the new Dragon cameras that they've built. For a digital camera, they see sunlight really well. They're the next evolution of the epic.

Q: How do you like filming on location in Cape Girardeau?

A: I've found it to be extraordinary. There's a funny story about that because I told Gillian Flynn, who wrote the book, that we were going to Missouri for scouting. We scouted and got photos from Carthage, Springfield -- a bunch of other places. We needed a place where there was a downtown, access to water, a place to have a vigil, a place for a bar. I got the photos of Cape Girardeau and said this might be the place. I called Gillian and told her that I'd found a place and that it's Cape Girardeau. She said, "Oh, that's what I had in my head when I wrote the book." I said, "Gillian, you don't have to keep this stuff from me. We could've saved a couple of weeks of people driving around."

Q: Who is your favorite director of all time?

A: I don't know. It's like being asked what your favorite movie is and I have about 300 of those. Maybe George Roy Hill up until "The World According to Garp." There was a point in time when Francis Coppola was like Ted Williams. He had "The Godfather," "The Conversation," "The Godfather: Part II" and "Apocalypse Now" in a row. Spielberg had a run up until "E.T." that was astounding with five or six classics. So, I don't know. It's kind of like being asked, "What's your favorite meal?"