The following story has been submitted by a user of semissourian.com. To submit your own story to the site, click here.
User-submitted story by Tina Dohogne-Nations, Executive Director of RSVP/VIC 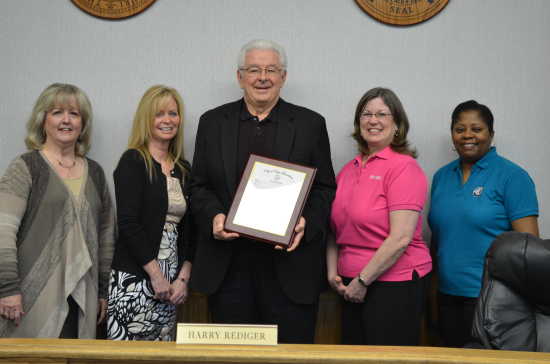 Mayors across the country participated in a national day of recognition on April 9, 2013 to highlight the impact of national service in their cities and thank individuals who serve.

This initiative was led by U.S. Conference of Mayors - President Michael Nutter, the Corporation for National and Community Service (CNCS), Cities of Service, and other organizations.

National service is a vital resource for America's cities. By unleashing the power of citizens, Senior Corps and AmeriCorps have a positive and lasting impact -- making our cities better places to live.

"Mayors are leaders who get things done, responding every day to needs in their cities," said Tina Dohogne-Nations, Executive Director of RSVP. "I want to thank all the mayors joining in this important effort to recognize the impact of national service on the critical challenges facing our cities." "This is indeed a special year for our program. The Retired Senior Volunteer Program of Cape Girardeau and Scott Counties is celebrating 40 years of service and we are proud to have several mayors acknowledging our services in their city." Again, a special thanks to Harry Rediger - Mayor of Cape Girardeau, Barbara Lohr -- Mayor of Jackson, Steve Loucks - Mayor of Chaffee, Joe Stuckey -- Mayor of Benton, Tom Urhahn -- Mayor of Oran, Tim Porch -- Mayor of Scott City, Harold Looney -- Mayor of Delta, Jerry Pulen -- Mayor of Sikeston and Larry McClain -- Mayor of Kelso for recognizing the services of RSVP.