Logging history: A look at the Armstrong home 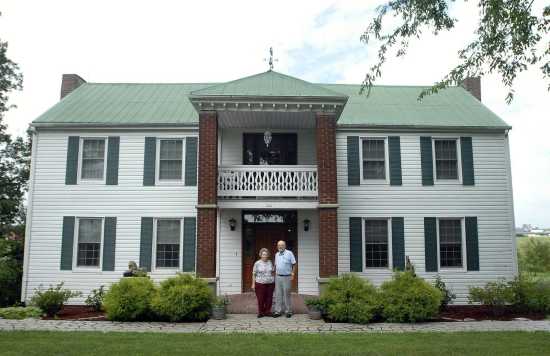 Just about everything in Carl Armstrong's house comes with its own history lesson. The arrowheads in the sitting room are from an American Indian encampment that once sat on the edge of his property. The sewing machine in the upstairs hallway belonged to his grandmother. The grapevines on the north side of the house have been bearing fruit for more than 100 years. The closet in his laundry room is actually a converted outhouse that he remembers using during his childhood.

Carl and his wife, Connie, live in Carl's boyhood home in Cape Girardeau -- a restored log cabin built in 1795 on South Silver Springs Road. The retired couple lived in Texas, North Carolina, Tennessee and back to Texas before moving back to Cape Girardeau to restore the home.

"I remember very well which steps creaked and sliding down this railing," says Carl, resting his hand on the wooden banister in the entryway. "This is where my roots are. ... There's something about living in the place you grew up. When you go through the rooms, the memories come back."

The two-story cabin, dubbed the Armstrong-Ramsey House, was built by Andrew Ramsey, who lived there with his wife, 10 children and a number of slaves. The cabin was expanded over the years to include wings on the back and south side of the house. It once sat on nearly 1,100 acres, extending to the Mississippi River. The farm is smaller today, but still holds plenty of farm and garden space, a carport/pavilion built from the remains of a collapsed barn and a pond for Carl's pet ducks.

From the outside, the house appears like any other house, except for two north windows that reveal the original logs of the cabin. Stepping into the front door and living room, however, it's clear from surrounding walls that the house is actually a centuries-old log cabin.

"We tried to preserve the historic context of the house," says Carl. The couple hired a "genius contractor" to do the work, says Connie, and it took just over two years to complete the project, which included finishing the original wood floors, repairing the fireplaces, and exposing as much of the original structure as possible. They also added modern conveniences like an elevator and a large master bath.

"We're resting right now," says Carl when asked if he has any other plans for the house.

"There's always stuff to do that you didn't get done," Connie adds. More draperies and additions to the garden are on her to-do list, and she loves cooking for her 14 grandchildren.

Carl, meanwhile, has kept busy writing a book, "The Articles of Configuration: The Genesis Project -- What Happened Before Genesis Began?" It was published in 2010.

"I'm all revved up, and I've got to keep doing something, or else I'm going to fade away," says Carl. "This place, the book -- it's all kept me busy and occupied.