Dexter Choir Director To Be Honored

The following story has been submitted by a user of semissourian.com. To submit your own story to the site, click here.
User-submitted story by Annabeth Miller 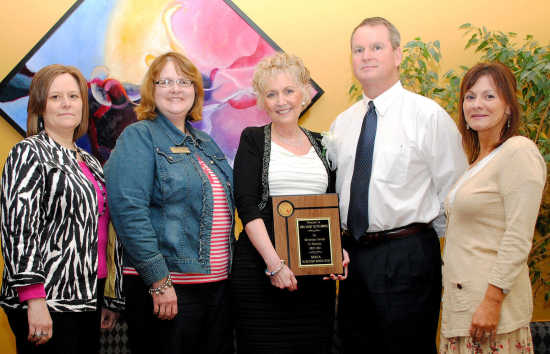 MaryRuth Boone (center) was honored this spring by the Southeast Region of the Missouri State Teachers Association with its award for Meritorious Service to Education. With Boone at the presentation were fellow Dexter educators Melinda Sweeney, Jeannie Cato, Boone, district administrators Bryce Matthews and Sherry Matthews.

DEXTER, Mo. - For nearly 30 years there has been friendship, fun times, achievements, and dedication within the Dexter High School Choirs. And now, as she prepares to step down and retire after a highly successful career, MaryRuth Boone's students have something they would like to say to the DHS choral music director: "Thank you."

To mark her years of service to the school district and community, a special tribute is being planned to honor Boone and the choral music program she shaped and led for 30 years in Dexter.

A special DHS Choir Alumni Reunion Weekend is planned for Memorial Day Weekend, May 28-29. The weekend will be a time for former and current Dexter High School choir students to gather back together to pay tribute to their former choir director and to do that thing that she taught them -- sing!

A DHS Choir alumnus Eric Mathis is spearheading this effort along with a committee of individuals in the community. According to Mathis, the weekend's focus will be the formation of an alumni choir -- a large multi-generational chorus of Boone's students.

"Given the decline of music and arts education programs in public schools systems across the country, Dexter is fortunate to have a music educator like Mrs. Boone who has maintained a choral program in the junior and senior high schools for 30 years," Mathis said. Mathis and the planning committee announced plans for the weekend prior to the Christmas holiday on Facebook, the Internet social networking site. "We need to celebrate this tradition. This is an event that no one will want to miss!"

In addition, Mathis has established a website, http://www.dexterchoir.com. The site contains information on the weekend as well as online registration and a place for alumni to post favorite stories and memories of their time in Boone's choirs.

The alumni weekend will include a day full of rehearsals and old friends seeing one another on Saturday, and a second day that will feature the hallmark of the weekend -- a special concert with the combine voices of the Alumni Choir.

"We will save plenty of time for everyone to reminisce, pay tribute to Mrs. Boone, and wish her well in future endeavors. This will also be a great opportunity for everyone to connect with former music friends," Mathis said.

The schedule for the weekend calls for the alumni to gather on Saturday morning at the First United Methodist Church for a day of rehearsals. Time will be allotted for full choir rehearsals as well as sectional rehearsals. There will also be time for small groups to rehearse if they desire. At noon on Saturday the choir will share a lunch with Boone, her husband Bill, as well as her children Andrew and Afton (who will be members of the Alumni Choir).

On Sunday morning choir members will have the opportunity attend worship services at Boone's church home, First United Methodist Church, and present the special music for the morning's worship service.

That afternoon, the choir will gather at Dexter's First Baptist Church for a dress rehearsal and then a public concert in the church's Worship Center. A reception honoring Boone will follow the 3 p.m. concert, and the public is invited to attend the concert and reception.

Planning Committee member Mark Snider said the weekend is, of course, no longer a complete surprise for Boone.

"MaryRuth has asked that she be able to 'relax and enjoy' the weekend, so the musical leadership for this event is falling in the hands of the next generation," Snider said. "Eric Mathis will be directing the mass choir during the concert, and Delisa Stites has agreed to accompany the choir on the piano. This is going to truly be a time for everyone to sit back and enjoy the musical tradition MaryRuth has established in our community."

Through her 30-year tenure at Dexter High School Boone's choirs and choral students have consistently received top state ratings at Missouri State Music Contest, performed at the Missouri Governor's Inaugural in 2005, and an ensemble from the Chamber Choir sang during opening ceremonies last month for Opening Day Ceremonies for the Missouri State Senate in Jefferson City.

Choirs have performed in the historic Church of St. Mary Aldermanbury at Westminster College, in the St. Louis Cathedral, and presented each year the Christmas season tradition of the DHS Choirs Madrigal Feast as well as each spring's annual Pop Concert.

In 2005 she led a group of choral students on a concert tour of England, and the Dexter Show Choir has been invited to perform at Disneyworld and performed in Branson, Chicago, New Orleans and this June will perform in New York City.

Boone was recently honored by the Dexter Chamber of Commerce as the Educator of the Year and was recognized in January for her service to music education in the state by the Missouri Music Educators Association. In addition, in March she received the Meritorious Service to Education Award from the Southeast Region of the Missouri State Teachers Association.