Dog blessed: Roberta Beach returns the favor after a dog helped her through hard times 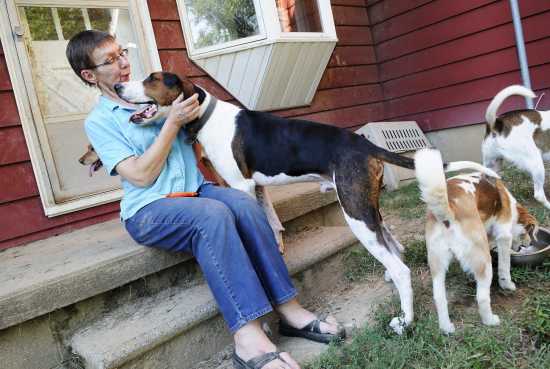 Roberta Beach, owner of Silverwalk Hound Sanctuary in Cape Girardeau, plays outside with the dogs on Friday, August 6, 2010. Silverwalk is a home-based dog sanctuary that rescues, fosters, and finds homes for beagles, hounds, and senior dogs. Beach currently has 19 dogs on site, 5 of which are hers personally. (Kristin Eberts)

This story appears in the September edition of TBY magazine, available in Tuesday's Southeast Missourian.

As Roberta Beach recovered from a fourth cancer surgery, a friend came to live with her and changed her life. The friend, a beagle mix named Oliver, came home with Beach at the suggestion of her mother, who said she thought the dog might help her daughter's recovery.

Between 1985 and 1998, Beach intermittently fought squamous cell carcinoma of the tongue, neck and jaw with radiation therapies and multiple surgeries. After one surgery, she was left unable to speak for a period of time and breathed through a tracheotomy tube for over two months. Beach said at one point, she had a free flap surgery which took bone from her leg to reconnect her jaw. "I can say my leg bone is connected to my head bone," she now says with a laugh.

Beach's relationship with Oliver helped her overcome the difficult physical condition she was in due to her cancer, she said. She began walking him every day, until they were walking five times a day. As time went on, she said, she isn't sure she would have recovered so well if she hadn't been taking care of the dog. It wasn't long before another beagle mix, Emma, needed a home. Beach took in the dog, and her love of hounds took over."My whole life, I had always been a horse person," Beach said.

Beach owned two horses at her home north of Cape Girardeau, Silver Dancer and Luke Skywalker, when she got her first dogs. Her neighbor helped take care of the horses during the time she was sick, and by the time she was doing better, she said, she just kept adopting dogs. She decided she wanted to start a rescue, which she named Silverwalk Beagle and Hound Sanctuary, after her horses. Beach has officially run a shelter out of her home as a state licensed, not-for-profit rescue since 2007.

Beagles and other hounds are dog breeds which are particularly at risk and in need of rescue in the southern region of the United States, she said, because in rural areas many people do not tend to spay or neuter their pets. Beach devotes all of her time she is not working as a registered nurse in Saint Francis Medical Center's intensive care unit to her cause for the dogs. Since she began the rescue, she estimates she has had at least 60 dogs in her care.

In April, her rescue became a division of Safe Harbor Animal Sanctuary in Cape Girardeau County. Beach is the board secretary at Safe Harbor and also volunteers there weekly. An important aspect of Beach's life, and her work as a rescue director, is her faith, she said. Beach is also a licensed healing minister at a local Episcopal church. "An important part of who I am is prayer," she said.

Prayer and talk of creed at her church helped Beach develop her personal motto: "Dedicated to God, serving in prayer, healing and animal welfare." Several years ago, she said, she visited monasteries to see if she was suited to become a member, because she has felt since her teenage years that she would lead a solitary life. Instead, she decided to live with an emphasis on daily prayer. She said she prays for her patients and could not do her rescue without the assurance of prayer and a personal belief that "all will be well."

Beach does not plan for her care of dogs to end just because she no longer has certain ones. For dogs that have passed away while in her care, she said, she plans to create a memorial labyrinth in her yard using their ashes. A labyrinth, she said, has a path which allows one to focus on the walk and prayer while leading one to the center. Beach currently has five of her own dogs and 14 adoptable dogs at Silverwalk Hound Sanctuary. 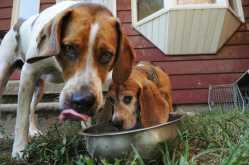