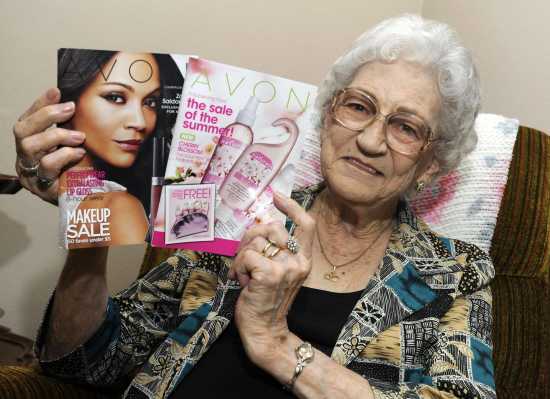 Naomi Crain remembers visiting her aunt's house as a child, sneaking away from her mother's supervision, and smearing rouge all over her face. Now 87, the Cape Girardeau woman has learned more subtle makeup techniques and has been selling Avon makeup for 58 years.

"I do like makeup, ever since I was a little girl," she says. "Now I need it to cover my brown spots, my age spots. I do like selling it. I've made a lot of friends over the years."

Crain first began selling for Avon at the request of a friend and stuck with it. Since then, she's sold while living in Jackson, Paducah, Ky., and Cape Girardeau.

"I needed something to do, and I enjoy it," says Crain. "I like makeup and I like selling it. Avon has treated me fine." In fact, Crain has collected hundreds of Avon gifts and prizes for sales achievements and years of service. Among her favorites are the "Albees" displayed in her living room. Mrs. Albee was Avon's first sales representative in the 1880s and is known for pioneering the company's direct selling method. For years, Avon presented Mrs. Albee figurines to high-achieving Avon ladies like Crain.

"You've got to be friendly and wear your product. That's very important. Know your product so you can tell people about its benefits," says Crain, adding that free samples can go a long way. "That's the way to sell it. It gives a personal touch to show the items. Avon also has a guarantee -- if for any reason you don't like a product, they will take it back. That's an important basis of selling."

When Crain first began selling Avon, her biggest sellers were perfumes and deodorants; today, face creams and shower gels are in high demand. But one item that never goes out of style is lipstick. It's been noted before that even in dire economic situations, women will always splurge on lipstick, and in 58 years of selling, Crain has found this to be exactly right.

"Sometimes women would not buy anything but lipstick," she says. "Women who don't use eye shadows or eyebrow pencils will buy lipstick because they do want to look defined, especially if they're looking for a job or a boyfriend."

Crain does not yet have plans to retire -- but if she did, her loyal customers might not let her get away with it.

"I've said before that it might be time to quit, but they say, 'No, you can't quit! Where would we be without you?'" says Crain.