The following story has been submitted by a user of semissourian.com. To submit your own story to the site, click here.
User-submitted story by Mark Bliss, Southeast Missouri Hospital 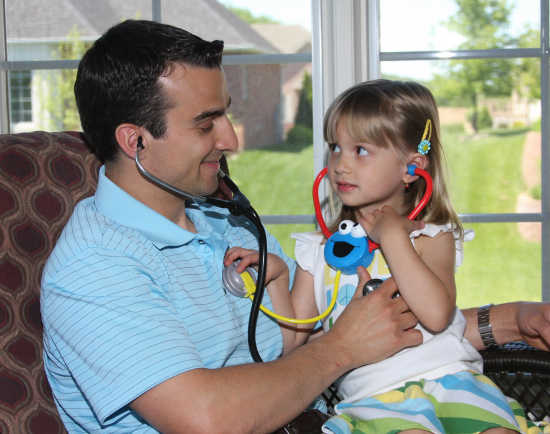 Vincenzo Galati, DO, plays “doctor” with his 4-year-old daughter Vita.

Of course, he had some good teachers. His parents, Salvatore and Vita Galati, have operated an Italian restaurant for decades. They operate Galati's Italian Ristorante in Perryville, Mo.

While growing up, Dr. Galati schooled in Sicily during the first and seventh grades. "My parents wanted to move back to be with our family who had moved back to Sicily, but finding an honest job with honest pay was very difficult on both occasions, so our family had to move back to the U.S.," he says. Not surprisingly, Dr. Galati is fluent in Italian and Sicilian dialect, which is what is spoken at most of his family get-togethers.

Dr. Galati practically grew up in the pizzeria. "I started working at the family business making pizzas when I was 13," he remembers. "My brother Joe and I both did that."

As a benefit of his Italian heritage and upbringing, Dr. Galati loves to cook a variety of other dishes, especially different types of pastas. "Getting together with the family for meals is a big event and a very important part of our family life," he notes.

Dr. Galati is certainly a family man. He loves spending time at home with his wife, Stephanie -- his high school sweetheart -- and his two daughters, 4-year-old Vita and 19-month-old Caroline. In Sicilian families, it is a tradition to name your children after your parents. He adds, "My wife is truly an amazing woman and has been my best friend since I met her; she does a great job teaching and taking care of our girls as well as the rest of the stuff around the house."

Dr. Galati, who practices medicine with Urology Associates Inc., graduated from St. Vincent High School in Perryville, Mo. He played basketball in high school. These days, he loves to play on a different court, a tennis court. He also enjoys playing golf from time to time, as well as soccer. "I'm a big World Cup fan," he adds. "I pull for Italy and the USA."

He was fascinated by the science of medicine from the time he volunteered at Perry County Memorial Hospital as a high school student. He subsequently worked as a nurse's aide and continued volunteering and shadowing other physicians.

He proposed to his wife in 2000 on a beautiful hilltop in Sicily (Castellammare del Golfo). He later decided to paint the view they had looking out over the picturesque houses and the vivid blue Mediterranean Sea. The couple had married and were living in Oklahoma City when he decided to paint the scene as a Christmas present to his wife.

He painted the picture in an unheated shed in the middle of November. "It was freezing," he recalls. Despite the challenge of keeping the pigments from becoming too hard in the cold, he finished the painting. It now hangs proudly in the Galati home, a reminder of his family's rich cultural heritage.