The GOP Candidates Punt On the Failed War On Drugs 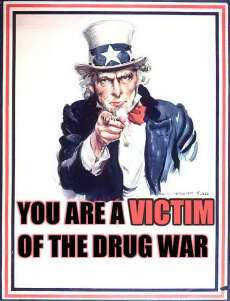 (NOTE: an abridged version of this blog will appear in print as a "paid letter" in a future edition of the Southeast Missourian. I have posted it here for public discussion purposes)

I have been following the recent scuttlebutt between the incumbent and her GOP rival Bob Parker's supposed support for an end to the failed war on drugs with a heavy dose of loathing and amusement.

The Libertarian Party has consistently denounced the failed war on drugs on constitutional, moral, and economic grounds for 41 years. Here are a few facts...

* 70% of the prison population is minorities

* Legalizing drugs would inject $76.8 billion/year into the U.S. economy

As a Libertarian and member of Show-Me Cannabis Regulation, I have been involved in numerous drug war repeal efforts for many years. I recognize a fellow sympathizer on this matter. No disrespect to Bob Parker, but he does NOT support the legalization or decriminalization of any illegal drugs at any level. This suggestion by Jo Ann Emerson is laughable. If Bob Parker shared my opposition to the failed war on drugs, I would suspend my own campaign and endorse him.

I welcome any adult discussion regarding the failed war on drugs. The editors of the Southeast Missourian chose not to contact me on an issue on which I am educated, am passionate about, and is a cornerstone of my campaign. Instead they saw fit to diminish the libertarian movement and the significance of an issue that has had a negative effect on our society, and debase it to a juvenile diatribe worthy of supermarket checkout lane tabloids.

I repeat: BOB PARKER DOES NOT SUPPORT AN END TO THE FAILED WAR ON DRUGS!

Obviously the incumbent regards this important issue as cheap political fodder to scare and dupe voters into electing her to a ninth term.