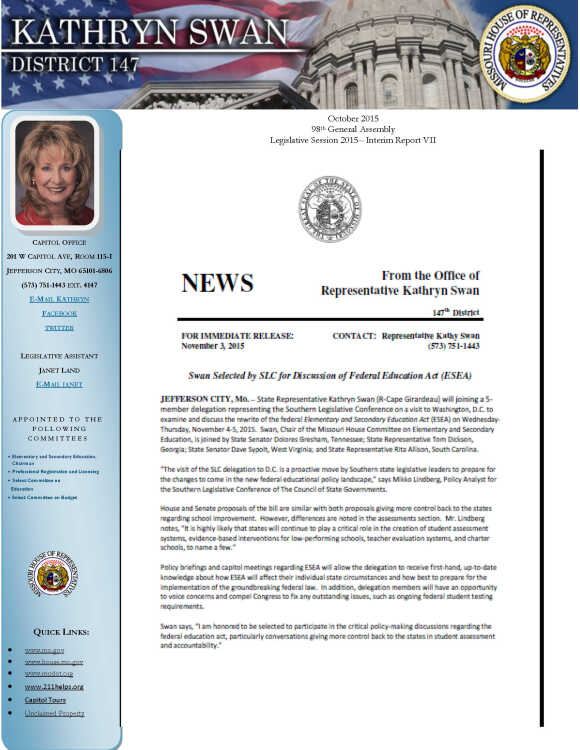 NEWS From the Office of Representative Kathryn Swan

"The visit of the SLC delegation to D.C. is a proactive move by Southern state legislative leaders to prepare for the changes to come in the new federal educational policy landscape," says Mikko Lindberg, Policy Analyst for the Southern Legislative Conference of The Council of State Governments.

House and Senate proposals of the bill are similar with both proposals giving more control back to the states regarding school improvement. However, differences are noted in the assessments section. Mr. Lindberg notes, "It is highly likely that states will continue to play a critical role in the creation of student assessment systems, evidence-based interventions for low-performing schools, teacher evaluation systems, and charter schools, to name a few."

Policy briefings and capitol meetings regarding ESEA will allow the delegation to receive first-hand, up-to-date knowledge about how ESEA will affect their individual state circumstances and how best to prepare for the implementation of the groundbreaking federal law. In addition, delegation members will have an opportunity to voice concerns and compel Congress to fix any outstanding issues, such as ongoing federal student testing requirements.

Swan says, "I am honored to be selected to participate in the critical policy-making discussions regarding the federal education act, particularly conversations giving more control back to the states in student assessment and accountability."