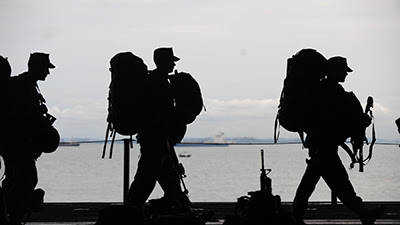 Scams can affect any consumer, but military personnel and their families are statistically more likely to fall victim to costly and embarrassing fraud. This is particularly true of active-duty servicemembers.

The Scam Tracker report notes that active-duty military personnel are often targeted for their youth and steady paychecks, and military families are often required to put faith in others while juggling deployment and frequent moves, which leaves them particularly vulnerable. Nearly 10 percent of reports submitted to BBB Scam Tracker in 2018 came from the military community.

Employment scams and home improvement scams are the two riskiest scams for the military community, according to the Scam Tracker report.

Military reservists and National Guard members, as well as recently separated active-duty personnel, should be wary of employment scams when looking for a job after a deployment or discharge. Scammers will ask for money with your application, or will ask for personal information before you are hired. Commonly impersonated organizations include the Internal Revenue Service and other government agencies.

Home improvement scams are particularly risky when servicemembers find themselves needing to arrange for home repairs during a deployment. Fly-by-night contractors often go door-to-door to offer assistance with concerns they claim to have noticed around your house; this is a particular concern after storms, when such contractors to help victims clear debris or patch up homes. In reality, they take the consumer’s money and disappear without performing any work.

Military personnel and other consumers also should be aware of substandard business practices by home contractors. In BBB St. Louis’ service area, general contractors and home improvement businesses were the third most complained-about business category for complaints in 2018, with more than 2,400 complaints about such businesses processed by BBB St. Louis. Common complaints included failure to perform work as contracted or issue a refund and delays in completing projects in a timely manner.

Online purchase scams also ranked as a high-risk scam for military personnel in the Scam Tracker report. For the general public, they ranked as the second-riskiest scam of 2018. Consumers targeted by this scam reported paying money for goods that never arrived and being unable to make contact with the vendor to get a refund.

Housing rental scams also are of concern to military personnel, especially active-duty military undertaking a change of station and conducting a housing search from afar. These scammers commonly lure consumers with beautiful pictures, great amenities, low rent and a sense of urgency. In reality, the home is already rented or doesn’t exist, leaving the victim out hundreds of dollars and potentially without a home.

BBB advises military personnel -- and all consumers -- to follow these tips in order to avoid being defrauded: