Dixon Springs putting on a show of Indian pink wildflowers 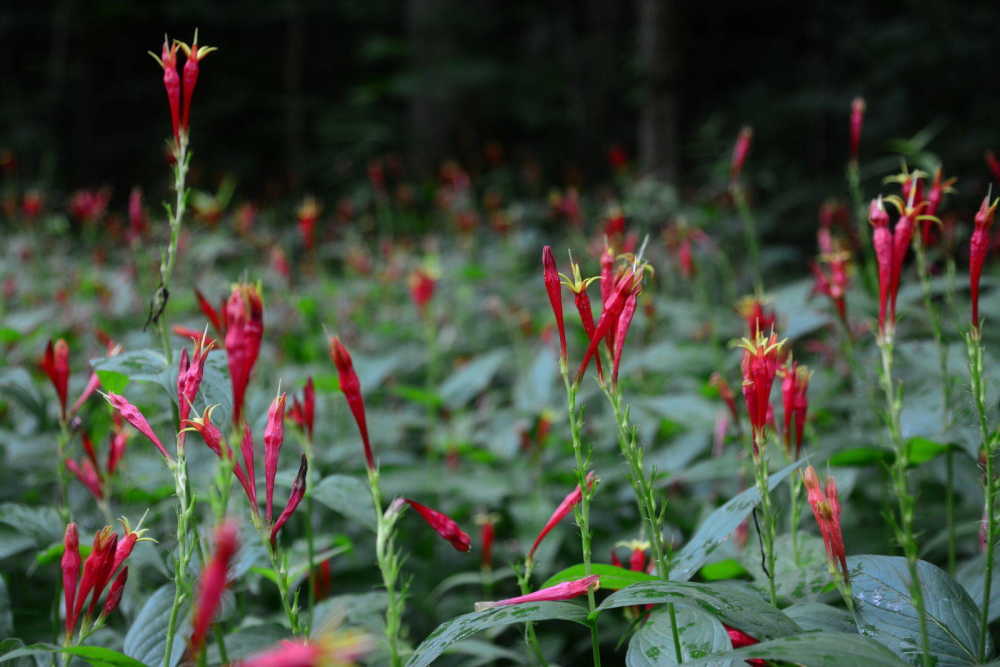 The Ghost Dance Canyon Trail at Dixon Springs State Park in Illinois is an excellent destination in all four seasons.

I had seen chatter on Facebook lately about wildflowers blooming there, so I decided to check it out. When I visited last weekend, the entrance to Ghost Dance Canyon indeed featured a dazzling patch of Indian pink flowers. 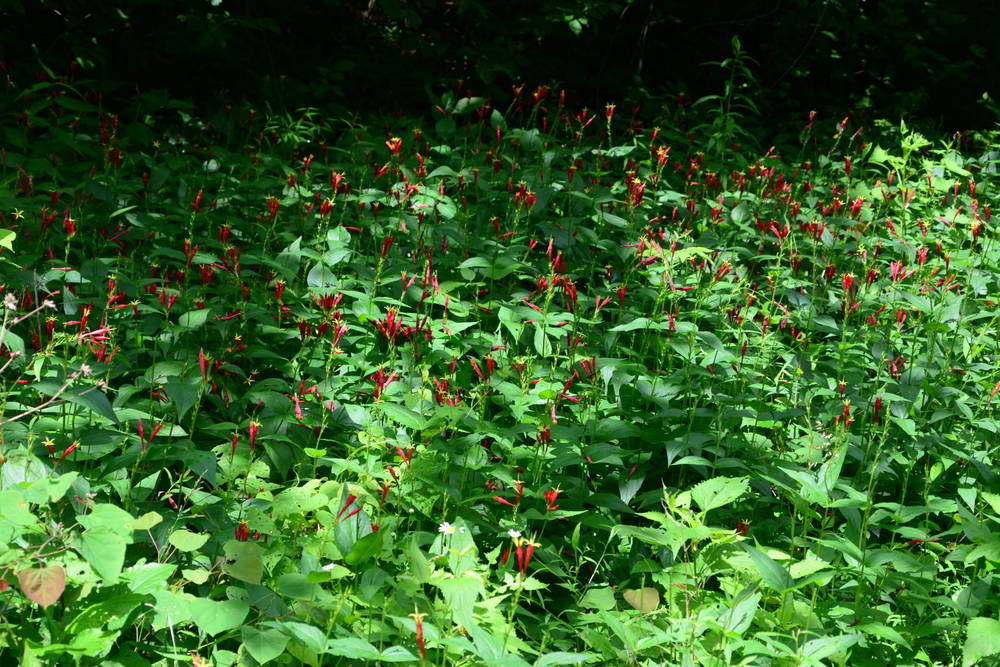 Also known as woodland pinkroot, this plant produces red and yellow blooms in late May and early June. It's native to extreme southern Illinois and Missouri. 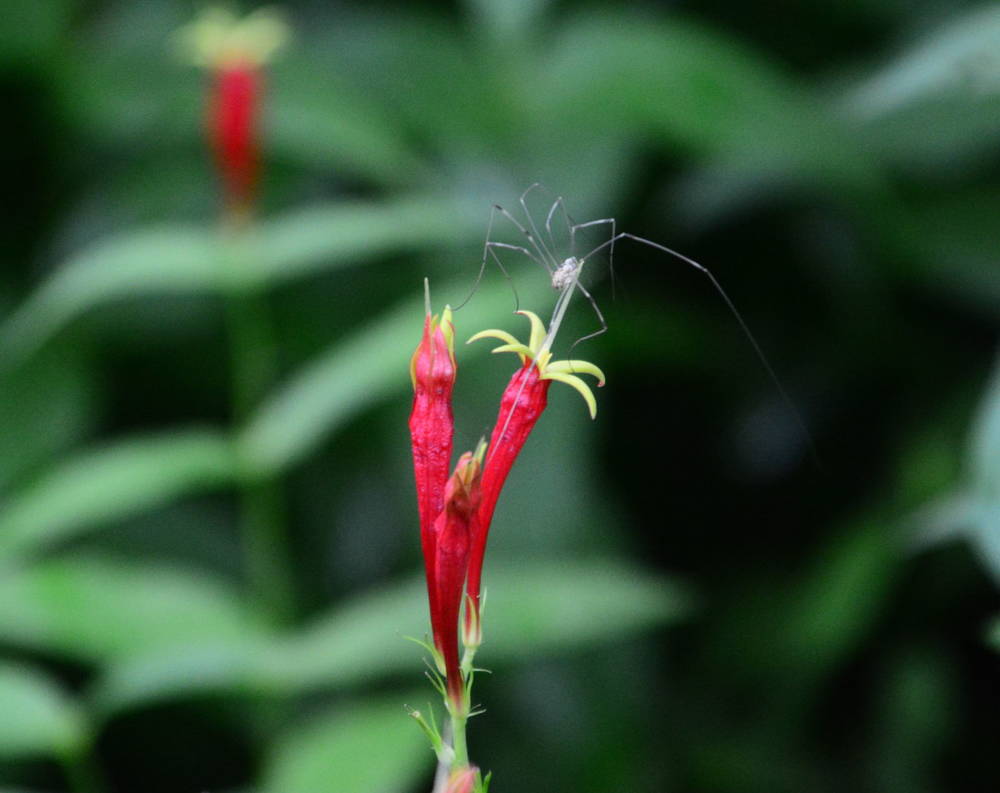 The patch is located just past the trailhead, but prior to passing under the big arch bridge. 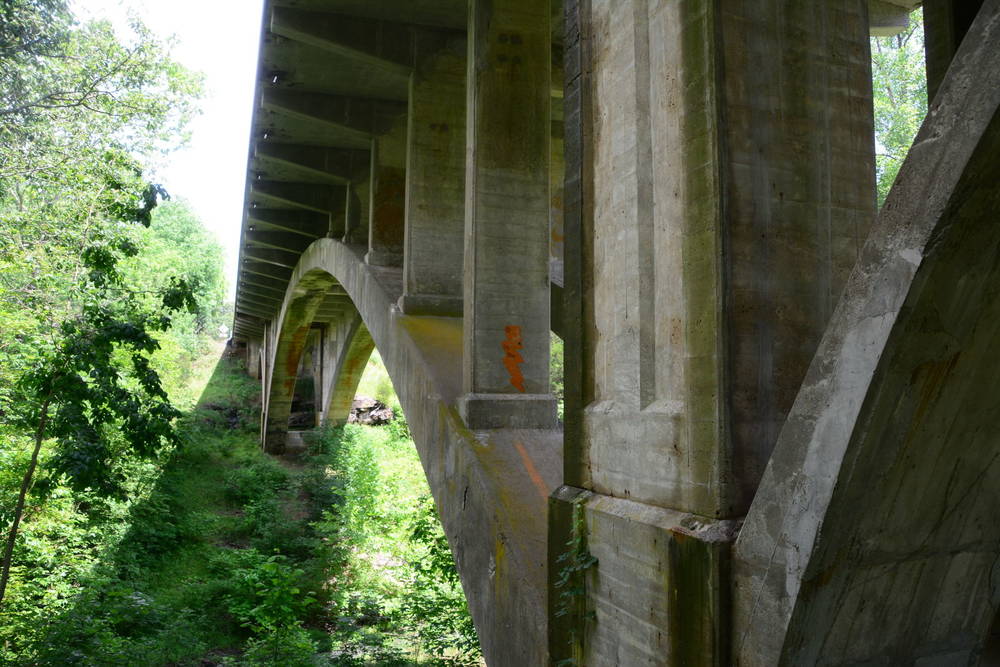 High water and slick-as-snot rocks made it difficult to explore very far into Ghost Dance Canyon. I decided to head toward the other end of the park and explore the Bluff Trail instead. The trail came to a creek crossing that was too wide to jump across, but as I searched for another way across, I stumbled on another stand of Indian pink at the coordinates 37.389356, -88.659842. 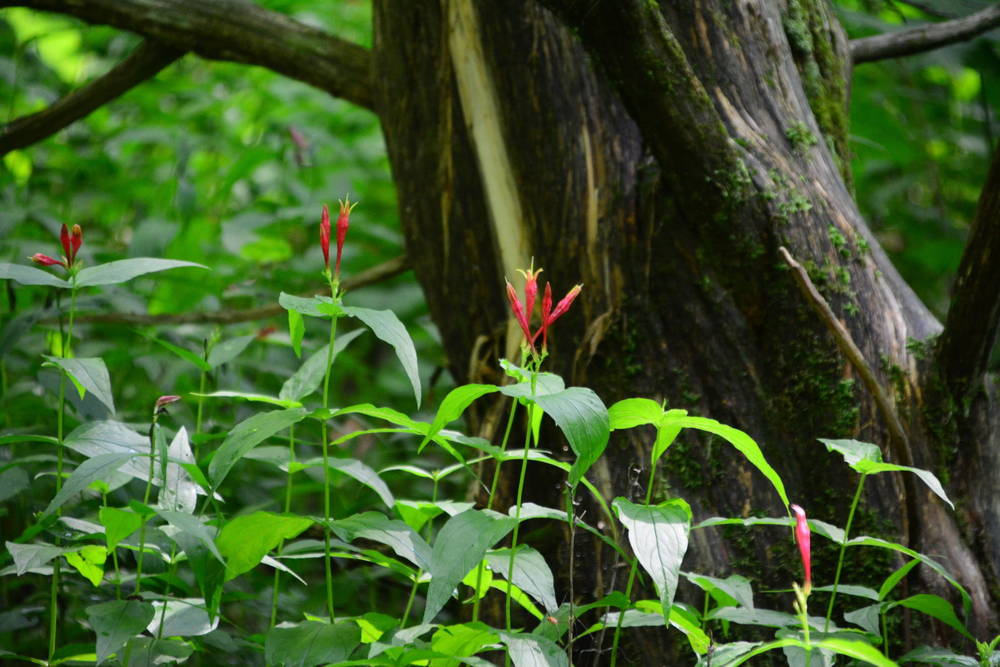 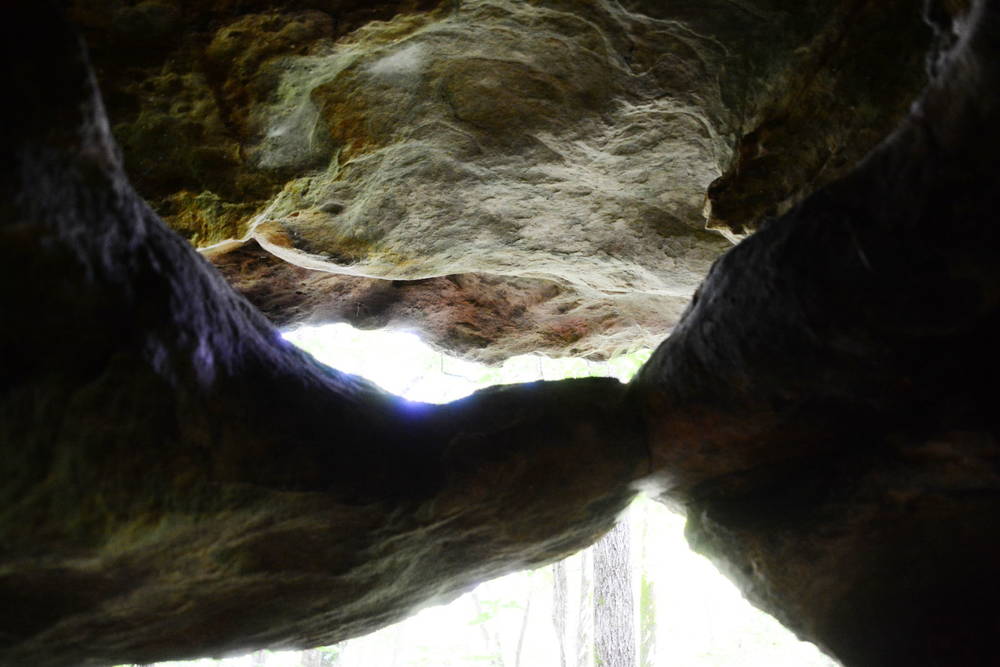 Continuing to the east, the trail reaches a tight crevice between rock monoliths. 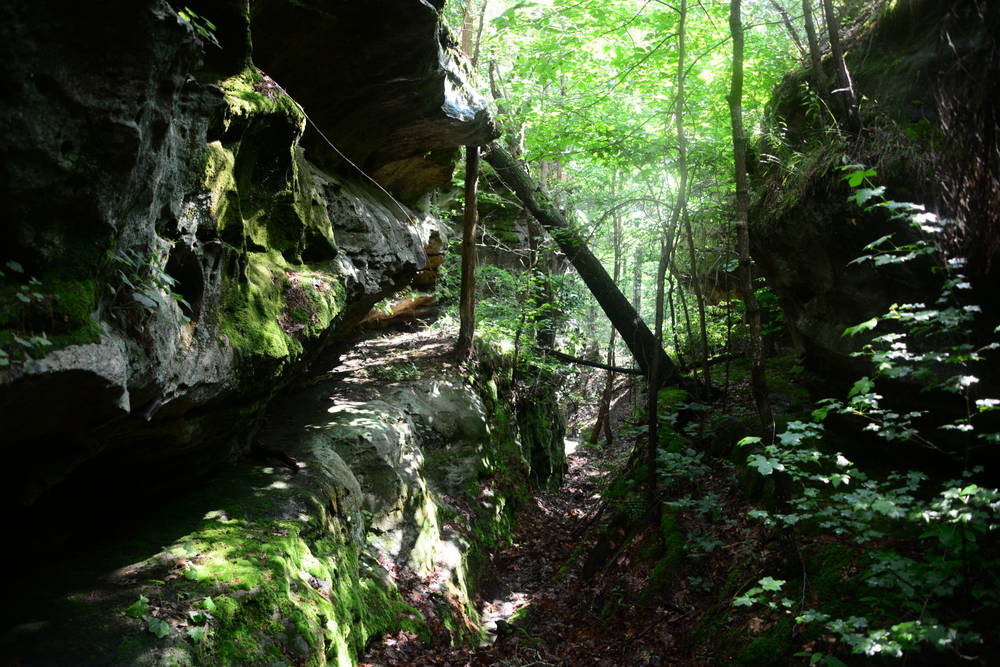 The trail eventually leads to the edge of the park. Another trail, the mysteriously named Red Dog Trail, continues to follow the bluff line within National Forest land. Here I found an old wooden ladder leading to a hiding spot (coordinates are 37.392516, -88.653158). With some of the rungs rotted away and the whole thing looking rather disreputable, I didn't try to climb it. 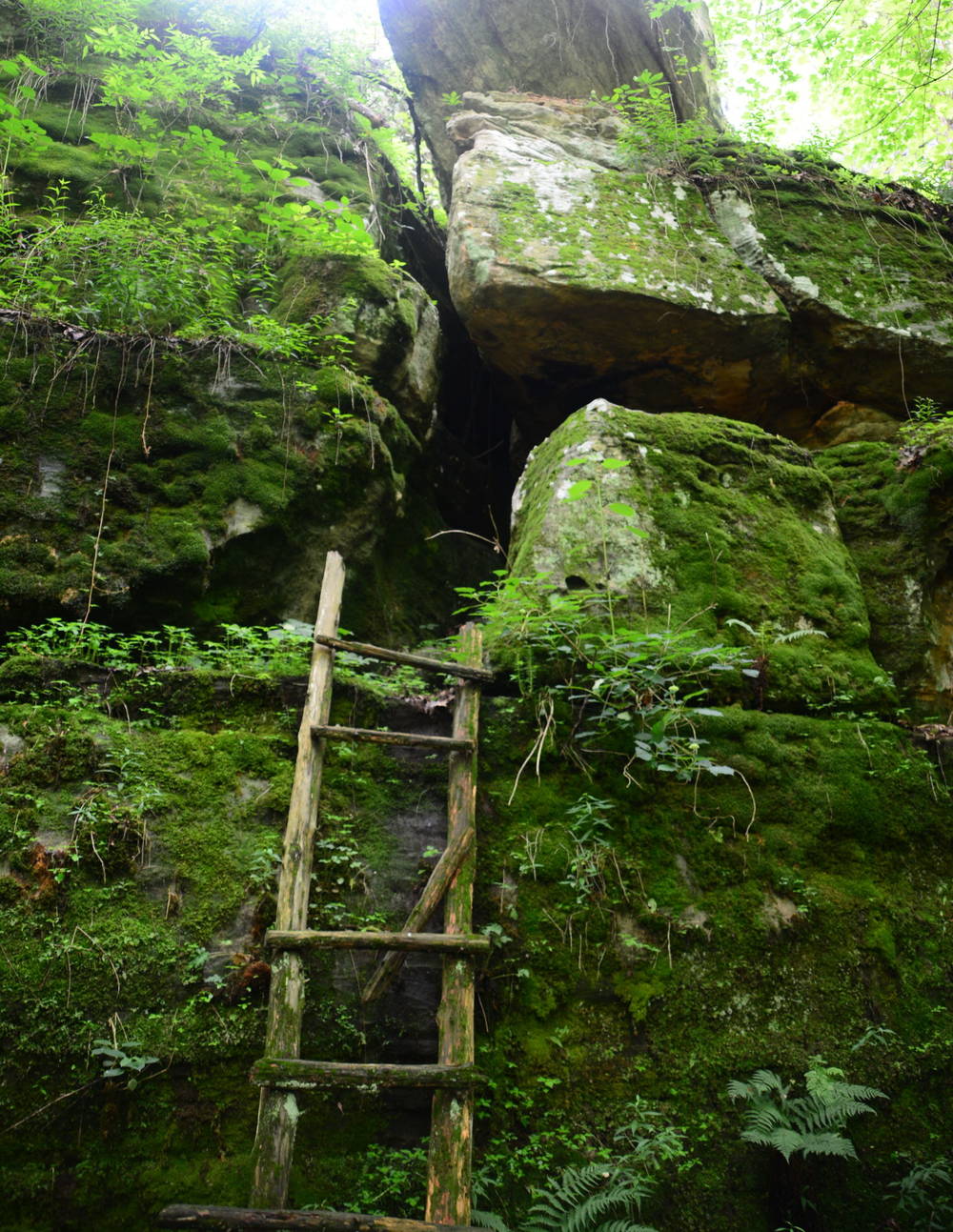 Soon after, a sudden thunderstorm arrived, cutting the hike short. After crouching underneath a small rock shelter to wait out the rain, I returned to the main picnic area. At least the Dixon Springs dam was flowing nicely. 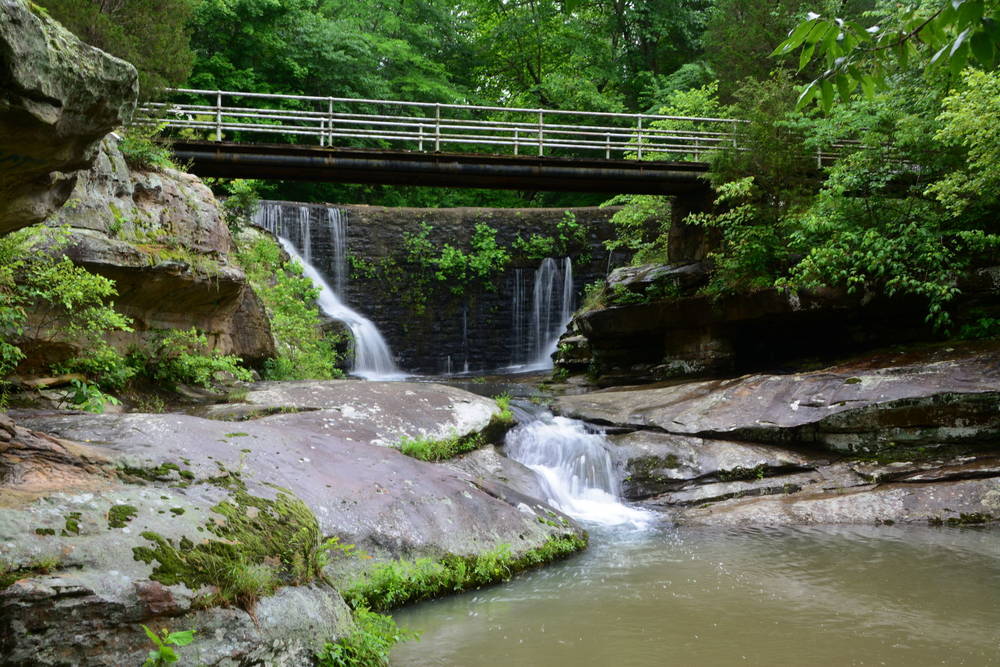 With the Indian pink only blooming for a short time in June, now is the time to visit Dixon Springs if you want to catch these colorful flowers.

From Cape Girardeau, follow Highway 146 east through McClure, Ware, Anna, Vienna, and on to Dixon Springs. Look for the park entrance on the left. Park near the swimming pool. Hike across the small concrete bridge beyond the swimming pool and look for the beginning of the trail. The patch of Indian pink is just down the trail.

To reach the Bluff Trail, look for the turnoff for Bluebird Lane and drive past the three historic churches. Just before reaching the sign that says "Leaving Dixon Springs", turn right and park in the parking lot. Hike past the gate and follow the signs for the Bluff Trail, which makes a loop. The hike can be extended by following the Red Dog Trail.