Editorial cartoons haven't changed much over the years 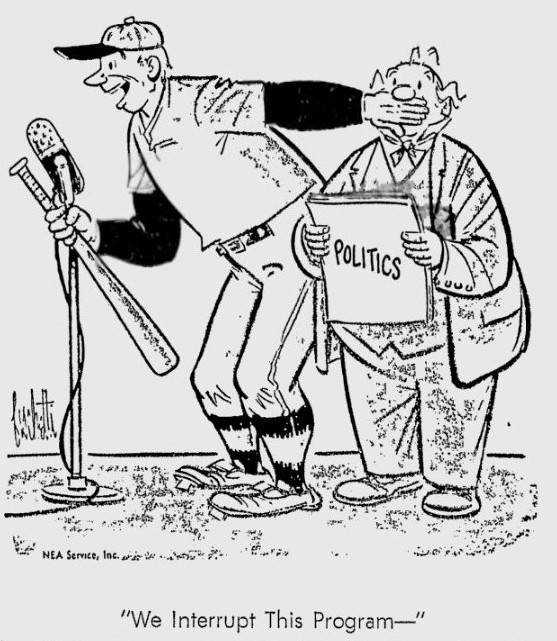 "I just need to double-check this one news article from 1921," you tell yourself. "This will only take a minute."

Yeah, right. You know darn well that you're going to get sidetracked looking at everything else in the newspaper.

Then there's the crazy headlines. "Guests At Fatty's Frisco Fete Hastening To Get Under Cover." What does that even mean?

There's the sports standings. Naturally, the Yankees are in first place.

There's the advertisements in the guise of public safety announcements. "Telephone Cords Must Be Kept Dry," says Bell Telephone Co.

Finally, there's the editorial cartoons. Oh, so they had problems with tariffs back then, too.

Before you know it, you've been browsing random newspaper pages for three hours, accomplishing nothing. You've managed to make notes on several interesting items that might be useful for future research -- but, alas, you also know that you'll probably misplace or forget those notes before you have a chance to do anything with them.

This is the peril of historical research, shared by everybody who dares venture into the Google or Library of Congress newspaper websites.

Yes, I've spent way too much time looking at old newspapers. In an effort to recoup some of this effort, I've compiled some of the more interesting editorial cartoons that I've run across in the Southeast Missourian archive.

Many of the issues tackled by old political cartoons remain as relevant as ever. They poked fun at taxes, Congress, Russia, crime, and the economy, just as we do today.

Tariffs, for example, were a hot topic during the 1920s. This cartoon from Aug. 5, 1922, labeled a Tariff Bill as a "Self-Imposed Frankenstein": 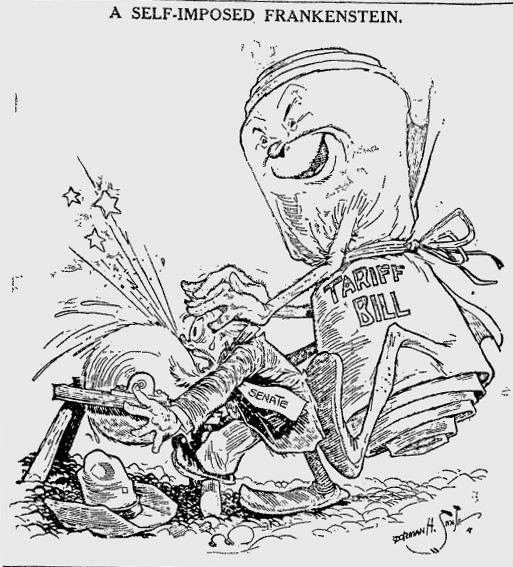 The next cartoon, which accompanied a Dec. 6, 1920, story about the opening of the next Congressional session, showed four problems that greeted the new Congress (foreign relations, tariff, cost of living, and taxation): 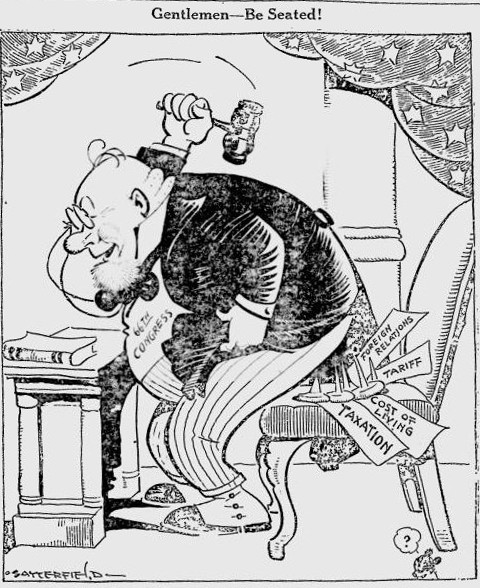 In a similar theme, an illustration from July 1, 1921, depicted President Harding dealing with "The Log Jam." The logs represented employment, agriculture, foreign trade, business, and railroads: 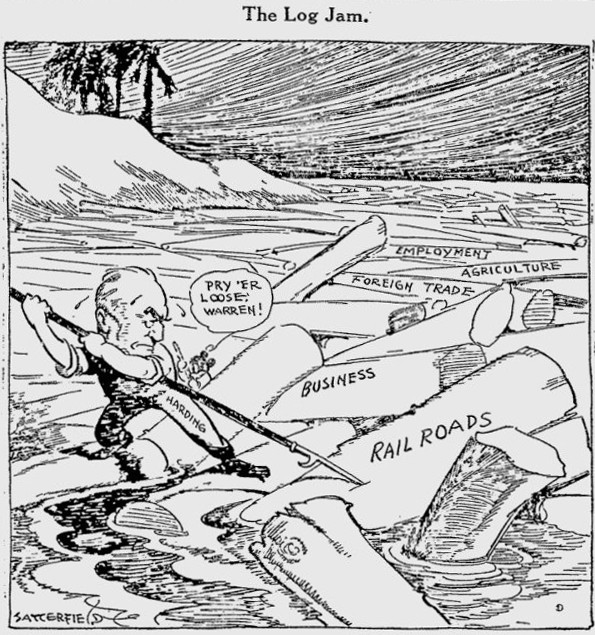 Crime was another sore point. An item from Jan. 7, 1921, portrayed St. Louis as full of shootings and other mayhem: 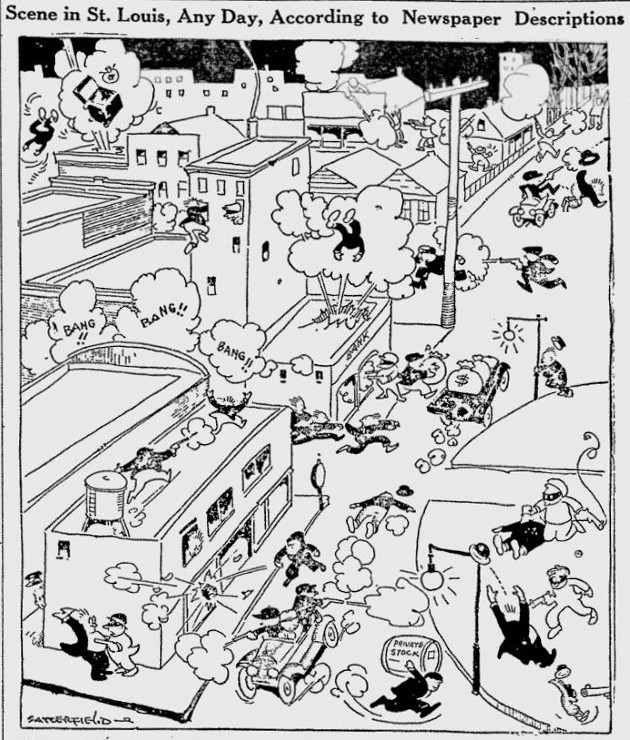 A recurring theme was to show the public caught in the middle between competing forces. In the case of a cartoon from July 28, 1922, the public is trapped between "Capital" and "Labor": 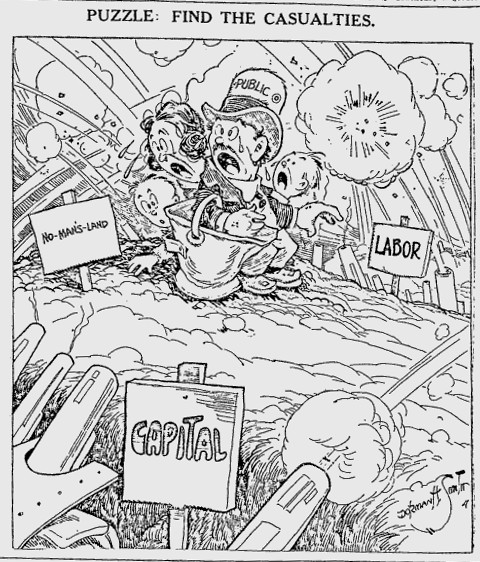 A drawing from April 4, 1920, showed "The People" stuck outside of the political process, forced to pay for whatever scheme Congress cooked up next: 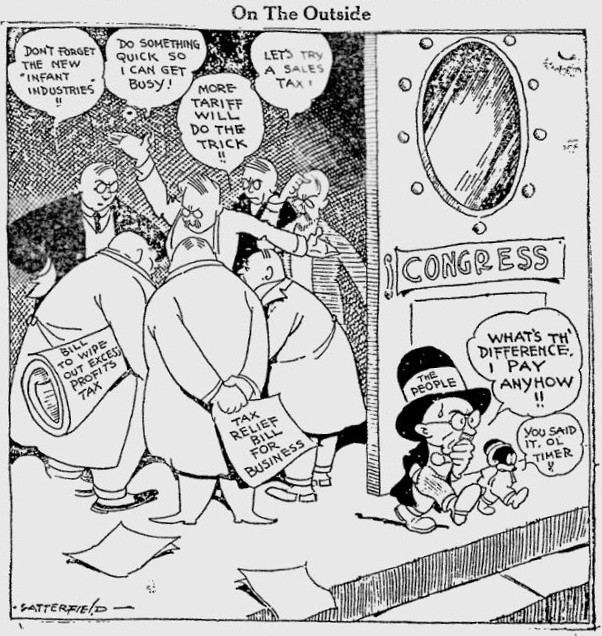 Cartoonists back then were worried about Russia, typically depicted as a bear running roughshod over the countryside. From Dec. 4, 1920: 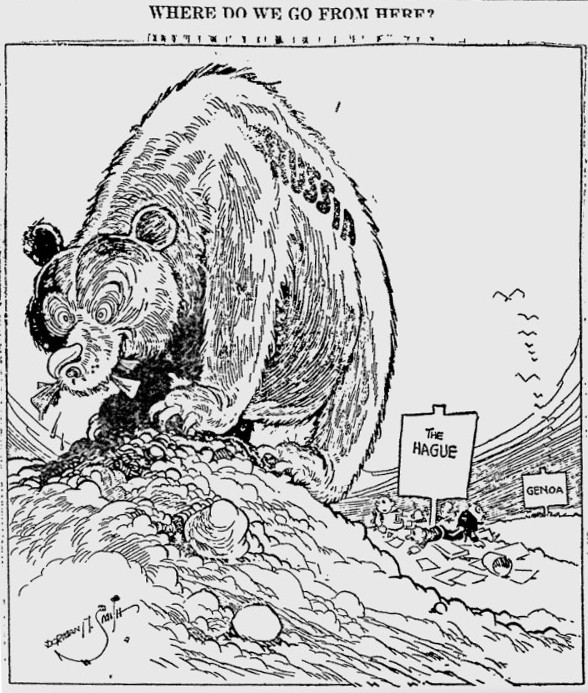 This cartoon from July 20, 1922, could be re-published today, and it would still make sense: 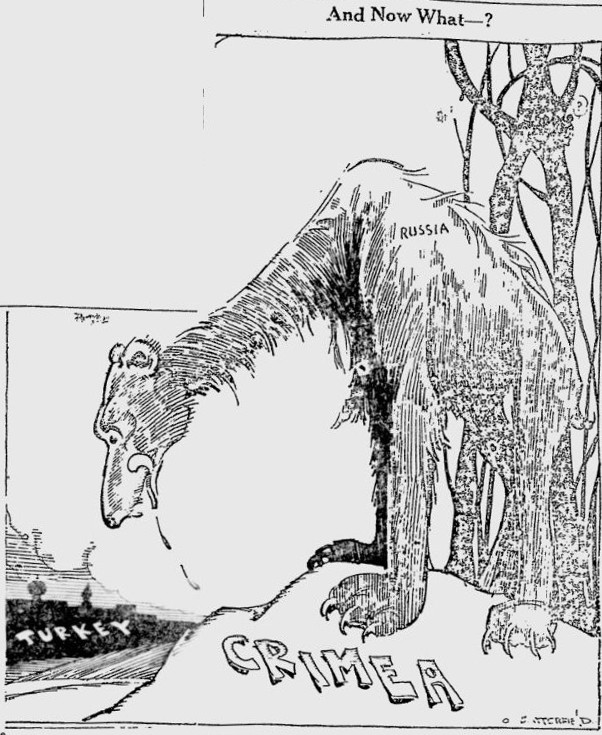 There was optimism that war could be vanquished through international arms control. It's too bad this cartoon from Dec. 2, 1921, failed to pan out: 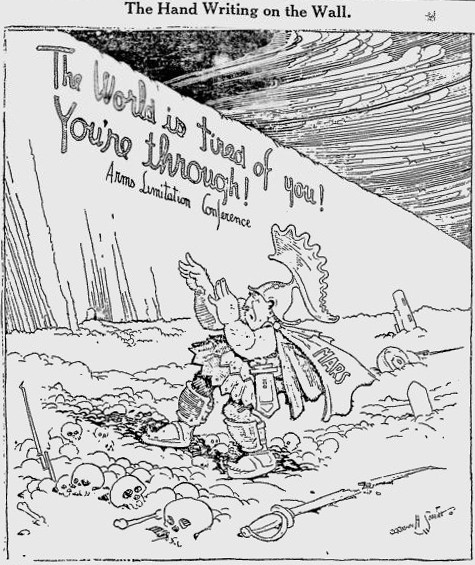 This satire from July 5, 1922, showed what inevitably happens when the economy is booming: 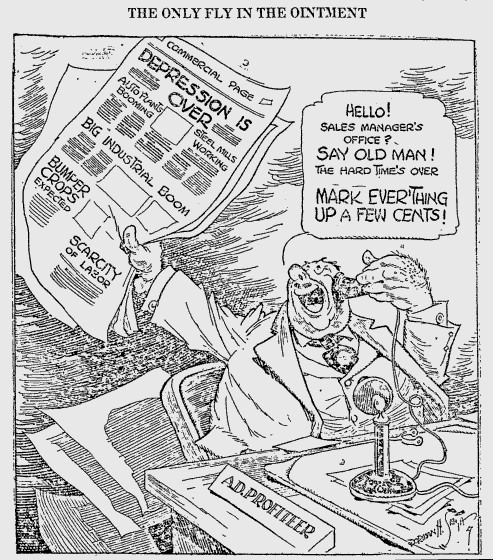 Here's a cute sketch from July 31, 1922, poking fun at the tendency for people to obsess over the safety of air travel while ignoring the hazards of automobiles: 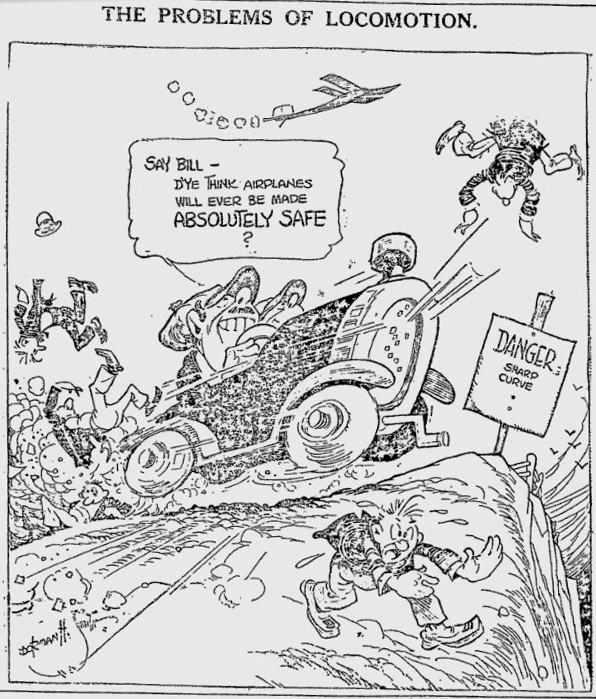 Sometimes editorial cartoons tried to predict the future. This item from Nov. 5, 1913, looked ahead to 1963 and saw a fast-paced world centered on popping pills. That's not too shabby of a prediction: 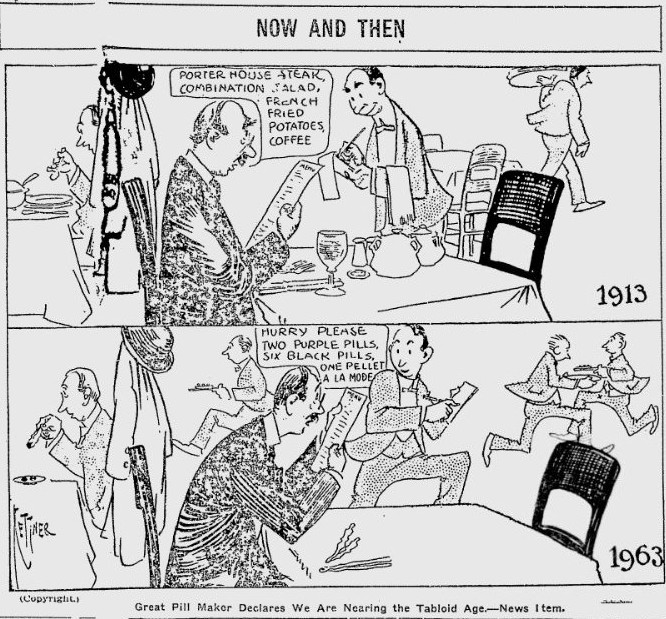 Not all of the cartoons focused on serious problems. This slice-of-life cartoon from July 12, 1922, showed how attitudes change after school lets out for the summer: 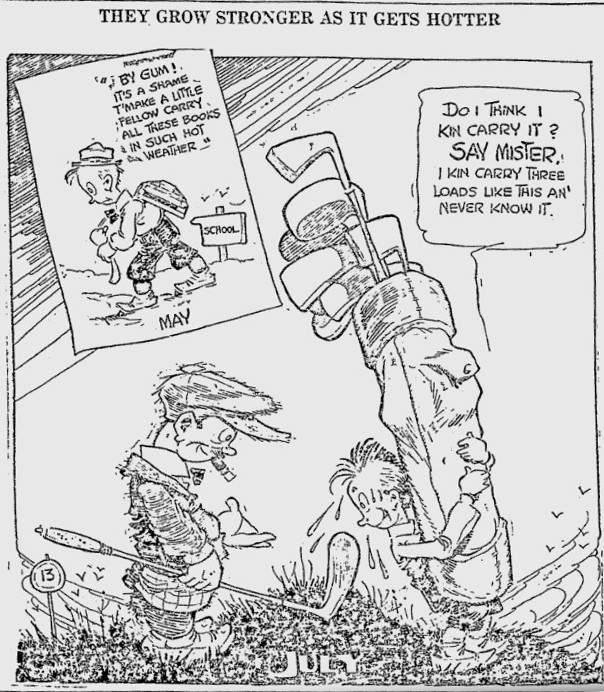 But of course summer always comes to an end. Everybody can relate to this scary illustration from Aug. 17, 1922: 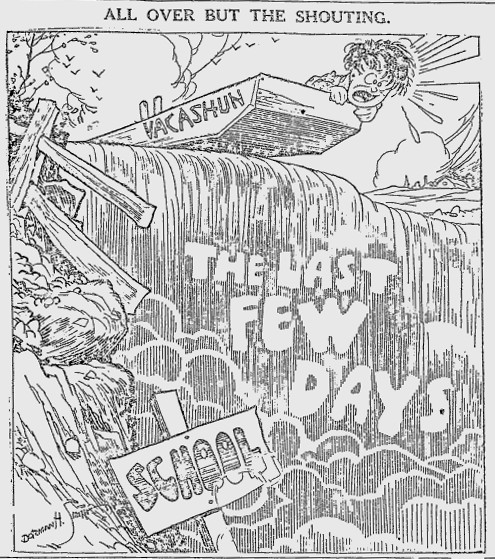 On the other hand, this panel from June 2, 1922, showed that the end of school can be scary too: 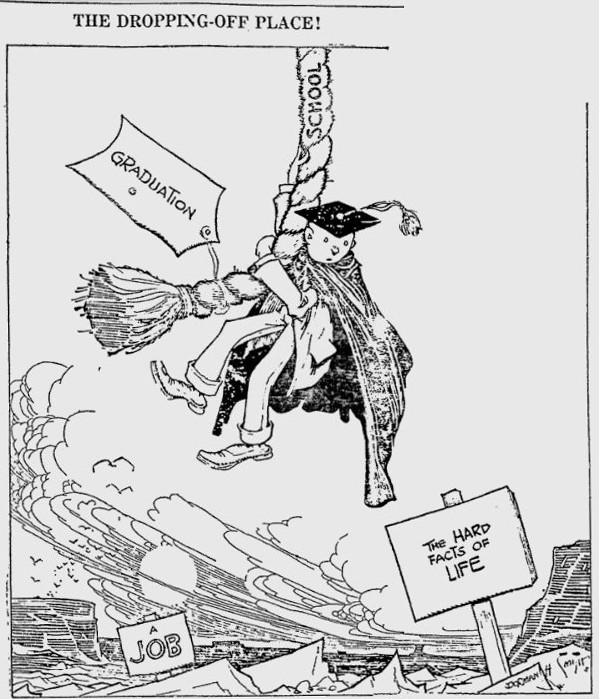 Finally, this commentary from July 8, 1922, made a poignant statement about life that resonates today: 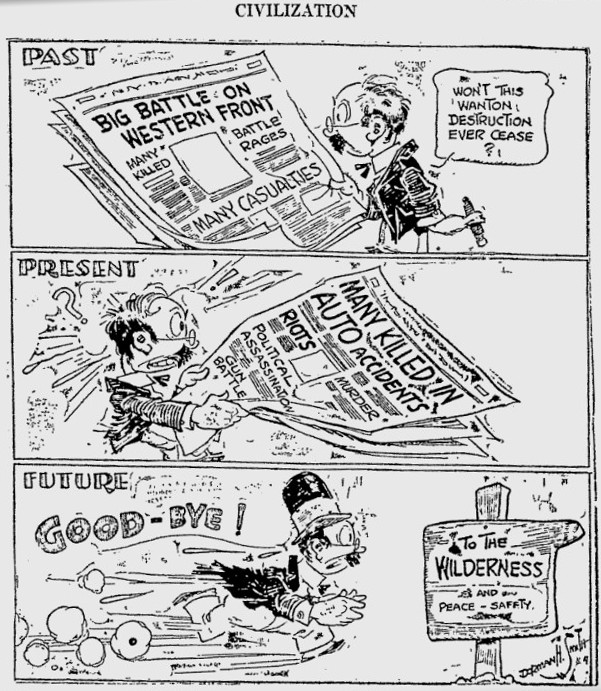