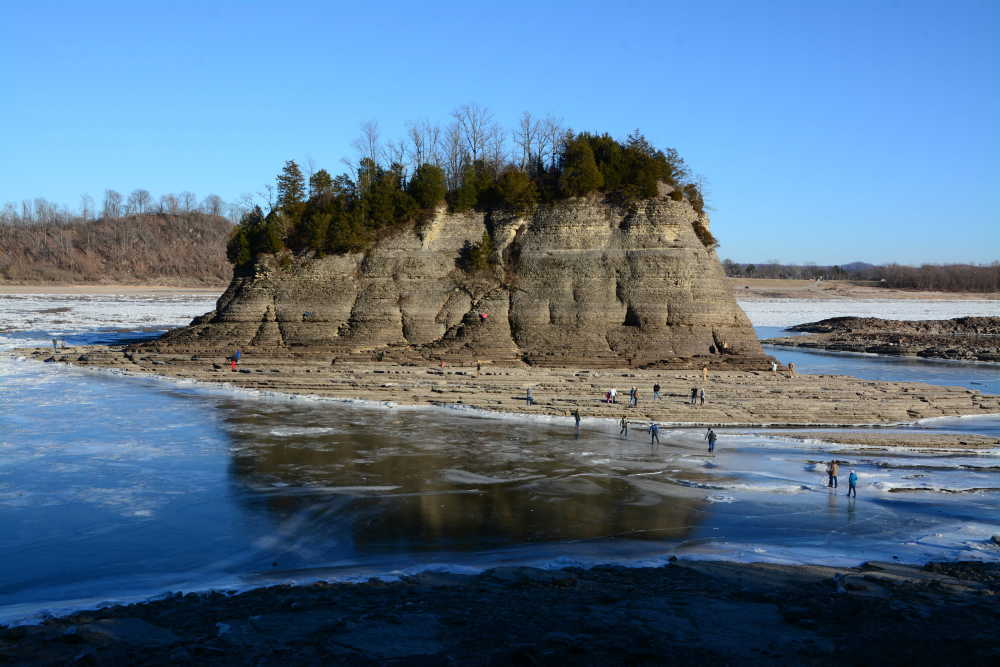 Every trip to Tower Rock is different. The changing seasons, sky conditions, sun angles, and river stages create a new scene each time.

Sometimes the water level is very high, leaving the rock as a small island in the Mississippi River surrounded by turbulent water. As the river stage drops, more of the limestone monolith is revealed, and "bathtub rings" emerge on its surface.

During droughts, the river drops low enough to create a land bridge with the Missouri shore, a rare and precious event indeed. This makes it possible to walk to Tower Rock, although the trek may require hopping across gaps in the rocks.

The key is the river stage as measured by the Chester gage: it needs to be below 1.5 feet to consider walking across. A stage of zero is even better.

I've visited Tower Rock plenty of times. Here is a photo record of ten of the more memorable trips.

The fall colors were just starting to take effect on this day, made even more vivid by the setting sun. 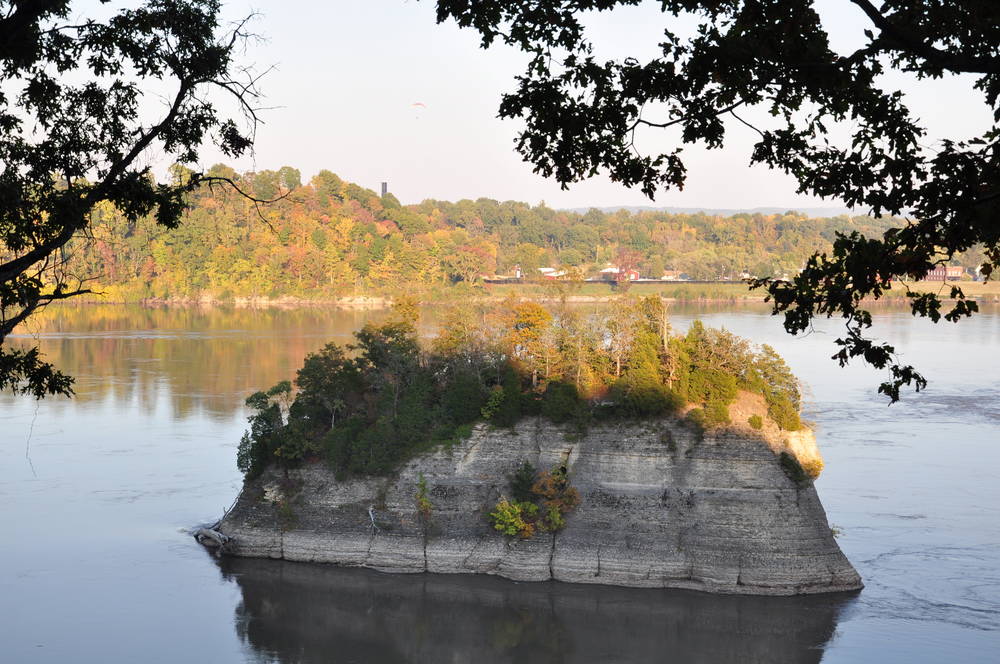 Although most people visit Tower Rock from the Missouri side, the Illinois side also offers an excellent view. The town of Grand Tower, after all, was named for the landmark. 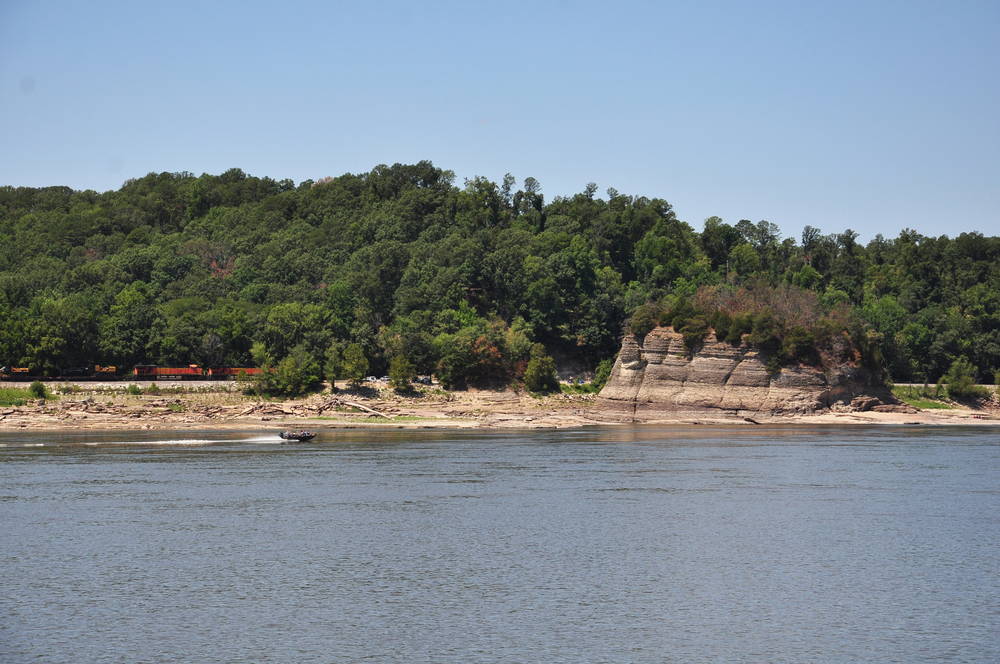 During the summer of 2012, the river dropped low enough to walk across. But it did require getting your feet wet while gingerly stepping through pools of water. 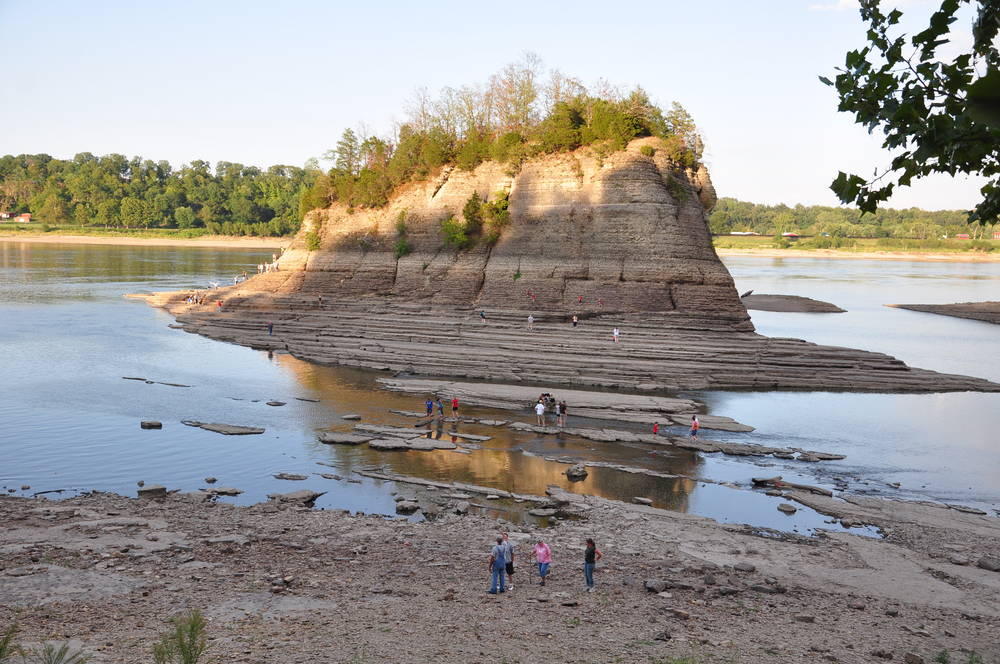 The perk of walking all the way around Tower Rock is that you can get up close and personal with the passing barges. 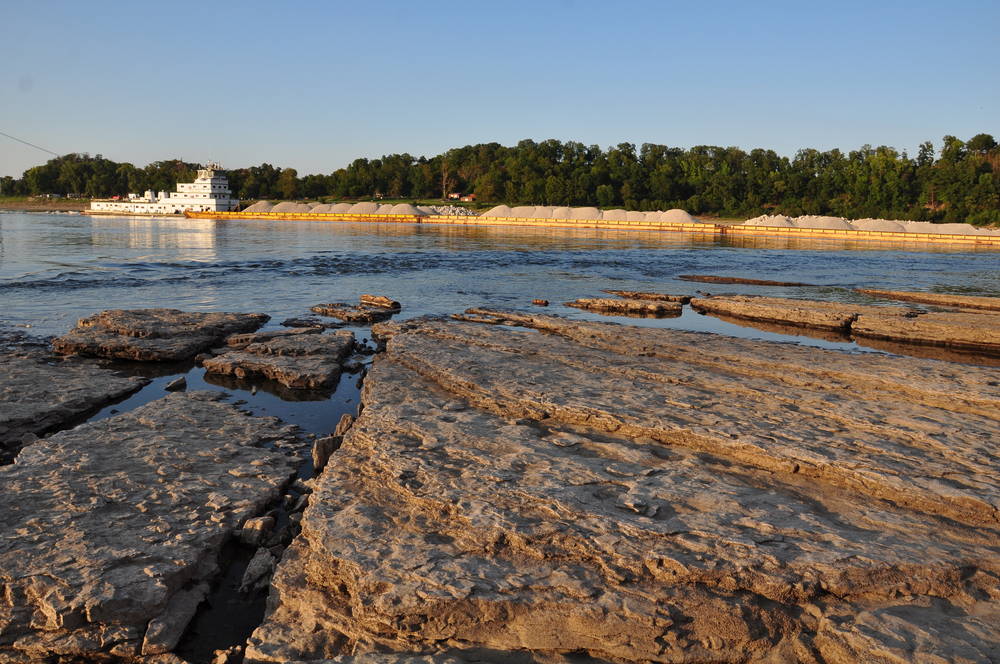 Later in the year, the river stage dropped even more thanks to an ongoing drought. 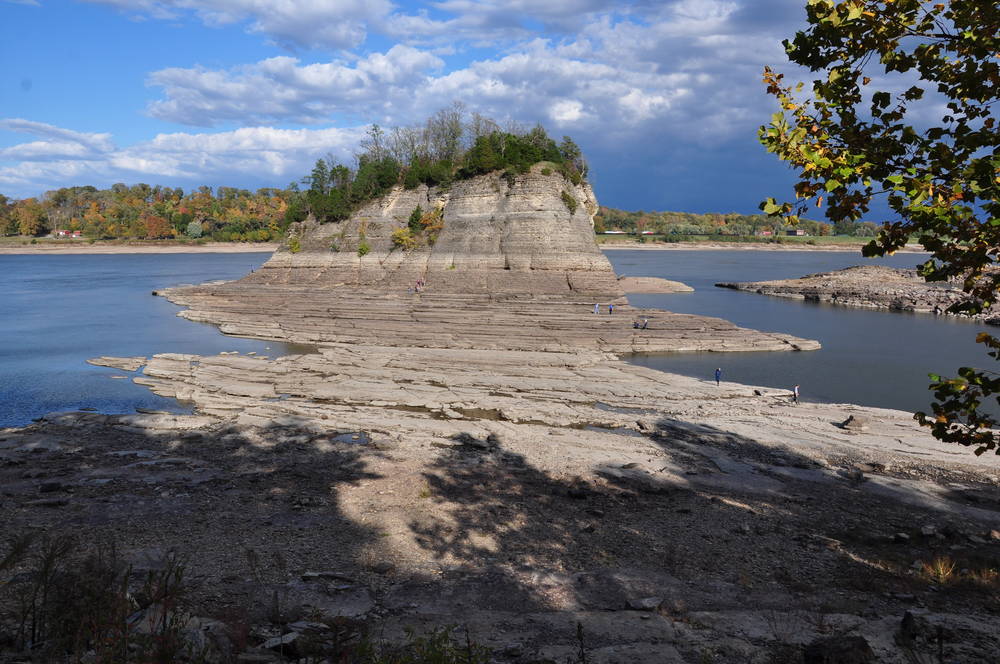 It was possible to saunter across without any risk of getting wet. 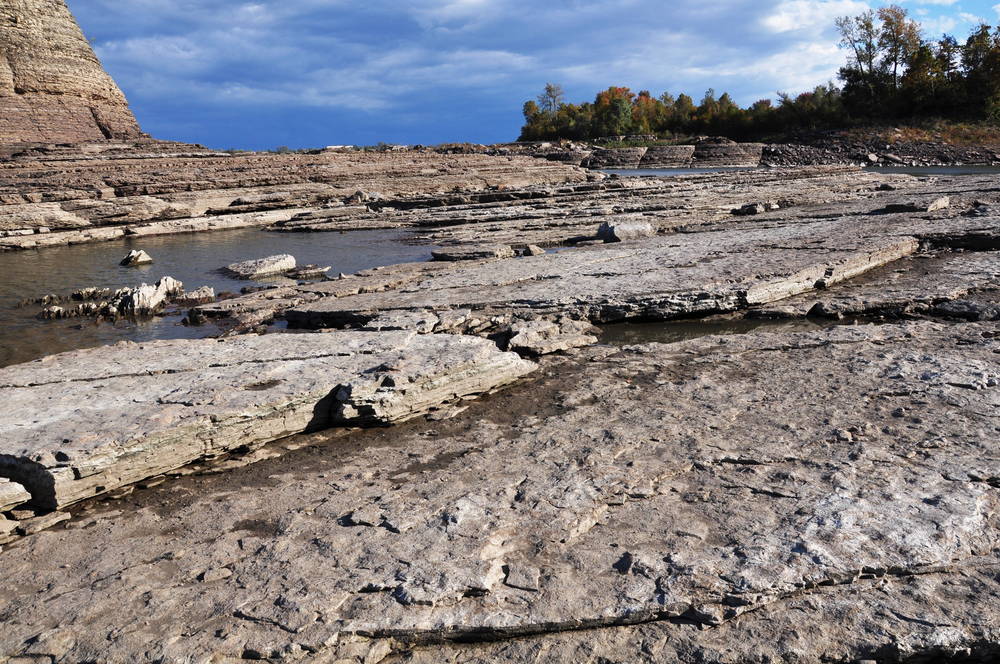 One advantage of viewing from the Illinois side is that the roads to Grand Tower are paved, unlike the access road on the Missouri side. That's an important fact during a snowstorm. 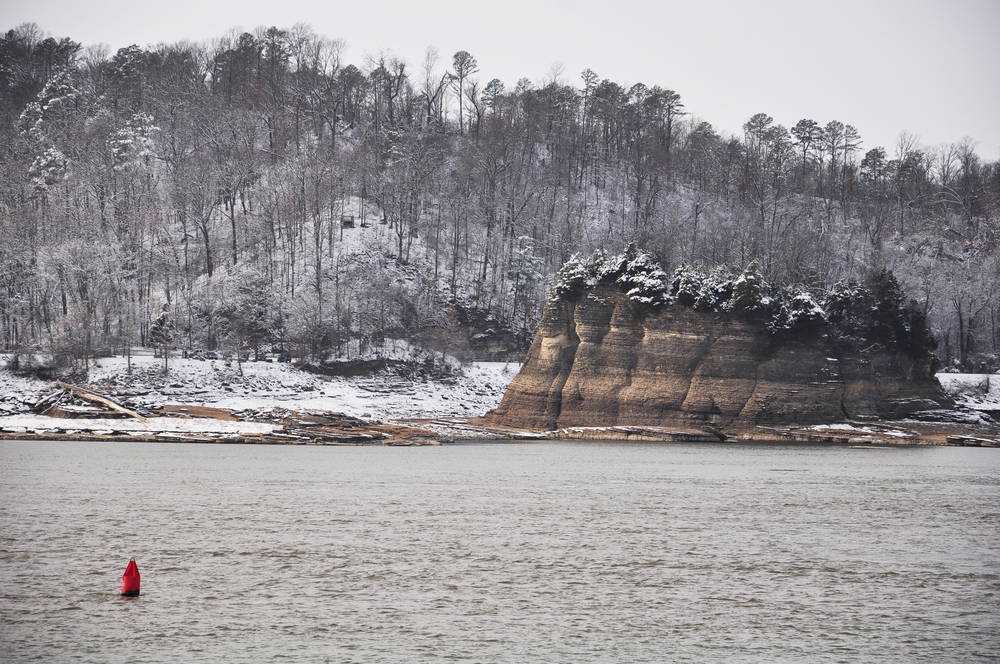 This time, the river was dropping thanks to dry weather, but it wasn't enough. The rapidly moving water, rushing toward the beginnings of an ice dam, was not to be trifled with. 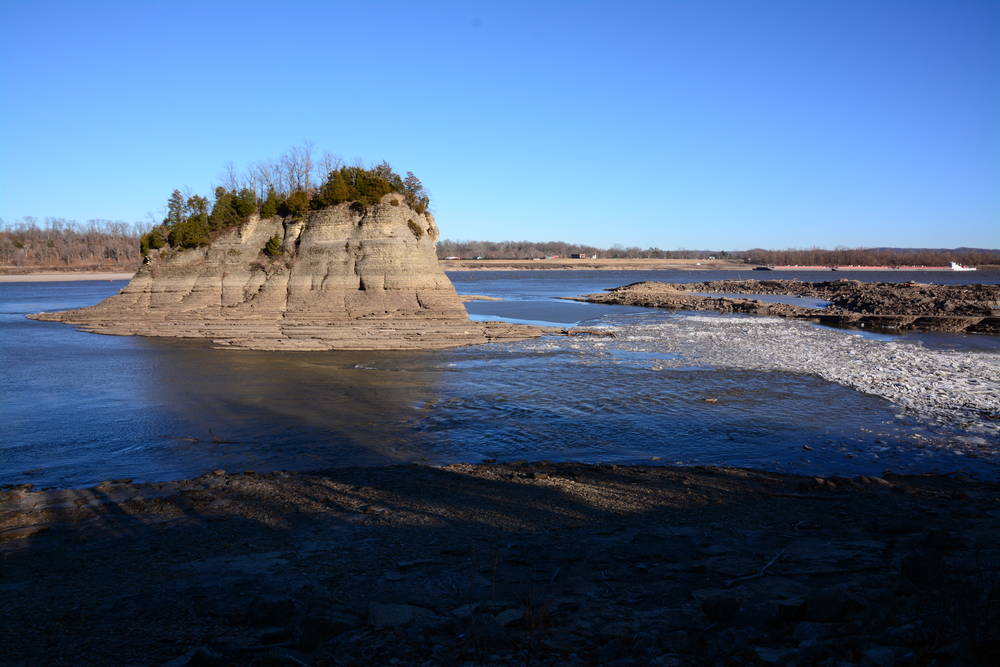 The following month, a cold snap combined with the drought to allow an ice bridge to briefly form. 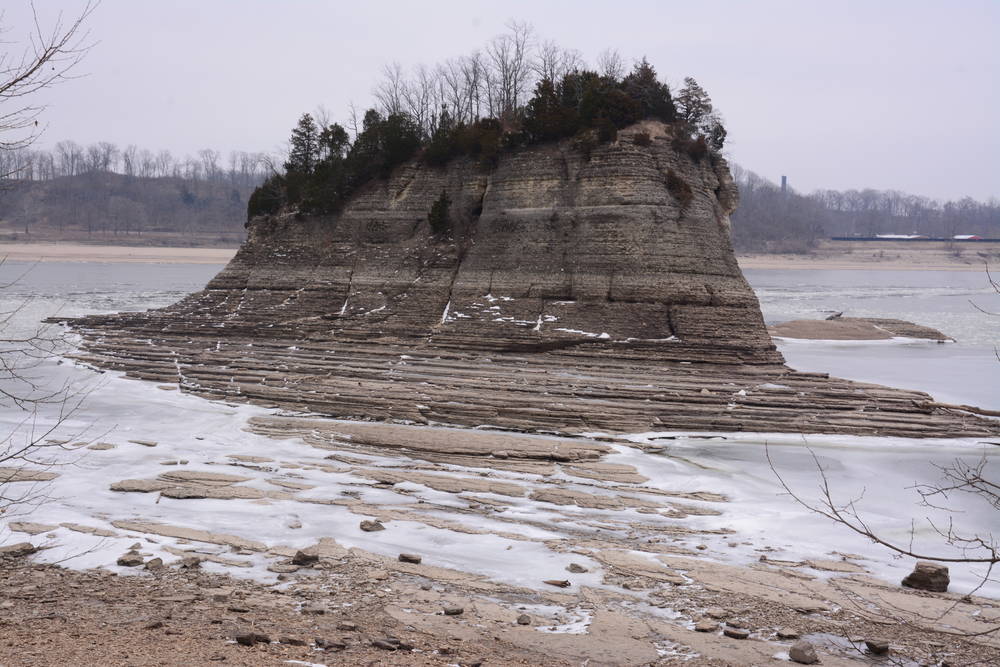 It was, however, a bit tricky traversing the slick ice. This was the last time I've been able to cross until 2018. 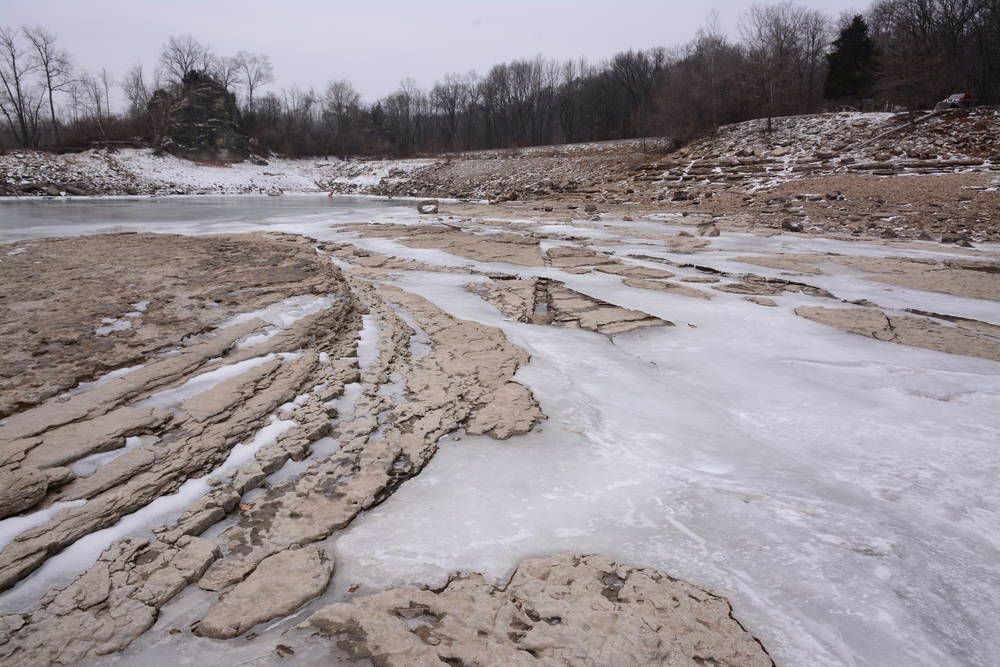 A late-season storm left some white stuff on Tower Rock. 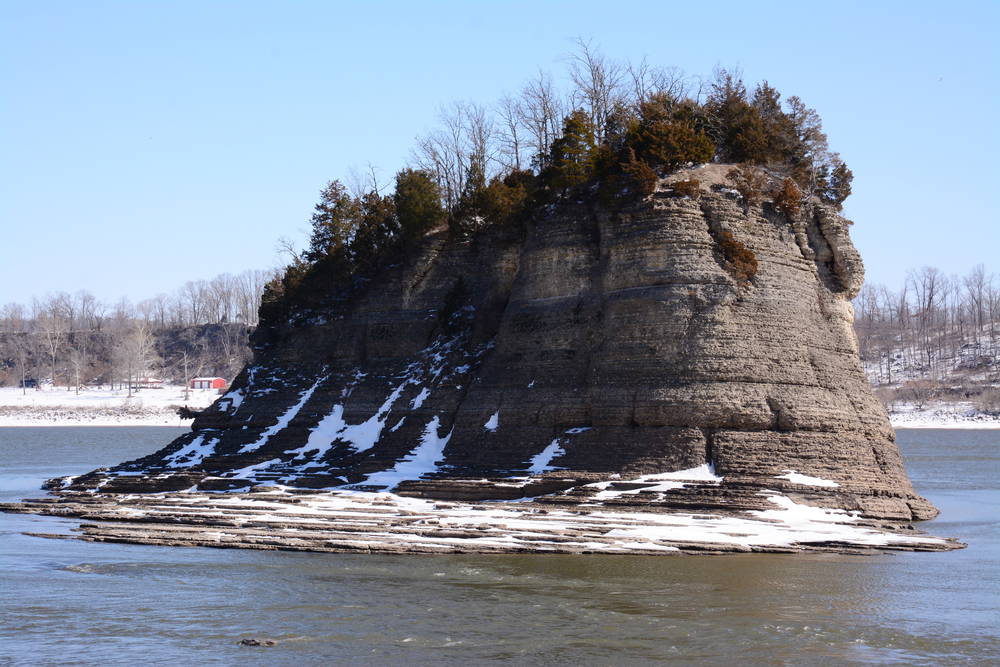 The river was fairly high on this day, leaving Tower Rock as a distant island. 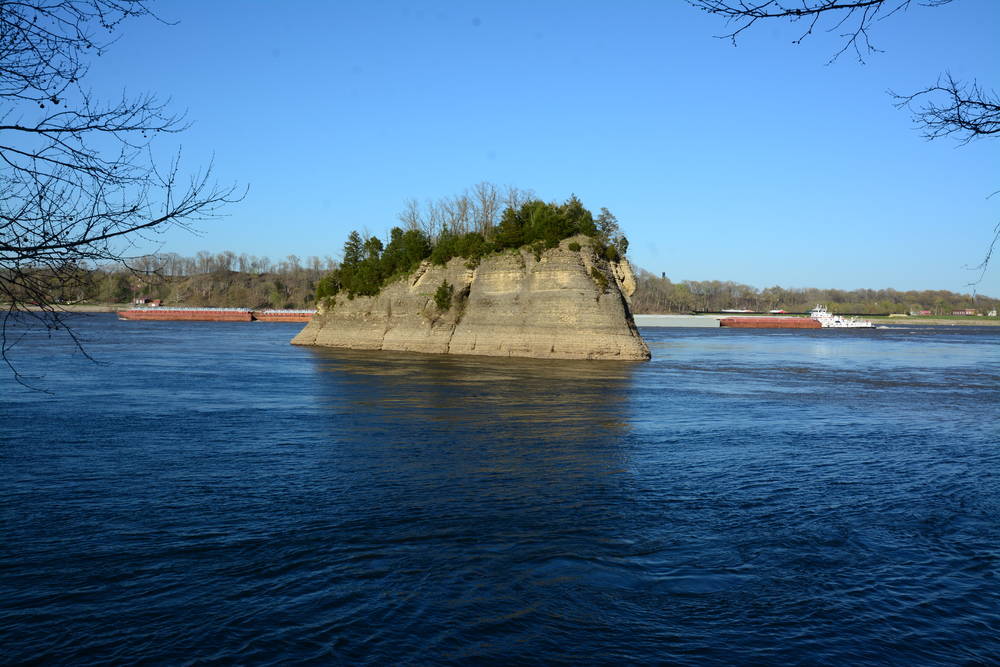 This has been the most memorable trip so far. Lasting only a few days at the tail end of an Artic blast, Tower Rock was surrounded by solid ice. 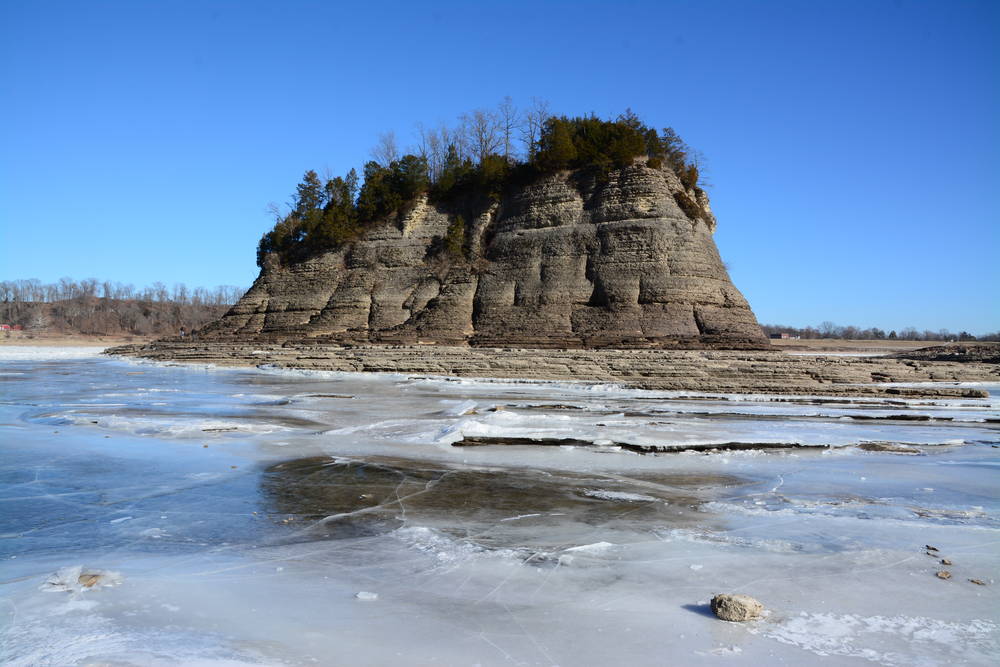 At first it didn't seem very safe to traipse across the glaze, as the ice was criss-crossed with cracks and ruptures. 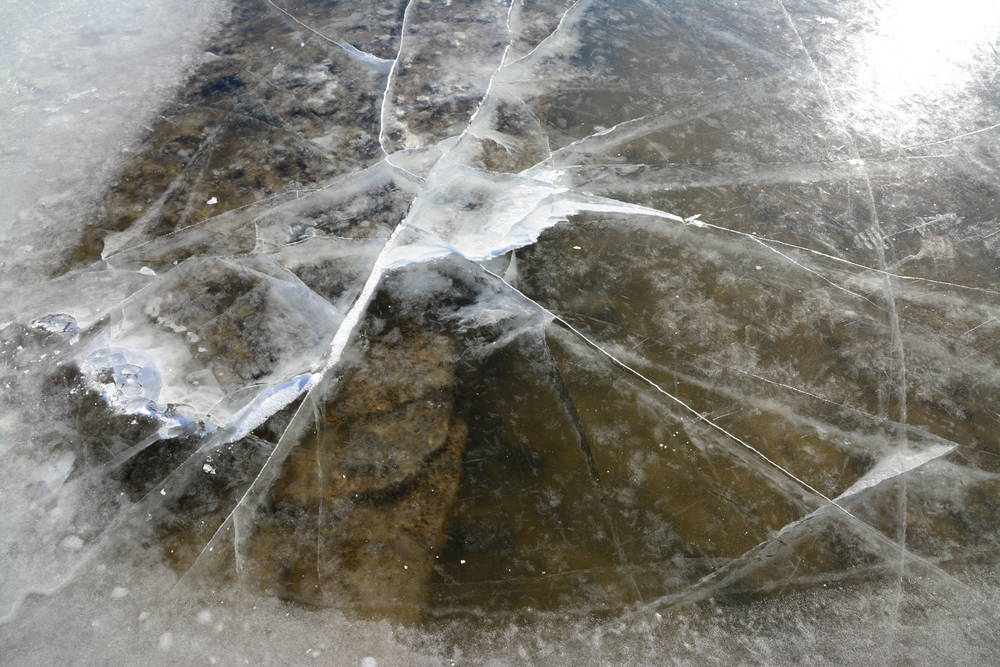 A gap in the ice revealed an ominous channel of flowing water. Falling into this would not be optimal. 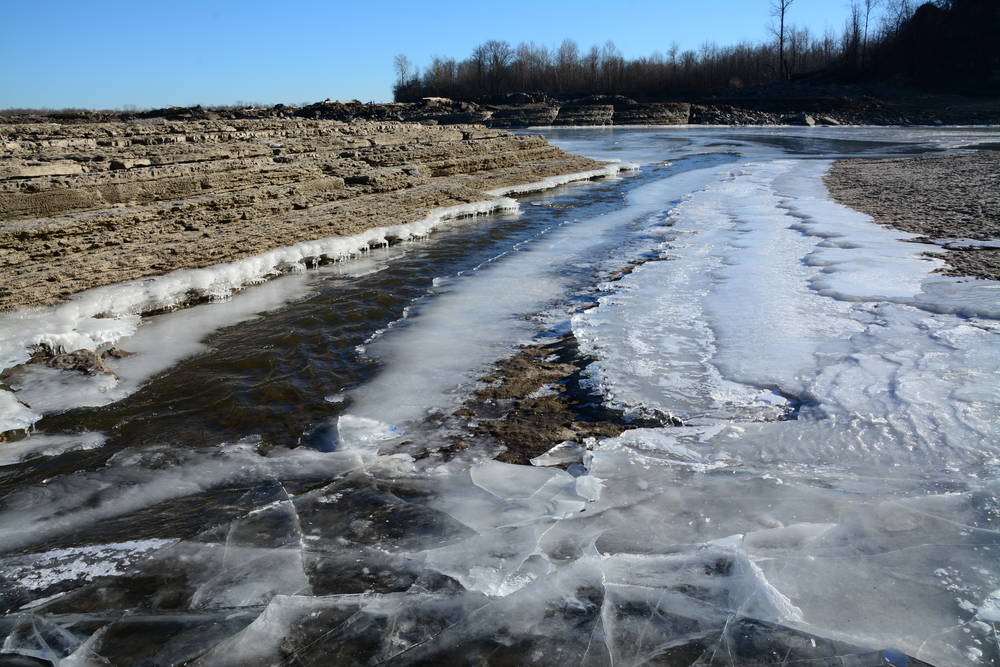 I figured, though, that I wasn't going to drive all the way to Tower Rock and not at least give it a try. Walking across the ice turned out to be surprisingly easy and relatively safe, at least on this particular day. Thanks to the rough texture, it wasn't even that slick. 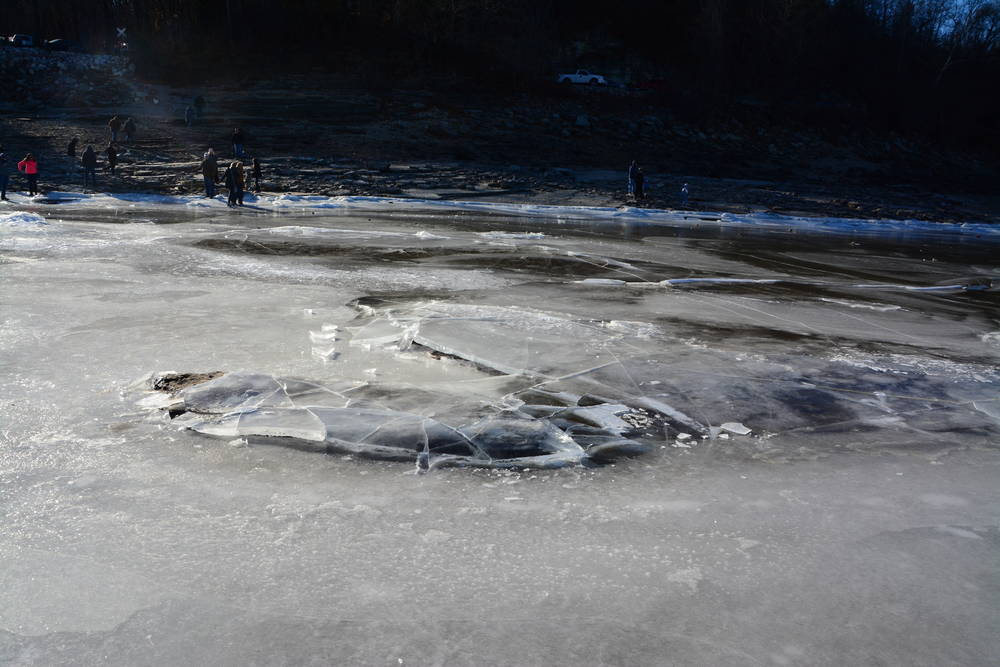 Once safely on Tower Rock, the ledges offered stunning views of the ice-choked river. 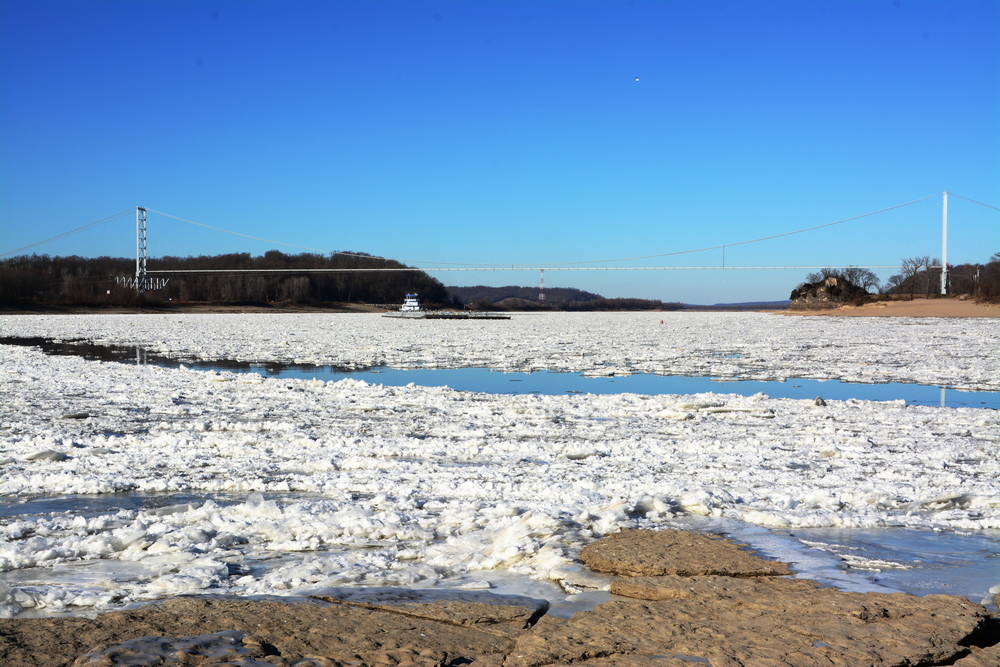 The passing towboats made a peculiar sound as they grinded through the ice chunks. It was somewhat like the roar of a distant thunderstorm or jet plane. 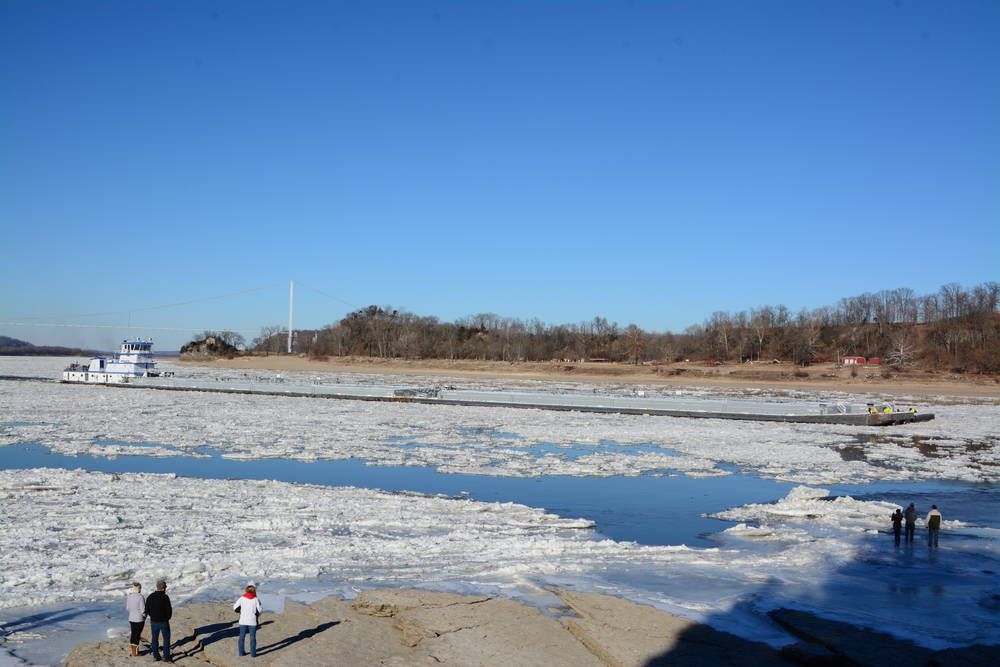 Although the river has jumped since then, keep an eye on the Chester gage for the next opportunity to explore Tower Rock on foot.

At the T-junction with Route A, turn right and follow this road through Altenburg. After leaving town, continue straight for a couple miles and turn right on Perry County Road 460. If you reach the pavement ends sign on Route A, you've gone too far.

County Road 460, a dusty gravel road, climbs up and over a steep hill, past a pipeline suspension bridge, and then across the railroad tracks. After crossing the tracks, continue to the main parking area. If there's no space available, follow the county road as it crosses the tracks again on the right and park where convenient on the side of the road in the woods.