Streetcar not desired: The rise and fall of the Cape Girardeau trolley system

Although it ceased operations 83 years ago, the Cape Girardeau street railway had an outsized influence on the city's history, one that still echoes today.

The former streetcar system has been loosely reincarnated in the form of a free downtown "trolley" -- although this modern version is more of a bus than a streetcar. It does, however, follow a vaguely similar route to the original streetcar loop, with the casino taking the place of the terminus at the shoe factory.

Meanwhile, construction work this year along Main Street has produced a pile of vintage streetcar rails. Buried for decades under the concrete and asphalt of Main Street, these old rails have emerged in relatively good condition. They tell the story of Cape Girardeau's early attempts at mass transit.

The first trolleys date back to 1893, when the newly chartered Cape Girardeau Street Railway Co. built a loop of 1.75 miles of narrow-gauge tracks. This wasn't exactly a high-tech enterprise: the cars were mule-driven. In 1898, the company, then known as the Citizens Street Railway Co., had increased its fleet to 5 cars and 12 mules.

Broadway Hill and its steep grade posed a serious problem. The mules struggled to climb the hill, but going down was even trickier. In one instance a runaway trolley crashed into a storefront near the bottom of the hill.

By the turn of the century, electricity was clearly the future. A new firm, the Cape Girardeau & Jackson Interurban Railway, was founded to take over the streetcar franchise and build a modern electric-powered trolley network. As the name suggests, the company intended to extend tram service to Jackson and possibly even Scott County, but they were beaten to the punch by Louis Houck and his ill-fated Cape Girardeau Northern Railroad. 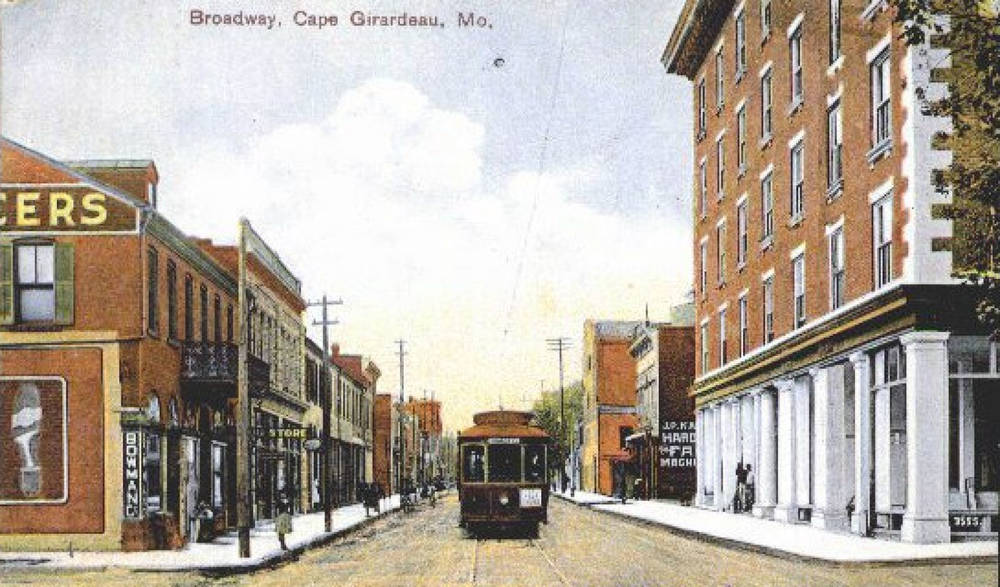 This postcard shows the streetcar passing the H&H Building on Broadway. W.H. Harrison, the second "H" in H&H, was the president of the Cape Girardeau & Jackson Interurban Railway

Trolley service was first inaugurated Dec. 27, 1905, and before long the company had built four miles of standard-gauge track to create a big loop. The route connected the city's three major commercial districts: the original downtown along the riverfront, the West Broadway commercial district leading to the college, and the Haarig neighborhood centered on Good Hope Street. Streetcars also provided commuter access to the major employers of the era: the International Shoe Factory on North Main, the State Teachers College, and the Frisco Railroad facilities on the south side of town.

This map shows the route of the electric streetcar system. The branch line along Frederick Street to the Frisco railyard was short lived and the exact route is unclear.

The Street Railway Journal in 1906 described the technical details of the new Cape trolley cars. With a seating capacity of 30 passengers, the cars were propelled by two 30-horsepower motors.

After going into minute detail on the dimensions of the trolley cars, the article explained some of the decorative features. The cars were "finished in cherry with ceilings of three-ply birch veneer" and had incandescent lights with bulbs of "frosted glass."

In a special report, the U.S. Bureau of the Census published exhaustive tables on the street railways operating throughout the country. From this report, it's possible to glean some tidbits on the Cape Girardeau & Jackson Interurban Railway for the year 1907:

* The system had 7 trolley cars

* The rails weighed 56 pounds per yard

In 1914, the Cape Weekly Tribune published a story explaining how an electric streetcar works. After providing a primer on electricity, the story stated:

Each trolley car is provided with a trolley pole and a trolley wheel at the end of the pole which runs along the under side of the trolley wire. The electrical power from the trolley wire flows through this wheel and down the trolley pole to a heavily insulated cable concealed in the top of the car. This cable carries the electricity to the "controller" in the front of the car. The controller is the iron box which stands in front of the motorman. At the top of this box are two levers. The smallest lever is used to turn on and off the current supply and the larger is used to control the current, or to "feed" it to the motors beneath the car in any quantity as desired. When the motorman turns the controller handle a few notches a certain amount of electricity is allowed to flow from the overhead trolley wire down the pole, through the cable and control box, to the motors beneath the car. The car starts and the motorman turns the controller handle further, feeding the motors more current, and the car picks up to its regular running speed.

The electrical current flows to the car over the trolley wire. After it flows through the car, via the cables, through the controller, the resistance and the motors, it flows out of the car through the iron wheels and back to the power house along the steel rails, thus completing the circuit.

This technology can still be seen today. Some of the salvaged tracks have dangling bundles of wires that connected each segment, allowing the current to flow back to the powerhouse on North Main Street. 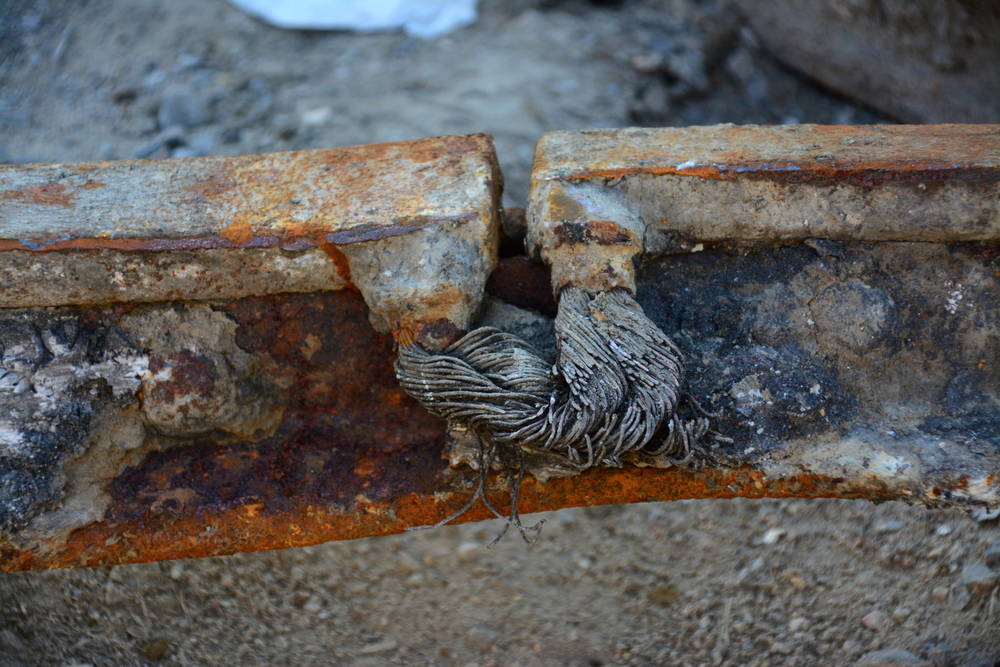 Despite the electric power that far exceeded anything that mules could produce, the trolleys still struggled with Broadway Hill and its 7 percent grade. In a 1912 article, general manager Samuel Barnes explained, "When going down this grade, if the car gets beyond the motorman's control, it is necessary for the motorman to throw off the overhead switch and reverse the controller seven of nine points to allow the motors to generate sufficient current to hold the car to a controlling point of speed."

In the same article, Barnes boasted that his company was one of the first to switch to "one-man pay-as-you-enter" cars. Instead of having a separate conductor to collect fares, the motorman would collect the money as passengers first embarked. According to Barnes, the transition to one-man operation went mostly smoothly, and the streetcars were able to maintain a scheduled speed of 9˝ miles per hour.

The streetcars continued to plod along until disaster struck in January 1913. A major fire consumed the power house and car sheds, destroying many of the cars. Immediately after, the Cape Girardeau Waterworks & Electric Light Co. agreed to step in and operate the streetcars on an emergency basis using its own power plant. The utility company also agreed to buy out the streetcar company stockholders.

It's perplexing why the utility company wanted to purchase the streetcars since the system had never turned a profit. Perhaps they were using the purchase to curry favor with the city council to renew their soon-to-expire franchise for providing utility services. Indeed, after the franchise was secured, the utility company tried to back out of the contract on a technicality. After years of legal wrangling, the Missouri Supreme Court upheld the agreement, and the utility company was left to operate a trolley line that continued to be unprofitable.

By the late 1910s, the rising popularity of automobiles prompted lower ridership numbers and increasing conflicts between drivers and trolleys. An editorial in the Weekly Tribune from 1918 advocated for greater enforcement of traffic laws. "Automobile drivers are not suppose to pass a street car when passengers are getting off or on, but it is unusual when an automobile man complies with this regulation," the editorial observed. "It is exceedingly dangerous to pass street cars at high speed when people are attempting to board them or alighting. This is one feature of the law that should be strictly enforced."

To better compete with the popularity of automobiles, in 1921 the utility company (then known as the Missouri Public Utilities Co.) invested in rebuilding the system and purchasing three new modern cars capable of seating 36 passengers each. These new trolleys were "electrically heated and air-controlled." In return for these improvements, the city authorized an increase in the fare to 7 cents instead of 5 cents.

Advertisements in the Southeast Missourian from July 1922 pitched the new Park Place residential subdivision which was "convenient to car line." An accompanying map showed the streetcar rails snaking around the development on Henderson, Normal, and West End Boulevard. 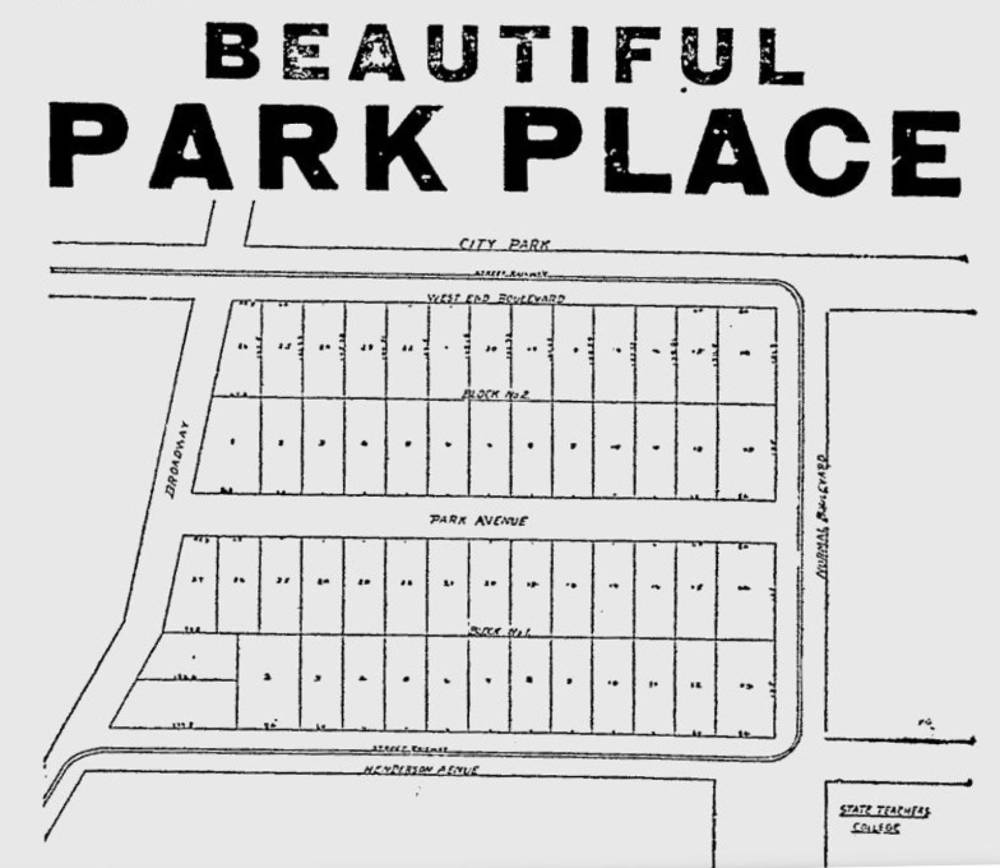 However, July 1922 also saw several mysterious notices in the newspaper questioning the streetcar system. Although the new trolley cars allowed the system to run more miles, passenger totals were down. The beginning of the end was in sight. 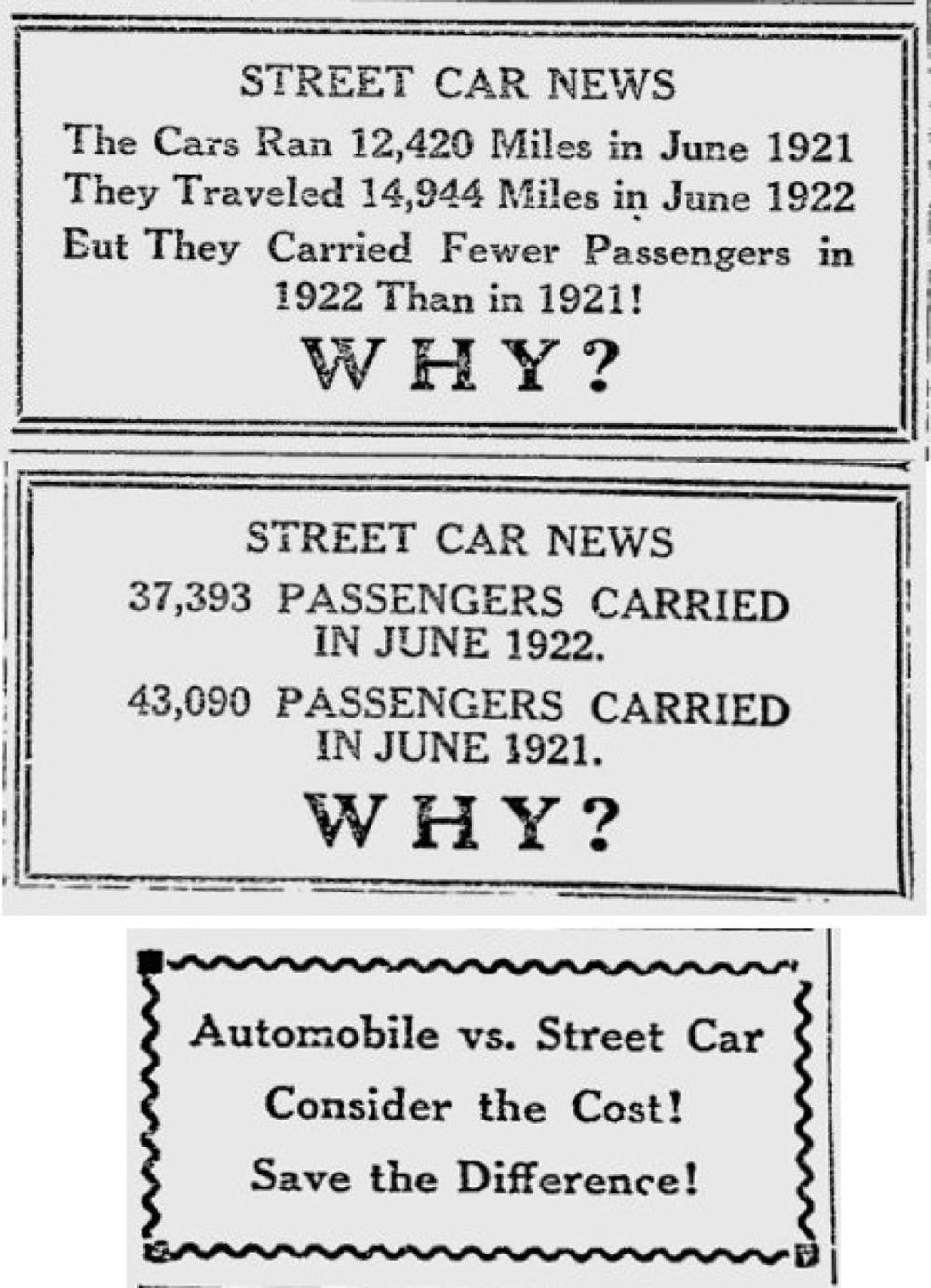 Streetcars continued to run through the 1920s -- still without making any profits -- but the Great Depression was the final straw. In 1934, a petition signed by 1,500 residents was presented to remove the streetcars. The city council and utility company agreed, and a formal request was sent to the state Public Service Commission for authorization to abandon and dismantle the system. The value of the street railway had been appraised at $150,000, an amount that the utility company would have to write off. But the company was eager to be rid of the albatross. Meanwhile, the city council wanted the trolleys gone since they "constituted a menace to traffic."

The state commission soon granted permission, and trolley service ended at 9:30 p.m. on August 10, 1934. The Southeast Missourian reported that work would begin immediately to take down the electric wires and poles, remove the switches and "frogs", and repair the pavement where the rails protruded above the street. The tracks running down the medians of Normal Avenue and West End Boulevard were to be removed and the spaces turned into "ornamental parkways." The utility company would try to sell the trolley cars -- or dismantle them if no buyers could be found.

Most of the rails were allowed to remain, becoming embedded in the pavement. During the scrap drives of World War II, the government did haul off 1˝ car loads of salvaged rails, but that was only a portion of what remained.

Even though the streetcars had lost their popularity in the final years, not everyone was happy to see them go. On the second anniversary of the end of service, the Southeast Missourian published this poignant poem from one Joe L. Moore:

And the murmuring voice of the river,

The honks of the autos, the rumblings of trains,

But her street cars are silenced forever.

The chug of the steamboat is hushed on the way,

A mania for speed has its grip on the race,

Unwilling to heed any warning.

In the years yet to come many works man has done,

Remember in song and in story,

Will smoulder and rust and pass into dust,

While the river rolls on in its glory.

There is many a man at the end of life's span,

Who failed to do what he'd intended;

While the sun shines make hay;

Your rumbling at last will be ended.