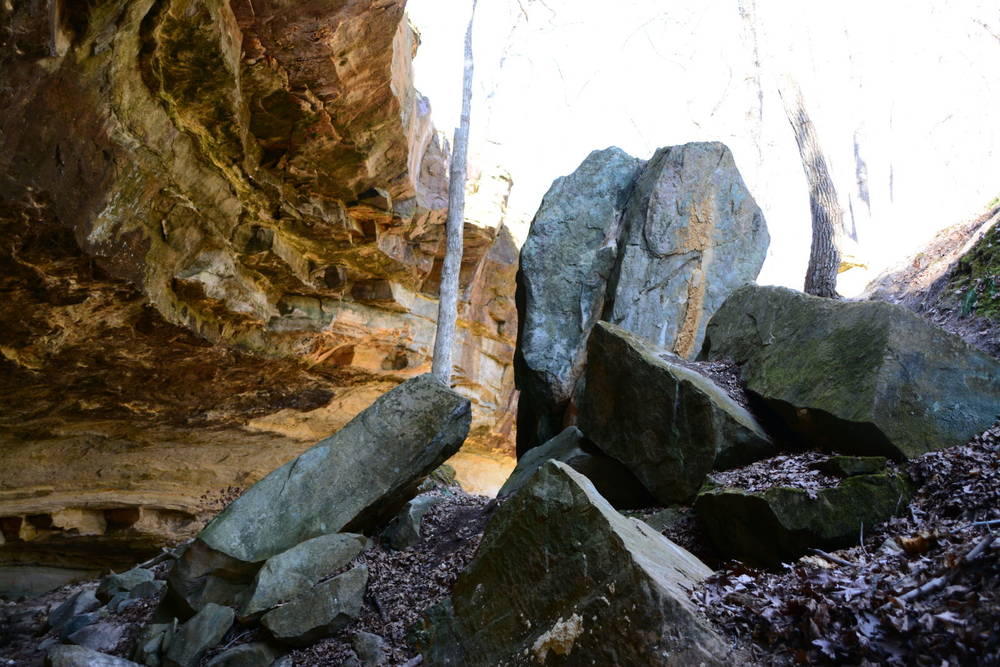 In January, at around the same time that Nixon's boondoggle was announced, the Department of Natural Resources also announced the opening of another new park, Don Robinson State Park. This park sits at the other end of the spectrum: it's very accessible, featuring an entrance drive with a roundabout and divided highway, and a paved wheelchair accessible trail. 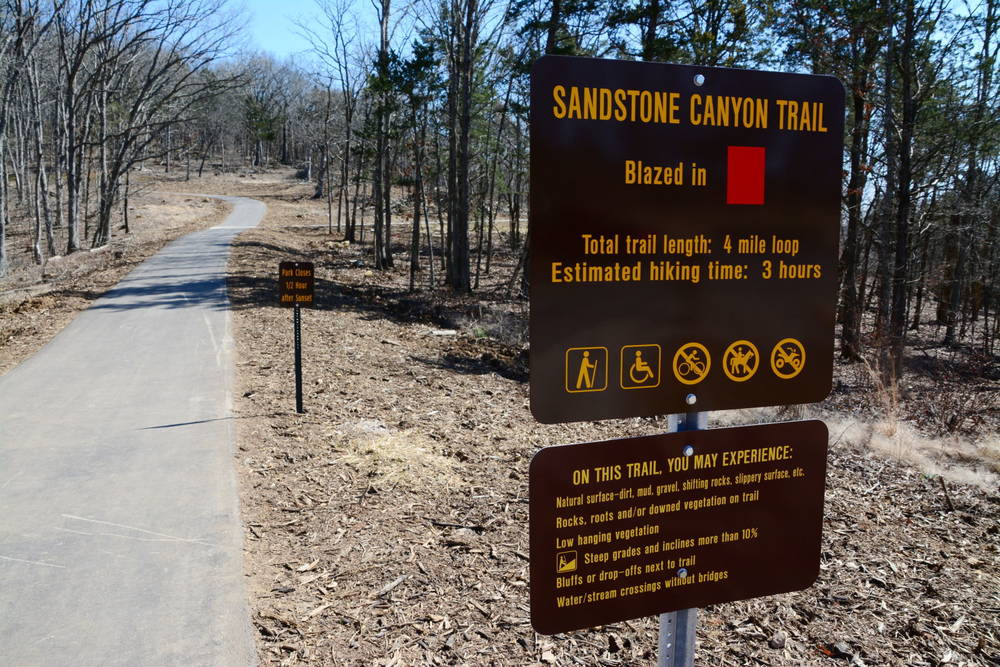 This park has generated far less controversy. Legislators aren't clamoring to change the name. It was, after all, entirely appropriate to name the park after the man who donated the land to make it possible. Don Robinson even left some seed money to help develop the park when he died in 2012. 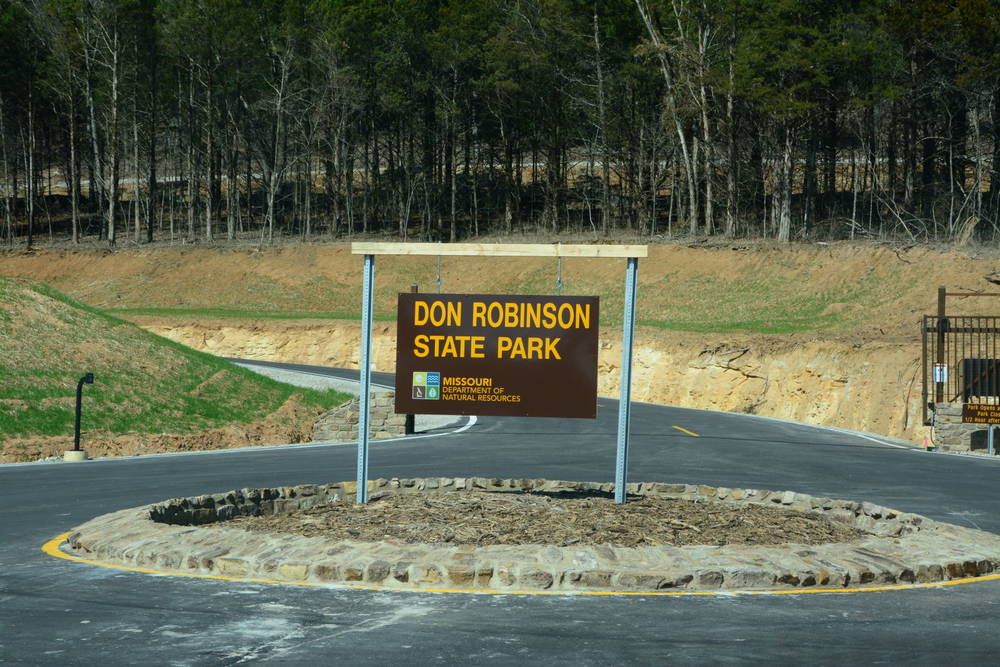 Robinson was quite the colorful character. An inventor and entrepreneur, he was best known for his "Off" stain remover which he plugged in late-night commercials.

In 1964, he started purchasing land in the boondocks of Jefferson County, eventually amassing 843 acres of very rugged terrain. This number was important to him, since 843 acres is also the exact size of Central Park in New York City. 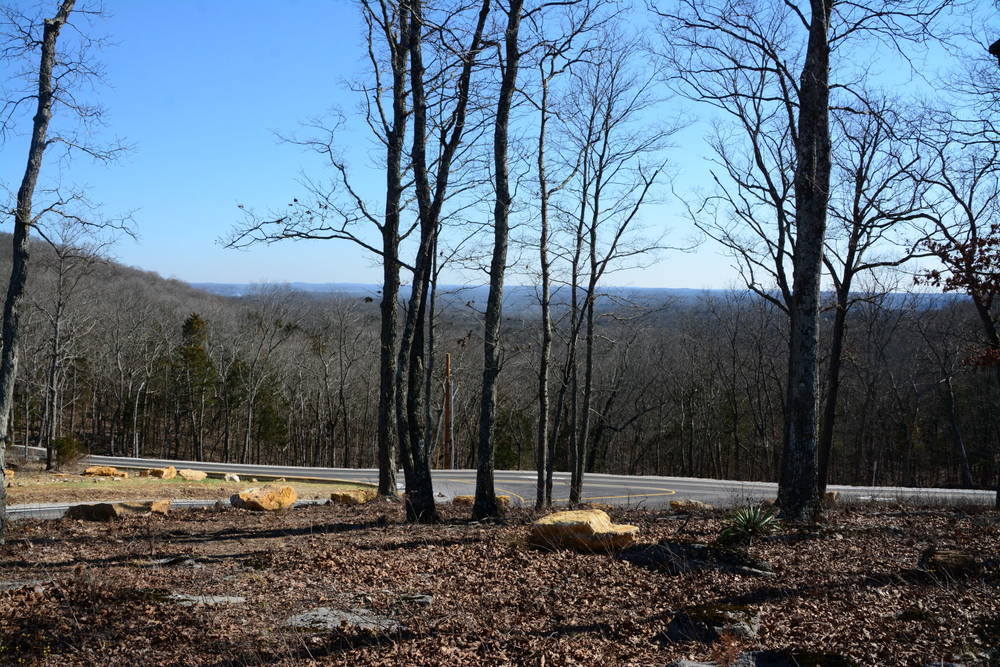 Jefferson County isn't quite as densely populated as New York, but the rapidly growing sprawl around St. Louis meant that his land was no longer in the boondocks. He didn't want to see his land turned into yet another housing development. But since he didn't have any children to carry out his plans, he decided his best option was to leave the land to the state when he died. 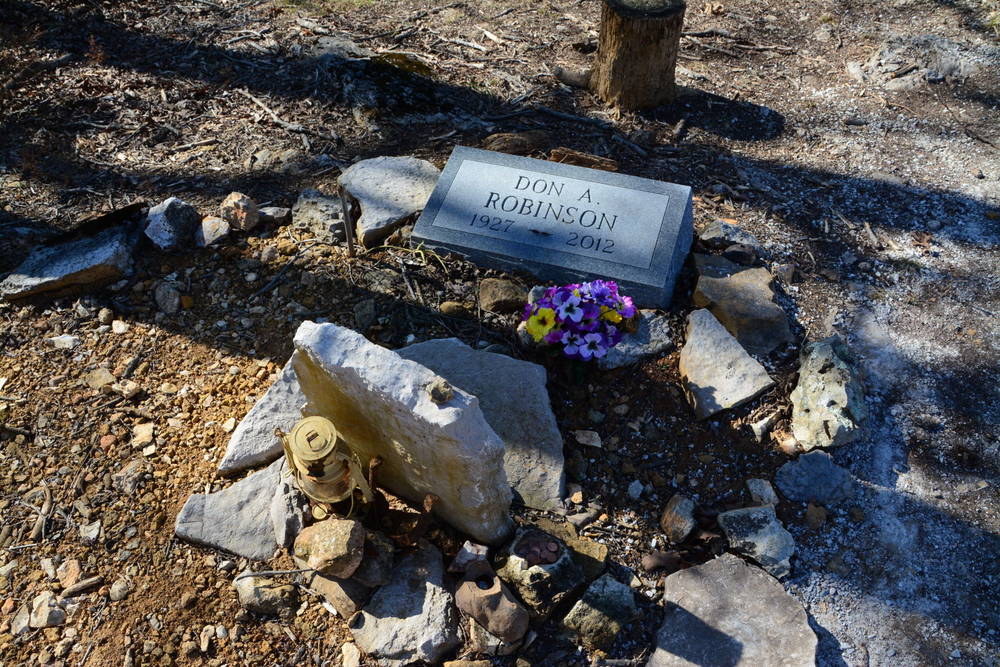 In a TV interview he explained, "I had to do something about it or else my melon-head cousins from out of nowhere would come out of the woodwork and sell the joint over a weekend or something."

His joint includes some excellent scenery as well as one very strange house. Starting with a 1920s-era stone cottage, the house had been expanded over the years using a variety of salvaged materials. 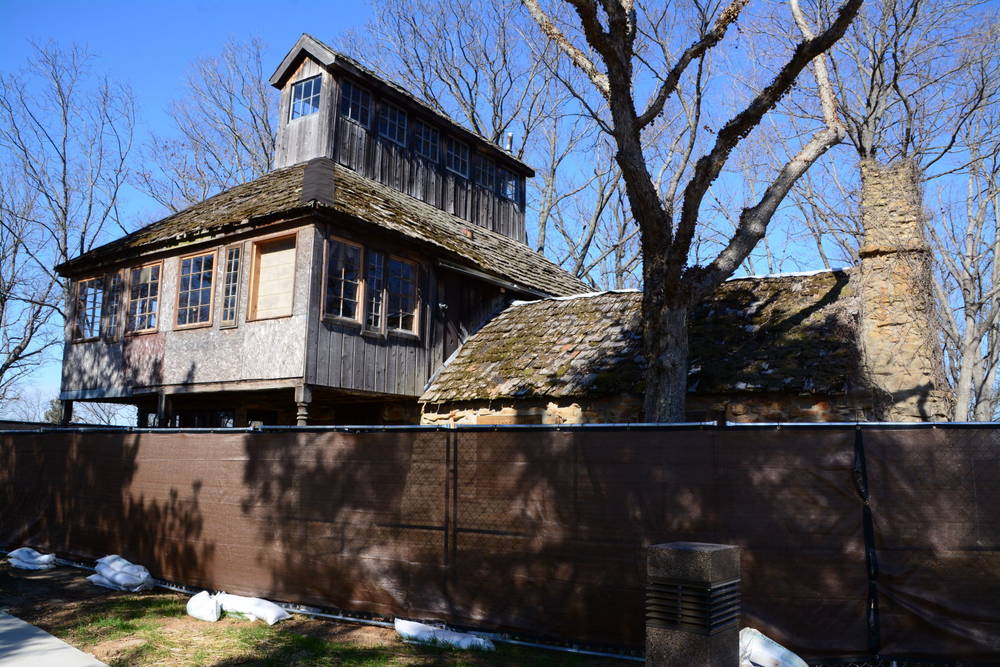 It was not exactly luxurious living, as most of the house was not heated. But the property did have a swimming pool with a spectacular view of the surrounding valleys. Robinson's yard featured various architectural follies in various stages of incompletion, including concrete-arched walls near the pool.

The house still remains (although currently fenced off). But the pool, wall, and various other structures have been demolished for safety and to make room for the new park's facilities. The site of the pool is now a patio with a picnic shelter and rocking chairs. 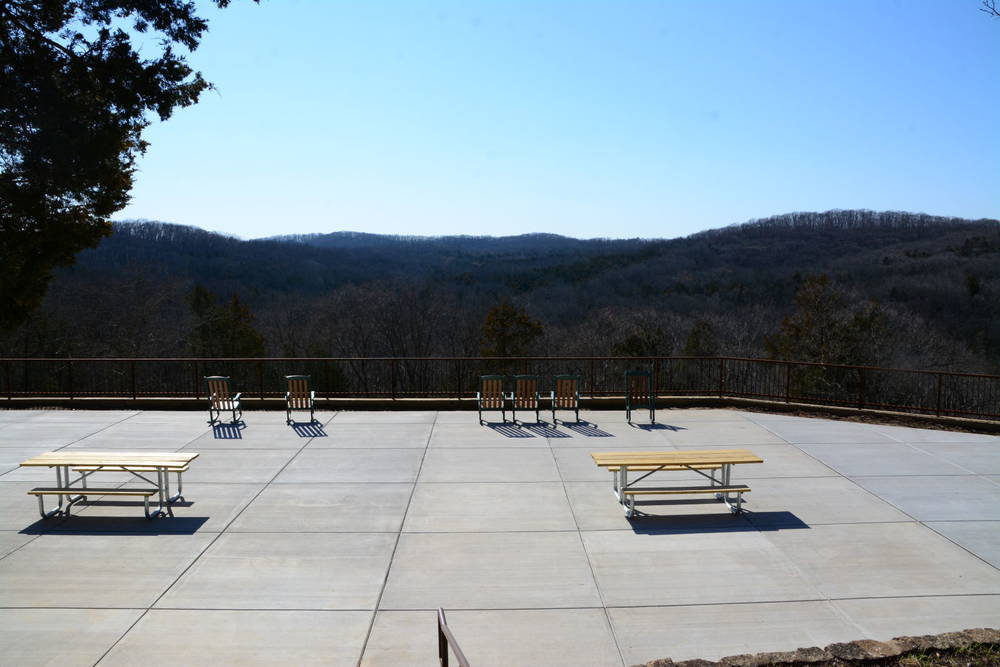 Photos and videos from during Robinson's lifetime depicted a rustic setting with a rough gravel driveway winding up to the house while passing various hand-painted signs and curiosities. Today's state park, with its blacktop entrance road, elaborate parking lot, and paved walkways, has obliterated a lot of the quirkiness from Don Robinson's joint.

And yet the most important feature of the land remains: a sandstone canyon that twists around at improbable angles and offers surprises at every turn. 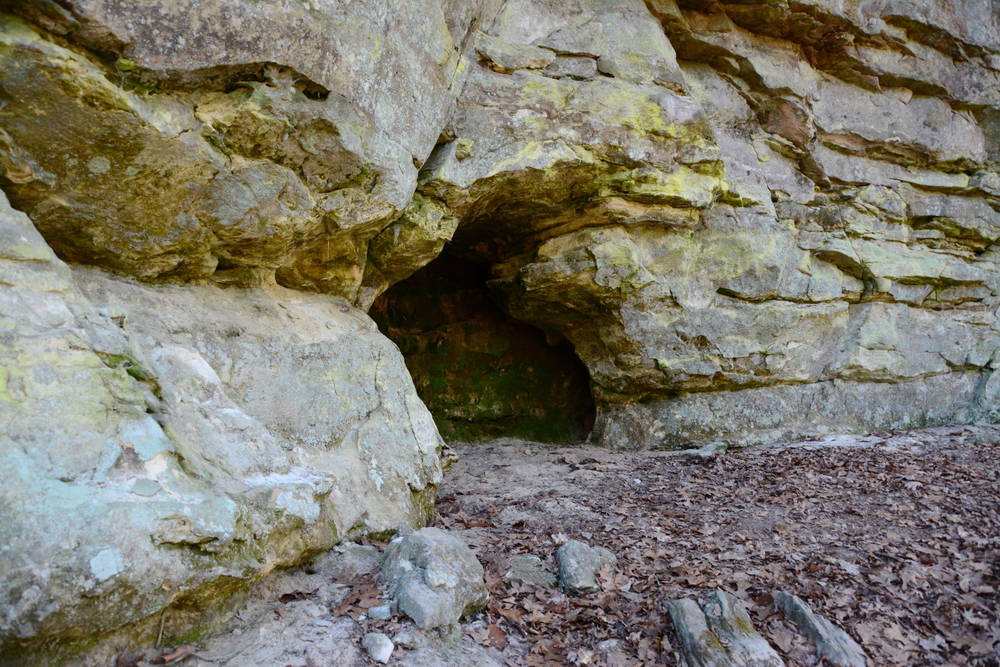 The Sandstone Canyon Trail, the park's only trail that is currently open, starts as a paved wheelchair-friendly thoroughfare. After passing a shelter in the woods, the trail turns to gravel and heads down into the canyon. 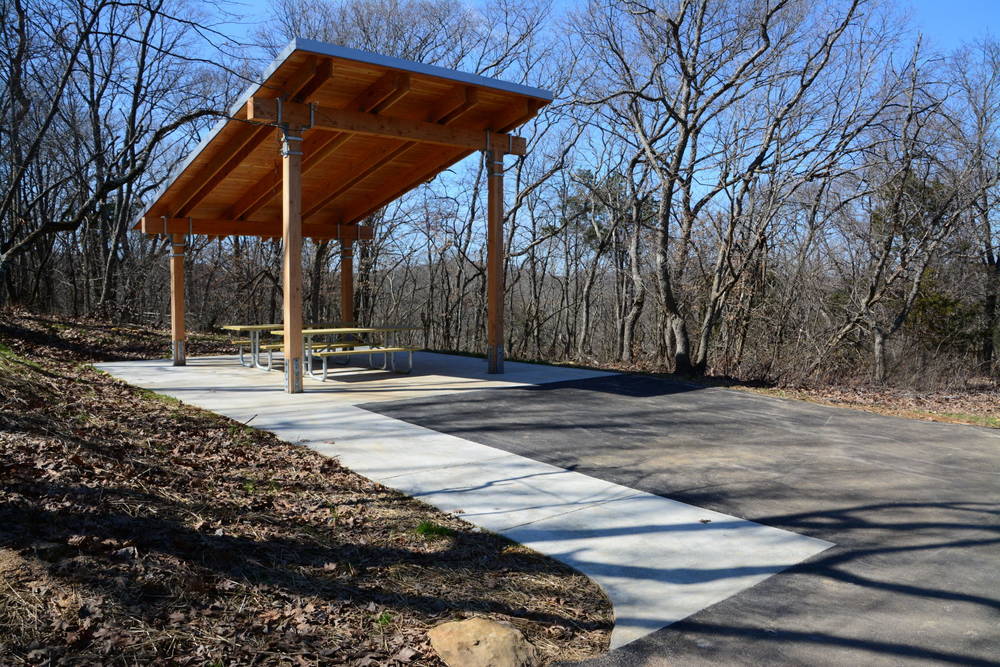 Soon the trail reaches the ruins of an old concrete dam. It appears that this attempt to dam the canyon was wildly unsuccessful, as large slabs of the dam structure have fallen into the creek, leaving only one segment intact next to a sandstone bluff. 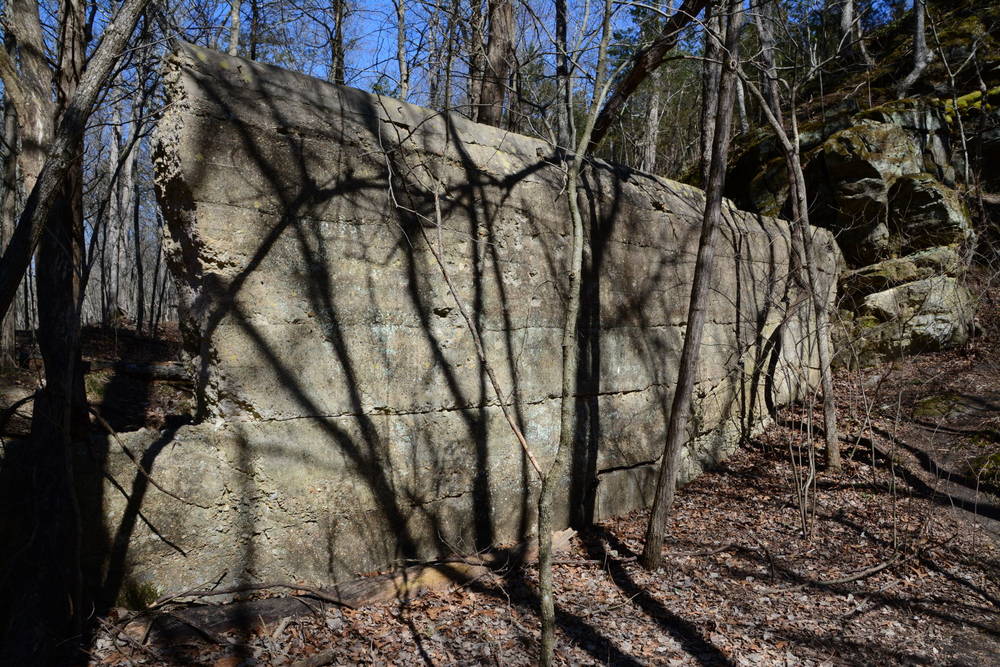 The state park boundary lies just north of the dam, but hikers could continue into the adjacent LaBarque Creek Conservation Area.

From the dam, the main trail turns southward and then climbs up the hillside overlooking the canyon. At least, that's the route of the official trail. I imagine many hikers will instead choose to hike through the canyon proper since the view from inside the canyon is more interesting than from above.

A side canyon to the east leads through a narrow ravine and ends abruptly at a wet-weather waterfall and plunge pool. 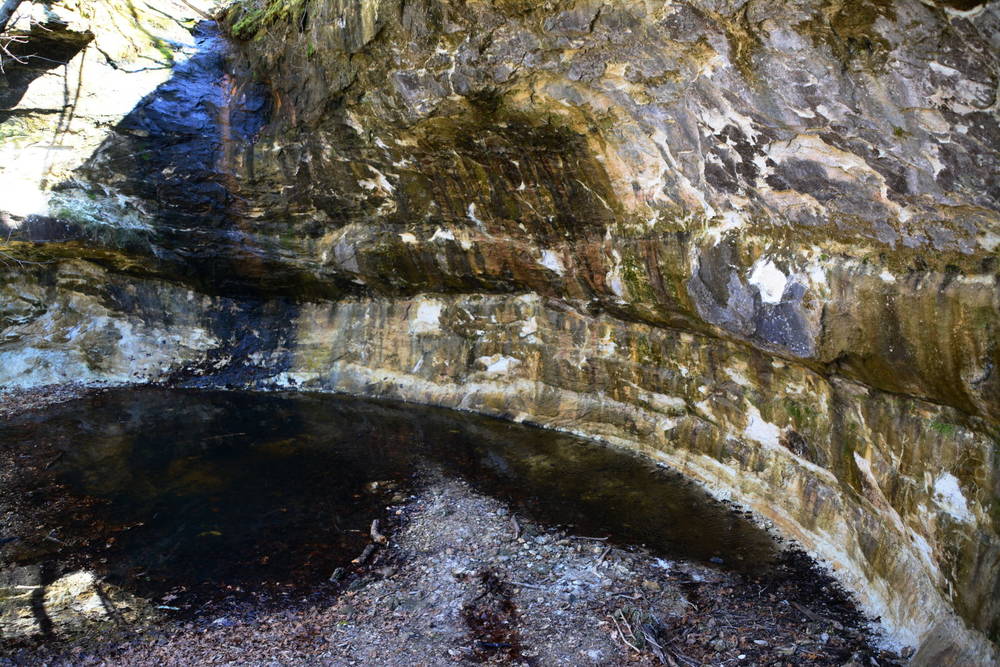 The main canyon snakes around, turning at right angles to avoid a series of natural walls of sandstone. 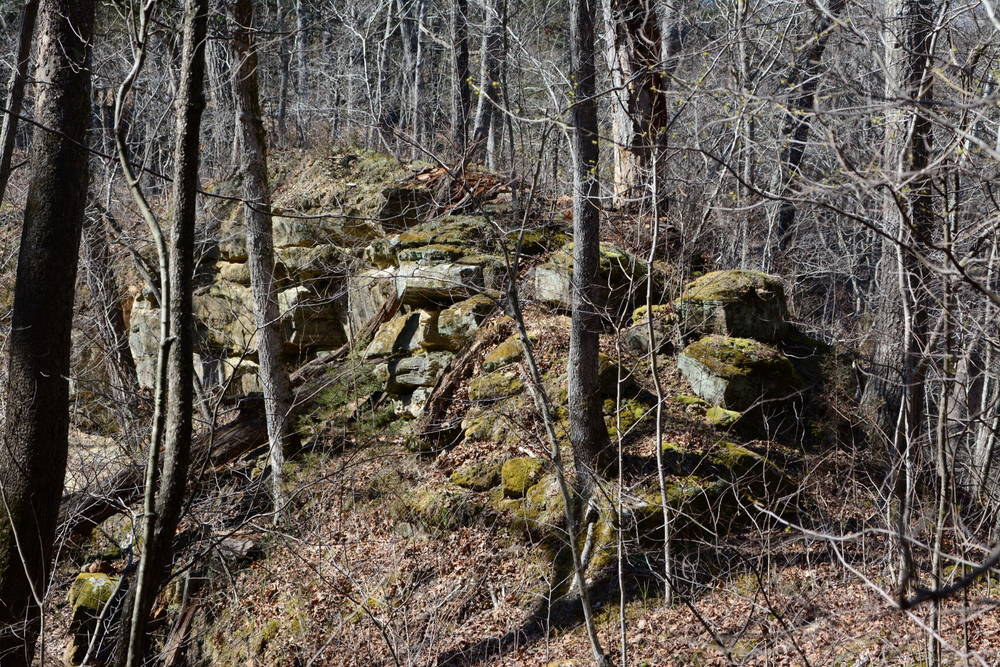 After becoming narrower and narrower, the canyon eventually reaches a deep rock shelter. There's no doubt that this spot is the crown jewel of the state park. 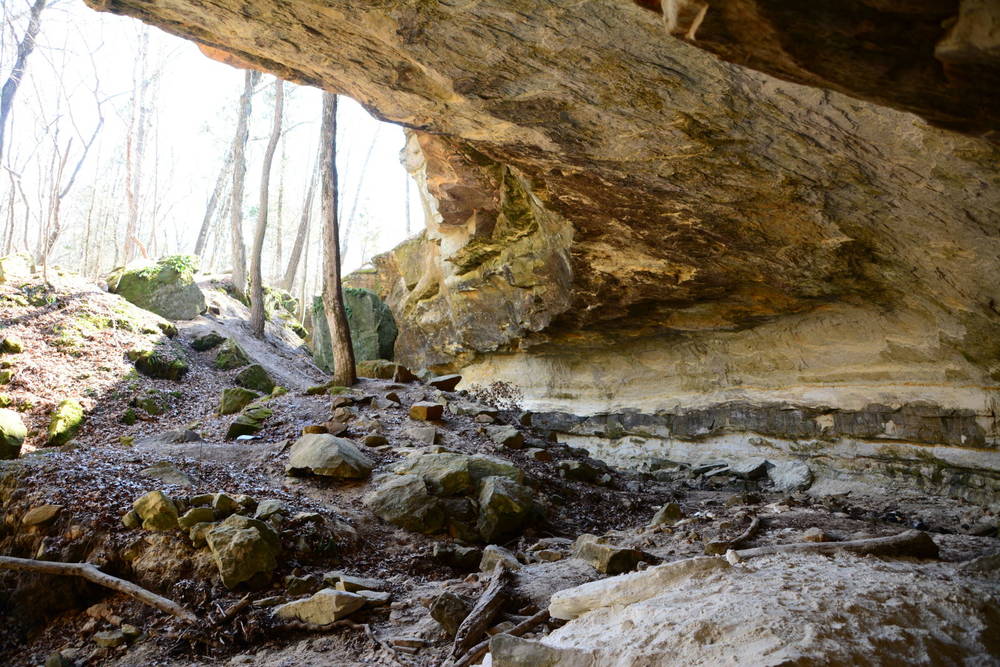 At the back of the shelter, the sandstone has eroded to create a geological sampler of colorful rock layers, including a conspicuous blue layer. 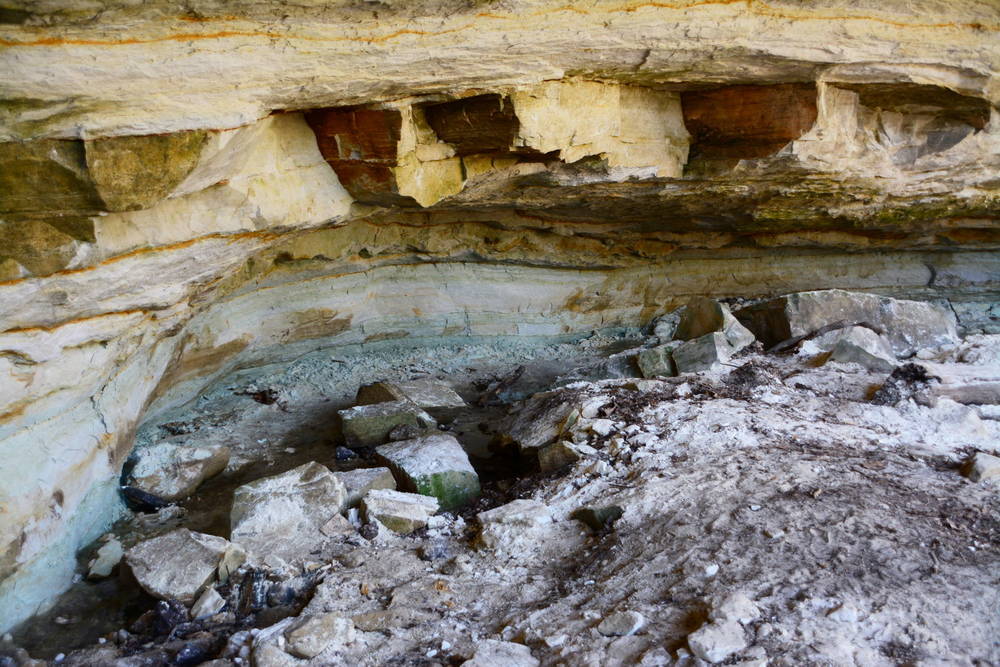 Large boulders have tumbled around the shelter. One of these precarious rocks is in the shape of a triangle. 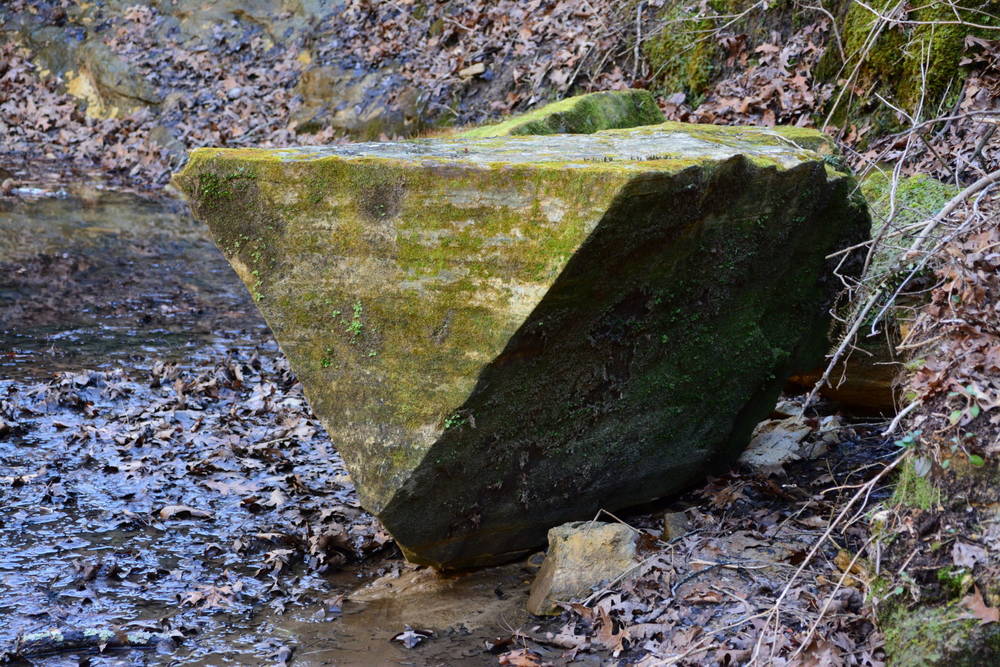 Upstream from the rock shelter, the canyon flattens out. The creek is still picturesque as it tumbles over small ledges. 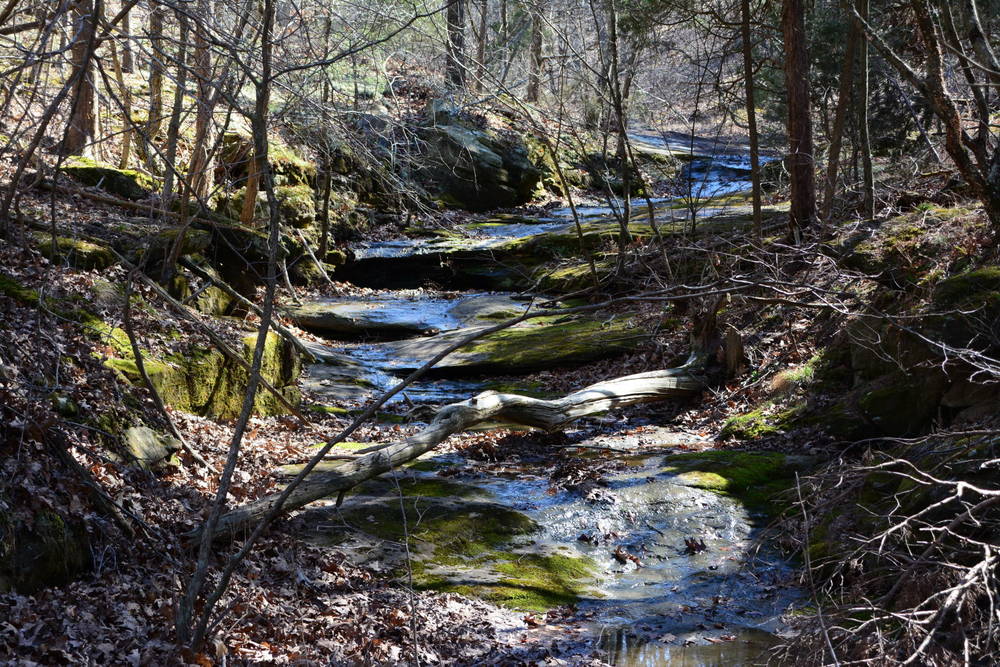 The entire Sandstone Canyon Trail is 4 miles long, but a shortcut connector trail halves that distance, making it easier to get to and from the canyon.

A second trail leading to the other side of the state park is presently under construction. So far, the park has proven to be very popular on weekends and the parking lot often fills to capacity. The second trailhead and parking area should help ease that problem somewhat. 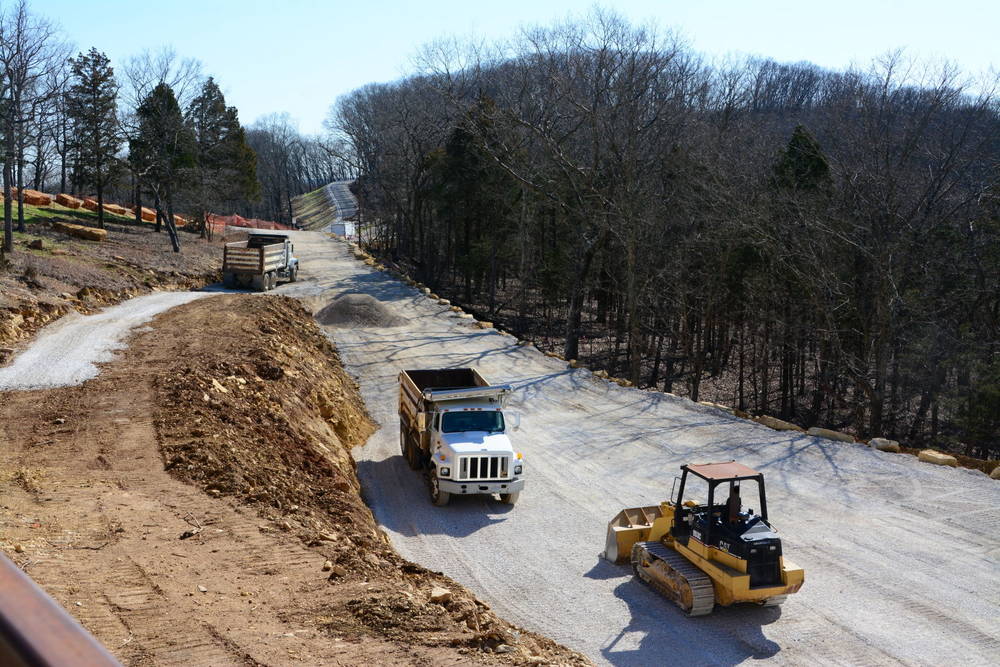 We have our own impressive canyons nearby in Southeast Missouri and Southern Illinois, but Don Robinson State Park is well worth visiting if you are heading to the St. Louis area.

From Cape Girardeau, follow I-55 north to Festus. Take Exit 175 for Route A and turn left. Continue on Route A to Hillsboro. At the interchange with Highway 21, turn left at the ramp for Highway 21 south. After a couple miles, the freeway will end. At the end of the offramp, turn right on Route B. Follow Route B to Cedar Hill. At the intersection with Highway 30, go straight through the stoplight as the road becomes Route NN. Drive another 5.7 miles and turn right on Byrnesville Road. Follow this paved road for 1.3 miles and look for the entrance to the state park on the left.

Note: Another option is to take I-55 to Route M at Barnhart and then follow Route M, MM, and W to Byrnesville Road. However, this route involves driving through the city limits of Byrnes Mill. Before he died, Don Robinson waged a unsuccessful petition drive to disincorporate Byrnes Mill, a village long known for its speed traps. Even in recent years the village continues to derive a significant portion of its budget from traffic tickets.