The Byrd family, as I described in a recent blog, left their fingerprints over early Cape Girardeau County history. After moving from Tennessee in 1799, Amos Byrd and his sons Stephen, Abraham, John, and Moses were able to obtain generous land grants from the Spanish government. The Byrd name quickly started appearing on maps in the form of Byrd Creek, Byrd Township, and Byrd Hills. 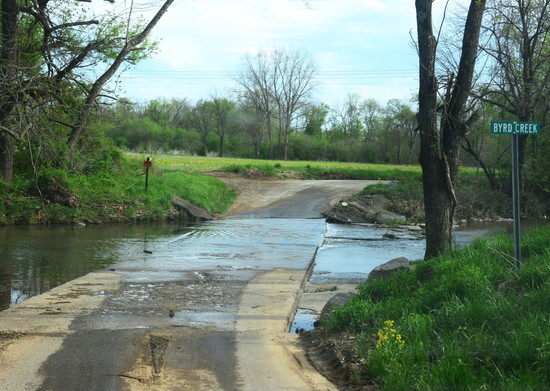 A map of the first landowners in Cape Girardeau County shows the large number of parcels owned by the Byrds northwest of Jackson. I've highlighted the original Spanish land grants on the map: Abraham Byrd in red, Stephen Byrd in green, and the rest in yellow. After the American government took over and started selling land, the Byrds also purchased numerous tracts to fill in the gaps between the original grants. 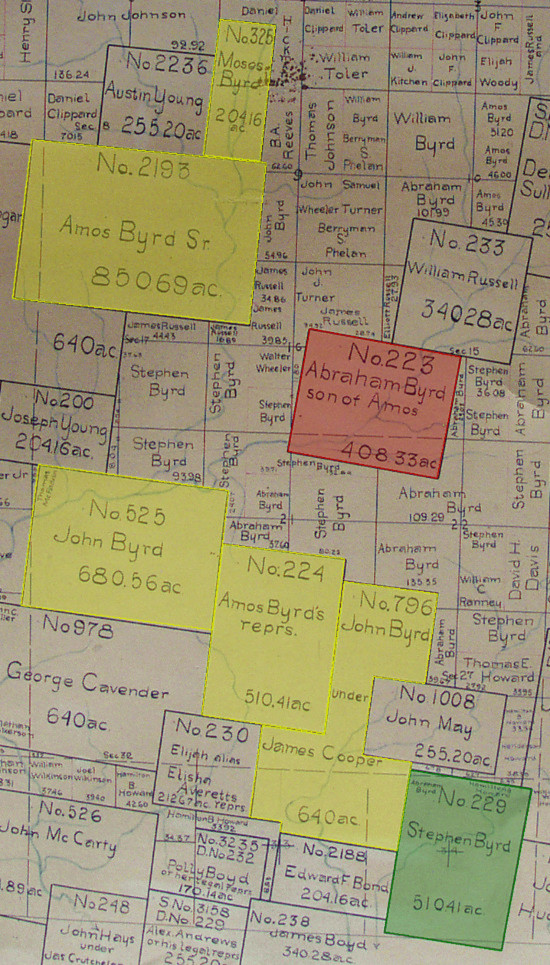 Abraham and Stephen constructed impressive stone houses on their grants featuring thick walls of limestone quarried from the vicinity of Byrd Creek. Both of these house, approaching 200 years old, are still standing. Of the two houses, the most well-known is the Abraham Byrd House, easily seen from County Road 442 just past the end of Route FF west of Fruitland. 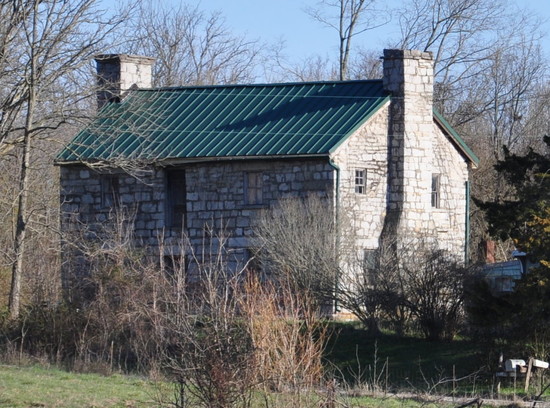 The inscription "A.B. Oct 1827" appears above the front door, implying that Abraham Byrd completed the house in October 1827. This was apparently inspired by the German practice of putting a hauspruch (house saying) above the entrance to a home. 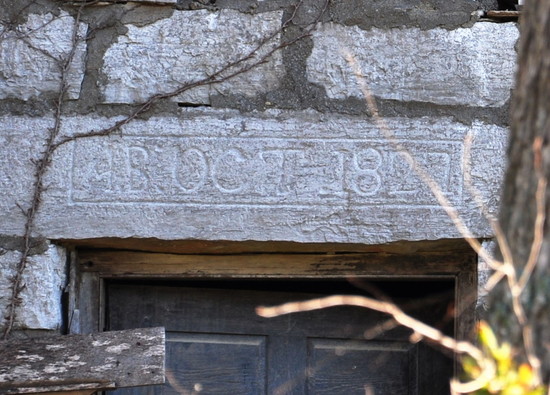 Although privately owned and posted against trespassing, the home's architecture can be readily appreciated from the road. The style is known today as an "I-house" (dubbed because it was most popular in the "I" states of Indiana, Illinois, and Iowa).

In 2007, the house was added to the National Register of Historic Places. The conclusion of the nomination form states:

The Abraham Byrd House is a rare example of vernacular limestone I-house construction in Southeast Missouri. The Abraham Byrd House had a significant role in the local history as what was once known as a "plantation house", that served the Byrd family and those slaves that resided on the farm. While the I-house was considered the "farmers mansion," the Byrd house being constructed entirely of limestone, set it apart from the other I-houses in the area.

It was certainly built to last. A tornado reportedly damaged the wooden porches in 1927, but the basic structure has remained intact despite periods of abandonment.

Abraham's brother Stephen also built a similar stone I-house on his grant a few miles to the south. Sitting at the end of a private driveway (Cornerstone Lane) off Route D northwest of Jackson, this house isn't as well known. 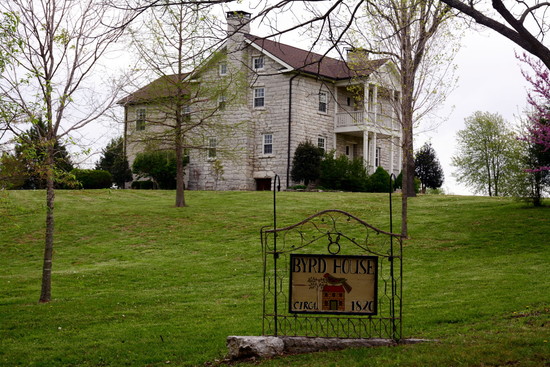 Stephen's house doesn't have a hauspruch inscription, so the exact date of construction is unknown. The identity of the architect also remains a mystery, although it's possible it was designed by Charnell Glasscock. He built another stone I-house, the circa 1816 Criddle House in Jackson, which shares many similar details. Glasscock is best known for overseeing construction of Old McKendree Chapel.

This "farmers mansion" reflected Stephen's wealth and his prominence in the community. Along with George Frederick Bollinger, he represented Cape Girardeau County in the first session of the Missouri Territorial House of Representatives. In 1820, he was one of the delegates elected from the county to attend the first state constitutional convention. 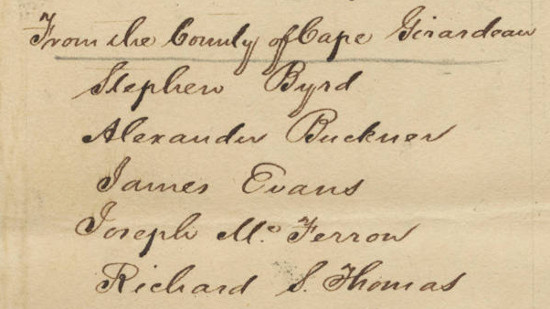 In Missouri's Struggle for Statehood, 1804-1821, author Floyd C. Shoemaker examined the delegates and classified Byrd as one of the wealthier convention members. On the other hand, Byrd was also one of the least influential during the proceedings: he didn't propose any significant measures, and when it came to voting, he frequently was on the losing side.

Stephen Byrd apparently didn't live in the stone house for too many years, as records indicate that he had moved to Lawrence County, Arkansas, by the mid 1830s. He sold the property to Abraham, which meant that his brother owned both stone houses.

A photograph taken for the Historic American Buildings Survey in the 1930s shows that Stephen's house was still in decent condition. 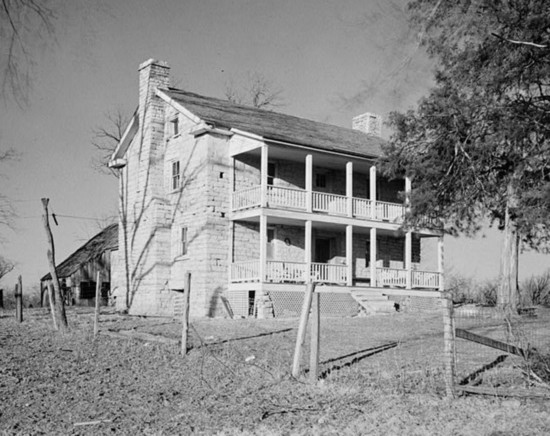 It fell into disrepair in later years, however. At one point the interior was damaged by fire, leaving the structure in such deplorable condition that it was on the verge of demolition.

In 1998, James and Rebecca Beil happened to glimpse the house through the trees, and they were hooked. This was the beginning of a seven-year adventure to fully restore the house -- a feat made possible by help from many people (and some good luck). 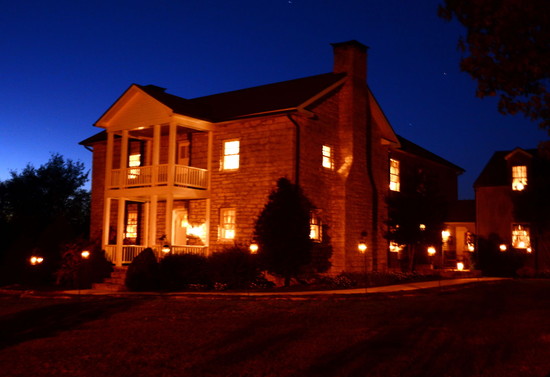 With the restoration complete, the Beils have been wanting to host events at the house. This year, everything has finally come together for the first such event: a series of holiday dinners. Scheduled for Fridays and Saturdays from Nov. 28 through Dec. 20, these five-course dinners will feature authentic recipes including Thomas Jefferson's sweet potato biscuits and Martha Washington's chocolate cake. Actors in costume will portray members of the Byrd family circa 1820.

And did I mention that I'll be appearing as the narrator for some of the dinners?