Boy, was I wrong!

Last year, after filming wrapped on "Gone Girl", I was concerned about how Cape Girardeau would be portrayed. In the book, the fictional setting of North Carthage is described as a pretty horrible place, full of homeless people, squatters, and druggies, along with a surplus of dilapidated buildings.

Considering the reputation of the director, it seemed likely that the movie version of North Carthage would be equally horrible. Cape Girardeau ran the risk of getting the full David Fincher treatment, making the town into a dark and creepy place on screen.

It's a good thing I didn't, however, because now that the movie is out, it's clear that there was nothing to worry about.

Unlike the book, the movie adaptation only makes passing references to homelessness and drug problems. Right from the beginning of the film, Cape Girardeau shines as a quaint town, and a place that is actually upbeat.

The opening montage, featuring several scenes around town, is generally positive. One depressing shot is a quick look at the collapsing storefront on Good Hope Street with the mispelled "NO LOTERING" notice. And even that brief glimpse is actually more quirky than dark, setting the stage for a movie that, somehow, has incorporated some funny and amusing moments amid all of the sinister machinations.

Yes, David Fincher and his crew have delivered quite a surprise: a movie that makes Cape Girardeau look good, maybe even better than reality. We don't need to distance ourselves from North Carthage after all! (Well, at least the movie incarnation... we'll just have to pretend that the book's version of North Carthage is based on some other town.)

The big question, of course, is whether the region can successfully capitalize on the tourism opportunities. One hurdle is that "Gone Girl" is definitely not a family friendly movie, and so any tourism marketing will have to be limited to adults who aren't offended by R-rated material. Then again, Albuquerque is currently doing well with "Breaking Bad" tourism, and that's hardly a wholesome story.

Another pitfall is whether the movie showed enough of Cape Girardeau's uniqueness to motivate visitors to come and explore. Most local places are only shown briefly, in constrast to the amount of effort and time spent filming them. The Bar doesn't get as much screen time as I expected, although the snowstorm scene is fun to watch. It will be interesting to see how long it takes for some local business to start hawking the "Protect Your Nuts" T-shirt that Carrie Coon's character wears while tending The Bar. 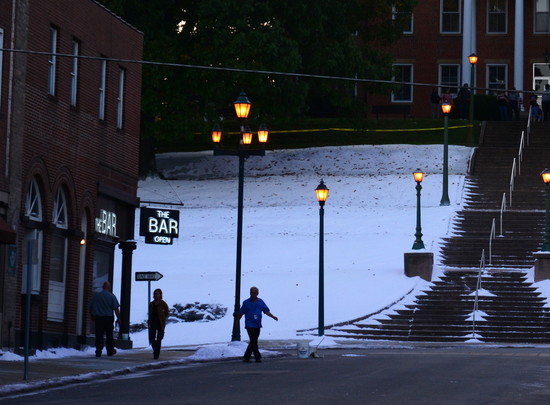 The crew works to turn Themis Street into a winter wonderland on Oct. 11, 2013.

The only local location that is overplayed is the Emerson Bridge, featured several times throughout the film. Indeed, toward the end, I was starting to think, "Are they ever going to get sick of driving across the bridge and looking at the phony city skyline?"

Although not as obvious, Southern Illinois is also represented. The main lodge and swimming pool at Giant City State Park look great, even if the interior of the cabins are depicted as shabby. Also dramatic is the Thebes riverfront, shown both in the movie and in the promotional posters. (Although I should point out that Thebes doesn't smell like feces. Dead fish, maybe.) The tiny hamlet of Gale, Illinois, also gets a nod when the photogenic steel bridge on Old Highway 3 is shown. 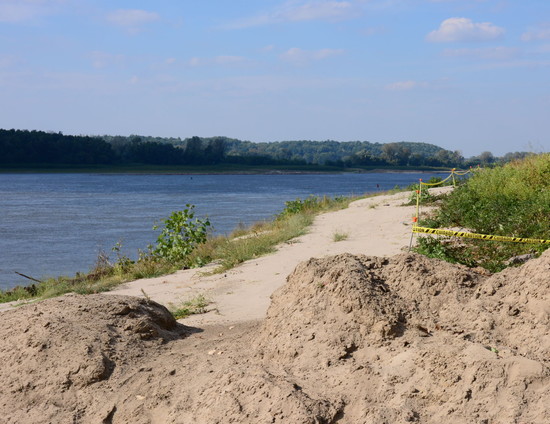 Caution tape marked the location where filming would later take place at the Thebes boat ramp.

Several reviews have made mention of Cape Girardeau's role in the movie. One reviewer, however, noted ominously that the setting is "suitably nondescript." That's not a good motivator for tourism.

We'll have to see how things play out, but thankfully we don't have to worry about being portrayed as a horrible place. The danger now is that we might be seen as something else: a boring place.