That was a favorite phrase of "Colonel" Matt Morrison, the weather-forecasting curmudgeon who was frequently interviewed in the Weekly Tribune newspaper during the mid-1910s. In his diatribes, he often complained that so many politicians -- from the local to the international level -- were going "bugs."

This must have been a term for "crazy." However, it seems that Morrison was truly the crazy one.

Thanks to his weather forecasts (regardless of accuracy) and his homespun political commentary, he had developed enough of a following that the newspaper felt compelled to print his rants almost every week. He had also amassed a considerable estate, estimated to be worth $50,000 at the time of his death in 1918.

In one interview, he bragged, "I've got enough spondulix soaked away in one of them St. Louis banks to finance this war against Mexico, if I wanted to start something."

His fortune started in the late 1860s, when he was hired by Peter Held (the founder of Dutchtown) to drive a passenger and mail hack from Cape Girardeau to Allenville, where the Iron Mountain Railroad had just been completed. Within a few months, he had earned enough to purchase the business outright from Held.

This led to other business ventures, but it seems that he made the most money as a slumlord. A newspaper story from 1916 neatly sums up his business philosophy:

When justices of the peace, deputy sheriffs, and his own arguments failed to persuade Berdie Lennox, colored, and her son, Joshua, to vacate one of his houses on Jefferson avenue, Col. Matt Morrison, retired blacksmith and goosebone weather prophet, yesterday afternoon removed the roof during the heavy downpour. This action brought the desired result, and so long as it accomplished its purpose, the Colonel says he doesn't care about the expense of recovering the house.

Morrison frequently used his soapbox in the newspaper to rail against higher taxes, especially those taxes that might affect him personally. In one missive about a bond-issue proposal to build paved highways statewide, he said:

I'm about convinced the whole world's goin' bugs. Can't pick up a paper any more without findin' some item that makes you sick at the stummick. First our taxes are raised and then somebody wants to grab all the money and run with it. That good roads bond issue, which called for a million dollars, was the roughest proposition I ever heard of. The whole gang ought to be loaded in a wagon and carted away to Farmington before they become violent and hurt somebody.

He liked to rail against Congress, too:

This here Congress that we got now takes the puddin'. You know they go ahead and vote a tax on the liquor business, an' then go right ahead an' put the liqour business out of business. Why, them Congressmen have nothin' but ivory above the shoulders. There ain't nobody at home when Congress goes to thinkin'! I have to laff everytime I pick up the paper.

While not shy about offering his opinion, he was shy about confirming his age or revealing the identity of his girlfriend and future wife. A news story on March 3, 1916, announced his engagement:

Matt Morrison Is To Marry A Widow

Colonel Matt Morrison, goosebone weather prophet, landlord and gentleman of leisure, is engaged. His is going to be married April 2, or a few days later. He refuses to reveal the exact date.

The Colonel winked his left eye wisely and grinned broadly when a representative of The Tribune halted him on the street yesterday, to inquire the lucky girl's name.

"Keep it quiet; don't touch the subject in the paper," said the Colonel, first smiling, then tittering and finally breaking into a loud guffaw.

"Gosh ding my hide," he shouted, "you want to keep your eye on some of us boys."

"Who's that charming widow you are making such a fuss about?" the weather prophet was asked.

"Nothin' doing right now," he replied, "but about the first of April, come and talk to me. But don't let it get out just yet. I'll slip you the name, the time and the place just before I get ready to splice."

According to the report in circulation, and which originates in the Colonel's family, his fiancee is employed in a Cape Girardeau store. The story of the courtship teems with romance.

It is said that Col. Morrison fell in love with the young widow as she walked by his home on her way to and from work. The Colonel became madly infatuated with her, and a flirtation ensued. A mutual friend, acting at the instigation of cupid, brought about an introduction.

The engagement, which has existed for about two weeks, has created much comment among the friends of Col. Morrison. Although past 60 years of age, the Colonel looks many years younger and is as active as a boy. He is as rich as creosus.

That last sentence must refer to Croesus, a fabulosuly wealthy king from Greek history.

The marriage apparently didn't take place until the beginning of 1917, but even then, the identity of his bride remained a secret in the newspaper. After his honeymoon, the paper printed this item:

When the Colonel made his first appearance in public after taking unto himself a better half, he was confronted by a number of Cape Girardeau ladies who had expressed Leap Year intentions to accept him as their true and lawful husband.

"Nix on the mush," replied the Colonel. "I'm married now and I'm goin' to stay married. I figured it would be pretty hard on some of your wimmen to give me up, but it's all over now."

Morrison seemed to become increasingly paranoid about his age. By October, he was quoted as saying:

Well, I'm having my tombstone built this week. I ain't expecting to be planted, but to keep from bein' buried. You know when you prepare for somethin' it don't happen. That's why I'm puttin' up a tombstone with the goosebone prophet's name on it.

His final appearance in the Weekly Tribune newspaper came Jan. 11, 1918, and it contained many of his usual themes:

Col. Matt Morrison Withholds His Age, But Jots Down a Few Remarks on Current Subjects.

"Well," remarked Col. Matt Morrison, the goosebone weather prophet. "I just muffed another birthday. I am old enough to be too wise to let my wife know just how old I am. But I'm young at that.

"I have to laff everytime I see some of these old birds creeping about the city. I wuz an old man when they wuz born, but I'm still watchin' the folks plant'em. As I said once before, you can live two days in one and git by long. I'm getting mind, but I always keep the brakes on.

"Well, I see by the papers that we're goin' to dam the river. Now I've been dammin' the damn thing ever since I located in this town. I lose a patch of corn, a bunch of goats or somethin' everytime it gets up.

"The New Year slipped me a lemon. That big blind horse that I've been advertizin' for sale committed suicide as they wuz tollin' the bells for New Year's. I heard a commotion in the barn an' gits my latern. When I got out there, he wuz hanging to the manger an' as dead as a smoked pickeral. 'Happy New Year' says I to myself an' I went back home an' climbed into my winter mattress with my shoes on.

"Two days later I lost two my tenants. One dropped dead as he started for my home to pay his rent, an' the other got arrested. I'm havin' about as much luck as the Czar of Russia.

"Well, I notice there ain't no peace yet. As I said before, it looks to me like the world's done gone plum bugs.

"Well I see the City Council is goin' to call a special election to choose a Councilman in the Third ward. Why that office's been vacant for six months, an' it's now only fifty days to the regular election. What's the reason for this special election. If the Council can't fire a policeman, we ought to cut out the extra expenses and buy sausages and cornbread for the pore children in this here town."

The "Colonel" died that same day from an unexpected stroke. He could no longer hide his age: the death certificate showed he was born in 1848, making him 70 years old. Likewise, his family headstone at New Lorimier Cemetery -- where he is listed by his birth name, James M. Morrison -- also confirms his age. 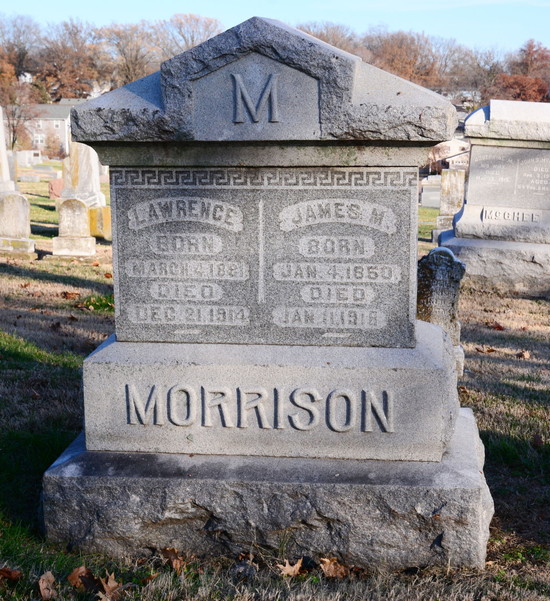 However, neither his death certificate nor his obituary in the Daily Republican newspaper revealed the name of his wife. The obit merely stated, "His first wife died a number of years ago. He was divorced from his second wife, his third wife survives him."

The newspaper reported, "He was one of Cape Girardeau's unique characters, rugged in style, active, energetic, and persistent. He always used gruffness in manner that caused those who did not know him to think he was rougher than he really was. He had his good points, among them being his tirelessness in work, another his fearlessness of opposition and the determination to make his way in life's battle."

Indeed, it's safe to say that Col. Matt Morrison was indeed one of the most colorful characters in the city's history.