The Shawnee National Forest offers many short trails with big payoffs. Garden of the Gods is easily the best of these, with spectacular scenery only minutes away from the parking lot.

Another excellent -- but more obscure -- choice is Dutchman Lake near Vienna, Illinois. A trail skirts around the northern edge of the lake, providing access to three canyons within the first half mile. A fourth canyon is only another half mile beyond, but by that point it's hard to keep track of the dizzying number of bluffs and rock formations.

The first canyon is dotted by massive sandstone monoliths that have broken away from the hillside. 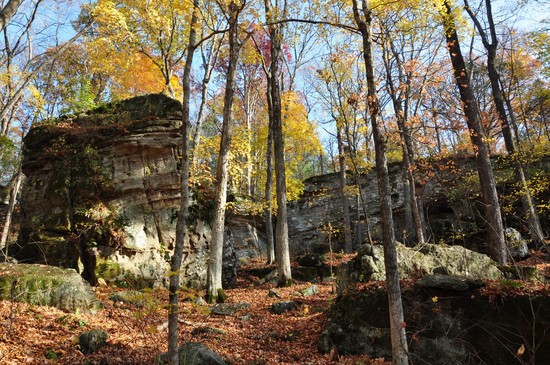 One boulder, dangling from the top of the bluff, is on the verge of breaking free. 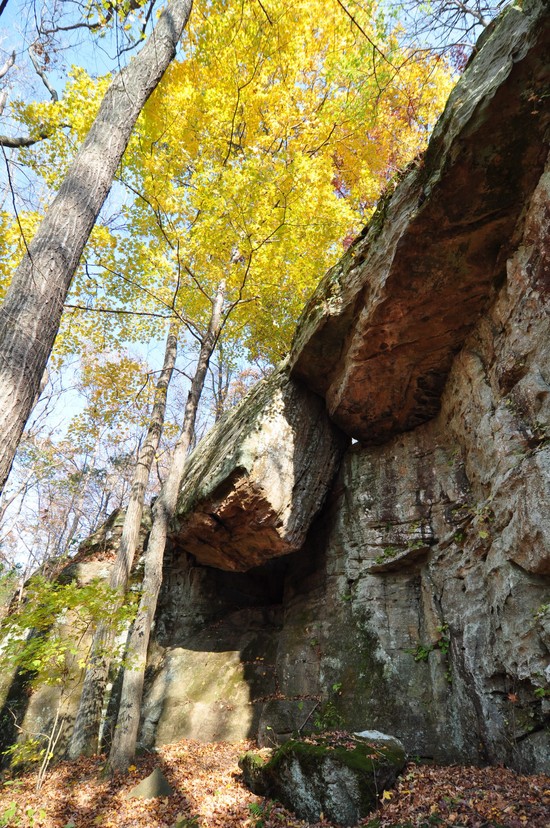 Like so many Southern Illinois canyons, this one ends at a small waterfall and plunge pool. Thanks to our drought, the waterfall hasn't featured falling water in months, but the pool has managed to avoid evaporating away. 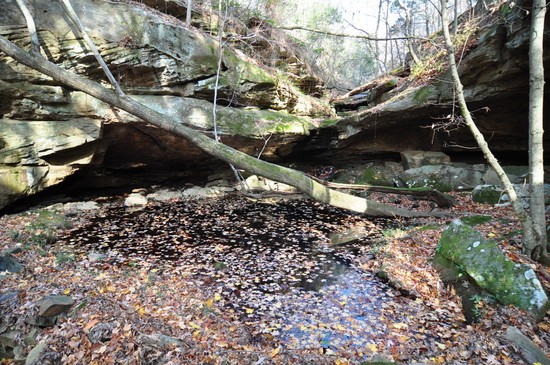 Canyon #2 is larger, featuring a taller -- but still dry -- waterfall. 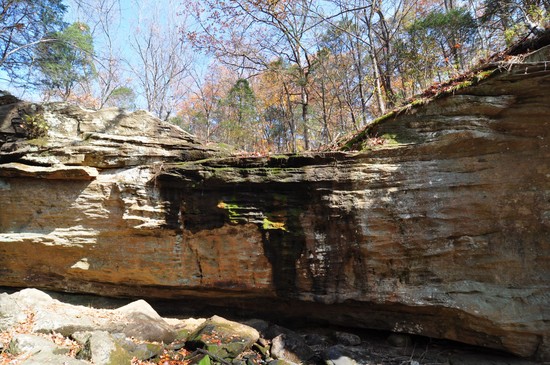 Below the waterfall, the second canyon is choked with boulders lying at every conceivable angle. This must be quite a spectacle during a flash flood! 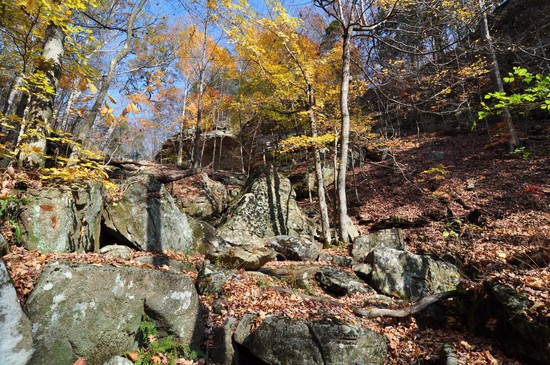 While most of the bluffs around Dutchman Lake are composed of sandstone, this canyon includes a small outcrop of limestone with fascinating textures. 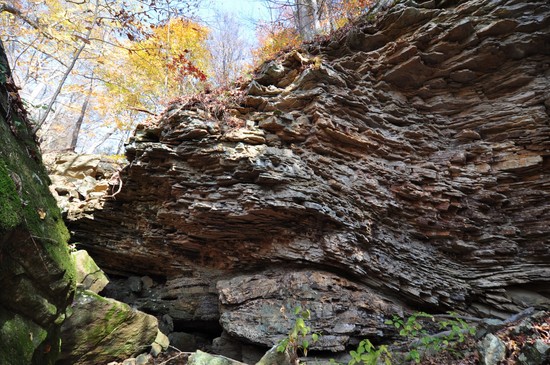 On the opposite side, the sandstone has eroded to create a large rock shelter. It would be interesting to conduct an inventory of all of the rock shelters in the Shawnee National Forest -- they must number in the hundreds, if not more. 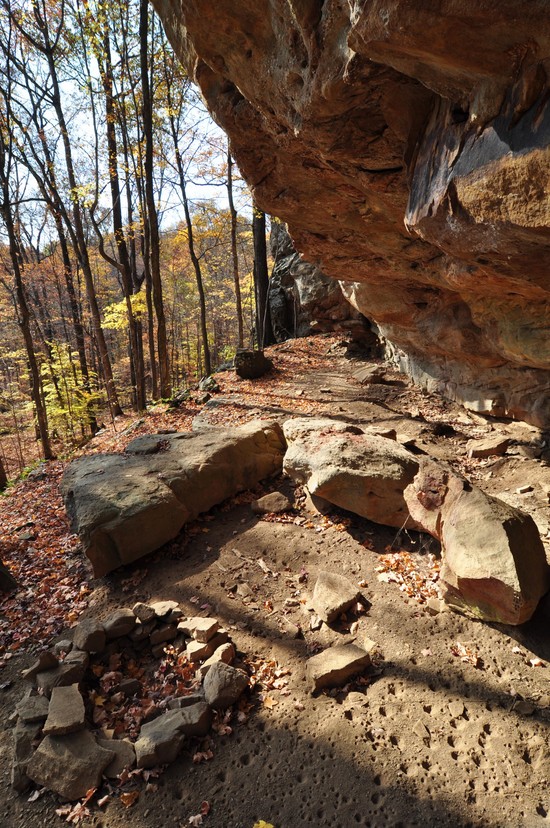 A narrow crevice leads behind the bluff and makes a sharp 90 degree turn to the left. This is another kind of formation that can be found throughout Southern Illinois. 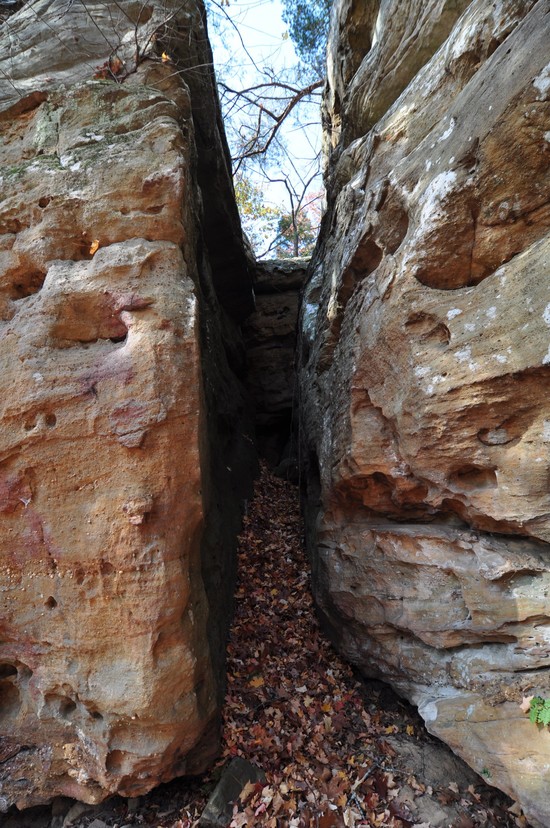 Next up is the third canyon, showcasing a small but secluded rock shelter. 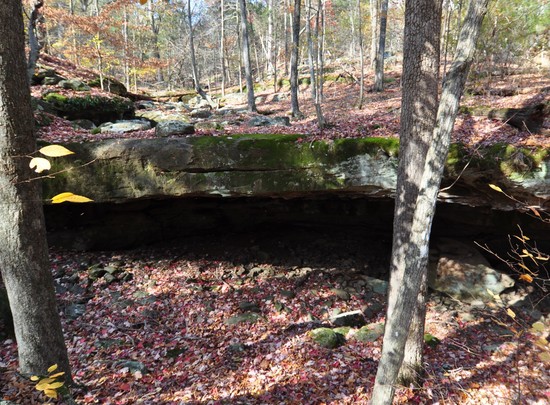 Given enough time, the wet-weather creek might be able to erode this into a natural bridge. 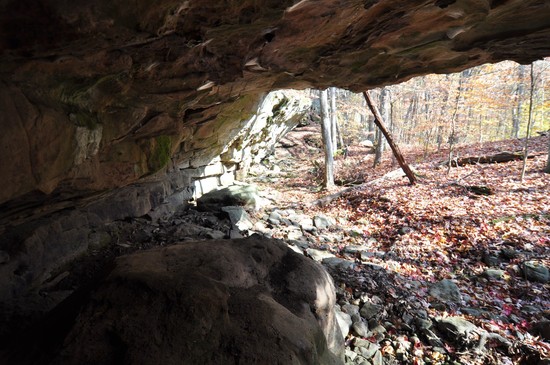 From here, the trail rises above Dutchman Lake, following a hillside dotted by random rocks. 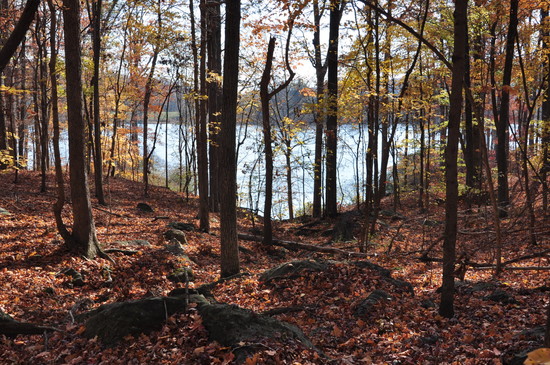 Around the corner, however, is one last surprise: another series of bluffs. 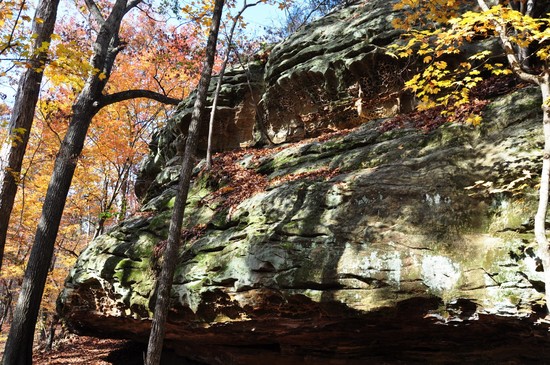 The fourth canyon only has cliffs on one side, but the rocks are no less dramatic than anywhere else. 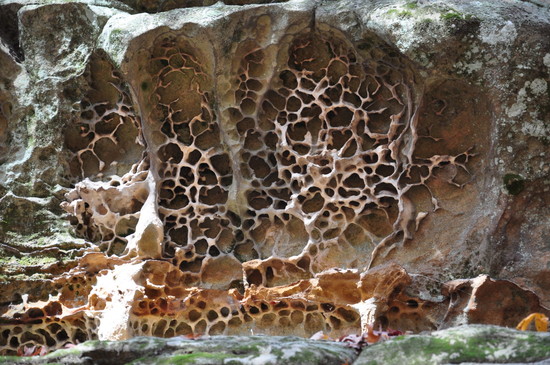 These rocks continue for some distance before receding away from the trail. 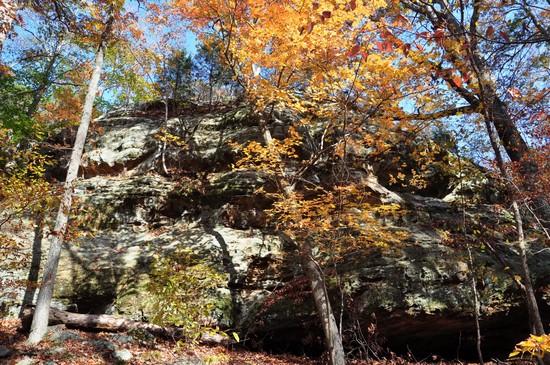 While the trail does continue, it becomes more boring, eventually climbing to the top of the hill and striking an old forest road. For those looking to get the most bang for the hike, the best bet is to turn around here.

From Cape Girardeau, take Highway 146 east through McClure, Ware, Jonesboro, Anna, and on to Vienna. At the four-way stop in Vienna, turn left on US 45 north. Continue to the outskirts of town and turn left on Holley Road (look for the sign for Dutchman Lake). Then make an immediate right turn on Dutchman Lake Road and drive north on this blacktop road nearly 4 miles. Look for the access road to Dutchman Lake on the left. Follow this gravel road, shown as Fishing Hole Lane on some maps, to the boat ramp and dam. Park where convenient. 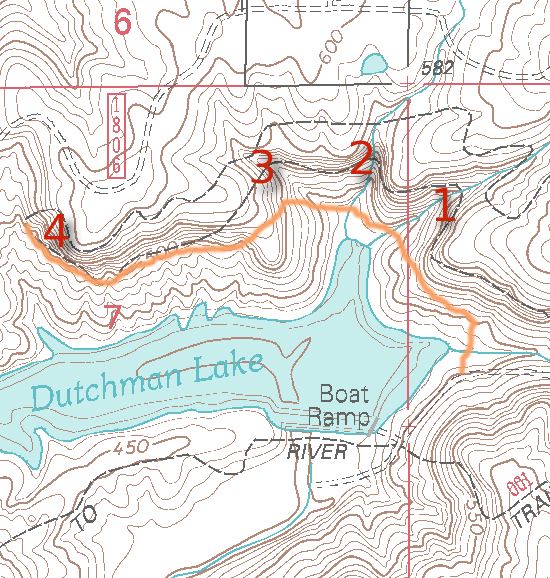 From the dam, walk back along the road a short distance to where the road curves away from the lake. Look for the beginning of the trail on the left, marked by a pink ribbon. The trail crosses a pair of intermittent creeks that flow into the lake, then climbs a hill and curves to the left. After a short distance, the trail meets three creeks in succession, each leading to a canyon. Venture off-trail along the creeks to explore the canyons.

Near the third canyon, the trail forks, with the right branch heading north into the woods. Instead, take the left fork as it meanders along the hillside above the lake and toward the fourth canyon. If the trail is hard to follow, just keep going west parallel to the lake before reaching the bluffs on the right.