The Bulge Hole: Every bit as peculiar as the name

Oh come on, another rock shelter?

That's what I was thinking while hiking along a canyon near Vienna, Illinois. Around every corner, I found yet another rock shelter or tall bluff or waterfall or something. 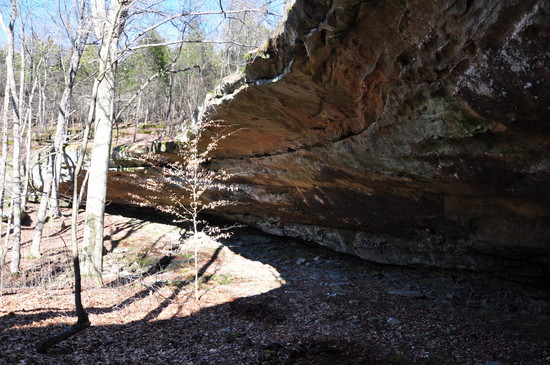 I was really looking for an easy way out of the canyon, but was thwarted by more beautiful scenery. What a dilemma. 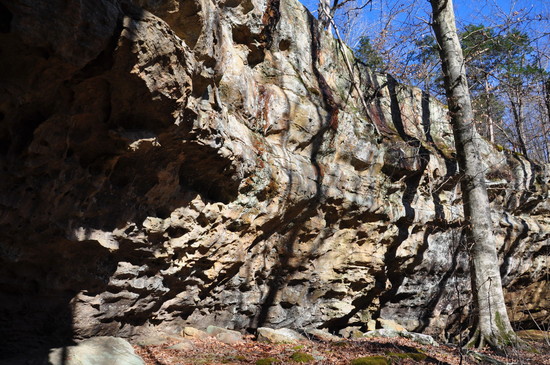 Located within the Shawnee National Forest, this place is called Bulge Hole Ecological Area. The peculiar name refers to a bulging rock overhang that is a hybrid between a shelter and a cave. 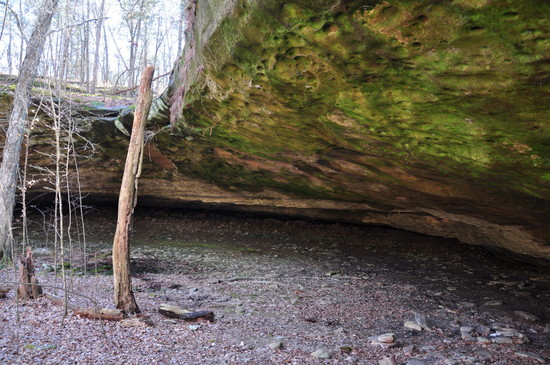 At first glance, the Bulge Hole looks like any old shelter. But the interior keeps going and going... 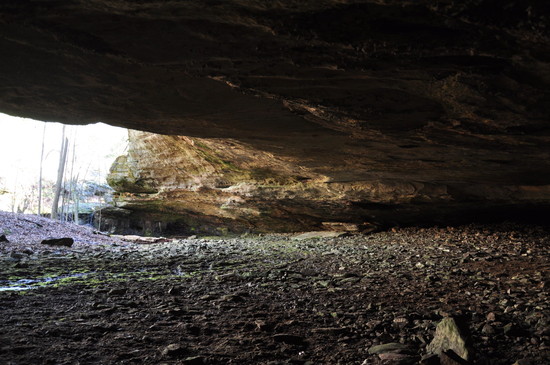 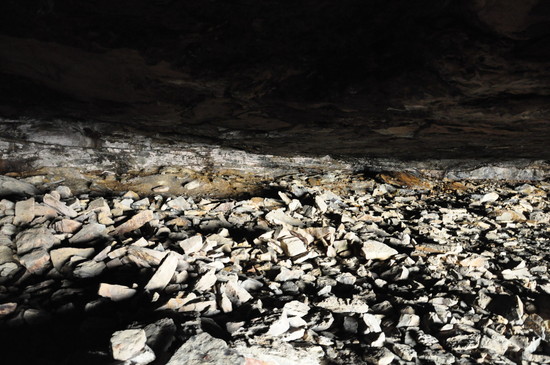 ...until the ceiling and floor finally meet in the darkness. With large trees sitting in front, it's difficult to capture the entire formation at once. From a distance, the hole appears as a black void. 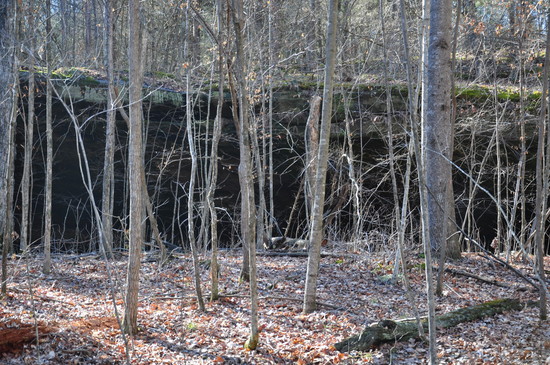 From above, it's only possible to see a portion of the opening. The entire shelter is U-shaped, encompassing the head of the canyon. 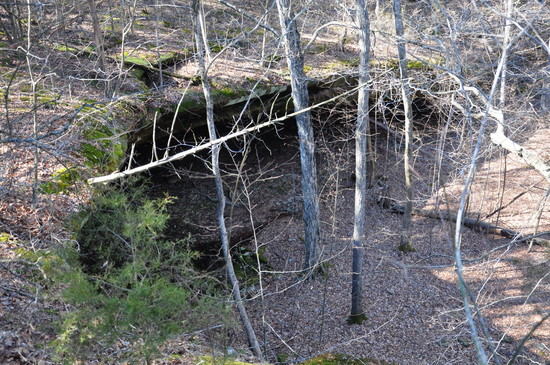 A small creek empties into the canyon via a waterfall. 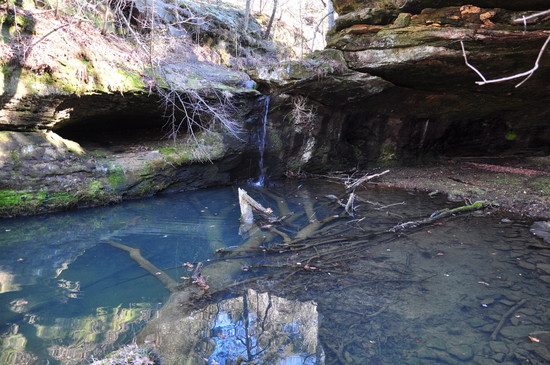 Just downstream, the creek passes below a second large shelter with its own wet-weather waterfall. If this formation were located anywhere else, it would be a big deal. But not here. It looks puny compared to the Bulge Hole. 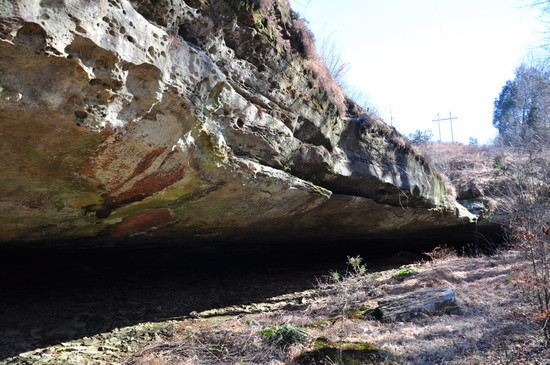 Continuing north along the canyon, another rock shelter can be found on the right, followed by a series of bluffs. Oh look, there's another shelter... and more rocks! 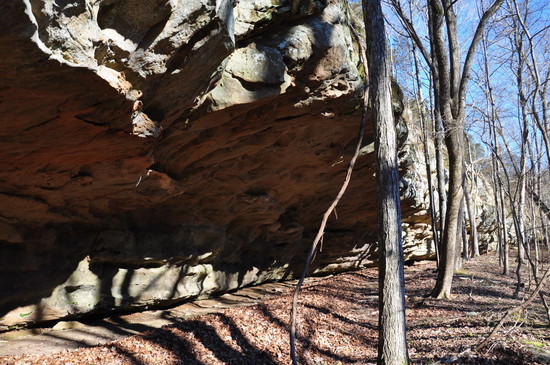 I eventually turned around and started exploring the other side, only to get sidetracked by a smaller canyon branching off to the west. This side canyon led to a dead end. But what a dead end! 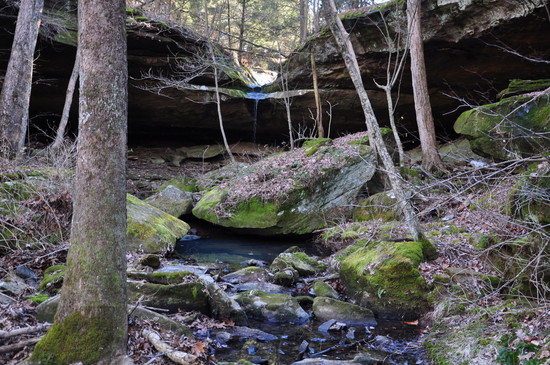 Water from another creek spills over a ledge, forming a classic waterfall. 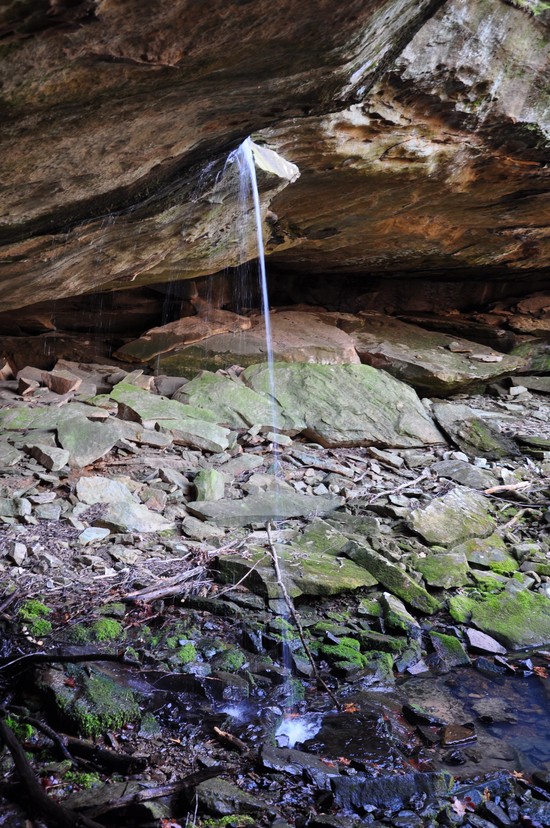 One wall within the canyon was coated with water seeping from the hillside above. 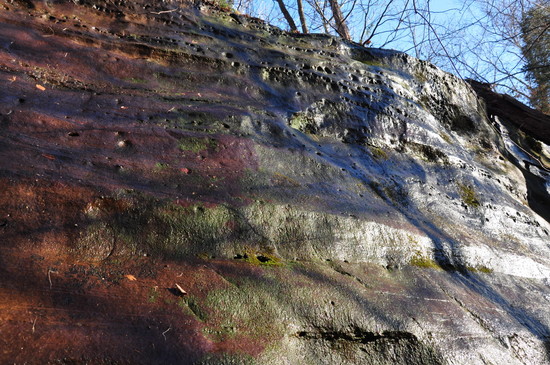 Suffering from rock formation fatigue, I finally found an escape route via an opening in the bluff line. Back on higher ground, I could hear the rumble of traffic on nearby Interstate 24. Motorists cruising between Nashville and St. Louis have no idea that they are passing only a quarter-mile from such a spectacular spot. 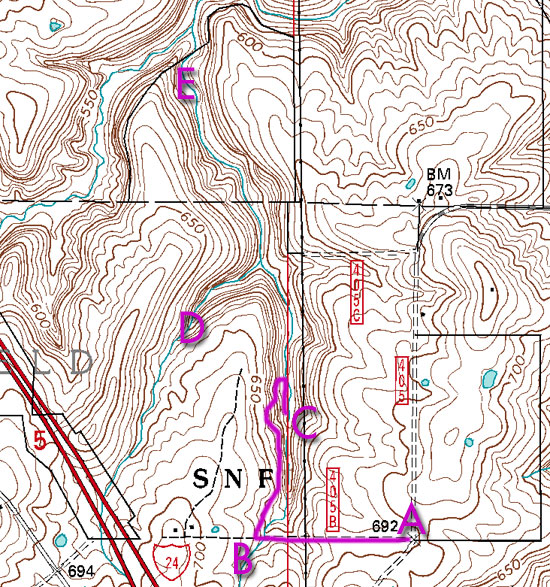 From the trailhead (point A on the map), walk one-third of a mile west on the muddy road until dropping down to a pair of creek crossings. Look for the "Bulge Hole Ecological Area" sign on the right (B). 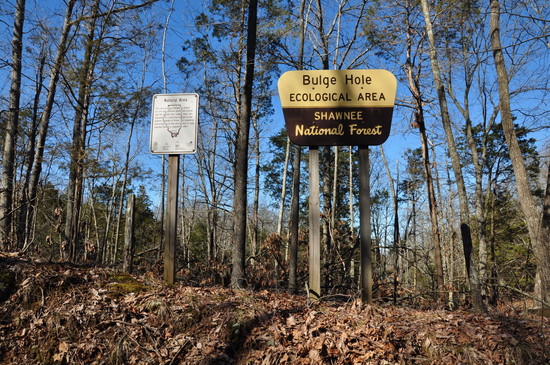 This is where it gets tricky. At the second creek crossing, walk north along some sandstone glades. 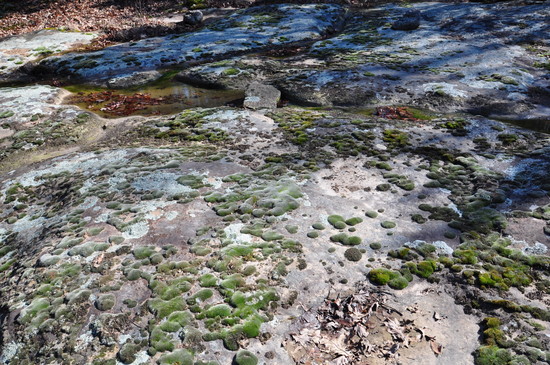 The creek soon drains into a ravine. Instead of trying to crawl through the ravine, stick to the high ground on the left side of the creek and walk north. Cross through a powerline clearing and keep following the creek and hillside. Ahead is sharp dropoff: this is the ledge above the Bulge Hole (C).

Follow the rim of the hole and keep walking north until you find an opening in the bluff where you can easily get down to the canyon floor. Then head back to the Bulge Hole.

If you want, you can explore the side canyon to the west (D) and the main canyon to the north as far as the edge of National Forest property (E).

The Bulge Hole area can be found at the far southeast corner of the Goreville topographic quadrangle map (available here). The Geocaching.com website also has some details.