The Snake Road near Wolf Lake, Illinois, is famous among herpetologists for the opportunity to watch snakes as they migrate in the spring and fall.

It's also famous among those with ophidiophobia -- the fear of snakes -- as a place to avoid at all costs.

Actually, it's not that bad. Snake season officially ended Nov. 1 when the Snake Road was reopened to traffic. The Forest Service closes the road from Mar. 15 to May 15 and again Sept. 1 to Oct. 31 to protect the rambling reptiles, but the road provides a scenic drive the rest of the year. 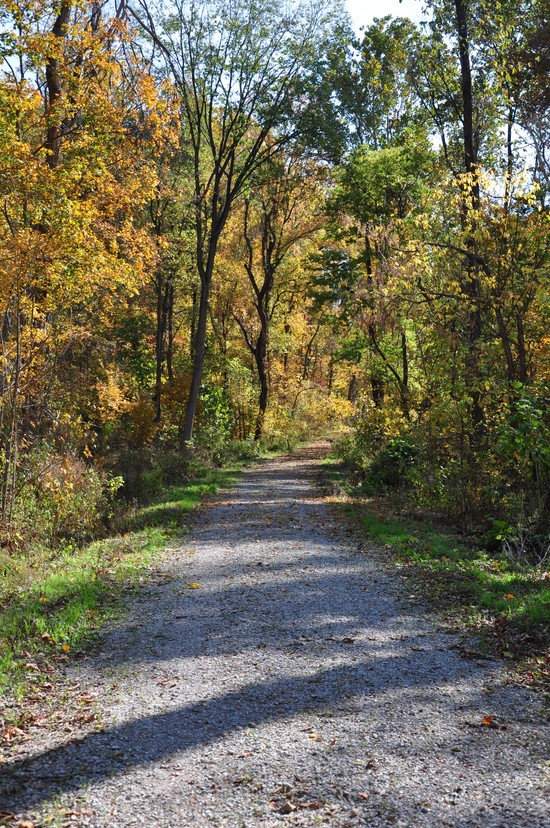 The gravel lane threads the needle between towering bluffs on the east side and lazy swampland on the west side. 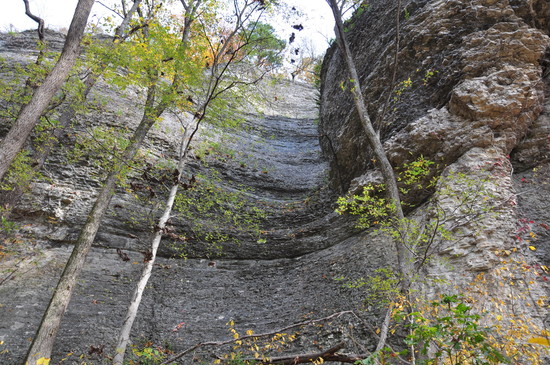 Those tall bluffs have eroded to create a peculiar rock formation called the Preacher's Eye. It's a natural arch standing well above the road. 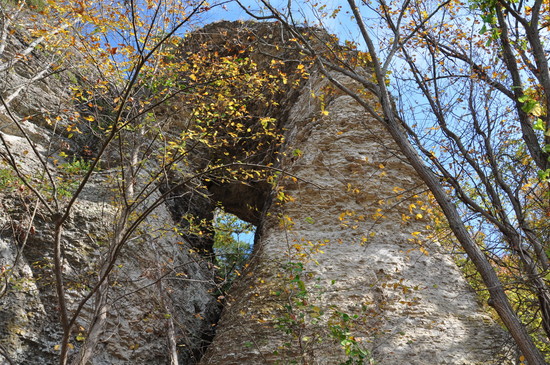 Since it can only be seen from certain angles, and is hidden by trees in the summer, the arch is easy to overlook. To find it, plug in the coordinates 37.5547717, -89.4403716 into your GPS. It's located roughly 0.6 miles north of the gate at the beginning of the Snake Road. 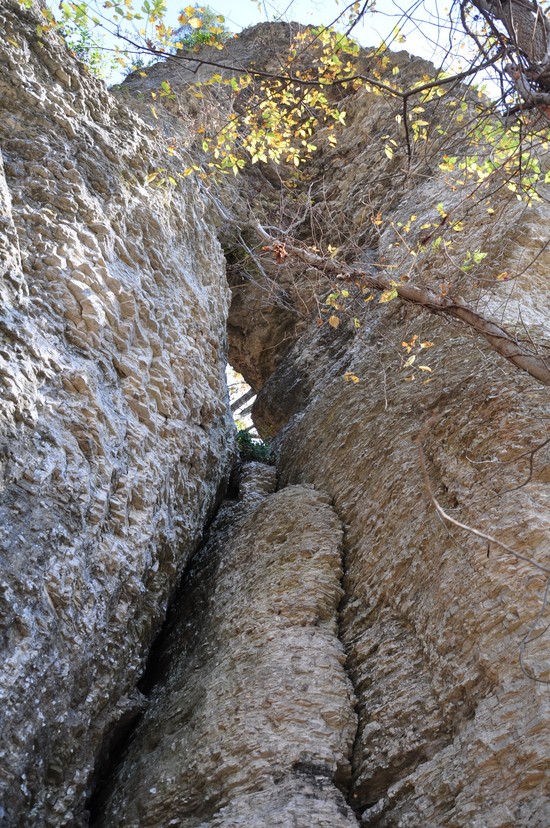 It's possible to climb the steep slope behind the arch. I wouldn't recommend it, however, as I nearly fell flat on my face several times while trying to make the ascent. On the way back down, I decided to play it safe by using the CUBS method: Completely Unencumbered Butt Slide. 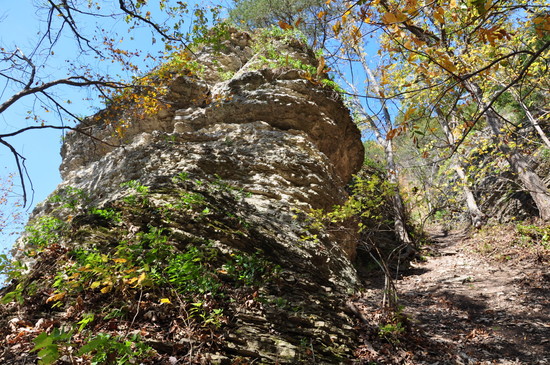 According to the The Natural Arch and Bridge Society, the Preacher's Eye has an estimated span of 8 feet and a height of 12 feet. 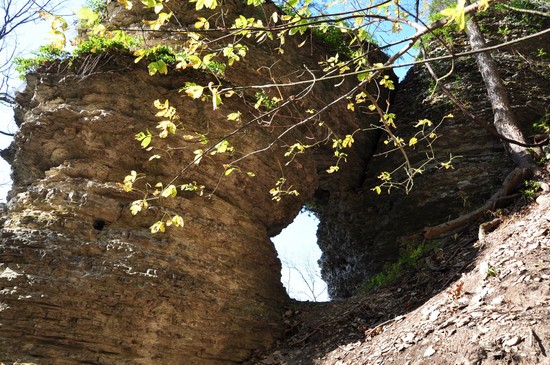 It's not as impressive as Pomona Natural Bridge and other natural formations in Southern Illinois, but this arch does have a photogenic profile. It offers a spectacular view of the swamp below. 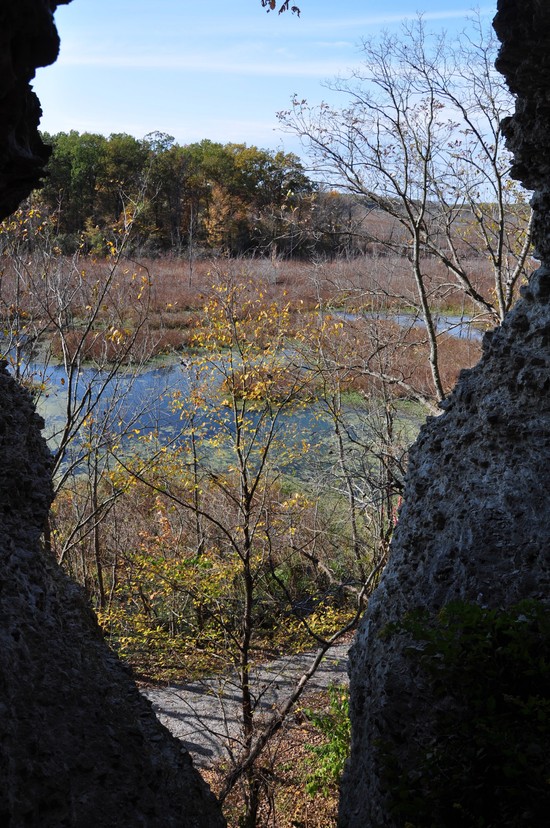 The limestone rock doesn't look particularly stable, as a large crack is forming through the top of the arch. This thing could hold together for untold millennia -- or it could collapse tomorrow. 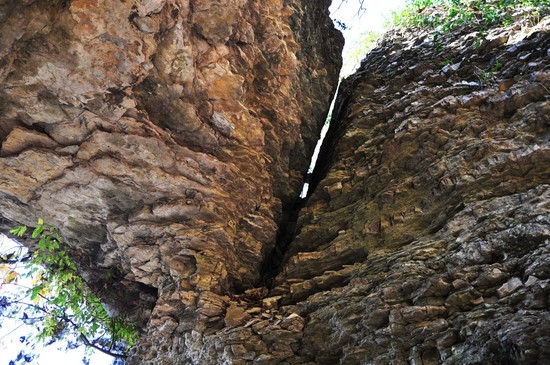 While the Snake Road ventures past many other rock formations, none are as interesting as the Preacher's Eye. Now that snake season is over for the year, there's no reason to let ophidiophobia get in the way.

From Cape Girardeau, cross the Emerson Bridge and turn left on Highway 3. Continue through McClure, Ware, and Wolf Lake. After going two miles past Wolf Lake, look for the sign announcing "La Rue Ecological Area." Turn right here on Larue Road. Continue on this gravel road across the railroad tracks and to the gate at the beginning of the Snake Road.

If the road is open, you can drive straight to the Preacher's Eye, but finding a parking spot that doesn't block the road is difficult. You can also park near the gate and walk 0.6 miles north to the arch.