October is that precious time of year between the brutal heat and humidity of summer and the even more brutal cold and ice of winter. This is when I usually spend the most time hiking, visiting places to write about for this blog.

But I have a confession to make. I've been a little bit distracted this month. The professional baseball club from St. Louis, surrounded by squirrels, tortoises, and happy flights, went on an improbable tear during the month. It's hard to concentrate when the Cardinals are in the playoffs.

It's even harder to concentrate when nearly every game is a nail-biter, when World Series records are dropping left and right, when manager Tony LaRussa has trouble using the phone.

So I haven't done much traveling this fall to the end of the pavement. Instead, I've been making various pilgrimages to Busch Stadium, and my wallet is now a lot thinner.

After watching the Cardinals win Game 6 on TV, one of the most epic games in World Series history, I didn't waste any time celebrating. I was on the Internet trying to score tickets to Game 7.

"I can't believe I'm spending this much money to go see a game," I was thinking while clicking the Confirm Order button on StubHub. Of course, I also couldn't believe that the Cardinals had just won Game 6 the way that they did.

So it was Friday afternoon that I found myself in front of Busch Stadium again. The first stop was a tent across the street where the trophies from two previous World Series victories were on display. 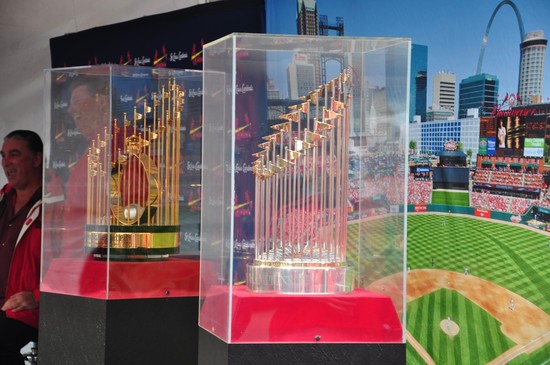 Next stop: the nose-bleed seats in Section 450. I was one row from the very top of the stadium, a vantage point that is far removed from the field, but provides an excellent panorama. 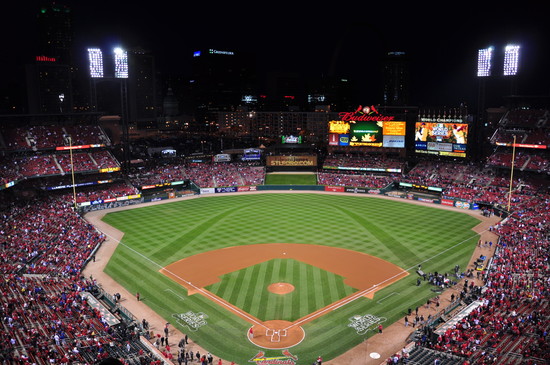 While waiting for the game to start, I soaked in the atmosphere and watched fellow fans proudly hoist their home-made signs. Naturally, the stadium was filled with David Freese-related puns ("Freese Warning", "Freeser Burned", "Texas is in a Deep Freese", "Forecast: Freese-ing Reign"). The infamous Sign Guy was in rare form, waving gems like "Carpenter has all the tools" and "We'll mess with Texas"). My favorite sign, however, proclaimed, "Not even Chuck Norris can save the Texas Rangers." 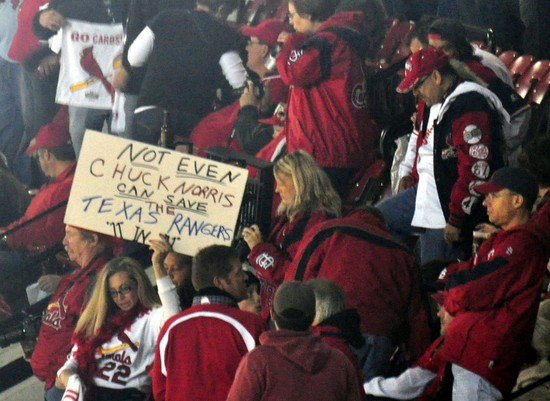 Soon the starting lineups were announced. The towel waving reached a crescendo when Freese's name was announced. 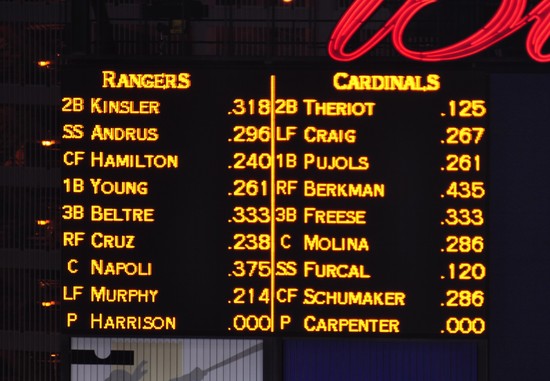 All eyes were on Chris Carpenter. Would we get to see Complete-Game-Shutout Carp, or would this be Out-of-Gas-on-Short-Rest Carp? 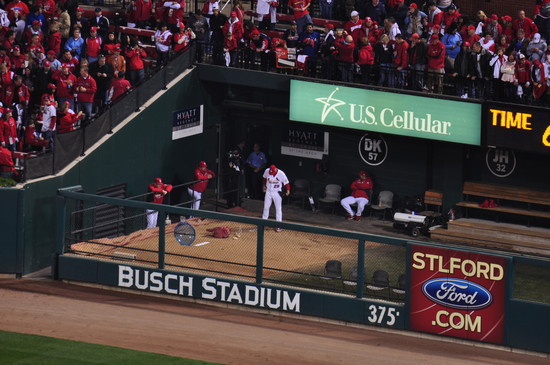 Carpenter was shaky in the first inning, giving up two quick runs. The Rangers showed that they were still in this thing. A couple of Rangers fans in my section produced some obnoxious hollering. 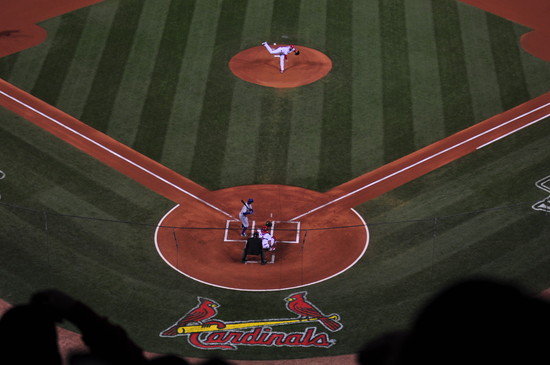 The crowd didn't seem too upset about the two-run deficit, however. It would be only fitting that the Cardinals would have to mount yet another comeback.

We didn't have to wait long. The stadium erupted after Freese tied the game in the bottom of the first. It erupted again when Allen Craig gave the Cardinals the lead -- for good -- with a solo home run in the 3rd.

Carpenter looked much sharper in the later innings, even winning style points for some big strikeouts. We were getting to see Doesn't-Have-His-Best-Stuff-But-Still-Pitches-Like-An-Ace Carp. The Rangers pitchers, meanwhile, struggled with command throughout the game. Meetings on the mound were common. 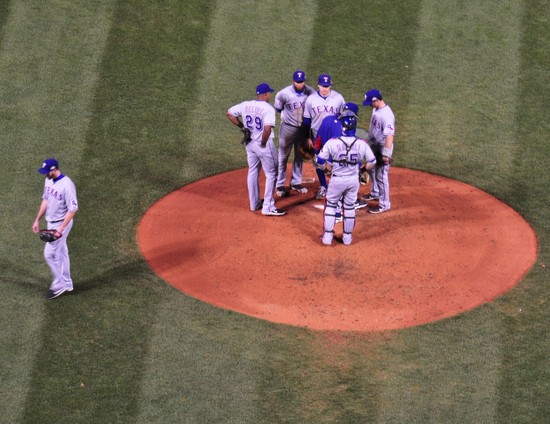 Thanks to walks and two hit batsman, the Cardinals scored two runs in the 5th without a single hit. Nobody wanted to say it out loud to avoid jinxing the situation, but it was clear that Texas was toast. 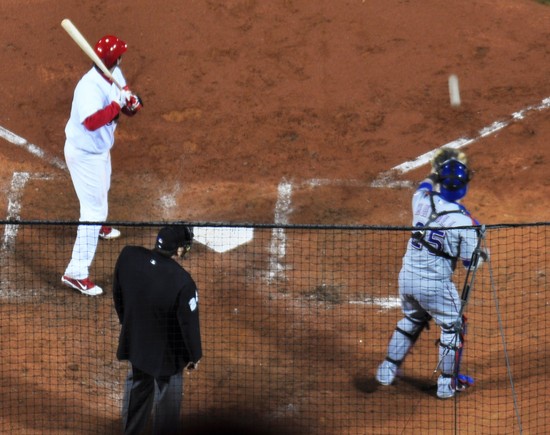 Their doom was even more apparent in the 6th inning when Craig leaped above the wall to rob Nelson Cruz of a home run. It was nice that Endy Chavez was able to see that play.

By the 9th inning, with the Cardinals enjoying a four run lead, the crowd was in a frenzy. Sure, it was still possible for the Rangers to pull off an epic comeback -- the Cardinals had done it, twice -- but nobody really believed that would happen. Jason Motte pitched like Jason Motte instead of Ryan Franklin, blowing away the Texas Rangers in a surprisingly short 9th inning, thank God. 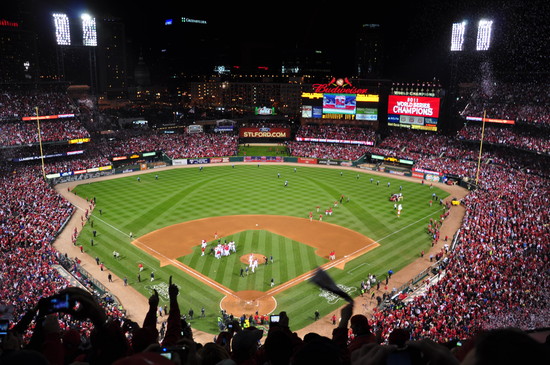 The next few minutes are a blur. The players rushed the field... 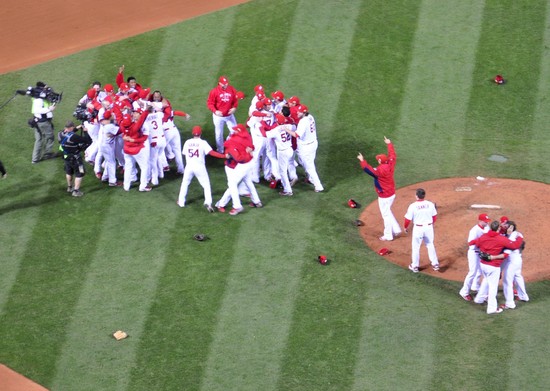 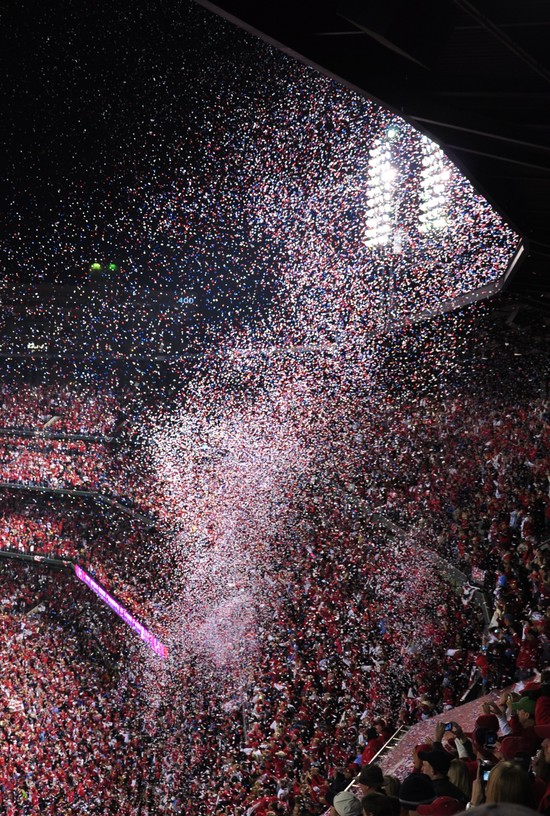 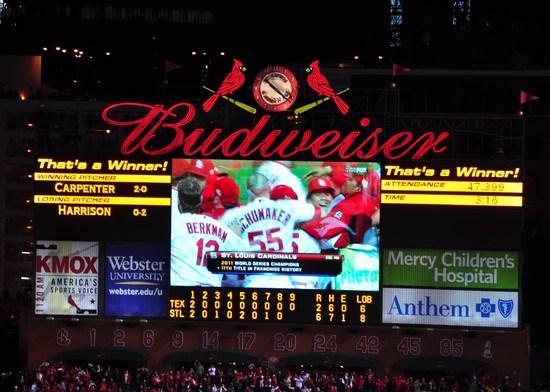 ...a Corvette appeared on the field... 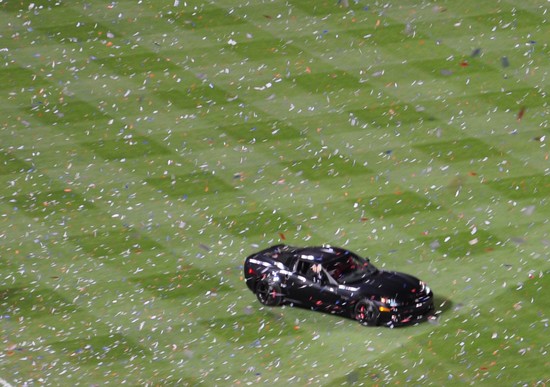 ...and then the fireworks came. 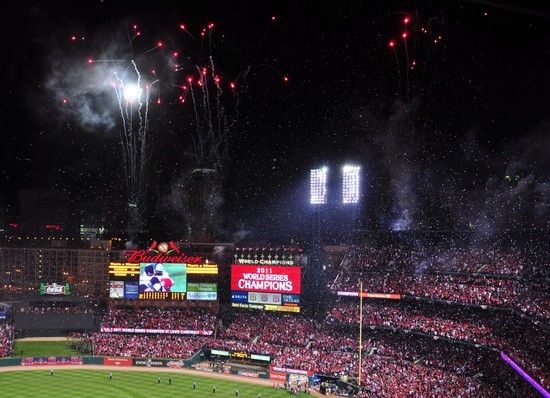 The concourses and standing-room only areas were jammed as fans tried to edge closer to the field. 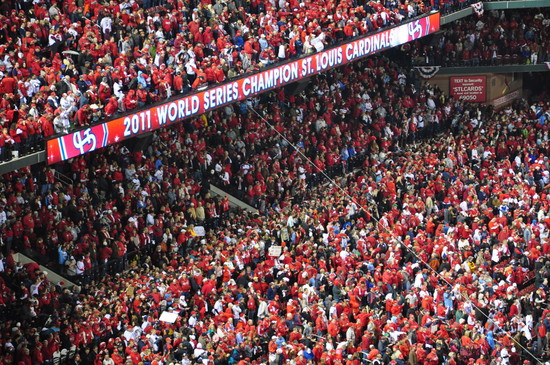 The players continued to celebrate despite an unexpected rain shower. The rain delay before Game 6 was a crucial part of the series, so nobody was going to complain about getting wet. 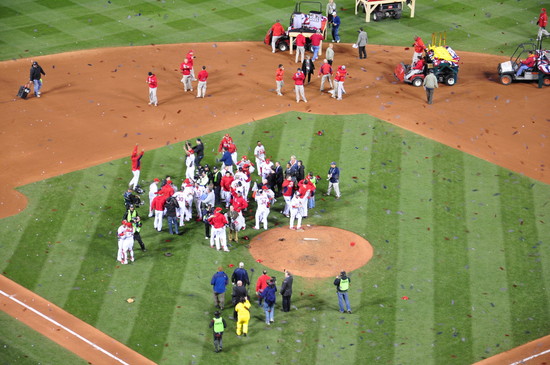 After the presentation of the World Series trophy, the Most Valuable Player award (with Corvette) was given to -- no surprise -- David Freese. 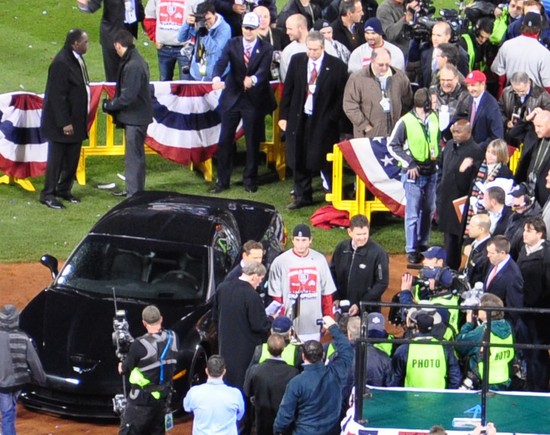 Few people, except for the very dejected Rangers fans, wanted to leave their seats. The crowd finally started to disperse, high-fiving everybody in sight along the concourses. An impromptu receiving line had formed outside Gate 5, high-fiving each person that came out of the stadium. 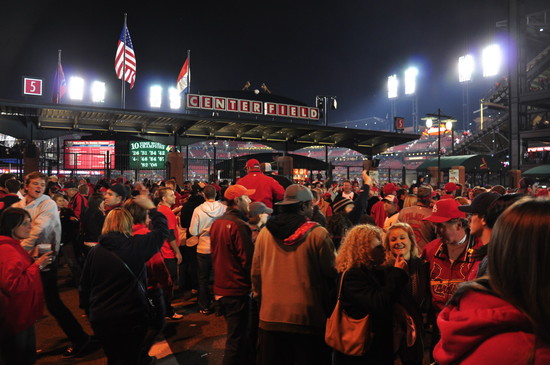 The ESPN broadcasters were sitting on a stage just outside the gate, but I'm not sure how they could possibly broadcast with the never-ending shouts of "WOOOOOOOOOO!" in the background. 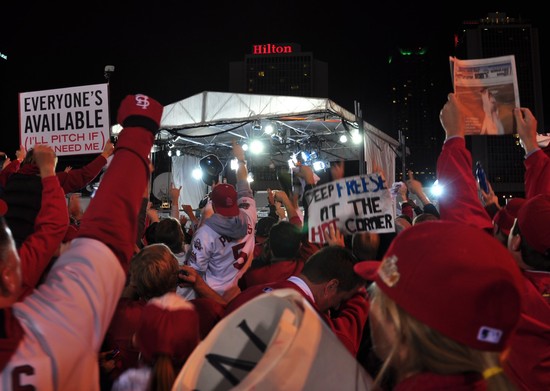 Even after a couple hours, the lower levels of the stadium were still packed with people. 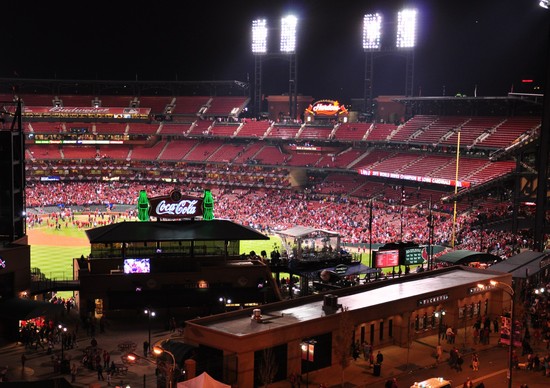 And who could blame them? The Cardinals had just put on a show for the ages. The season was officially over, but the crowd wanted to savor the moment. Yes, there would be a parade in a couple days, but that would be followed by every baseball fan's torment: the long, dark offseason.

At least, however, there won't be any more distractions for awhile.