More than you wanted to know about Bird's Point (Part 3) 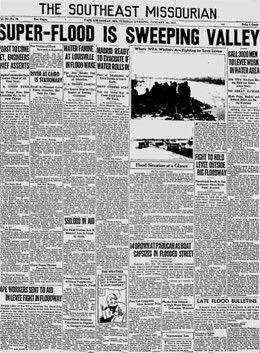 At least we have one reason to be thankful: The ice storms and floods didn't occur at the same time.

In 1937, that's exactly what happened. January brought winter storms, followed by rainstorms, and then more winter storms. The rain caused flooding, while the ice storms caused power and telephone outages. Coming in the middle of the Great Depression, it was a perfect recipe for widespread misery.

Headlines from the Southeast Missourian grew more desperate as January 1937 unfolded and the seriousness of the situation became more clear.

"SLEET COVERS AS STORM HITS CAPE DISTRICT," announced a small story on the front page, Jan. 9, 1937. "Dropping over night from 65 to 39 degrees, the temperature caused falling rain to begin freezing at 3 a.m. today and this was followed by an inch of snow and sleet."

Then, on Jan. 11: "WINTER SQUALL HOLDS DISTRICT IN SLEETY GRIP -- Kennett Without Water, Power or Telephones as Storm Hits."

By Jan. 14, the newspaper gives the first hint of trouble from flooding. "FLOOD THREAT BALKS TRAFFIC OVER DISTRICT -- Two Inches of Rain and Melting Ice Bring Streams Out of Banks." In a scene that has been repeated many times since, "road closed" signs were erected at Dutchtown.

Things start getting ugly by Jan. 15. "CLEAR CREEK LEVEE GOES OUT," announces the large-type headline. Breaks at the levee near McClure inundate nearly 10 square miles of farm land. In another all-too-familiar story, "POPLAR BLUFF FLOOD VICTIMS VACATE HOMES." The AP story reports, "Floodwaters of the Black and St. Francis Southeast Missouri's twin rivers, spread to new districts today as the sun came out for the first time in nearly a week and the mercury sank to around freezing."

Jan. 18: "FIGHT TO SAVE DIKE AS FLOOD GAINS GROUND -- Hundreds of Volunteers Join WPA Workers in Feverish Battle -- DANGER IS SHIFTED -- Senath Levee, Sandbagged, Expected To Go Out Shortly." The flooding in Dunklin and Butler counties is called "unprecedented."

That last bit was quite an understatement, as the flooding on the Ohio River warranted much more than just "some concern." On Jan. 21, the top headline announced, "INDIANA VILLAGE UNDER 12 FEET OF WATER WHEN RIVER LEVEE GIVES WAY." To make matter worse, another winter storm was arriving: "STATE IN GRIP OF ICE AS COLD WAVE ROARS IN."

By Jan. 22, it appears that the New Madrid Floodway might be activated. "FLEE FLOODWAY DISTRICT -- RESIDENTS IN AREA ADVISED TO QUIT HOMES -- Birds Point-New Madrid Spillway May Be Flooded By Overflow." Meanwhile, Cape Girardeau digs out from a "severe winter blizzard."

It all comes to a head by Jan. 25. "CITIES INUNDATED BY OHIO FLOOD," screams the full-width headline. "RIVER LEVEE AT BIRDS POINT IS BLASTED AFTER 18 BREAKS COME -- U.S. Engineers Dynamite River-Side Embankment to Aid Cairo." Cairo mayor proclaims that all "women, children and feeble should evacuate immediately." At Cape Girardeau, the latest ice storm damages hundreds of trees and takes out over 600 phone connections.

The headline on Jan. 26 speaks for itself: "SUPER-FLOOD IS SWEEPING VALLEY." Every story on the front page is related to flooding. The first story is titled, "WORST TO COME YET, ENGINEER CHIEF ASSERTS."

Then, on Jan. 27: "ARMY TAKES OVER FLOOD BATTLE." A large photo is printed showing damage in the floodway.

It just keeps getting worse. Jan. 28. "CREST ROARS DOWN SWOLLEN OHIO -- RIVER BEGINS RISE AT CAIRO; CREST SUNDAY." One story in the corner states, "No Added Compensation for Land in Floodway Covered With Water."

Jan. 29: "FLOODWAY IS READY FOR BIG TEST -- TOP STAGE FOR STREAM NEARS, LEVEES RAISED." This edition includes several stories and photos about the refugees from the floodway.

The crest takes its sweet time in coming. On Feb. 4: "FLOOD TO GO OUT SLOWLY -- NO WAY TO TELL WHEN WATER TO LEAVE DISTRICT -- Engineers See Crest at Cairo Remaining for 12 Days."

By Feb. 5, the headlines aren't quite as dire. "SLIGHT FALL IN RIVER AT CAIRO, NEW MADRID AS CREST PASSES." Refugees at Cape Girardeau start to head back home.

Over the next few days, the flood headlines dwindle as the newspaper returns to coverage of more mundane events. The big national story is a strike at General Motors.

Of course, the recovery from the flood, especially in the New Madrid Floodway, was only just beginning. Check back for Part 4 of this series as farmers in Mississippi County move back to the floodway and encounter giant rats, floating pianos, and the threat of yet another flood only three months later.