With the removal of its deteriorating white panels, the Bald Knob Cross near Alto Pass, Illinois, has taken on a whole new appearance. 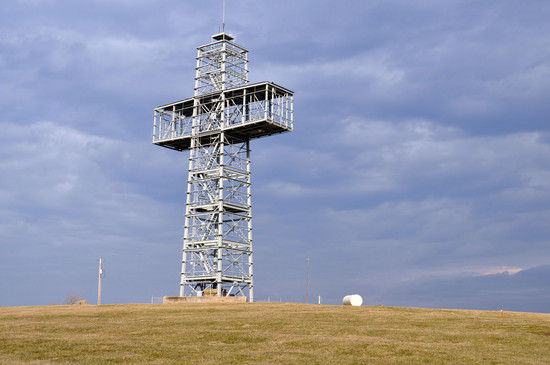 The exposed framework of girders is vaguely similar to the Eiffel Tower in Paris. Now that the details of the cross' construction are plainly visible, the structure is actually more impressive than ever. At 111 feet tall, it's an engineering masterpiece and an "Almost Wonder of the World". 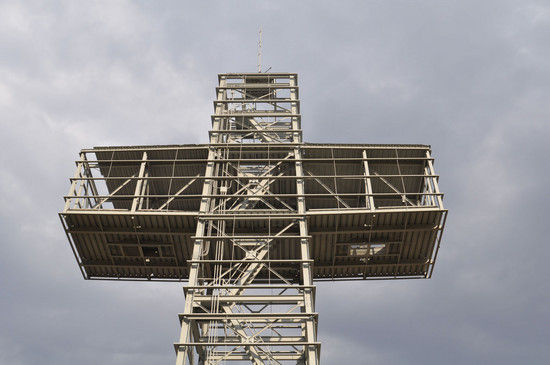 Unfortunately, from a distance, the cross in its present form just looks like a big communications tower. Intense fundraising is underway to replace the white porcelain panels and restore the monument to its former glory. 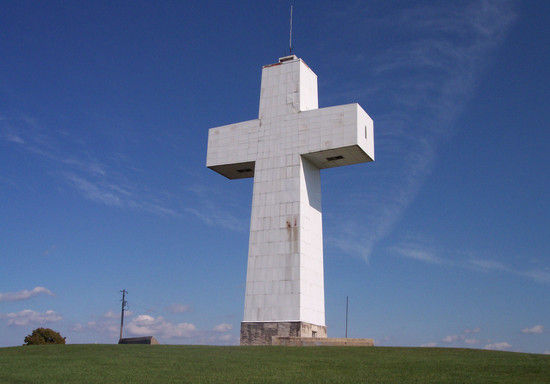 (In 2007, the panels were showing signs of rust, but the cross still looked pretty good. The restored version promises to look even better.)

Seeing the cross is only half of the reason to take the long drive to the top of Bald Knob. The panoramic view is always worth the drive. The summit of Bald Knob is not the highest point in Southern Illinois, but it is arguably the most conspicuous. 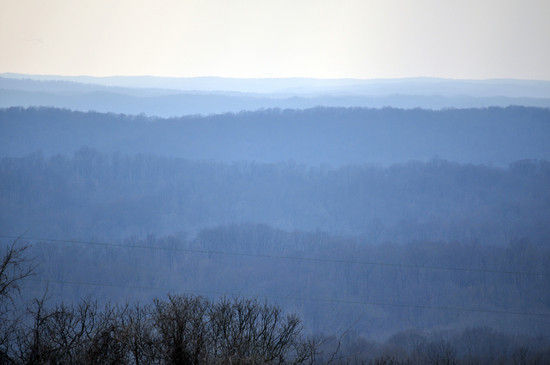 The view to the southeast includes Iron Mountain. 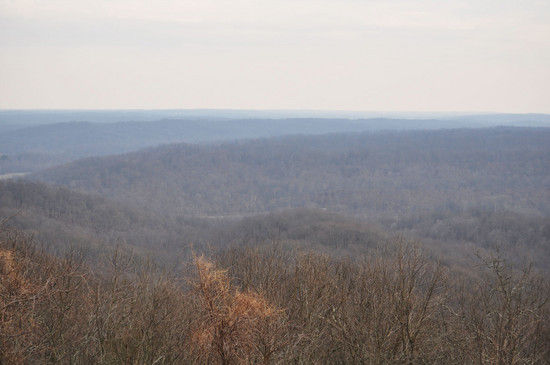 Looking southwest, it's possible to see all the way to Fruitland, Missouri. When I visited a few weeks ago, the air was particularly hazy, but it was still barely possible to see the Fruitland water tower (on the right) and the reflection from the pavement of Highway 177 (the curved streak on the left). 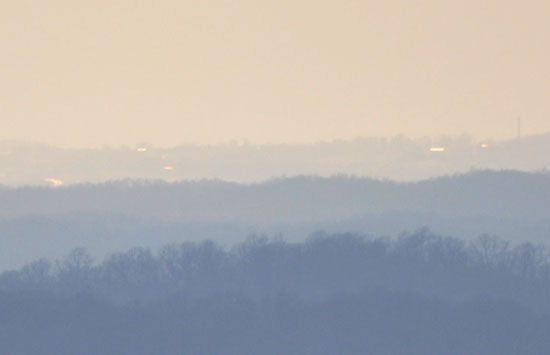 According to Google Maps, the crow-fly distance shown in this photo is roughly 17 miles. That's a lot of crow flying.

From Cape Girardeau, cross the Emerson Bridge and follow Highway 146 as it turns left at Highway 3 and then right at Ware. Make a left on Highway 127 and continue north to the overpass at Alto Pass. Turn right and follow the weird "cloverleaf" ramp around. At the stop sign, turn right on Milligan Hill Road to cross the overpass. After a short distance, bear left at the fork in the road to reach Bald Knob Road. This winding road eventually reaches the summit.

Sharon Sanders, librarian here at the Southeast Missourian, forwarded some photos that photographer G.D. "Frony" Fronabarger took during construction of the cross. These would have been taken sometime after the groundbreaking in 1959, but before the white panels were installed in 1963. 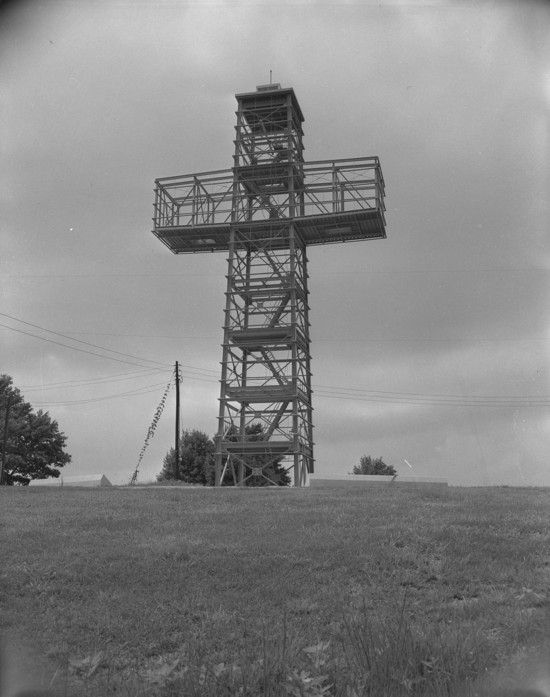 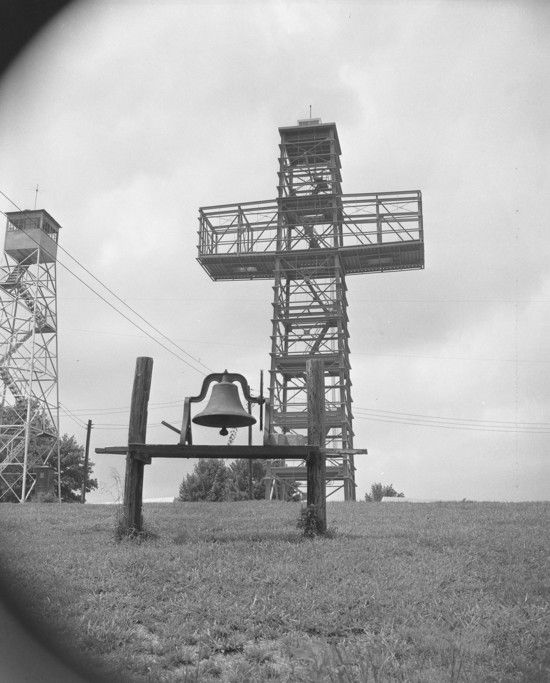 I never knew that the Forest Service had built a fire observation tower on the top of Bald Knob. In the photo below, the fire tower staircase wasn't blocked, so it appears that the tower was still open for climbing. 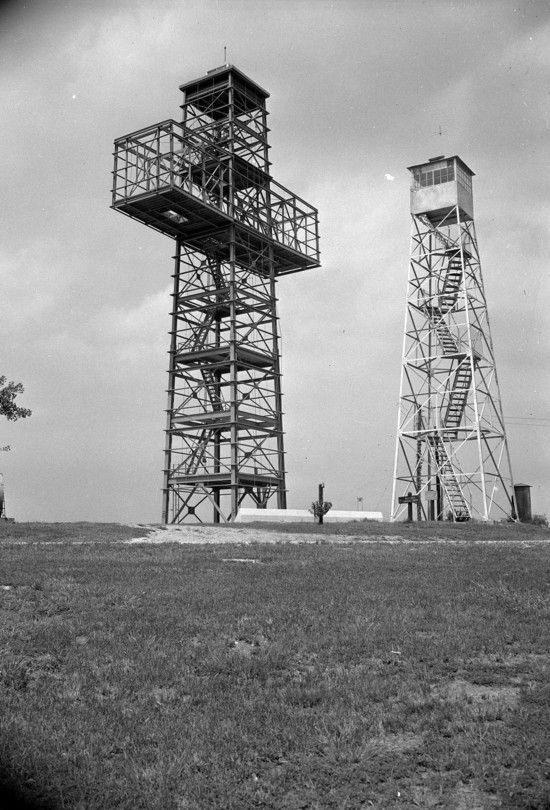