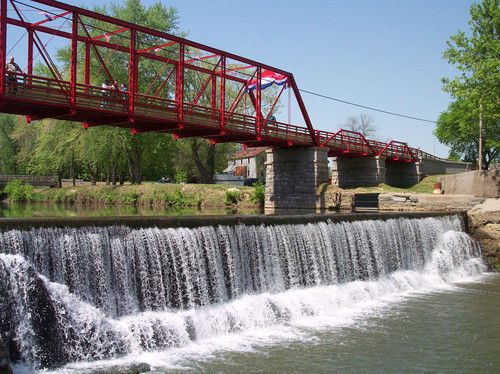 It has taken almost 27 years, but the Old Appleton Bridge, one of the oldest bridges in Southeast Missouri, has been listed on the National Register of Historic Places. The announcement came today when the National Park Service published their weekly list of actions.

According to an article in the old Bulletin Journal, paperwork for nominating the bridge had been completed as far back as 1982. However, for reasons that are not explained, the original nomination was never submitted. (Procrastination, perhaps?)

Then, on December 3, 1982, heavy rains sent a flash flood down Apple Creek, pushing the bridge into the water. Many towns would have immediately given up following such a disaster, but Old Appleton rallied to put the bridge back together. Little did they know that more setbacks were coming, holding back the bridge's restoration until 2005.

Another flash flood in 1986 wiped out the McClain Mill which once stood next to the bridge. The community pushed ahead with the bridge restoration, despite the huge void left by the missing mill. 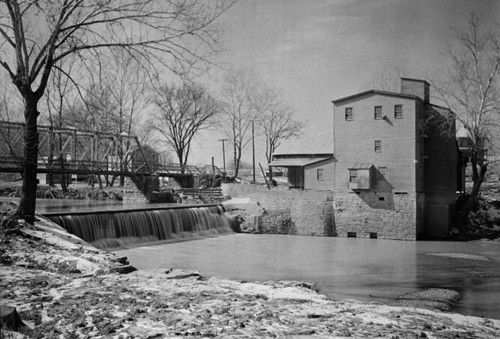 This photo, courtesy of the Library of Congress/Historic American Buildings Survey, shows the bridge and mill from 1939.

By the 1990s, the wrought-iron girders for the bridge's main span had been re-assembled. The bridge was back together again, even if it didn't span anything but weeds. 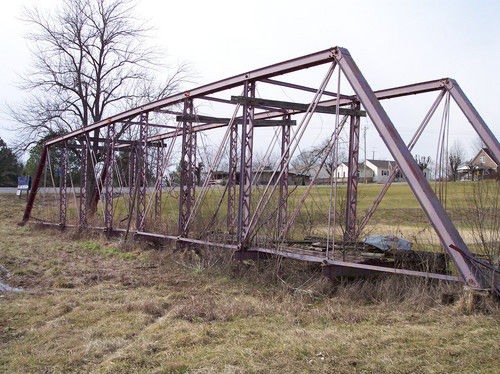 After years of waiting, the stage was finally set in the Summer of 2005 to install the bridge back to its rightful place. Enough money had been raised from local donations and government grants to hire a contractor, A.E. Simpson Construction of Scott City, to finish the job.

First, the two smaller approach spans were lifted into place on top of the new-and-improved piers. 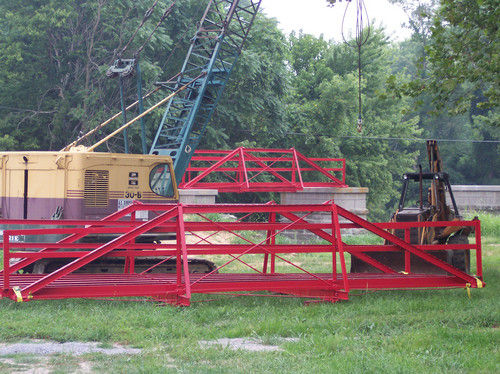 Then, a barge and crane were used to carefully hoist the main span into position on Sept. 23, 2005. 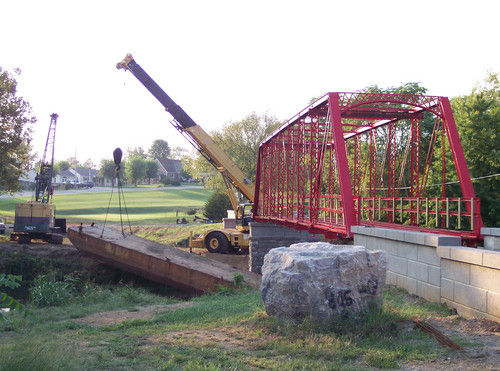 With a new paint job, the bridge looked better than new. 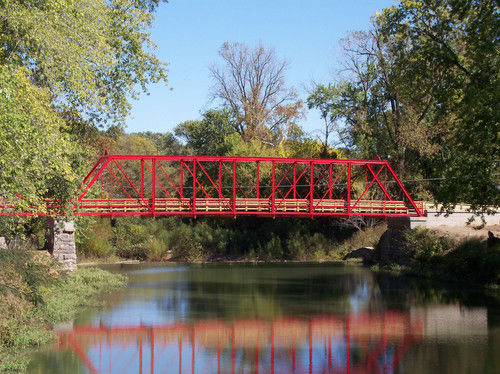 A formal dedication ceremony was held Apr. 22, 2006, including the obligatory ribbon cutting. 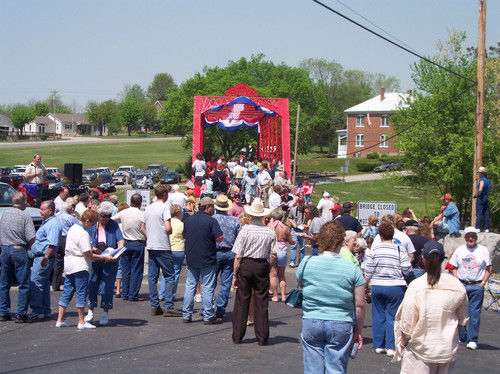 The celebration also included a parade of vintage cars. To preserve the bridge's longevity, it is only open to pedestrians and bicyclists, although, as the parade demonstrated, it is more than capable of carrying light traffic. 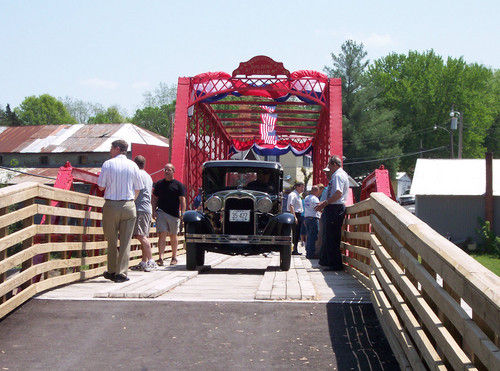 It wasn't possible to save all of the original iron thrown into the water by the flash flood, but the vast majority of the bridge was constructed from authentic material. This isn't a re-creation of a lost bridge, it's the real thing. One spare girder was reused to support a birdhouse next to the bridge and mill site. 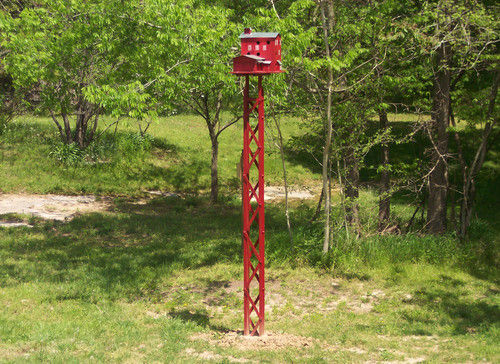 The plaques on the bridge proudly proclaim that it was constructed by H.W. Sebastian & Co. of St. Louis in 1879. Sebastian also built a similar, but slightly newer, bridge that still stands in Columbia, Mo. The company later became the St. Louis Bridge & Iron Co and built many bridges across Missouri, a handful of which still survive. 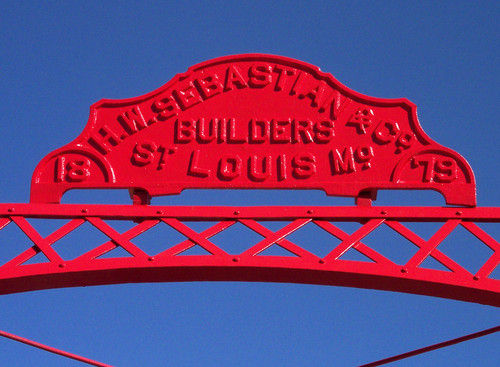 Old Appleton Bridge isn't the oldest iron bridge in the state (it's beat by the 1875 Windsor Harbor Bridge), but it is believed to be the oldest wrought-iron highway bridge still in its original location in Missouri.

In some ways, the Sebastian Co. was ahead of its time. The design is almost indistinguishable from other bridges built through the 1910s, except that Old Appleton employs wrought iron instead of steel, which became popular about 15 years later. Compare this 1879 bridge with one from 1915, and it might be hard to tell them apart.

Based on its early construction date and ahead-of-the-curve design, the Old Appleton Bridge is the perfect addition to the National Register of Historic Places. It's nice to see that the damage from the 1982 flood has finally been undone.