It is impressive, indeed. But the largest? That seems doubtful. 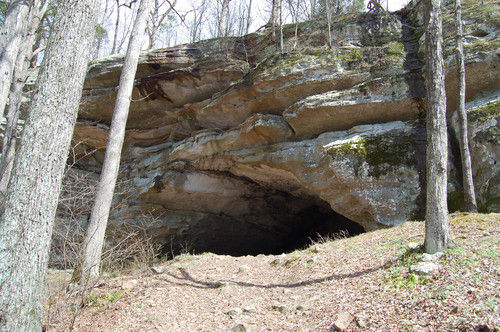 The Shawnee National Forest is filled with sandstone rock shelters that are massive, but could hardly be called caves. Sand Cave, however, really does live up to its name. The mouth opens up into a deep chamber that leads straight into the bluff: 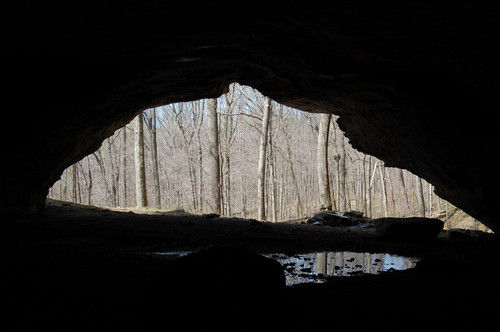 With a level floor, vaulted ceiling, and spacious dimensions, Sand Cave would make for a fine house. 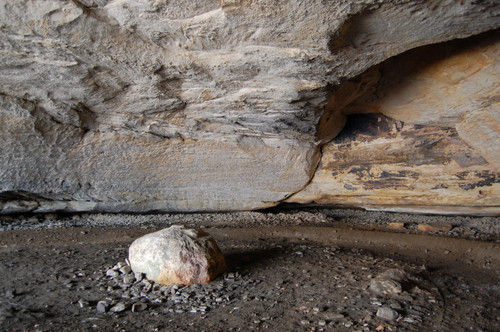 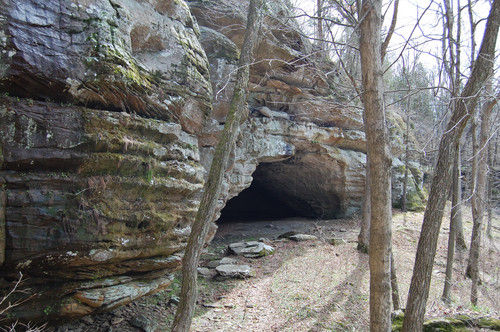 What the tourist brochures don't mention -- and they should -- are the other curious rock formations located just past the cave. Going north along the bluff line, you'll find a vertical wall coated with trickles of water: 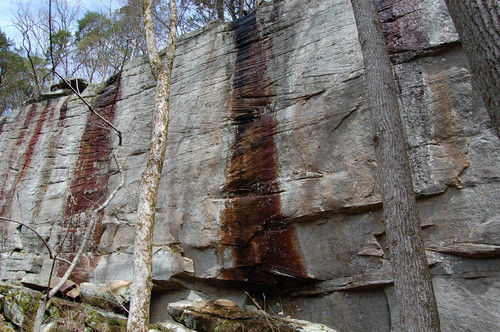 Then a jumble of rocks that have collapsed and separated from the bluff: 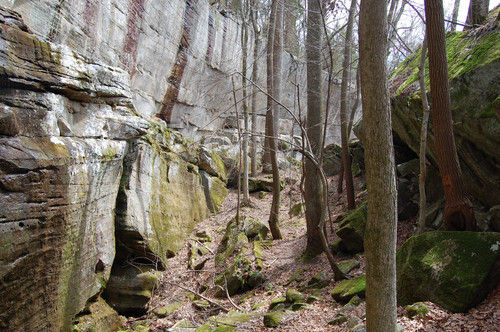 Followed by a rock shelter formed by a wall leaning at an impossible angle: 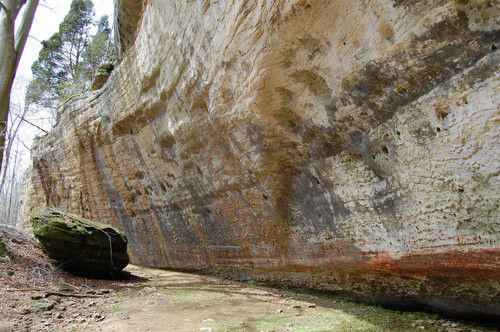 Which gives way to an even larger rock shelter: 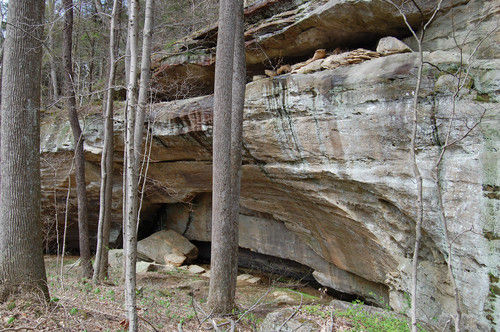 Before the bluff starts to shrink in size and finally peters out: 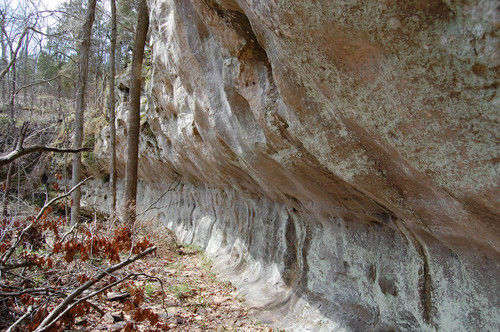 The whole area is a playground of nooks and crannies among the crazy rock formations. Like many places in Southern Illinois, this playground has the obligatory "Fat Man's Squeeze": 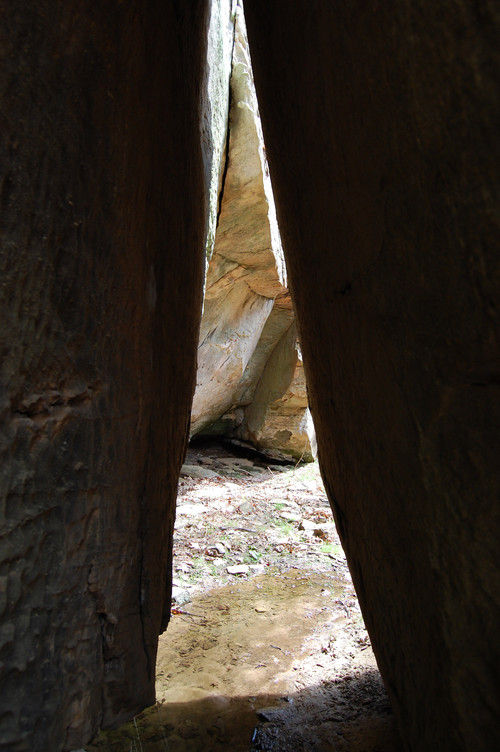 Unlike other areas, the rocks here are not covered in graffiti (mostly). The weird colors and textures are natural: 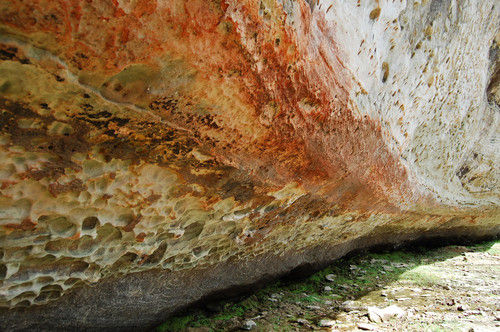 I'm still skeptical about the "largest in North America" claim for Sand Cave, but the cave and surrounding rock formations easily make it one of the more interesting places to visit in Southern Illinois.

These directions are a bit tricky, but as I recently noted, Pope County has joined the rest of civilization and posted high-quality road signs.

2. Continue through Vienna and go through the interchange with Interstate 24. Just beyond the underpass, look for the turnoff on the left for Highway 147.

3. Follow Highway 147 for 12.5 miles through the tiny towns of Simpson and Robbs.

4. Just before reaching the intersection with Highway 145, look for the turnoff for Cedar Grove Road on the left. (Google Maps shows the wrong name.) Take this paved road north and east for 3.7 miles.

5. Turn left on the appropriately named Sand Cave Road. If you reach Cedar Grove Church on the right, you've gone too far. Sand Cave is the first turnoff south of the church.

6. Take Sand Cave Road for a short distance until the pavement ends and the road makes a sharp curve to the right just past a National Forest boundary marker.

7. Look for the faint road that continues straight ahead, but is blocked by brush and downed trees. This is actually the beginning of the trail. Typical for the Shawnee National Forest, there's no sign marking the trailhead or any attempt to provide a parking area. There's just enough room to park one car (maybe two) without blocking the main road.

8. Hike along the old road, which makes a zigzag to the left and the right. Try not to get sidetracked by other trails.

9. Keep your eyes peeled for the "Natural Area" signs. Take the right fork in the trail, following close to the bluffs that appear on your right. These bluffs will eventually lead to the opening of the cave.

I recently discovered that the Forest Service has posted high-resolution topographic maps online, which you can grab for Illinois, Missouri and other states. The file format is rather inconvenient, but this beats paying $6 or $8 for each printed map.

I've stitched together the Stonefort and Glendale quadrangles to show the area around Sand Cave: 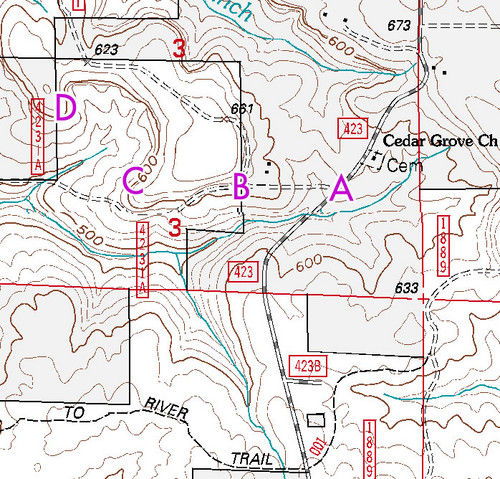 A. This is the turnoff for Sand Cave Road

B. Here is the trailhead and "parking lot"

D. The end of the bluffs, which curve around to form a horseshoe-shaped valley. The parcel of land to the west of here is privately owned.