Drive on the oldest concrete highway in Missouri

It may seem hard to believe, but Mississippi County, Missouri, has been a leader in civil engineering projects. The Charleston area has been home to three "firsts" in Southeast Missouri: the first railroad (Cairo & Fulton Railroad), the first major concrete highway (the Charleston-Birds Point road), and the first stretch of completed interstate (a short stretch of I-57).

The railroad is long gone and the interstate isn't that interesting. However, the old concrete highway is quite an amazing sight, featuring pavement that is almost 90 years old and yet remaining in surpringly good condition: 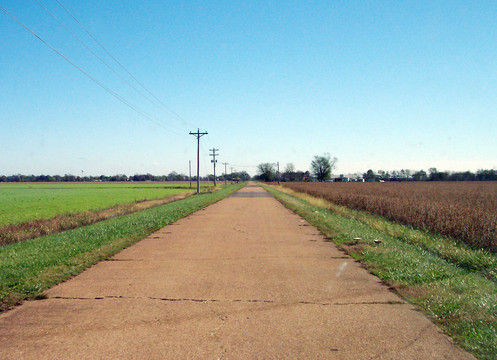 Other stretches aren't quite as nice, with many patches and cracks, but are still decent: 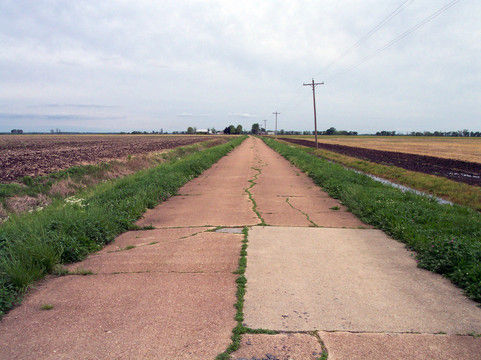 For something constructed in 1919-1921, I think the engineers and construction crews would be quite proud that their work has held up so well. If only our modern roads could be built with such longevity!

These first roads were designed in an era where cars had a top speed of 35 mph or less. This road only has a width of 16 feet with many sharp curves: 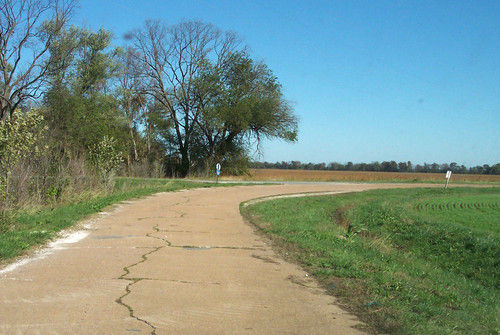 It also crosses a narrow bridge with a wooden floor. A plaque states this bridge was constructed in 1921: 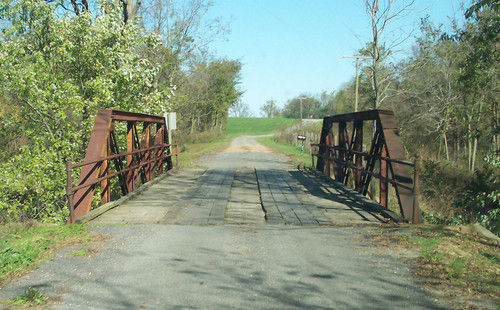 It didn't take long for this road to become obsolete as people wanted to drive faster. By 1938, most of the route was bypassed by a new-and-improved highway. This map from the 1930s shows both roads in operation at the same time northeast of Wyatt: 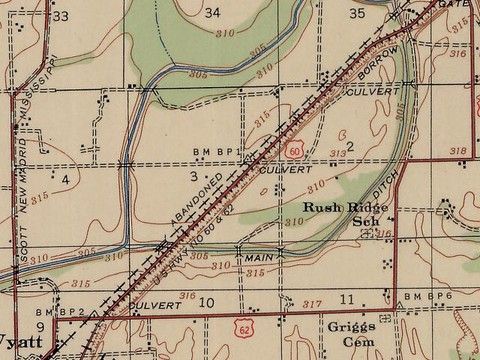 The route marked "60" was the new highway, while "62" marked the old, zigzagging road. Since then, most of the old highway has been relegated to county roads used only by locals.

The book History of Mississippi County Missouri: Beginning Through 1972 by Betty Powell offers this description of the highway project (page 83):

The first project inaugurated, known as 7-A, consisted of 15 1/2 miles of sixteen foot concrete pavement on the state road from Charleston to Bird's Point. A letting was held for the project October 1, 1919, with Roy L. Williams, Wyatt, being the low bidder, the contract price being $507,777.30. Clyde Swank was engineer for the project. The contractor installed equipment consisting of a steam shovel, a large mixer and an industrial railway plant to haul stone, sand, and cement to the work. The road was completed in November of 1921 and in December was finished at Three States, could transfer traffic to Cairo, Illinois. It was the first stretch of concrete highway in Missouri other than a three mile road between Kansas City and Independence, Missouri.

That road at Kansas City has probably been paved over numerous times, leaving the Charleston road as the oldest concrete highway in Missouri still carrying traffic. That may seem like an obscure achievement, but similar historic roads in Arkansas have been posted to the National Register of Historic Places. I don't see why the Charleston road couldn't also qualify.

I found more references to this project in the Southeast Missourian "Out of the Past" archives.

One of final steps in work preliminary to construction of Charleston-Birds-Point concrete road was accomplished Saturday when construction of industrial railway which will transport materials from Missouri Pacific tracks was completed into Charleston; railway is about two miles in length, being built from material switch put in on Cairo Branch, about one mile east of city limits, to Sixth street in Charleston, at which street construction of road is to begin.

Julien Friant, Eugene Hart and representative of this newspaper drive to Charleston to see new concrete road that is being built from Charleston to Bird's Point, opposite Cairo; nearly nine miles of road have been built and are now in use; crushed stone, sand and cement are unloaded from cars on side track short distance east of Charleston and dump cars are then loaded with correct mixture of each; motorcar hauls a train of dumpcars out over road to point where new road is being laid, where it is dumped into mixer and spread out on road by machinery.

It appears this was quite an undertaking, requiring the construction of a special railroad line. As the first project of its kind in Southeast Missouri, the construction process would have been quite a spectacle.

Located only a short distance east of Charleston, the old highway is a perfect scenic diversion to accompany the Dogwood-Azalea Festival this weekend.

This Google map shows the exact route of the highway, starting in Charleston and working its way in zigzag fashion to Birds Point:

Here are the directions for retracing the highway:

1. The road started at the intersection of Sixth Street and E. Marshall Street (US 62, the main drag) in Charleston.

2. If you take I-57 to Exit 12 (the US 60/62 exit), you can pick up the road on the east side of Charleston. Turn right (east). This highway follows the original road, but there's no original pavement left here.

3. Turn right (south) on Route JJ. The original road would have made a sharp turn here.

4. Turn left (east) on County Road 340. Soon you'll come to the original concrete pavement, 16 feet wide. This road is straight as an arrow until it suddenly veers left just before Highway 77. Follow the paved road into Wyatt and follow Main Street diagonally through town.

5. Main Street crosses Route EE (on the levee) before turning into Route HH. Continue straight on Route HH -- this road sits on the original concrete roadbed but has been resurfaced numerous times.

6. Make a left on County Road 307. This is the best part, with the original concrete pavement appearing again. The road curves right and then left on a pair of sharp corners.

8. Beyond the bridge, notice the gap in the concrete pavement where the big levee was constructed.Cross over US 60/62 and continue straight ahead on County Road 205. This is still the original road, but has been resurfaced.

9. The road intersects with Route K and zigzags to the right and left. Before reaching US 60/62 again, the old road veers left and follows a dead-end route to the river. This is where a ferry crossing to Cairo would have operated before the Mississippi River Bridge was completed in 1929.